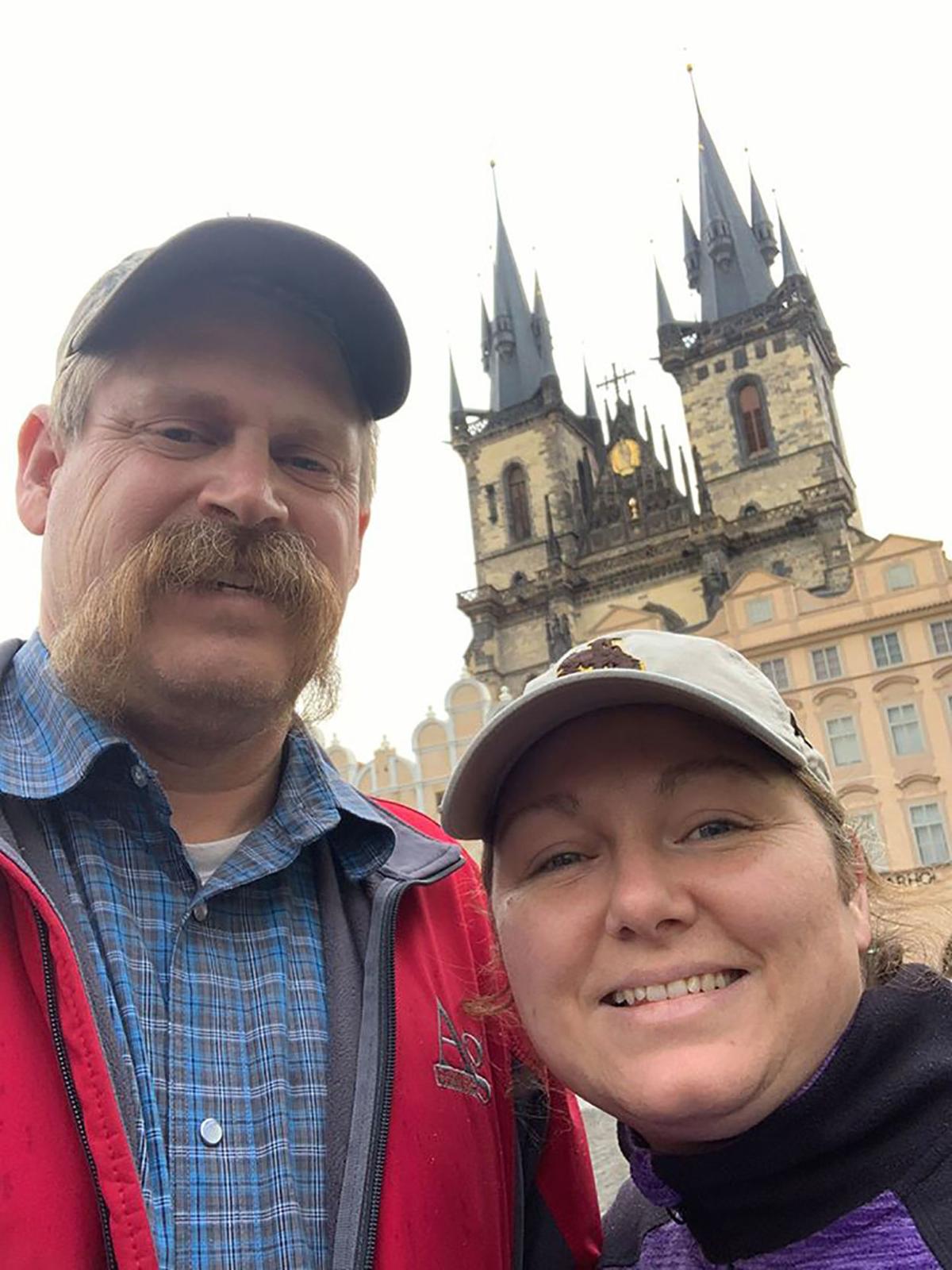 Jason and Nancy Dvorak of rural Brown County are on self-quarantine in their camper after a recent trip to Europe. 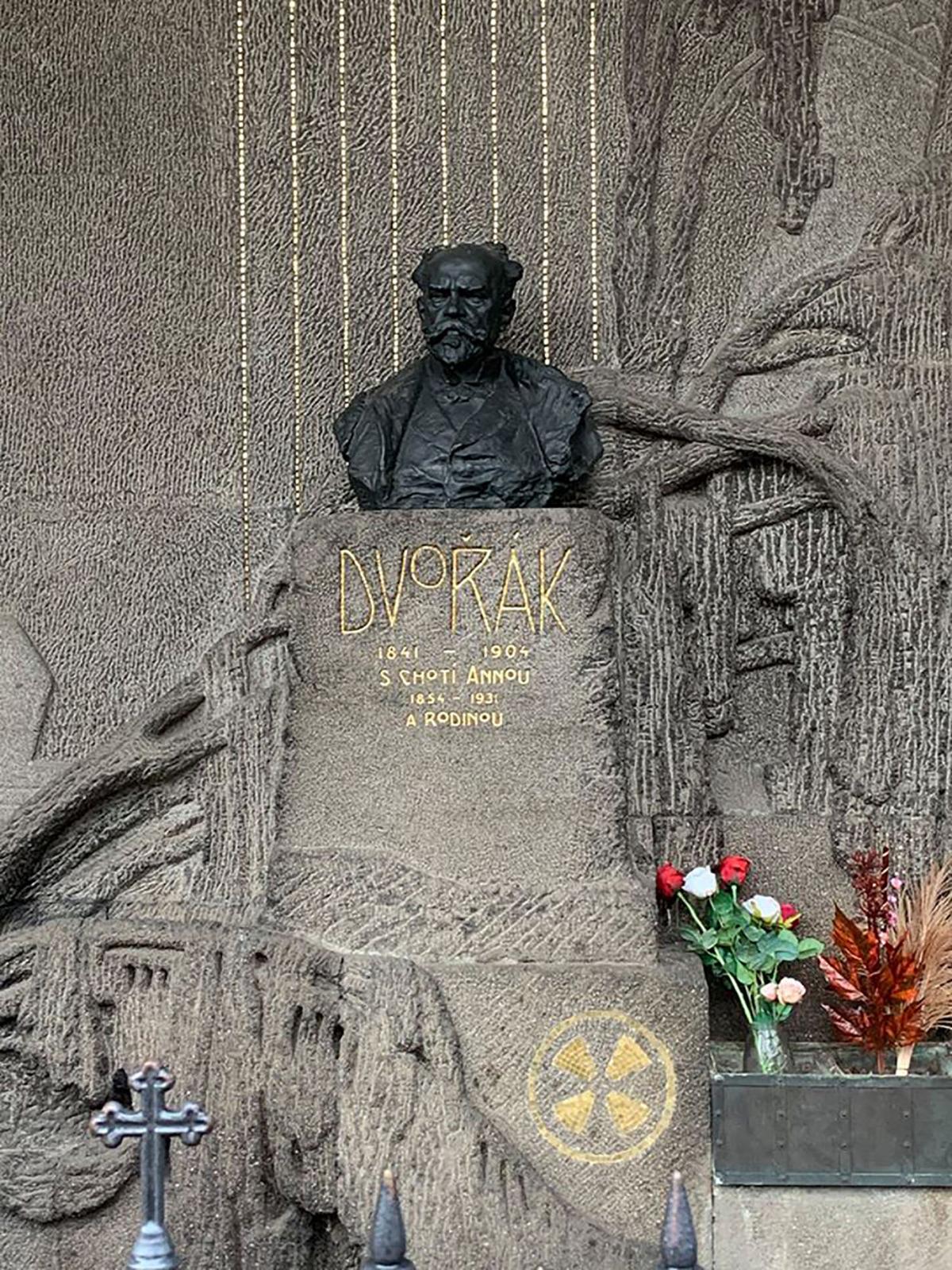 Another memorial of a possible ancestor to Jason Dvorak — Antonin Dvorak, a composer. 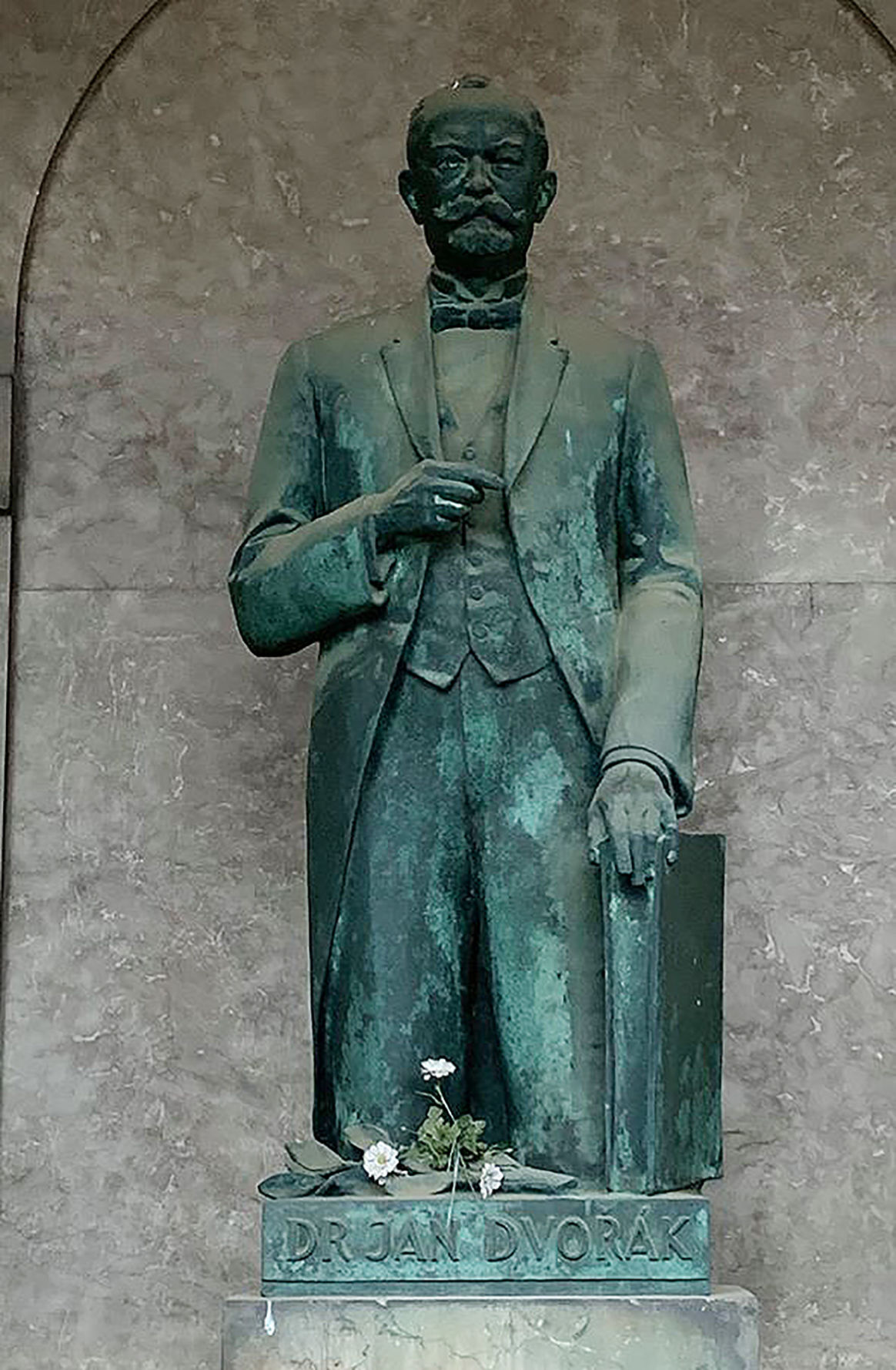 The Dvoraks found this memorial for Dr. Jan Dvorak — possibly one of Jason Dvorak’s ancestors — in Prague, Czech Republic.

Jason and Nancy Dvorak of rural Brown County are on self-quarantine in their camper after a recent trip to Europe.

Another memorial of a possible ancestor to Jason Dvorak — Antonin Dvorak, a composer.

The Dvoraks found this memorial for Dr. Jan Dvorak — possibly one of Jason Dvorak’s ancestors — in Prague, Czech Republic.

It was Day 3 in the camper and already isolation was business as usual for Jason and Nancy Dvorak.

Well sort of. This was Wednesday of this week.

The Dvoraks just returned from a work trip/vacation to Europe and in light of the state of emergency concerning the COVID-19 coronavirus, they have decided to self-quarantine in their camper at their rural Brown County home. In keeping with “social distancing” and quarantining guidelines, the Dvoraks agreed to a phone interview with the Hiawatha World from their camper.

The Dvoraks flew to France Feb. 29, arriving March 1 in Toulouse, where Jason had a week of work meetings with other colleagues from Winfield United, a subsidiary of Land O’Lakes. Nancy joined other wives who traveled to France as well and while their husbands were in meetings with clients from France, they were sight-seeing and enjoying the trip.

“Since we were on that side of the pond, we decided to stay an extra week and visit some areas where my ancestors came from,” Jason said.

The entire time they were in France, Jason and Nancy said they knew that the coronavirus was an issue, but it wasn’t to the magnitude that it is now.

“They were already practicing social distancing in France at work places,” he said.

“Over there they kiss on the cheek and they weren’t doing that,” Nancy added. “But otherwise, there were plenty of people walking around just doing their thing.”

She said they noticed a few people of Asian descent were wearing masks in public, but other than that there weren’t any issues they noticed – at least at the beginning of their trip.

So after several days of meetings and sight-seeing in Toulouse, France, the Dvoraks hopped a train to Montpelier, France along the French Riveria — a metropolitan area in the Mediterranean, which was very busy with tourists. Again, there wasn’t much news of the coronavirus. They took another train to an airport and flew to Prague, Czech Republic, where they hoped to find more about Jason’s roots.

Back in December, Jason’s father died and he began searching through the family tree. He traced his roots back to his second great-grandparents and a third great-grandmother, all three who came to the United States as immigrants in 1878 and settled in Nebraska, then to south-central Kansas near Marion, which is where Jason is from. Jason’s grandfather died in a farming accident before he was born, so he didn’t have the opportunity to ask him about the family. It was information on those great-grandparents that led Jason to begin an ancestry search and he was able to find their home on the internet, located near Prague.

So he and Nancy arrived in Prague early the week of March 9. They had fun learning about what possibly could be extended family members and ancestors by searching through cemeteries. In fact, they came upon two memorials for Antonin Dvorak and Dr. Jan Dvorak in a church cemetery.

Nancy said Antonin Dvorak was a musician and much of his music centralized around the land and small farmers.

“That’s what Jason does, so it was neat to find this connection,” she said, noting they are still working to connect to them through the family tree.

The name Dvorak was actually Anglicized in the immigration, and in old Czech spelling read as “Dvorka.” In addition, his grandfather’s middle name was “Wenceslas,” which was pronounced as “Venslav.”

Upon arrival, they found Wenceslas Square in the center of Prague – named after Duke Wenceslas, King of Bohemia and a patron saint who was killed by his younger brother at the age of 22 in 929.

Jason said he was intrigued by the connection in names, and so he is continuing to research back prior to his second-great grandparents.

The Dvoraks were set to locate his ancestors’ home southeast of Prague, but by then word of concern of travel and safety due to the coronavirus had set in. By Wednesday, March 11, President Trump had announced a travel ban from Europe.

Panic set in across the nation. The Dvoraks said they wouldn’t have really known about the concern if it weren’t for the onslaught of news on social media and other news media sources. He said not all of it was accurate. They were being contacted from friends and family back home, concerned they weren’t going to make it back into the country.

Jason said there was so much misinformation, that they set about finding out the real story. Nancy has a family friend who is a US congressman from Missouri so they text him. He told them not to panic, that U.S. citizens are still allowed to travel home, but the situation was changing rapidly and to probably get home soon. The Dvoraks were set to come home Saturday the 14th anyway, but begin checking into getting their flights changed. Already, price gouging had set in and they were going to be charged up to $3,400 if they changed tickets to leave a couple days early.

“We at first panicked a little, but then were like calm down and let God handle it,” he said.

By Friday, they had their flights confirmed and were set to leave, then heard their flights were canceled. They were able to get another flight, this one to the United Kingdom, which was considered a safe zone. From there, they initially were to fly back to Philadelphia, but were routed to Chicago. There, they were met by the Center for Disease Control and asked a few questions about where they had been, had they traveled to Iran or China, did they have any coronavirus symptoms and their temperature was checked. They passed inspection and were given the go ahead to for their connecting flight back home. And as they traveled, they read about guidelines and recommendations for people who have left the country.

So, upon arriving home, they decided to protect their family, friends and community by self-quarantining. It’s certainly not convenient and they miss everyone, but are taking it a day at a time.

Since Jason does much of his work from home, he is still able to do this from the camper and Nancy has been busy finalizing illustrations for a children’s book she is writing.

Although they are “roughing it” so-to-speak, Nancy and Jason do have a roof over their heads, a bed, food, and each other — but no running water in the camper. Jason said that with temperatures expected to dip below freezing this coming weekend he didn’t want to take a chance in un-winterizing the camper.

He said his daughter, Jocelyn, is bringing them meals and setting it on the camper steps, then running “like a maniac” back to the house.

“Problem is, she didn’t make sure the dog didn’t get our breakfast before she ran off,” he said with a chuckle.

Jocelyn, a junior at Hiawatha High School, is the only one of the Dvorak’s five children still at the house. Jason said the rest went to stay with Grandma in Missouri. Jocelyn stayed behind with her other grandma, Betty Dvorak, to take care of the livestock and pets while the Dvorak parents traveled to Europe. She didn’t plan to be taking care of their parents for another two weeks after their return home.

Jason said he called the bank to authorize them giving his daughter cash and a lady from church picked up Jocelyn to take her to town and get her parents supplies for the camper – including six big jugs of water.

“I couldn’t give her my debit card, for fear of any contamination,” he said.

Not seeing their children is the hardest part of the quarantine, but Jason and Nancy said they wanted to do what’s best and protect them and other people they would come in contact with from any germs that may have traveled home with them.

Jason said it’s also been frustrating to hear of others who also traveled out of the country not adhering to the Kansas Department of Health and Environment’s advice on self-quarantining.

The Dvoraks have until March 29 before they can rejoin their children and society in Brown County. By then, it will have been four weeks since they have had any contact with their children or anyone else local.

“I miss my kiddos,” Nancy said.

But just like the feelings they had when the news of the pandemic and travel bans came to them in Europe, the Dvoraks are trying to give their concerns over to God and taking their isolation one day at a time.

“There are entire countries that live in much worse conditions,” she said. “It’s like Andy Stanley (Christian author and minister) said, these are ‘rich people’s problems.’ We will get through this.”

And, just maybe, we will all come out stronger for living through it.