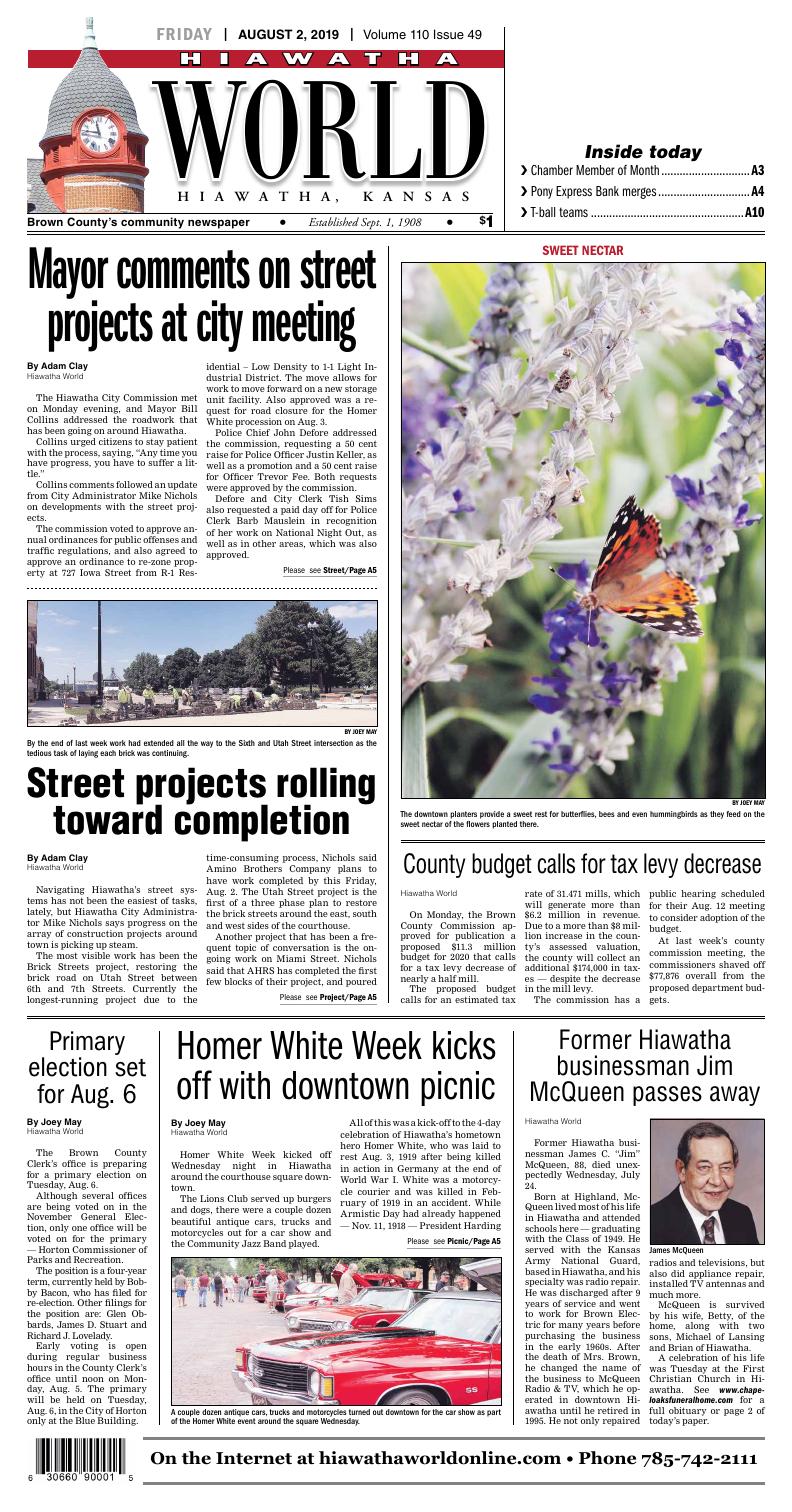 top story
Homer White Week kicks off with downtown picnic
Joey May  / By Joey May Hiawatha World
08.01.19
Photos by Joey May

This old time car, part of the Homer White car show downtown Wednesday night, offered a peek into what life was like in the 50s and 60s with a burger, fries and Coca-Cola to go, courtesy of a drive-in restaurant.

A couple dozen antique cars, trucks and motorcycles turned out downtown for the car show as part of the Homer White event around the square Wednesday.

The Community Jazz Band performed on the courthouse steps Wednesday night in Hiawatha as part of the Homer White Week kick-off.

Area residents lined up to enjoy grilled burgers and hot dogs, sponsored by the Lions Club, as part of Wednesday night’s Homer White event around the courthouse.

This statue of a soldier stood at attention and presided over the Homer White event downtown Wednesday night.

The Lions Club served up burgers and dogs, there were a couple dozen beautiful antique cars, trucks and motorcycles out for a car show and the Community Jazz Band played.

All of this was a kick-off to the 4-day celebration of Hiawatha’s hometown hero Homer White, who was laid to rest Aug. 3, 1919 after being killed in action in Germany at the end of World War I. White was a motorcycle courier and was killed in February of 1919 in an accident. While Armistic Day had already happened — Nov. 11, 1918 — President Harding didn’t sign Congress’s resolution declaring the war had ended until July 1921, so the U.S. still had a military presence there until then.

White’s family raised money to bring him home for burial and he was laid to rest at Hiawatha Cemetery following a large funeral procession that involved much of the community.

In an effort to celebrate White’s sacrifice 100 years ago — and also celebrate the 100th anniversary of the American Legion — the Homer White Post 66 in Hiawatha planned this celebration.

Other activities included Thursday night’s picnic at the Brown County Historical Society’s Ag Museum. Friday night will be a dinner starting at 6:30 p.m. at the Fisher Community Center in Hiawatha. Everyone is welcomed for great food, social sharing, history replayed by special guests and a Homer White remembrance. No RSVP is necessary and the dinner is a freewill offering.

The winner of the downtown window-decorating contest will be announced at the dinner.

On Saturday will be a Patriotic Procession at noon, from the courthouse square to the Hiawatha Cemetery — following a Color Guard, a flag-colored caisson, horse-drawn wagons and riders, military vehicles, Legion Patriot Riders, Christian riders, bicycle riders and walkers.

The community is invited to come out to the banquet and to not only watch the procession, but join in as well.

The Hiawatha City Commission met on Monday evening, and Mayor Bill Collins addressed the roadwork that has been going on around Hiawatha.

Collins urged citizens to stay patient with the process, saying, “Any time you have progress, you have to suffer a little.”

Collins comments followed an update from City Administrator Mike Nichols on developments with the street projects.

The commission voted to approve annual ordinances for public offenses and traffic regulations, and also agreed to approve an ordinance to re-zone property at 727 Iowa Street from R-1 Residential – Low Density to 1-1 Light Industrial District. The move allows for work to move forward on a new storage unit facility. Also approved was a request for road closure for the Homer White procession on Aug. 3.

Defore and City Clerk Tish Sims also requested a paid day off for Police Clerk Barb Mauslein in recognition of her work on National Night Out, as well as in other areas, which was also approved.

Sims presented the idea of an Employee of the Month award that would come with a day off, which the commission approved, but with the stipulation that it be moved to Employee of the Quarter.

Street Superintendent Nick Siebenmorgen spoke the commission, first receiving permission to seal cracks in Oregon from First Street to the railroad tracks at a cost of approximately $8,000. Siebenmorgen was then directed to pile unusable bricks from the Utah Street project at the dump. He then informed the commission that chip and seal work would begin in mid-August on Hatfield, Green Court, Wentley, Navajo, Cheyenne and Cherokee Streets.

Nichols reported for Water Superintendent Brad Scott that work on water mains had crossed 8th Street and the project should be complete within two weeks. Nichols also announced that the Lieutenant Governor would be holding a public forum next Monday in Sabetha, but that it would coincide with the city meeting the same night.

In other business, the commission approved the Consent Agenda, which included an appropriation of $58,068.48, utility refunds of $187.78 and a contractor license for FCR Home Improvement, LLC.

City Clerk Sims read a proclamation declaring National Night Out for Aug. 6. The Commission approved the dates of Aug. 5 for the fire department pool party, and the 7th for the City Employee pool party.

By the end of last week work had extended all the way to the Sixth and Utah Street intersection as the tedious task of laying each brick was continuing.

The newly laid brick street in the 600 block of Utah is about ready to be open, as contractors anticipate work to be completed on Friday, Aug. 2. The street renovation was part of the city sales tax street project and started the first week of April with a total replacement of the bricks and intersections at Sixth and Seventh streets.

Navigating Hiawatha’s street systems has not been the easiest of tasks, lately, but Hiawatha City Administrator Mike Nichols says progress on the array of construction projects around town is picking up steam.

The most visible work has been the Brick Streets project, restoring the brick road on Utah Street between 6th and 7th Streets. Currently the longest-running project due to the time-consuming process, Nichols said Amino Brothers Company plans to have work completed by this Friday, Aug. 2. The Utah Street project is the first of a three phase plan to restore the brick streets around the east, south and west sides of the courthouse.

Another project that has been a frequent topic of conversation is the ongoing work on Miami Street. Nichols said that AHRS has completed the first few blocks of their project, and poured 500 block of Miami, running partway into 600 block, with the elementary school bus parking lane planned for pouring on Tuesday, and the north lane later this week. The contractor has assured the city that work near the school will be completed a week before school starts.

AHRS currently has a subcontractor working on 4th Street, as well. The road has been torn up from Miami Street to Cheyenne. Rock will be poured over the first portion of Miami, then work will continue down to Green Court. To facilitate passage around the street, a temporary access road has been constructed from the Vintage Park south parking lot to Kansas Street, while another access road will be constructed from Wentley Drive to Hatfield for residents of Wentley and Woodlawn. Nichols has also been assured that the Hiawatha Plaza Apartments will have full access to at least one side of their drive at all times during the project. The final pour will be done in two days and is planned for a date around Aug. 12.

Other projects starting soon include work on Shoshone Road, where J&B Contractors will begin work to replace the street in early August. On Third Street, city crews have already milled the road between Iowa and Kickapoo Streets, where drainage issues have been addressed. Next, the city will take bids to finish the project, and work likely will begin in September. 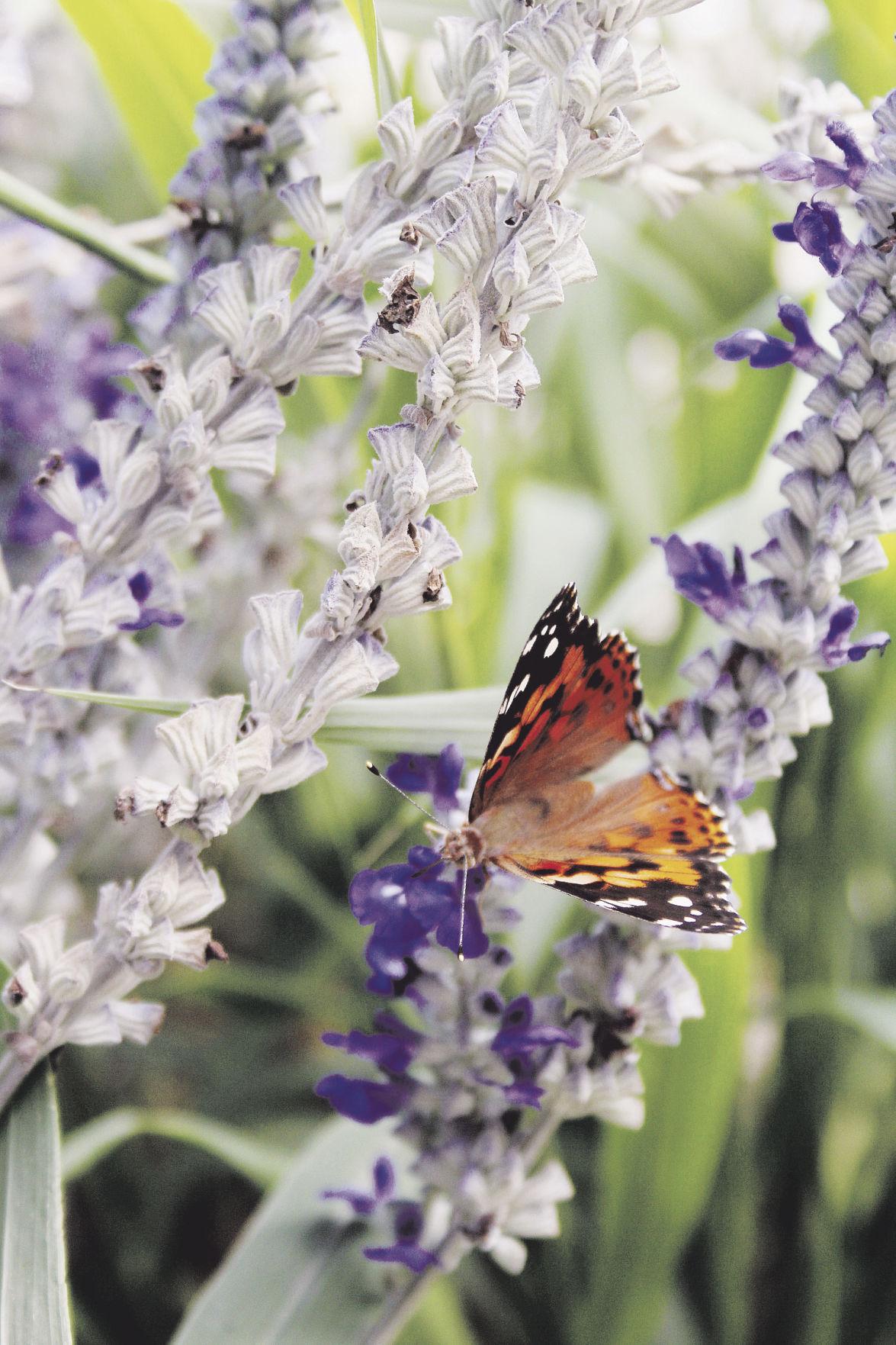 The downtown planters provide a sweet rest for butterflies, bees and even hummingbirds as they feed on the sweet nectar of the flowers planted there.

On Monday, the Brown County Commission approved for publication a proposed $11.3 million budget for 2020 that calls for a tax levy decrease of nearly a half mill.

The proposed budget calls for an estimated tax rate of 31.471 mills, which will generate more than $6.2 million in revenue. Due to a more than $8 million increase in the county’s assessed valuation, the county will collect an additional $174,000 in taxes — despite the decrease in the mill levy.

The commission has a public hearing scheduled for their Aug. 12 meeting to consider adoption of the budget.

At last week’s county commission meeting, the commissioners shaved off $77,876 overall from the proposed department budgets.

Born at Highland, McQueen lived most of his life in Hiawatha and attended schools here — graduating with the Class of 1949. He served with the Kansas Army National Guard, based in Hiawatha, and his specialty was radio repair. He was discharged after 9 years of service and went to work for Brown Electric for many years before purchasing the business in the early 1960s. After the death of Mrs. Brown, he changed the name of the business to McQueen Radio & TV, which he operated in downtown Hiawatha until he retired in 1995. He not only repaired radios and televisions, but also did appliance repair, installed TV antennas and much more.

McQueen is survived by his wife, Betty, of the home, along with two sons, Michael of Lansing and Brian of Hiawatha.

A celebration of his life was Tuesday at the First Christian Church in Hiawatha. See www.chapeloaksfuneralhome.com for a full obituary or page 2 of today’s paper.

The Brown County Clerk’s office is preparing for a primary election on Tuesday, Aug. 6.

Although several offices are being voted on in the November General Election, only one office will be voted on for the primary — Horton Commissioner of Parks and Recreation.

The position is a four-year term, currently held by Bobby Bacon, who has filed for re-election. Other filings for the position are: Glen Obbards, James D. Stuart and Richard J. Lovelady.

Early voting is open during regular business hours in the County Clerk’s office until noon on Monday, Aug. 5. The primary will be held on Tuesday, Aug. 6, in the City of Horton only at the Blue Building. 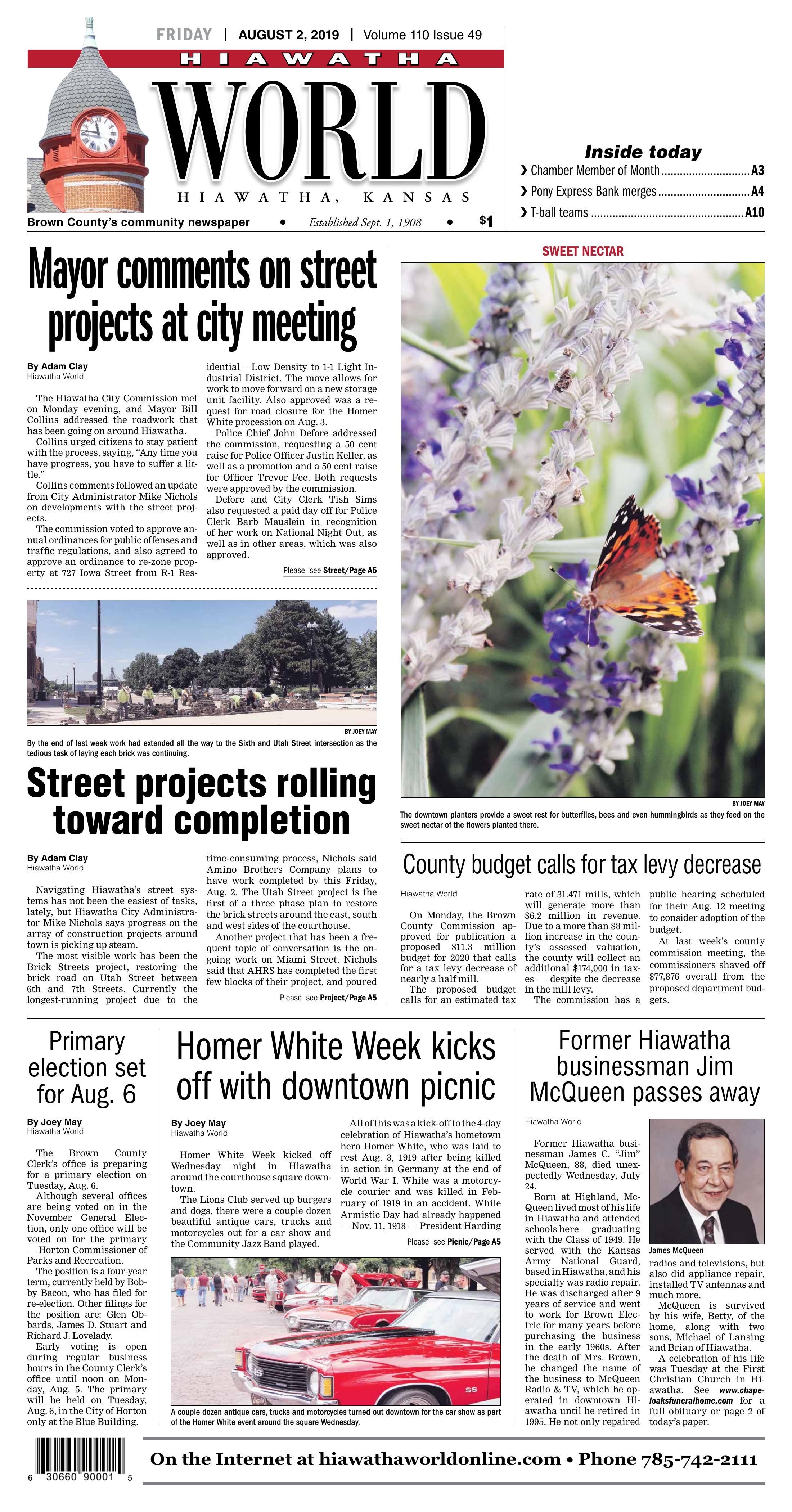