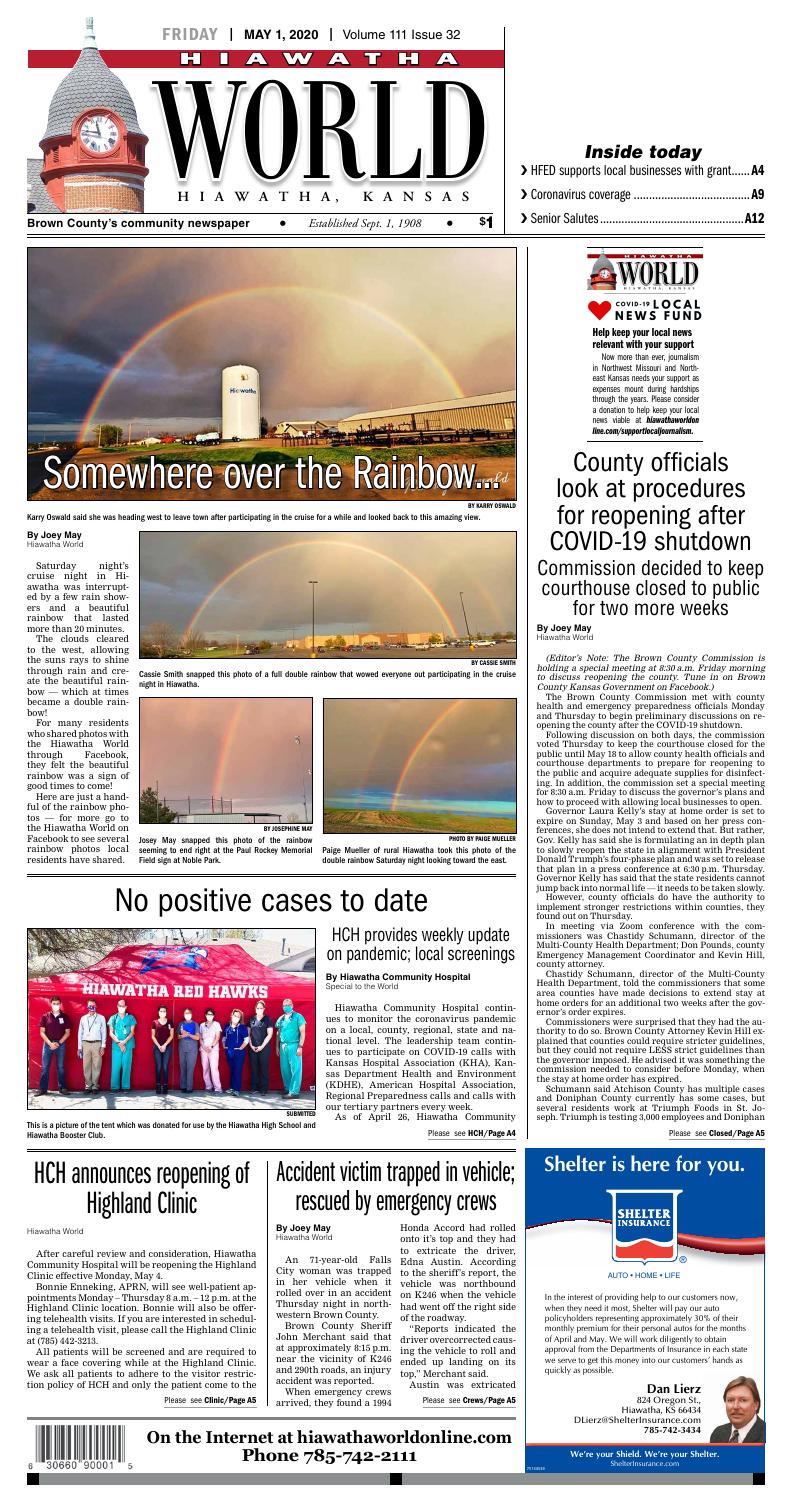 News
top story
Somewhere over the Rainbow...
By Joey May Hiawatha World

Paige Mueller of rural Hiawatha took this photo of the double rainbow Saturday night looking toward the east.

Joey May / By Cassie Smith

Cassie Smith snapped this photo of a full double rainbow that wowed everyone out participating in the cruise night in Hiawatha.

Josey May snapped this photo of the rainbow seeming to end right at the Paul Rockey Memorial Field sign at Noble Park.

Joey May / By Karry Oswald

Karry Oswald said she was heading west to leave town after participating in the cruise for a while and looked back to this amazing view.

Saturday night’s cruise night in Hiawatha was interrupted by a few rain showers and a beautiful rainbow that lasted more than 20 minutes.

The clouds cleared to the west, allowing the suns rays to shine through rain and create the beautiful rainbow — which at times became a double rainbow!

For many residents who shared photos with the Hiawatha World through Facebook, they felt the beautiful rainbow was a sign of good times to come!

Here are just a handful of the rainbow photos — for more go to the Hiawatha World on Facebook to see several rainbow photos local residents have shared.

This is a picture of the tent which was donated for use by the Hiawatha High School and Hiawatha Booster Club.

As of April 26, Hiawatha Community Hospital has had 284 calls to our COVID-19 Line. The CALL BEFORE YOU GO has been working very well to screen our patients. As part of our screening process, we have done 66 drive thru screenings. About 80 percent of the drive thru screenings have met the criteria to be sent for a COVID test. Between the drive thru screenings and the hospital, we have sent 62 Covid-19 samples for testing. The KDHE website states 63 tests in Brown County with No Positive Cases. To ensure the safety of our patients and staff, we have designated a separate wing in the hospital to utilize for suspected or confirmed COVID patients only. To date, we have used this COVID unit for 2 patients, both of which were ruled out for COVID after testing.

Effective Monday, April 27, HCH will be offering drive thru screenings and physician visits in a mobile clinic located between the hospital and former Dr. Searight Clinic in front of the West side Main Entrance. We will continue to screen all sick patients through CALL BEFORE YOU GO through our COVID Line. If patients meet the criteria for screening, they will be scheduled to come to the mobile clinic between 2-4:00 pm Monday through Friday.

The patients will have an office visit with one of our providers, who will be assessing the patient, and completing the screening tests. With the expanded symptom criteria for coronavirus, we will also see the patients in the mobile clinic. The providers and staff will have on personal protective equipment and the patients will be asked to come alone and wear a face covering.

Many hospitals have used the mobile clinic model during the pandemic. With the increased demand for screening in the area, we felt this was the best solution.

We continue to support the Governor’s Stay at Home initiative. The hospital has seen a decreased patient volume during the pandemic and we are expecting a $1 million decrease in money coming into the hospital in April alone. We have been spending this time cross training our staff to work in other departments and training all staff on personal protective equipment.

We are following the roadmap to safely resume elective surgery after the COVID-19 pandemic, which was developed by American College of Surgeons, American Society of Anesthesiologists, Association of Perioperative Registered Nurses and American Hospital Association. We have implemented an Elective Surgery Review Committee with Dr. Rod Warren, Dr. Bigham, Dustin Williams, our anesthesia providers, and hospital leadership to discuss our strategy for resuming limited elective surgery and procedures that are low risk. The committee will meet each week to review the potential cases for the following week.

We appreciate everyone’s’ support during these challenging times. We have seen the benefit of social distancing and wearing face coverings!

An 71-year-old Falls City woman was trapped in her vehicle when it rolled over in an accident Thursday night in northwestern Brown County.

Brown County Sheriff John Merchant said that at approximately 8:15 p.m. near the vicinity of K246 and 290th roads, an injury accident was reported.

When emergency crews arrived, they found a 1994 Honda Accord had rolled onto it’s top and they had to extricate the driver, Edna Austin. According to the sheriff’s report, the vehicle was northbound on K246 when the vehicle had went off the right side of the roadway.

“Reports indicated the driver overcorrected causing the vehicle to roll and ended up landing on its top,” Merchant said.

Austin was extricated and transported to Sabetha Community Hospital, where she was later flown out by helicopter. Sheriff Merchant said both the driver and an occupant were wearing seatbelts and were both from Falls City.

After careful review and consideration, Hiawatha Community Hospital will be reopening the Highland Clinic effective Monday, May 4.

Please CALL BEFORE YOU GO to the Highland Clinic at (785) 442-3213 to schedule an appointment for Bonnie Enneking or Dr. Pete Rosa.

Thank you for your continued support as we navigate these unprecedented times.

(Editor’s Note: The Brown County Commission is holding a special meeting at 8:30 a.m. Friday morning to discuss reopening the county. Tune in on Brown County Kansas Government on Facebook.)

The Brown County Commission met with county health and emergency preparedness officials Monday and Thursday to begin preliminary discussions on reopening the county after the COVID-19 shutdown.

Following discussion on both days, the commission voted Thursday to keep the courthouse closed for the public until May 18 to allow county health officials and courthouse departments to prepare for reopening to the public and acquire adequate supplies for disinfecting. In addition, the commission set a special meeting for 8:30 a.m. Friday to discuss the governor’s plans and how to proceed with allowing local businesses to open.

Governor Laura Kelly’s stay at home order is set to expire on Sunday, May 3 and based on her press conferences, she does not intend to extend that. But rather, Gov. Kelly has said she is formulating an in depth plan to slowly reopen the state in alignment with President Donald Trumph’s four-phase plan and was set to release that plan in a press conference at 6:30 p.m. Thursday. Governor Kelly has said that the state residents cannot jump back into normal life — it needs to be taken slowly.

However, county officials do have the authority to implement stronger restrictions within counties, they found out on Thursday.

Chastidy Schumann, director of the Multi-County Health Department, told the commissioners that some area counties have made decisions to extend stay at home orders for an additional two weeks after the governor’s order expires.

Commissioners were surprised that they had the authority to do so. Brown County Attorney Kevin Hill explained that counties could require stricter guidelines, but they could not require LESS strict guidelines than the governor imposed. He advised it was something the commission needed to consider before Monday, when the stay at home order has expired.

Nemaha County just got their first case this week and as of Thursday, Brown County did not have any cases, but Schumann advised on Monday that 75 individuals had been tested and were all found negative at that time.

The commissioners asked Pounds what his insight from state emergency management officials was concerning the governor’s proposed plan and he said he had heard she would start allowing essential businesses to reopen, a little at a time. This could mean continued social distancing and allowing only a percentage of a business’s maximum capacity in at one time, or limiting to 10 initially the first two weeks and then slowly allowing that number to increase.

Pounds said the governor’s plan is thought to include phases of reopening, by slowly adding more people, more businesses and locations to open. In addition, she plans to allow counties to place stricter regulations on her plan — depending upon situations there. For instance, what happens in Brown County could look a lot different than Johnson County, which has several hundred cases.

Currently, businesses allowed to stay open are only essential ones, but everyone could possibly reopen if they adhere to guidelines, with a few exceptions. The commissioners discussed how to enforce those guidelines and after much discussion thought that one option would be for businesses to submit a plan on how they proposed to reopen in alignment with the governor’s orders. Pounds suggested that businesses could email those plans to him and he could respond within 48 hours to allow that business to reopen.

Commissioners asked Hill about enforcing the guidelines, which would be up to local authorities. Hill said he had not had any cases yet of someone violating the governor’s orders and felt that if the situation would arise that a warning could be given first and if someone still was not compliant, that’s where an actual charge could come in.

Commissioners said that while they want to see businesses reopen for the economy, residents still need to be careful and there still needed to be that element of social distancing in order to keep cases in Brown County from popping up. Schumann and Pounds agreed they had concerns that the number of overall cases in Kansas continue to rise daily.

Several county department heads were at the meeting and asked what plans would be for the courthouse. The commissioners didn’t have one solid answer, but tossed around keeping the number of people per floor under 10, keeping track of names at the door and the number of people entering and exiting. They also would have someone asking questions at the front door check in with security and even potentially requiring temperature checks before allowing a person in the courthouse. There was also discussion of additional cleaning — sanitizing counters after each customer — and other ways to keep the county employees and customers safe.

Pounds said he would like a little time to get supplies ordered, and suggested seeing if some county employees who sewed as a hobby could make employees masks. He also said the commission should consider as whether to require customers to wear masks, and would the county be required to provide those.

There was also discussion of how many in each department would be able to return to work, plus how court numbers could add to the issue.

County Clerk Melissa Gormley said she would like to reopen for at least some work on the upcoming elections and said she could allow people in her office by appointment only. Services for Elderly Director Lori Gray discussed the county taxi and the commissioners decided it would be best to keep that closed for at least the next two weeks.

There was also discussion about property tax payments that are due May 11 and the commissioners said that residents can mail those payments in and in case of an emergency, a staff member could meet a customer at the door of the courthouse. Hill advised that the state has not extended the deadline for payment.

The commission asked Hill about procedures for court hearings. He advised that most hearings had been postponed unless it was an emergency, such as a child in need of care, or protective custody hearings. He said those have been able to accomplished with Zoom conferences. 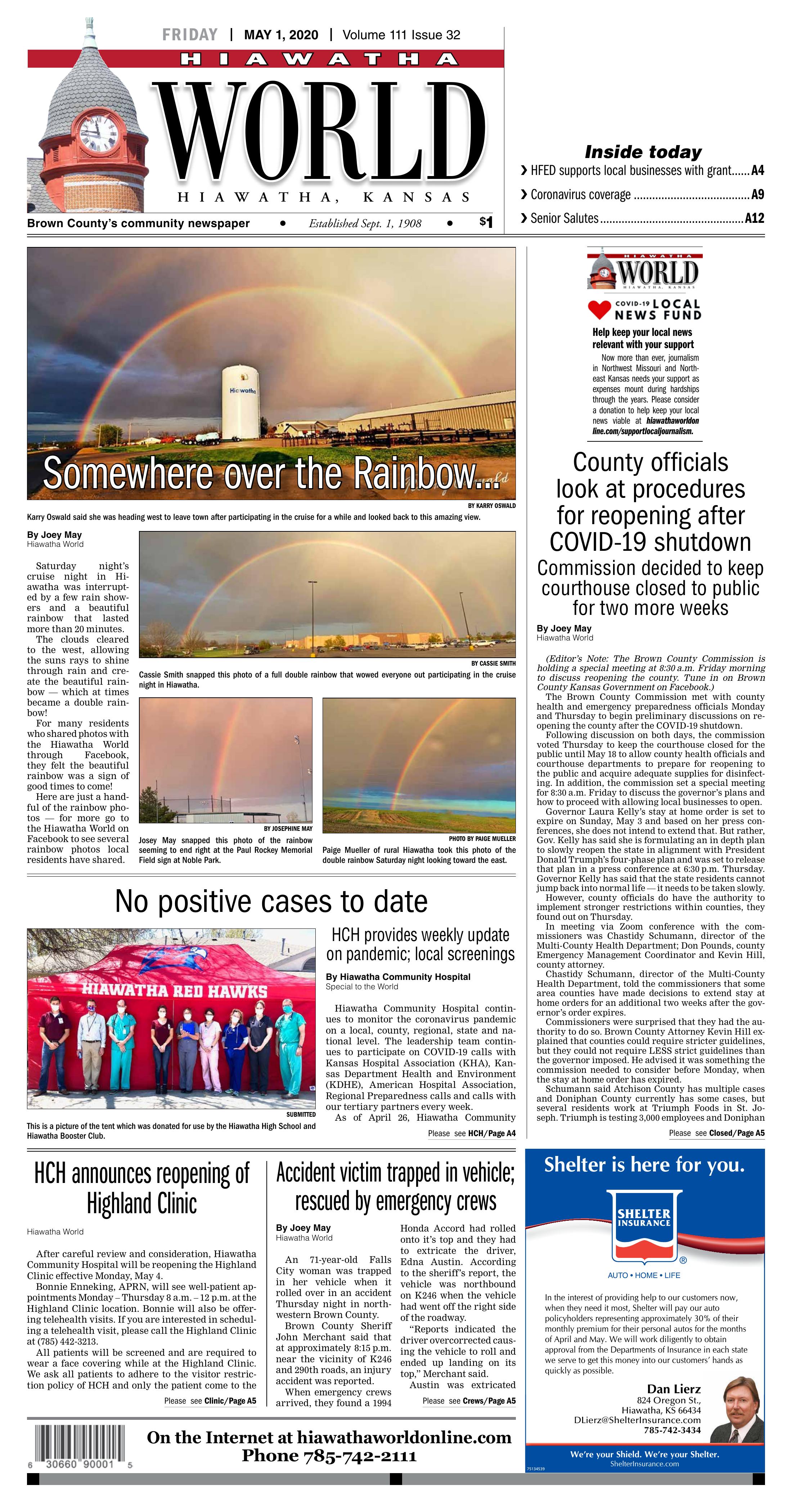