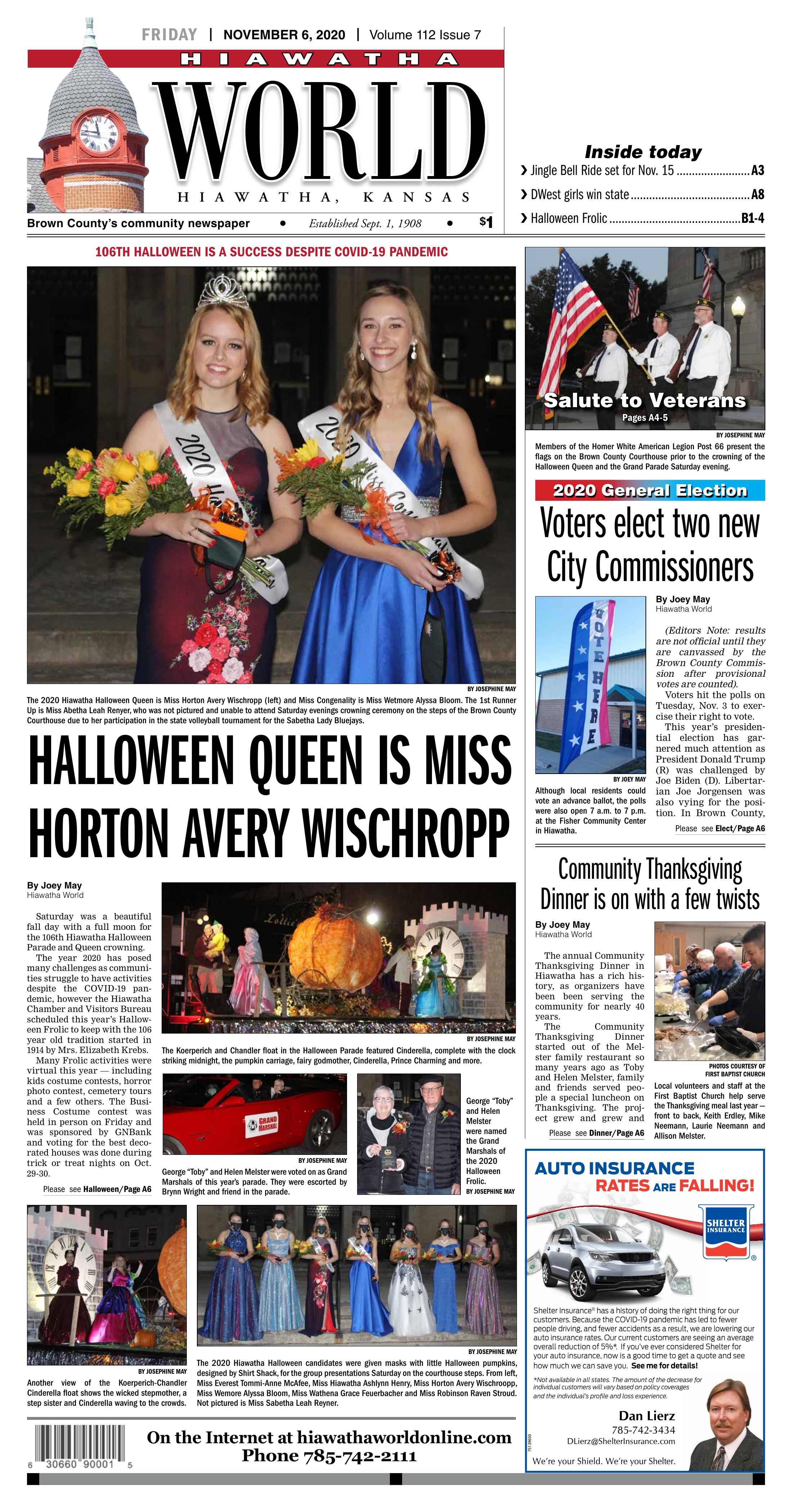 The 2020 Hiawatha Halloween Queen is Miss Horton Avery Wischropp (left) and Miss Congenality is Miss Wetmore Alyssa Bloom. The 1st Runner Up is Miss Abetha Leah Renyer, who was not pictured and unable to attend Saturday evenings crowning ceremony on the steps of the Brown County Courthouse due to her participation in the state volleyball tournament for the Sabetha Lady Bluejays.

Members of the Homer White American Legion Post 66 present the flags on the Brown County Courthouse prior to the crowning of the Halloween Queen and the Grand Parade Saturday evening.

Joey May / By Josephine may

George “Toby” and Helen Melster were voted on as Grand Marshals of this year’s parade. They were escorted by Brynn Wright and friend in the parade.

George “Toby” and Helen Melster were named the Grand Marshals of the 2020 Halloween Frolic.

Another view of the Koerperich-Chandler Cinderella float shows the wicked stepmother, a step sister and Cinderella waving to the crowds.

Steve Winter adorned his antique 1955 Chevrolet Belaire with a glowing pumpkin for the Halloween Parade.

The Halloween Parade featured decorated vehicles of all kinds this year, including this Chiefs shout out by Ryan and Cassie Smith of Hiawatha.

Saturday was a beautiful fall day with a full moon for the 106th Hiawatha Halloween Parade and Queen crowning.

The year 2020 has posed many challenges as communities struggle to have activities despite the COVID-19 pandemic, however the Hiawatha Chamber and Visitors Bureau scheduled this year’s Halloween Frolic to keep with the 106 year old tradition started in 1914 by Mrs. Elizabeth Krebs.

Many Frolic activities were virtual this year — including kids costume contests, horror photo contest, cemetery tours and a few others. The Business Costume contest was held in person on Friday and was sponsored by GNBank and voting for the best decorated houses was done during trick or treat nights on Oct. 29-30.

The Halloween Queen pageant was held the weekend prior to Halloween, sponsored by the HCVB Queen coordinator Ciara Nioce and her committee.

Nioce said the contest was all held virtually this year. The candidates submitted their applications on Oct. 16, along with a video of them presenting their essays and a talent by Oct. 21. On Sunday, Oct. 25, they had a scheduled interview with the judging panel via Microsoft Teams.

Nioce said that as as well as being judged on their essay, the contestants were judged on leadership, community involvement, scholastic achievements, and had to answer two interview questions in front of a panel of judges.

The crowning was held on the steps of the Brown County Courthouse at 6:30 p.m. Saturday, following a flag presentation by members of the Homer White American Legion Post 66.

The 2020 Hiawatha Halloween Queen is Miss Horton Avery Wischropp (left) and Miss Congenality is Miss Wetmore Alyssa Bloom. The 1st Runner Up is Miss Abetha Leah Renyer, who was not pictured and unable to attend Saturday evenings crowning ceremony on the steps of the Brown County Courthouse due to her participation in the state volleyball tournament for the Sabetha Lady Bluejays.

The Halloween Queen receives a $1,000 scholarship, sponsored by Rainbow Communications; 1st Runner-Up a $500 scholarship and Miss Congeniality a $250 scholarship.

The other two scholarships come from any monetary donations the Queen fund receives. This year the fund received $250 total from Dr. Jordan Haedt, Casino White Cloud and Morrill & Janes Bank.

The Afternoon Kiddie Parade and Frolic activities around the courthouse were not held this year as the HCVB wanted to provide a safe environment for the community and focus on the evening Grand Parade.

This year’s Grand Parade kicked off at 7 p.m. with volunteer Chris Diller announcing and playing Halloween music. There was no registration this year — the parade was an all-inclusive one, with many of the vehicles starting at the high school, led by the Hiawatha Police Department. The parade route included all of Oregon and First and the turn around point was at the high school Red Hawk Drive.

Chamber officials said they were very pleased by the participation and the creativity of the vehicles. Some people went all out with streamers, balloons, big pumpkins on their hoods, blow up vehicles an much more. One family — the Koerperich/Chandler family created a traditional float with the theme of Cinderella.

“The 2020 Halloween Frolic was a bit different this year, but the Chamber Board and Frolic Committee worked to find ways to carry on our traditions,” said Sarah Kleopfer, Chamber Administrator. “We were able to continue most or all of our traditional contests such as poster, pumpkin decorating, Miss Mary Costume Contest, Business Costume Contest and others. Thanks to everyone who sponsored the contests and to those who participated. The parade looked different, but still was very successful. People really showed up and did a great job decorating vehicles and participating. We kept our tradition going!”

For a complete list of contest winners check out the B section of Friday’s Hiawatha World or go to the Hiawatha Frolic Facebook site.

A voting flag waves in the wind at the Fisher Center.

(Editors Note: results are not official until they are canvassed by the Brown County Commission after provisional votes are counted).

Voters hit the polls on Tuesday, Nov. 3 to exercise their right to vote.

This year’s presidential election has garnered much attention as President Donald Trump (R) was challenged by Joe Biden (D). Libertarian Joe Jorgensen was also vying for the position. In Brown County, Trump defeated Biden nearly three to one in the popular vote.

By Thursday morning, the votes were still being counted and Biden had begun to pull ahead with Electoral Votes. As of press time Thursday, Biden had received 264 of the Electoral Votes and Trump 214. In the popular vote, Biden also led 72,723,151 to Trump’s 69,127,275.

In the other city commission race, Commissioner of Parks and Streets Becky Shamburg narrowly held onto her seat as she was challenged by two people — Nicholas Blevins and Paul Mendez. The final tally: Shamburg 612; Blevins 570 and Mendez 179.

In addition, the voters made decisions on state and U.S. positions for Senate and Congress. Locally, two county commission positions were unopposed in the general election as were several other county positions including Treasurer, Register of Deeds and County Attorney. Three Hiawatha City Commissioners all had challengers for their positions.

The Brown County Clerk’s office reported a 70 percent turnout with 4,220 of the 6,289 registered voters coming out to vote. Of those, there was 1,704 voters choosing advance voting.

The following positions were decided by the Brown County and U.S. voters:

County Commission: Commissioner Dwight Kruse lost to challenger William Pollock in the primary for the District 3 Commission seat and Commissioner Keith Olsen did not file for re-election for District 2 Commission. Lamar Shoemaker is the only candidate running for Olsen’s seat. In the General Election, Pollock had 1,005 votes and Shoemaker 1,232.

For information on township and other elections, go to brcoks.org and click on Elections and Election Results for final results.

The annual Community Thanksgiving Dinner in Hiawatha has a rich history, as organizers have been been serving the community for nearly 40 years.

The Community Thanksgiving Dinner started out of the Melster family restaurant so many years ago as Toby and Helen Melster, family and friends served people a special luncheon on Thanksgiving. The project grew and grew and was moved to the Fisher Community Center for several years until the Melsters partnered with the First Baptist Church many years ago to help continue the tradition that has become a favorite in Hiawatha.

Last year was the 37th annual dinner and more than 60 volunteers — including the Melster family and members of the First Baptist Church — served a total of 367 delivery/carry out meals and 150 dine in meals at the church.

This year, the tradition will continue, but due to the COVID-19 pandemic, the Melsters and organizers from the church have made the decision that there would not be an in-person meal served at the church or delivered. Instead meal boxes will be provided early in the week of Thanksgiving, so that families can prepare their own holiday meal.

Call-in or online registrations for the dinner will be taken until Nov. 8. Reservations must be made by the end of the day to receive a meal box.

The organizers are asking for financial contributions this year as well. As always, contributions directly fund the dinner and the remaining funds go directly back to the community through Christmas food baskets, Brown County food Bank and Karla’s Diaper Closet, to name a few.

This year’s take-out Thanksgiving meal boxes will cost considerably more than the traditional eat-in meal as has been served in the past. The added cost has raised the committee’s financial goal to $5,000.

All contributions can be mailed or delivered to the First Baptist Church at 210 Lodge Rd., Hiawatha, KS 66434. To sign up for a thanksgiving meal box, or give financial support, please visit FBC’s website at www.fbchiawatha.org. For information call FBC at 742-3423 or email at admin@fbchiawatha.org.