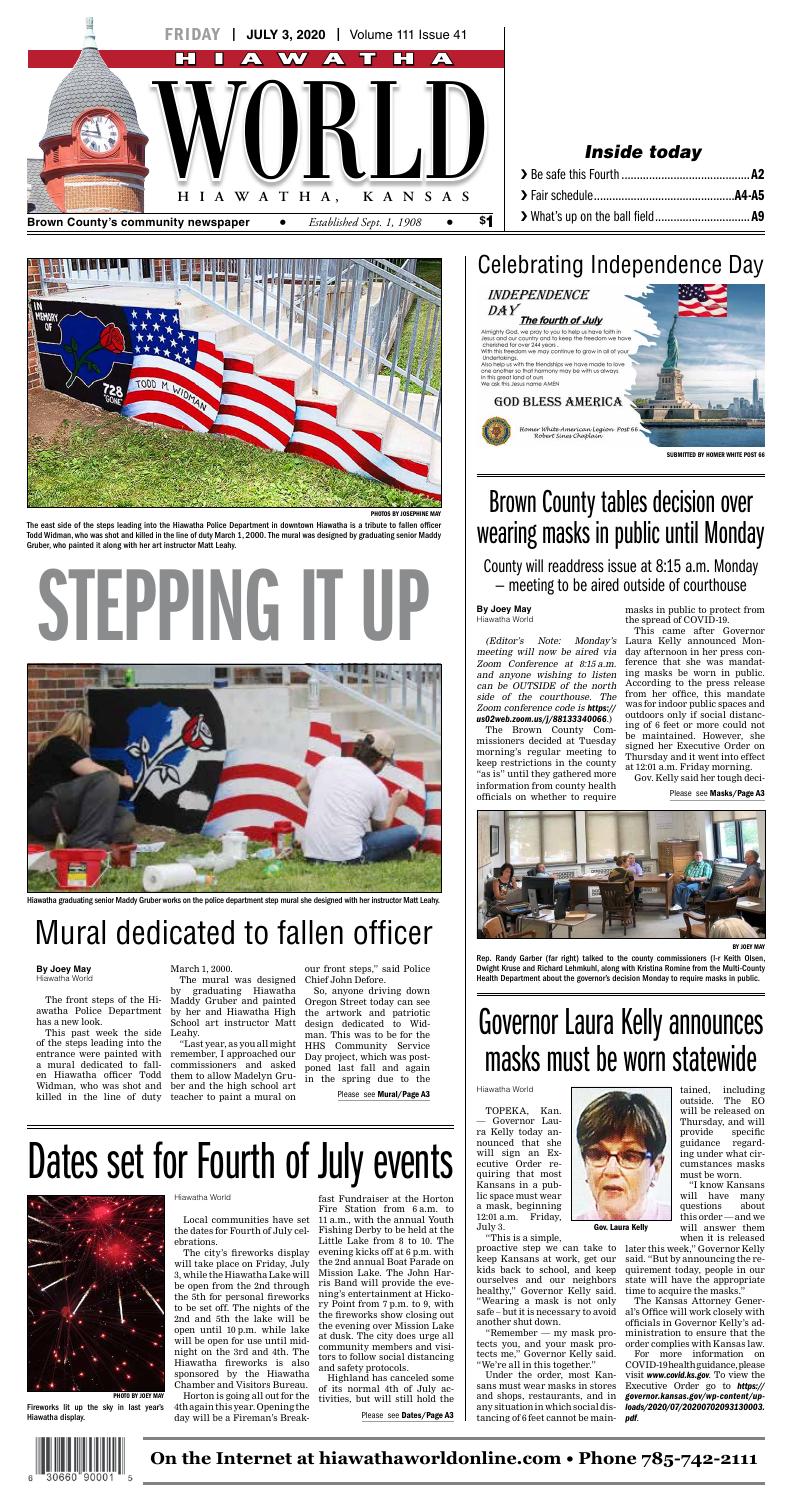 The east side of the steps leading into the Hiawatha Police Department in downtown Hiawatha is a tribute to fallen officer Todd Widman, who was shot and killed in the line of duty March 1, 2000. The mural was designed by graduating senior Maddy Gruber, who painted it along with her art instructor Matt Leahy.

The front steps of the Hiawatha Police Department has a new look.

This past week the side of the steps leading into the entrance were painted with a mural dedicated to fallen Hiawatha officer Todd Widman, who was shot and killed in the line of duty March 1, 2000.

The mural was designed by graduating Hiawatha Maddy Gruber and painted by her and Hiawatha High School art instructor Matt Leahy.

“Last year, as you all might remember, I approached our commissioners and asked them to allow Madelyn Gruber and the high school art teacher to paint a mural on our front steps,” said Police Chief John Defore.

So, anyone driving down Oregon Street today can see the artwork and patriotic design dedicated to Widman. This was to be for the HHS Community Service Day project, which was postponed last fall and again in the spring due to the COVID-19 pandemic.

“This project could have just been forgotten about and left undone but these two are here today on their own time following through with what they started,” he said. “The east side of the mural has remembrances to Todd M. Widman who lost his life while serving our community. Some say the best way to find yourself is in service to others. Through their artwork, they are being of service to our community and for that, we wish to say thank you to them!”

photo By Joey May

Fireworks lit up the sky in last year’s Hiawatha display.

Local communities have set the dates for Fourth of July celebrations.

Horton is going all out for the 4th again this year. Opening the day will be a Fireman’s Breakfast Fundraiser at the Horton Fire Station from 6 a.m. to 11 a.m., with the annual Youth Fishing Derby to be held at the Little Lake from 8 to 10. The evening kicks off at 6 p.m. with the 2nd annual Boat Parade on Mission Lake. The John Harris Band will provide the evening’s entertainment at Hickory Point from 7 p.m. to 9, with the fireworks show closing out the evening over Mission Lake at dusk. The city does urge all community members and visitors to follow social distancing and safety protocols.

Highland has canceled some of its normal 4th of July activities, but will still hold the parade and fireworks show. The parade will begin at 10 a.m., with registration from 8:45 to 9:15 in the high school parking lot. The fireworks show will be held at the HCC practice football field with an estimated start time of 9:30. City officials recommend social distancing and face masks at both activities.

According to the Sabetha Chamber of Commerce website, the city’s fireworks display will be held at 10 p.m. on July 3 by the Sabetha Fire Department.

At this point, both Everest and Robinson have announced that all 4th of July activities have been canceled for the year. 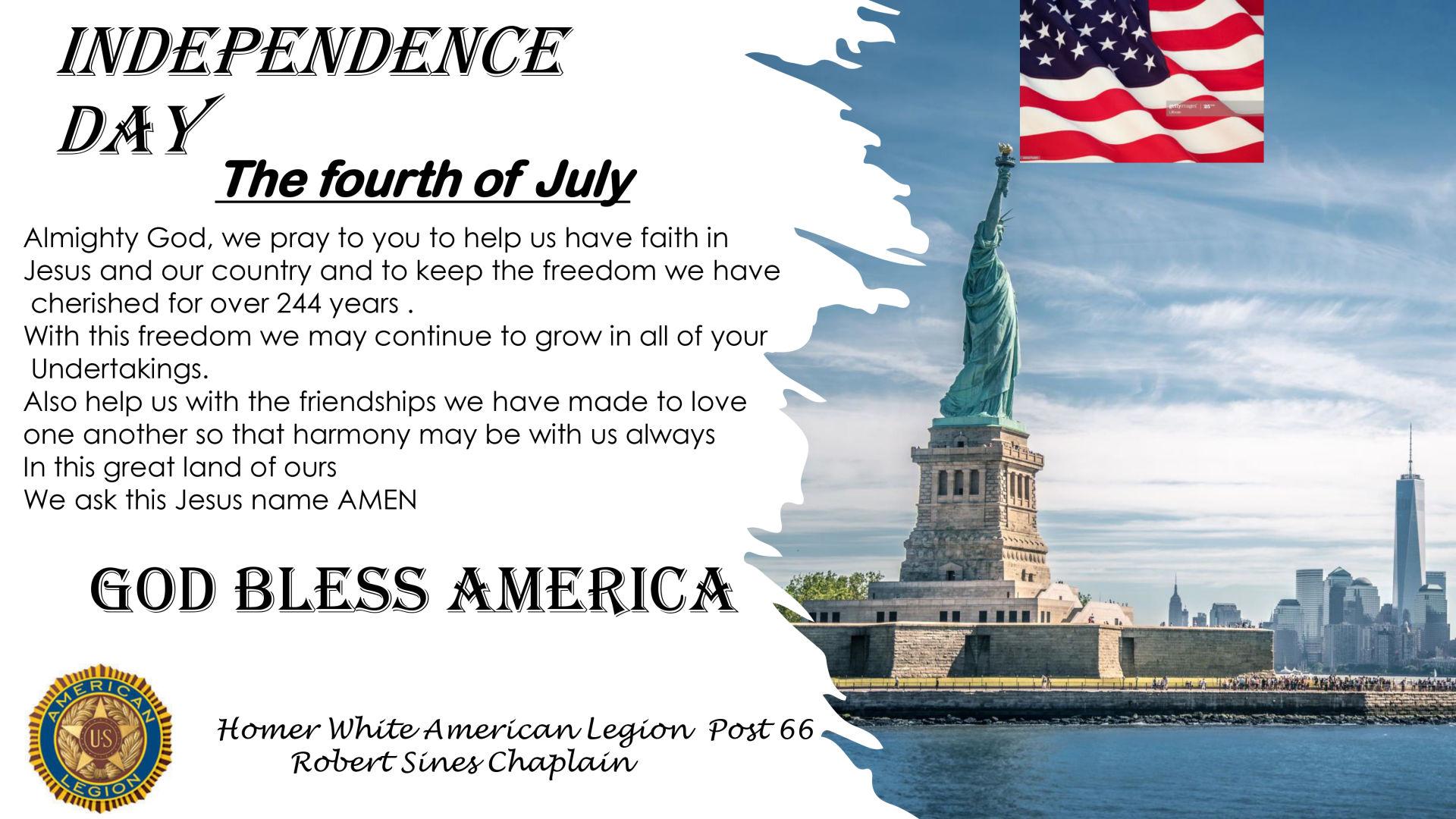 (Editor’s Note: Monday’s meeting will now be aired via Zoom Conference at 8:15 a.m. and anyone wishing to listen can be OUTSIDE of the north side of the courthouse. The Zoom conference code is https://us02web.zoom.us/j/88133340066.)

The Brown County Commissioners decided at Tuesday morning’s regular meeting to keep restrictions in the county “as is” until they gathered more information from county health officials on whether to require masks in public to protect from the spread of COVID-19.

This came after Governor Laura Kelly announced Monday afternoon in her press conference that she was mandating masks be worn in public. According to the press release from her office, this mandate was for indoor public spaces and outdoors only if social distancing of 6 feet or more could not be maintained. However, she signed her Executive Order on Thursday and it went into effect at 12:01 a.m. Friday morning.

Gov. Kelly said her tough decision came after a huge increase in cases over the weekend and assured Kansans it was for their continued safety.

Some Brown Countians disagree. There were several people present at Tuesday’s commission meeting to implore the commissioners to override the governor’s decision.

Rep. Randy Garber — who was present at the meeting — told the commissioners that according to House Bill 2016 the commission could make a decision to over ride the governor’s Executive Order — of which more specific details are to be made public on Thursday.

Rep. Garber made it plain he was against the governor’s decision and felt it violated the rights of Kansans.

“It is unfortunate, the but government oversteps its bounds at times,” Rep. Garber said.

Several people in the audience spoke out to the commissioners, and a few times had to be asked to quiet down. Among the concerns spoken about was they felt that being ordered to wear masks violated their Constitutional rights and also that tests were conflicting on whether masks adequately would protect a person from COVID-19.

During an outburst by one woman in the crowd, she said the governor was a “rogue governor” and had no right to impose these restrictions, stating Gov. Kelly needed to be removed from office.

The commissioners reached out to County Attorney Kevin Hill on the phone to ask his opinion on what they should do. Hill said he wanted the commission to gather actual scientific and factual evidence and not be swayed by any political representation. He said that in order to override the governor’s decision, the commission had to make a determination from the county health officer that it was not necessary for county residents to wear masks in public.

As of Tuesday, Brown County had 14 cases — all of which have recovered, according to the health department records.

One county resident told the commissioners that “we are not Kansas City,” that Brown County was doing what it was supposed to, referring to the fact that numbers in Johnson County and some other areas had skyrocketed.

Members of the audience asked the commission to make a decision by Friday, however the governor’s next press conference was not slated to happen until Thursday afternoon. Friday is a county holiday and the courthouse is closed.

With Fourth of July looming, and a question of whether some of the scheduled activities would have to change their requirements to mandate masks, the county commissioners decided to table any action until Monday.

Romine, who said she sympathized with the frustrations of the audience members, also said they had many people contact them just as passionate about requiring that members of the public wear masks. She said she would reach out to local counties to see what action they were taking and also discuss with Chastity Schumann, the county health officer, along with hospital officials in the county.

Another issue that needs determined is if they plan to require masks in public, how and who would enforce it? Would it come down to local Sheriff’s Office and Police Departments?

The commission said they would readdress the issue at 8:15 a.m. on Monday at the next regular commissioner’s meeting. The meeting will aired via Zoom Conference at https://us02web.zoom.us/j/88133340066.

County Emergency Planning Coordinator Don Pounds joined the meeting via Zoom conference and discussed a resolution to form a SPARKS Task Committee to oversee $1.9 million in funds for COVID-19 relief. The commission voted to pass the resolution and will work towards getting members of an eight-person committee to oversee the funds, including an accountant. These funds will go toward reimbursing the county and city governments, and other entities for expenses due to COVID-19. The county has 45 days to put this in place.

The commission voted to keep the nurse — who takes temperatures and conducts health checks at the front door — on for another month.

Commissioner Richard Lehmkuhl discussed a request from the Hiawatha School District to chip and seal the parking lot at the Hiawatha Elementary School. This was agreed upon earlier this year by a previous county employee but since then some of the more experienced equipment drivers have quit working for the city, so Lehmkuhl said they don’t have the staff to make this happen. He said he was contacted this week by school officials asking them to reconsider this decision, that work at the HES parking lot is being completed and the chip and seal is the final cap on that project.

The commissioners discussed that they were concerned with the staffing issue and didn’t think they could make it happen. Commissioner Keith Olsen said he had already told Horton schools they couldn’t do theirs and suggested they contact the City of Horton for possible help. It was the general consensus of the commission that Lehmkuhl advise the Hiawatha schools to contact the City of Hiawatha for help with the chip and seal.

WILLDAN — Brent Ragsdale, Willdan, updated the commission on the current conditions of the heating and cooling at the jail. Recommendations are to upgrade the HVAC system and add additional features to the rooftop along with replacing lighting to current LED standards. Estimated cost of the project is $970,000 — $1,140,000.

ROAD & BRIDGE — Julie Liberty, Road and Bridge Secretary, presented the final report for Streambank Revitalization on 290th Street. She also discussed other projects she has been working on.

A snapshot of Governor Laura Kelly as she delivered a recent press conference.

TOPEKA, Kan. — Governor Laura Kelly today announced that she will sign an Executive Order requiring that most Kansans in a public space must wear a mask, beginning 12:01 a.m. Friday, July 3.

“This is a simple, proactive step we can take to keep Kansans at work, get our kids back to school, and keep ourselves and our neighbors healthy,” Governor Kelly said. “Wearing a mask is not only safe – but it is necessary to avoid another shut down.

Under the order, most Kansans must wear masks in stores and shops, restaurants, and in any situation in which social distancing of 6 feet cannot be maintained, including outside. The EO will be released on Thursday, and will provide specific guidance regarding under what circumstances masks must be worn.

“I know Kansans will have many questions about this order — and we will answer them when it is released later this week,” Governor Kelly said. “But by announcing the requirement today, people in our state will have the appropriate time to acquire the masks.”

The Kansas Attorney General’s Office will work closely with officials in Governor Kelly’s administration to ensure that the order complies with Kansas law. 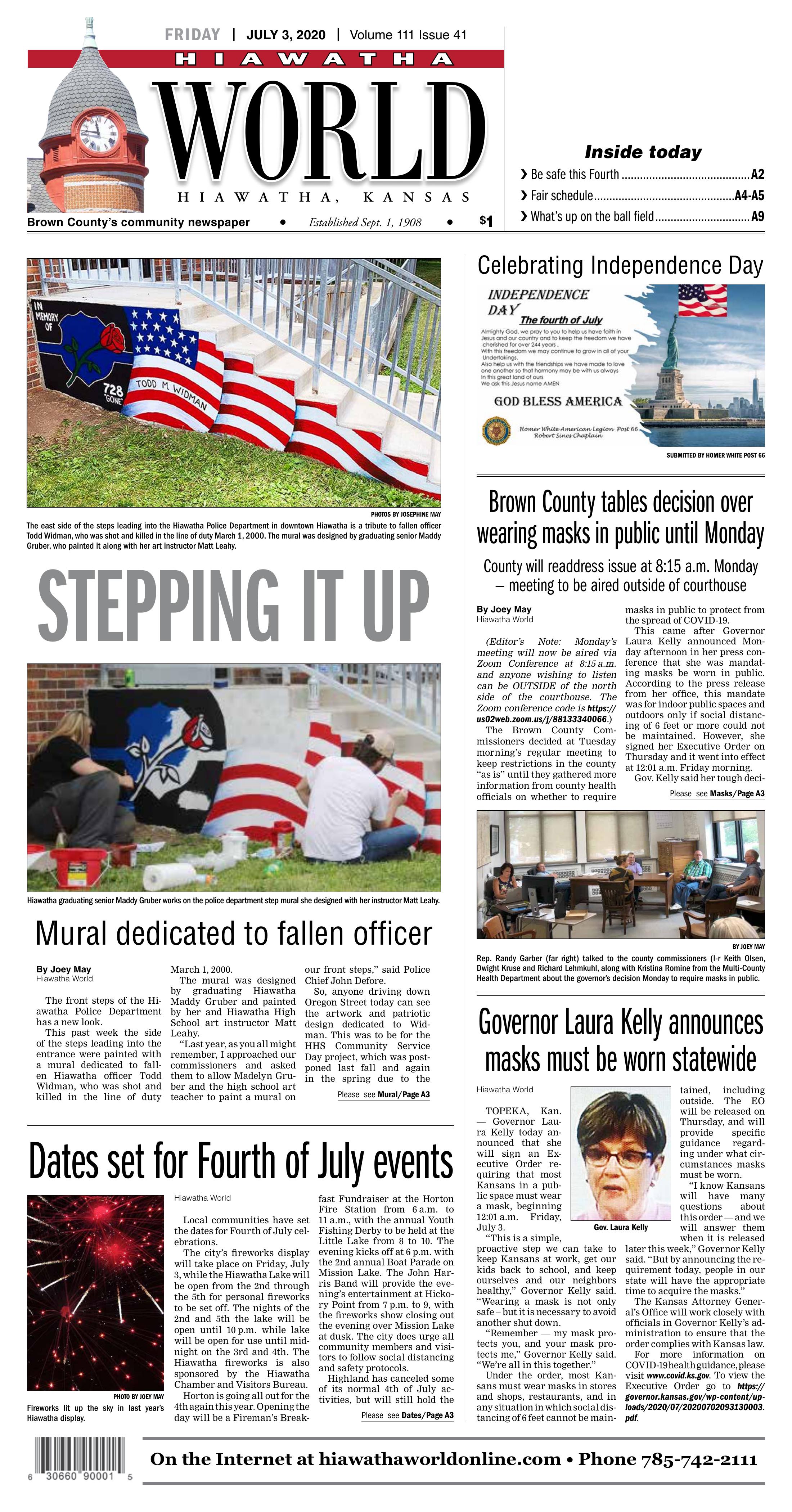