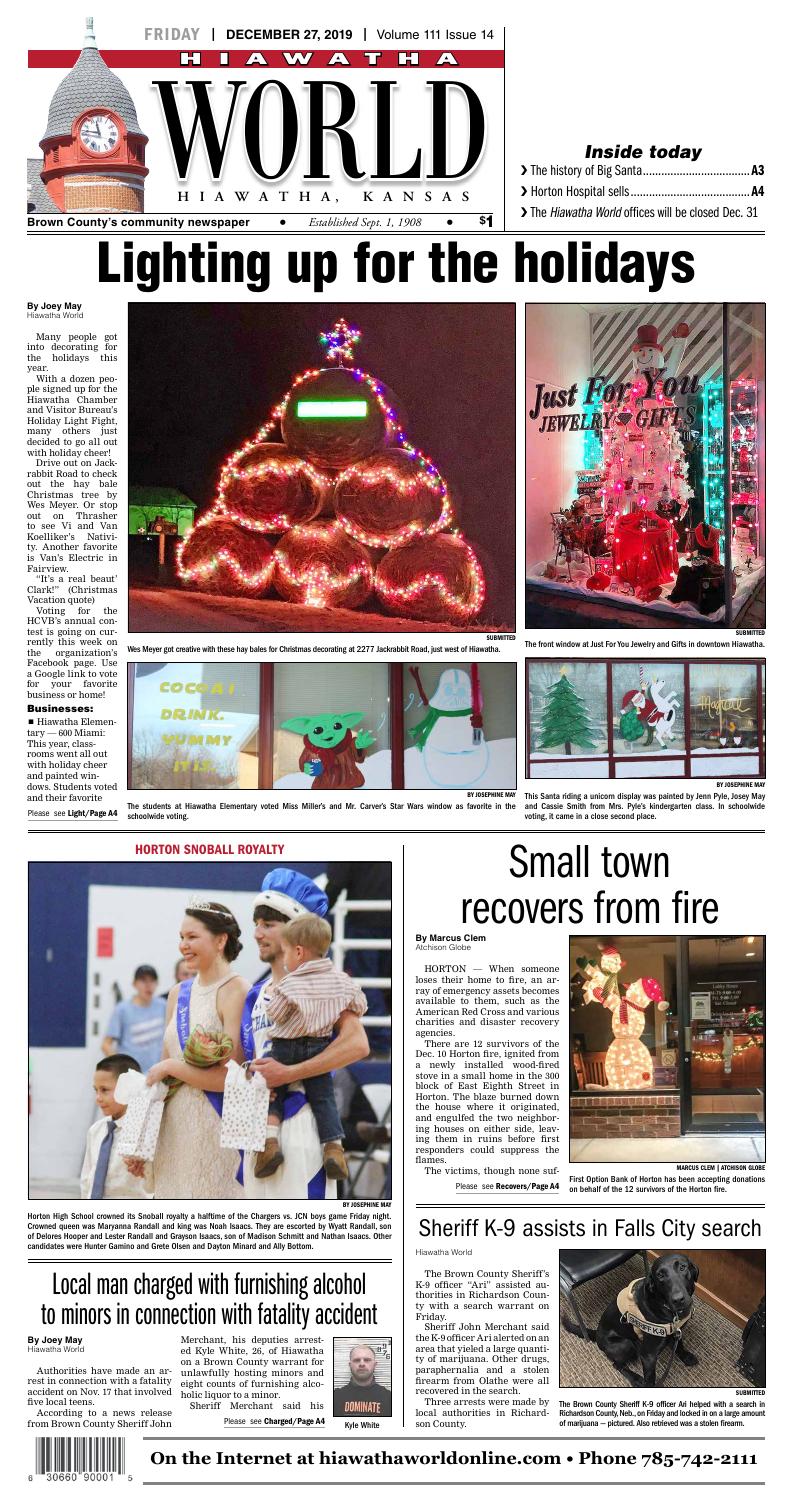 Wes Meyer got creative with these hay bales for Christmas decorating at 2277 Jackrabbit Road, just west of Hiawatha.

The front window at Just For You Jewelry and Gifts in downtown Hiawatha.

The students at Hiawatha Elementary voted Miss Miller’s and Mr. Carver’s Star Wars window as favorite in the schoolwide voting.

This Santa riding a unicorn display was painted by Jenn Pyle, Josey May and Cassie Smith from Mrs. Pyle’s kindergarten class. In schoolwide voting, it came in a close second place.

Many people got into decorating for the holidays this year.

With a dozen people signed up for the Hiawatha Chamber and Visitor Bureau’s Holiday Light Fight, many others just decided to go all out with holiday cheer!

Drive out on Jackrabbit Road to check out the hay bale Christmas tree by Wes Meyer. Or stop out on Thrasher to see Vi and Van Koelliker’s Nativity. Another favorite is Van’s Electric in Fairview.

Voting for the HCVB’s annual contest is going on currently this week on the organization’s Facebook page. Use a Google link to vote for your favorite business or home!

Hiawatha Elementary — 600 Miami: This year, classrooms went all out with holiday cheer and painted windows. Students voted and their favorite went to Miss Miller and Mrs. Carver’s Star Wars window and second went to Mrs. Pyle/Josey May and Cassie Smith for Santa riding a unicorn.

Just For You Jewelry and Gifts — 620 Oregon St.

Linck Your Heart to the Spirit of Christmas: 605 Miami

Hop in your car and check out the holiday sights in Hiawatha! Don’t forget to get on the HCVB Facebook page to vote for your favorite in town lights as listed above. 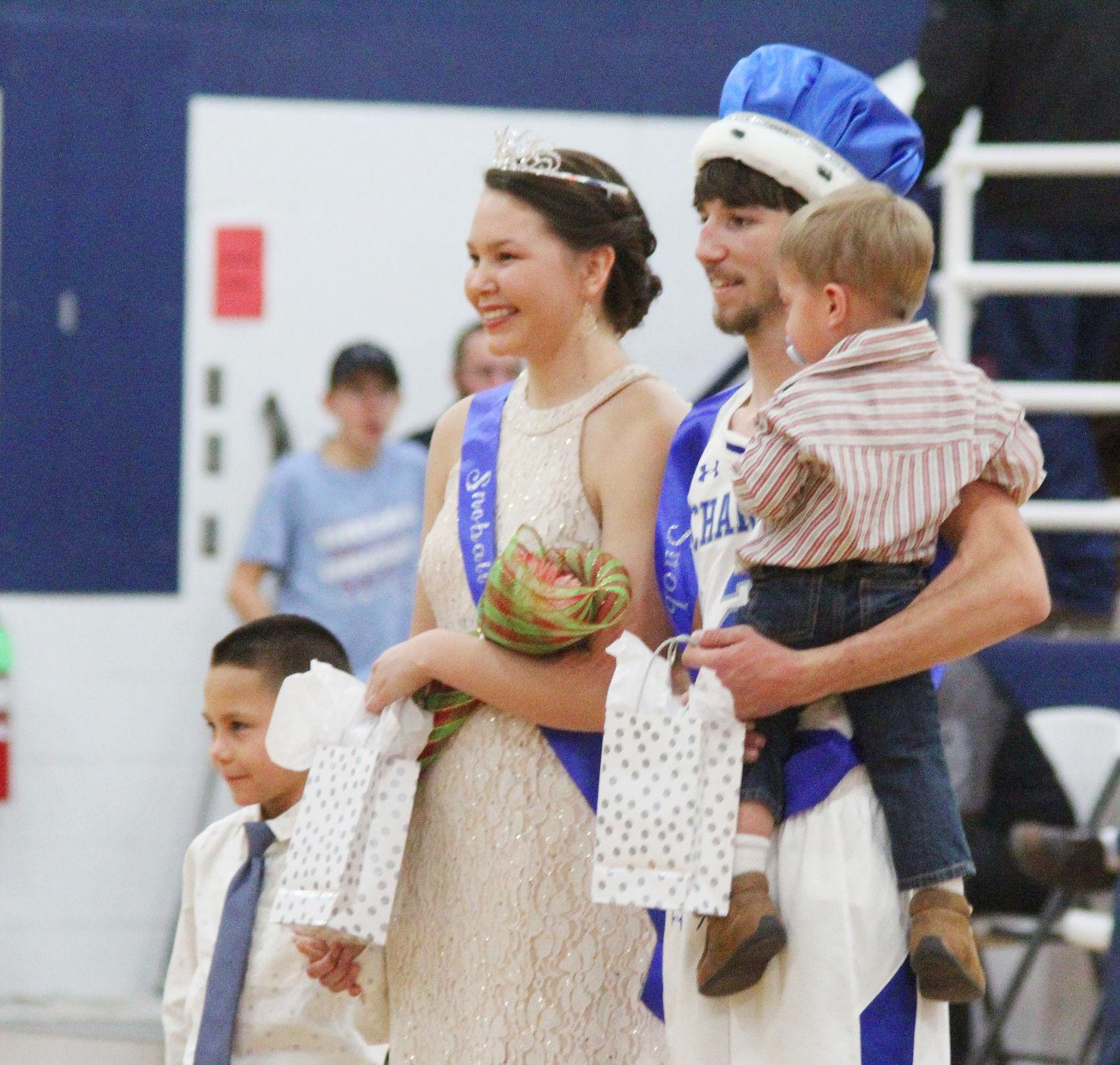 Horton High School crowned its Snoball royalty a halftime of the Chargers vs. JCN boys game Friday night. Crowned queen was Maryanna Randall and king was Noah Isaacs. They are escorted by Wyatt Randall, son of Delores Hooper and Lester Randall and Grayson Isaacs, son of Madison Schmitt and Nathan Isaacs. Other candidates were Hunter Gamino and Grete Olsen and Dayton Minard and Ally Bottom.

Authorities have made an arrest in connection with a fatality accident on Nov. 17 that involved five local teens.

According to a news release from Brown County Sheriff John Merchant, his deputies arrested Kyle White, 26, of Hiawatha on a Brown County warrant for unlawfully hosting minors and eight counts of furnishing alcoholic liquor to a minor.

Sheriff Merchant said his deputies, along with the county attorney, began the investigation immediately following an accident right around 12 o’clock the morning of Sunday, Nov. 17 at Horned Owl and US 36 Highways. He said authorities have spent many hours on the investigation.

According to a Kansas Highway Patrol report, Andrew O. Kreek, 17, of Hiawatha was driving northbound on Horned Owl, missed a slight curve, lost control of the vehicle, it went airborne and it crashed into an embankment on the north side of U.S. 36 Highway.

The KHP reported that Kreek was traveling at a high rate of speed when he experienced a loss of control of the vehicle.

A passenger in the vehicle, Ian Miller, 16, of Hiawatha was pronounced dead at the scene. Other passengers, Gabriel Corbett, 18, and Nevaeh Dismang, 15, along with Kreek — all of Hiawatha — all were flown by medical helicopter from the scene to the University of Kansas Hospital in Kansas City. First responders transported Andrew T. Woods, 19, to Hiawatha Community Hospital for treatment of non-life-threatening injuries; he was later released.

All three of the teens were in critical condition for weeks at KU Medical Center and Madonna Rehabilitation Center in Lincoln, Neb. Kreek had a brain injury and Corbett and Dismang had several broken bones and fractures — some that required surgery and rehabilitation. They have all been released from the hospital, according to family members who have posted updates on Facebook.

The ruins of the three burned-out homes in the 300 block of East Eighth Street in Horton remain standing a week after the blaze.

Horton residents gather on Wednesday at the Horton High School cafeteria to raise funds for a former agriculture instructor, David Potroff, amid his recent brain tumor diagnosis, and for the victims of the Dec. 10 fire.

First Option Bank of Horton has been accepting donations on behalf of the 12 survivors of the Horton fire.

HORTON — When someone loses their home to fire, an array of emergency assets becomes available to them, such as the American Red Cross and various charities and disaster recovery agencies.

There are 12 survivors of the Dec. 10 Horton fire, ignited from a newly installed wood-fired stove in a small home in the 300 block of East Eighth Street in Horton. The blaze burned down the house where it originated, and engulfed the two neighboring houses on either side, leaving them in ruins before first responders could suppress the flames.

The victims, though none suffered significant physical harm, would need a lot of help to recover.

They received it. So much help has arrived that Horton City Hall has had to ask people to stop sending clothes and emergency supplies, although financial donations are still being accepted by the municipal government at 205 East Eighth St. and by First Option Bank of Horton, 21101 West 223rd St. According to the bank, donations have been generous. Horton City Administration John Calhoon said donations and care packages have been received from communities all over the state and beyond.

“It’s heartwarming to be part of that sense of community, to see people not just in Horton, but in neighboring communities, our fellow Kansans, send care packages and give aid on behalf of the victims,” said Steve Handke, chief administrative officer of First Option Bank.

Calhoon offered his thanks to donors around the region for their support.

“I’ve received packages from Yates Center, Manhattan, Wichita, Nebraska,” he said. “We’ve had furniture offered, and more than enough clothing; we finally had to quit taking it. Gift cards, monetary donations, all of it is just incredible.”

The community and others nearby continues to step up to provide assistance. On Wednesday, hundreds of locals gathered at the Horton High School cafeteria for a benefit dinner originally planned to support David Potroff, a former HHS agriculture instructor who recently learned he has an inoperable brain tumor. However, donations were also received for the benefit of the Horton fire victims. Another benefit dinner on behalf of the victims took place on Friday in Everest.

Calhoon said he recently received a grateful message from the mother of one of the victims.

“Basically, she hit the nail on the head,” he said. “She said, ‘The Horton community and surrounding communities truly turned a tragedy into a blessing,’ for her daughter and her grandkids.”

Handke said he considers the support the community has generated for the victims to be a “great Christmas story.”

“Bad things happen sometimes, but when they do, it’s the good people who make the difference.”

The Brown County Sheriff K-9 officer Ari helped with a search in Richardson County, Neb., on Friday and locked in on a large amount of marijuana — pictured. Also retrieved was a stolen firearm.

Sheriff John Merchant said the K-9 officer Ari alerted on an area that yieled a large quantity of marijuana. Other drugs, paraphernalia and a stolen firearm from Olathe were all recovered in the search.

Three arrests were made by local authorities in Richardson County. 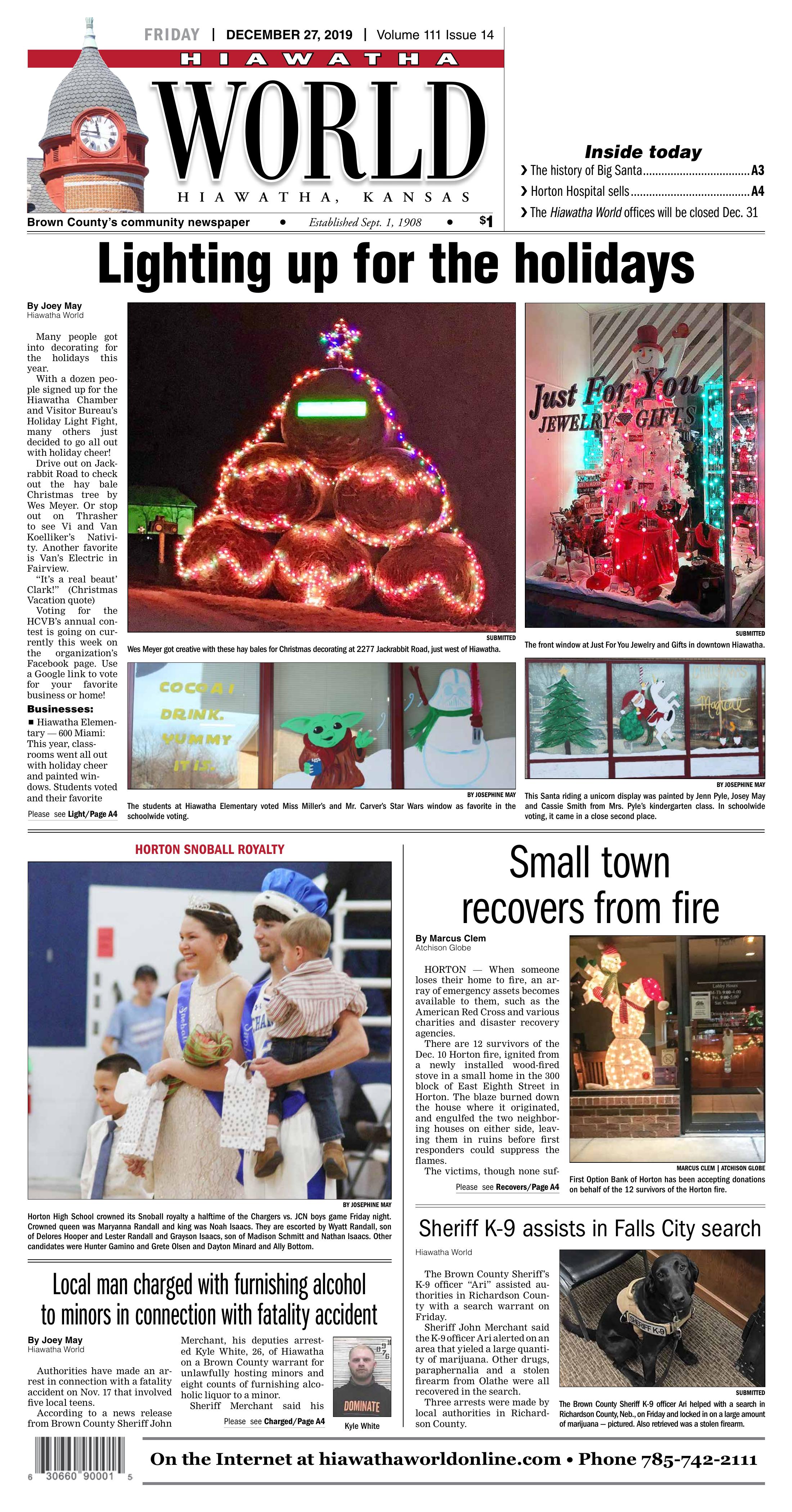