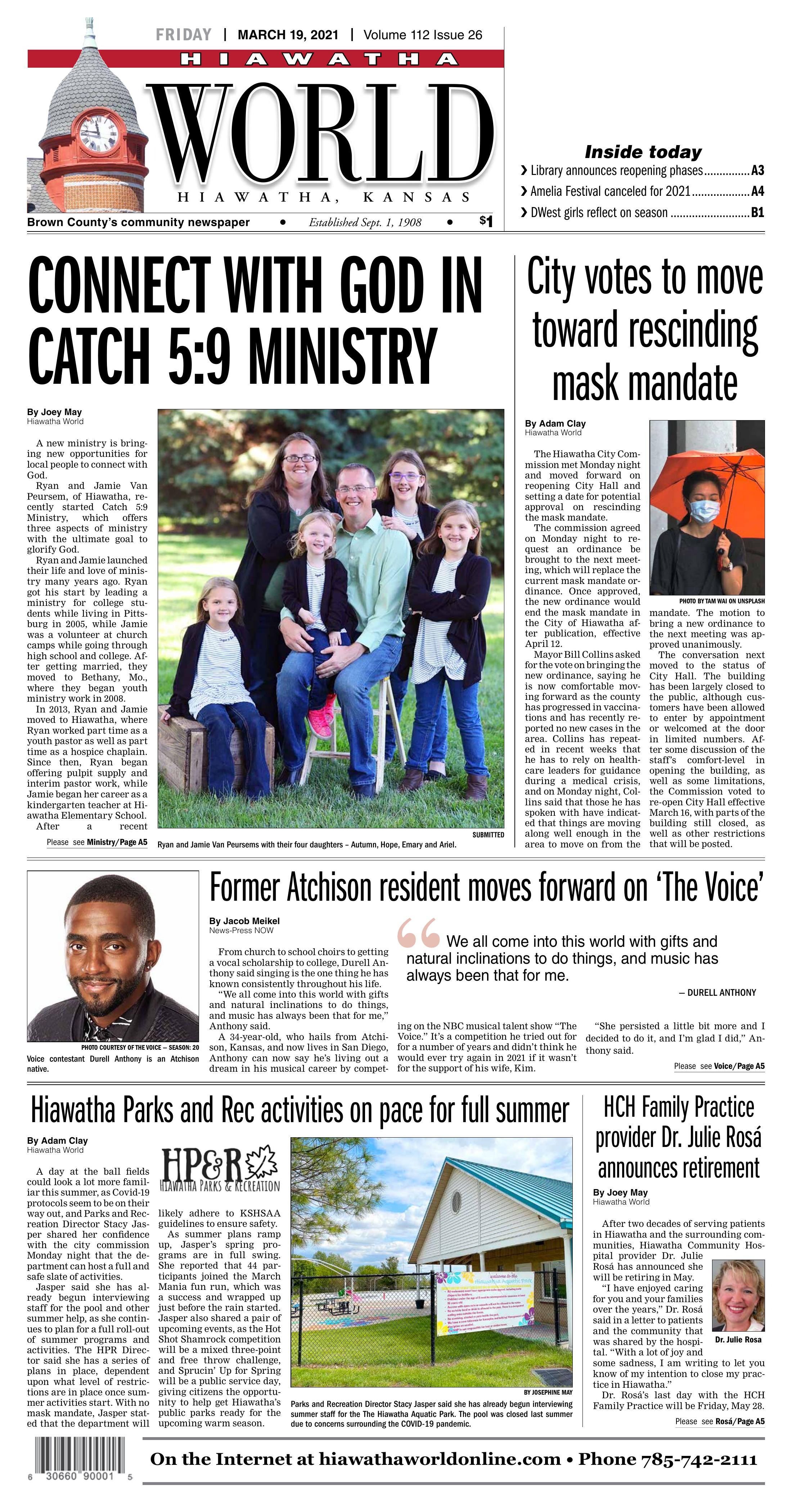 A new ministry is bringing new opportunities for local people to connect with God.

Ryan and Jamie launched their life and love of ministry many years ago. Ryan got his start by leading a ministry for college students while living in Pittsburg in 2005, while Jamie was a volunteer at church camps while going through high school and college. After getting married, they moved to Bethany, Mo., where they began youth ministry work in 2008.

In 2013, Ryan and Jamie moved to Hiawatha, where Ryan worked part time as a youth pastor as well as part time as a hospice chaplain. Since then, Ryan began offering pulpit supply and interim pastor work, while Jamie began her career as a kindergarten teacher at Hiawatha Elementary School.

After a recent employment with the video department at Rainbow Communications, Ryan decided it was time to devote his energies to a ministry that has been in his heart for many years. He left Rainbow’s full-time position, but noted that he may be a fill in videographer from time to time, but needed the time and energy to devote to Catch 5:9.

The name “Catch 5:9” comes from a few places. First off, Ryan said, it’s a reference to Luke 5:9, when Peter and his friends offer a catch of fish right after Jesus asks them to be fishers of men.

Another reference for Catch 5:9 is a memory from Ryan’s childhood. He said his father was a busy guy and the way they connected was by playing catch in the yard.

“No matter how busy his day was, he would still play catch with us,” he said. “I relate this to Jesus – he was busy and always makes time for us in prayer.”

Ryan said it’s also in memory of his daughter, Summer, who died 11 years ago. She was 5-pounds, 9 ounces when she was born.

“It’s kind of neat how it all worked out,” he said.

Catch 5:9 will be a ministry that involves both himself and Jamie. Currently, they have started their ministry with 3-minute devotional videos every Wednesday on their website www.catch59ministry.com. They will be offering grief ministry and counseling as well and he wanted to offer both his perspective and that of Jamie’s after what they have gone through. Ryan noted that counseling after the death of their daughter saved his marriage.

“At the time, we talked about starting our own ministry, to see what we could do to help others,” he said. “What would that ministry look like if it wasn’t tied to a church?”

The three-part ministry involves a focus on individual care, connecting with people and encouraging each other during difficult times.

“Sometimes people just need someone to listen, someone to trust,” he said.

Ryan said the second part of the ministry focuses on public speaking engagements – which could include speakers for Sunday morning services, a retreat or church camp or other event.

The third thing that Catch 5:9 wants to offer is through online encouragement, through the daily devotionals and weekly video bible studies.

Ryan said there is no charge for their counseling services and bible studies offered on their website. There is an opportunity to donate to those services if people are able to.

“We didn’t want finances to be a hindrance to helping people,” he said.

Ryan will continue to work part-time as a baseball coach for Hiawatha High School and also drives a school bus for activities for the school district. In addition, he offers play-by-play for Highland Community College athletics. He is currently an interim pastor at Zion Lutheran Church.

The Van Peursems have four daughters here on earth – Autumn, Hope, Emary and Ariel – along with a daughter, Summer, and a son, Jesse, who are both in heaven. Read more about their story on the website www.catch59ministry.com, where you can find out other information about their ministries. Contact Ryan and Jamie at (785) 288-0975 or by email at catch5.9ministry@gmail.com.

Photo courtesy of THE VOICE — Season: 20

From church to school choirs to getting a vocal scholarship to college, Durell Anthony said singing is the one thing he has known consistently throughout his life.

“We all come into this world with gifts and natural inclinations to do things, and music has always been that for me,” Anthony said.

A 34-year-old, who hails from Atchison, Kansas, and now lives in San Diego, Anthony can now say he’s living out a dream in his musical career by competing on the NBC musical talent show “The Voice.” It’s a competition he tried out for for a number of years and didn’t think he would ever try again in 2021 if it wasn’t for the support of his wife, Kim.

“She persisted a little bit more and I decided to do it, and I’m glad I did,” Anthony said.

For his song choice during the blind auditions in which he received two “chair turns” from judges, Anthony chose Marvin Gaye’s 1971 hit “What’s Going On,” a tune he feels resonates well in 2021.

“To bring that song back in a time like this, a song that I love and a lot of people love, I thought it was appropriate and it worked to my favor,” Anthony said.

Anthony chose John Legend as his coach for “The Voice” and feels being able to work with the Grammy-winning musician throughout the competition means everything.

“He’s done it all,” Anthony said. “He’s an EGOT, I believe, the Emmy, Grammy, Oscar and Tony. To work with someone like him and to be there to sing for him in person and then to see his personality and how laid back and how chill and how humble he was and how complimentary he was of my singing, it was just incredible.”

Anthony next will move on to the knockout rounds on the show, where he will continue to compete through the entirety of the competition, and he will do so with the support of many from Northeast Kansas and Northwest Missouri where he comes from.

“It’s just a great feeling to know that people back home are enjoying what I’m doing and following the journey,” Anthony said.

A day at the ball fields could look a lot more familiar this summer, as Covid-19 protocols seem to be on their way out, and Parks and Recreation Director Stacy Jasper shared her confidence with the city commission Monday night that the department can host a full and safe slate of activities.

Jasper said she has already begun interviewing staff for the pool and other summer help, as she continues to plan for a full roll-out of summer programs and activities. The HPR Director said she has a series of plans in place, dependent upon what level of restrictions are in place once summer activities start. With no mask mandate, Jasper stated that the department will likely adhere to KSHSAA guidelines to ensure safety.

As summer plans ramp up, Jasper’s spring programs are in full swing. She reported that 44 participants joined the March Mania fun run, which was a success and wrapped up just before the rain started. Jasper also shared a pair of upcoming events, as the Hot Shot Shamrock competition will be a mixed three-point and free throw challenge, and Sprucin’ Up for Spring will be a public service day, giving citizens the opportunity to help get Hiawatha’s public parks ready for the upcoming warm season. 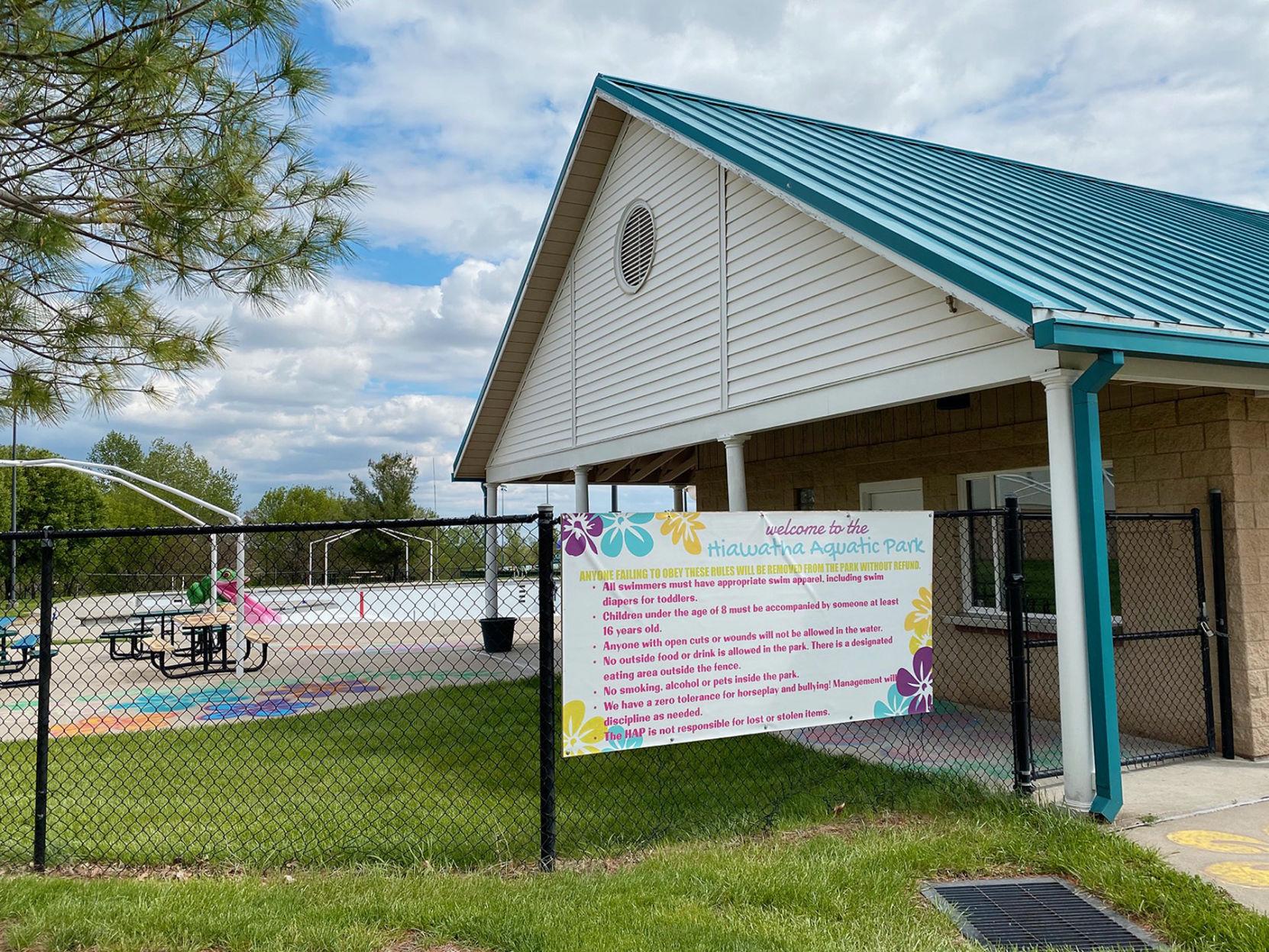 Parks and Recreation Director Stacy Jasper said she has already begun interviewing summer staff for the The Hiawatha Aquatic Park. The pool was closed last summer due to concerns surrounding the COVID-19 pandemic.

The Hiawatha City Commission met Monday night and moved forward on reopening City Hall and setting a date for potential approval on rescinding the mask mandate.

The commission agreed on Monday night to request an ordinance be brought to the next meeting, which will replace the current mask mandate ordinance. Once approved, the new ordinance would end the mask mandate in the City of Hiawatha after publication, effective April 12.

Mayor Bill Collins asked for the vote on bringing the new ordinance, saying he is now comfortable moving forward as the county has progressed in vaccinations and has recently reported no new cases in the area. Collins has repeated in recent weeks that he has to rely on healthcare leaders for guidance during a medical crisis, and on Monday night, Collins said that those he has spoken with have indicated that things are moving along well enough in the area to move on from the mandate. The motion to bring a new ordinance to the next meeting was approved unanimously.

The conversation next moved to the status of City Hall. The building has been largely closed to the public, although customers have been allowed to enter by appointment or welcomed at the door in limited numbers. After some discussion of the staff’s comfort-level in opening the building, as well as some limitations, the Commission voted to re-open City Hall effective March 16, with parts of the building still closed, as well as other restrictions that will be posted.

After two decades of serving patients in Hiawatha and the surrounding communities, Hiawatha Community Hospital provider Dr. Julie Rosá has announced she will be retiring in May.

“I have enjoyed caring for you and your families over the years,” Dr. Rosá said in a letter to patients and the community that was shared by the hospital. “With a lot of joy and some sadness, I am writing to let you know of my intention to close my practice in Hiawatha.”

Dr. Rosá’s last day with the HCH Family Practice will be Friday, May 28.

“As you all know, this practice is staffed with some of the most knowledgeable and caring providers in the country,” she said.

She encouraged her patients to select another HCH provider for their medical needs and said she and her staff will help.

“Please be assured that my staff and I will do everything we can to make the transition smooth and stress free,” she said. “It has been a great pleasure meeting and caring for you all. I sincerely appreciate your friendship and loyalty. I wish you continued good health and all the best in the coming years.”

Hiawatha Community Hospital CEO John Broberg has kept the city and county commissioners informed of the hospital’s recruitment efforts to replace not only Dr. Rosá, but also her husband, Dr. Pete Rosá and Dr. Bryon Bigham, both who will retire in 2022.