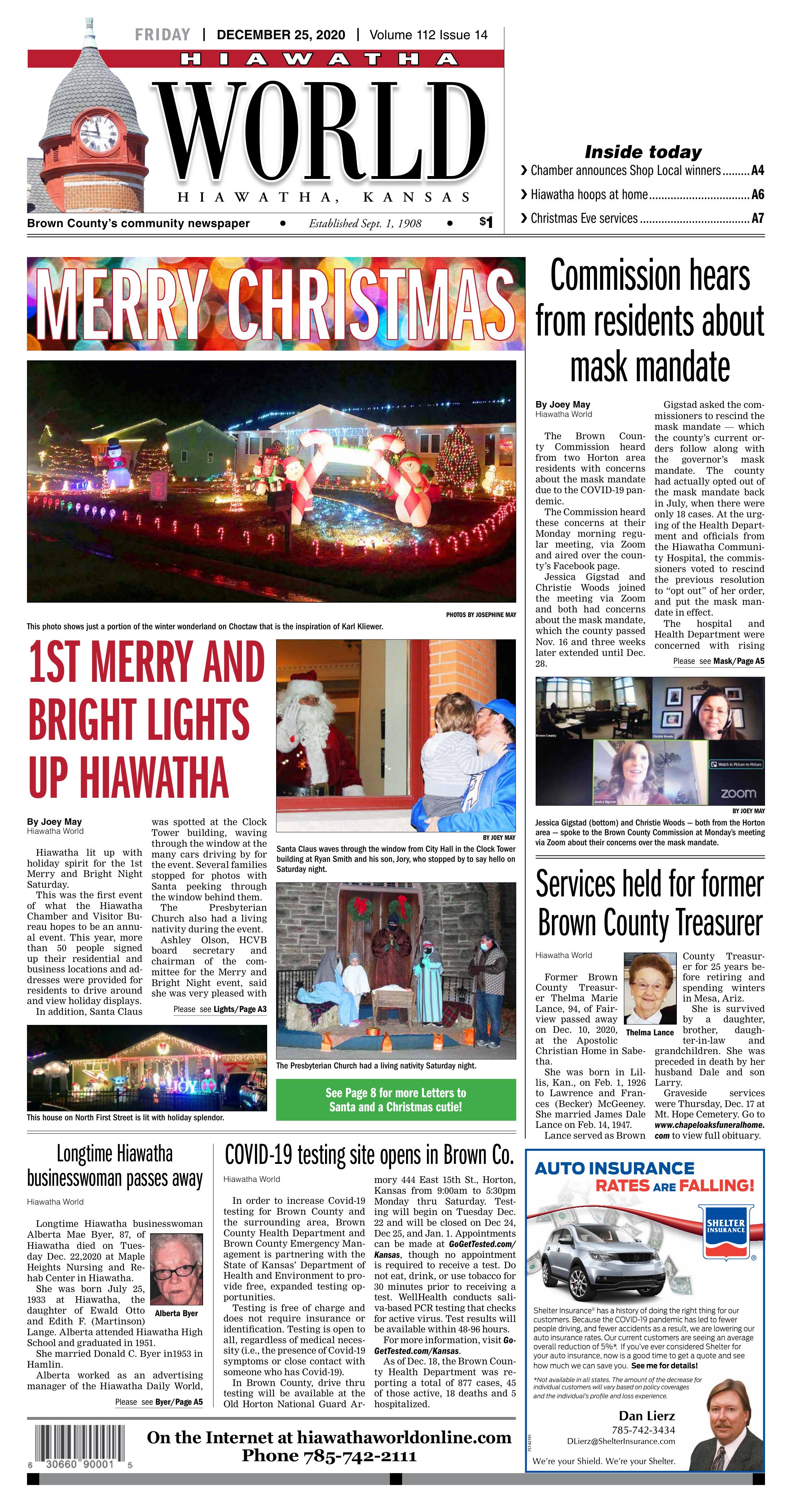 In order to increase Covid-19 testing for Brown County and the surrounding area, Brown County Health Department and Brown County Emergency Management is partnering with the State of Kansas’ Department of Health and Environment to provide free, expanded testing opportunities.

Testing is free of charge and does not require insurance or identification. Testing is open to all, regardless of medical necessity (i.e., the presence of Covid-19 symptoms or close contact with someone who has Covid-19).

In Brown County, drive thru testing will be available at the Old Horton National Guard Armory 444 East 15th St., Horton, Kansas from 9:00am to 5:30pm Monday thru Saturday. Testing will begin on Tuesday Dec. 22 and will be closed on Dec 24, Dec 25, and Jan. 1. Appointments can be made at GoGetTested.com/Kansas, though no appointment is required to receive a test. Do not eat, drink, or use tobacco for 30 minutes prior to receiving a test. WellHealth conducts saliva-based PCR testing that checks for active virus. Test results will be available within 48-96 hours.

As of Dec. 18, the Brown County Health Department was reporting a total of 877 cases, 45 of those active, 18 deaths and 5 hospitalized.

Santa Claus waves through the window from City Hall in the Clock Tower building at Ryan Smith and his son, Jory, who stopped by to say hello on Saturday night.

Joey May / By Joey May

The Presbyterian Church had a living nativity Saturday night.

Joey May / Photos by Josephine May

This photo shows just a portion of the winter wonderland on Choctaw that is the inspiration of Karl Kliewer.

St. Ann’s Church on Eighth Street had their nativity on display.

This house on North Second Street lit the sidewalk with luminarias.

This house was located on North Second.

Santa and Frosty in the big red truck is located on South 11th Street.

This house at Third and Shoshone lit up the neighborhood.

Merry Christmas from the Smith family on Cherokee Street.

This snowman was spotted on South Third.

This house on North First Street is lit with holiday splendor.

A tribute to The Christmas Story was spotted in the window about Wright’s Eclectibles.

This large lit Christmas tree was spotted on North Second.

A holiday unicorn was spotted on Navajo.

Hiawatha lit up with holiday spirit for the 1st Merry and Bright Night Saturday.

This was the first event of what the Hiawatha Chamber and Visitor Bureau hopes to be an annual event. This year, more than 50 people signed up their residential and business locations and addresses were provided for residents to drive around and view holiday displays.

The Presbyterian Church also had a living nativity during the event.

Ashley Olson, HCVB board secretary and chairman of the committee for the Merry and Bright Night event, said she was very pleased with the turnout. There was not a contest this year, but she said they just wanted everyone to spread holiday cheer by lighting up the town.

“I was extremely pleased with the turnout I witnessed for our 1st Annual Merry and Bright Night,” she said. “There were a lot of beautifully decorated houses and it made me smile to see so many cars driving up and down the streets of Hiawatha! I can’t wait for next year!”

The Hiawatha Chamber wanted to remind residents that the holiday ornament featuring the Brown County Historical Society is still available, as well as a limited number of the 2019 ornament, featuring Santa flying over the Clock Tower building. Contact the Chamber at 742-7136 or email hiawathachamber@rainbowtel.net.

She was born July 25, 1933 at Hiawatha, the daughter of Ewald Otto and Edith F. (Martinson) Lange. Alberta attended Hiawatha High School and graduated in 1951.

She married Donald C. Byer in1953 in Hamlin.

Alberta worked as an advertising manager of the Hiawatha Daily World, The Everest World and the Stockyard Journal from 1951-1965 and managed the Dew Drop Inn for 10 years before purchasing it in 1975 — managing it for a total of 53 years.

She was preceded in death by her husband and survivors include a son, Roger.

Services will be at 1:30 p.m. on Saturday, Dec. 26 at Chapel Oaks Funeral Home in Hiawatha. For full obituary go to www.chapeloaksfuneralhome.com.

Jessica Gigstad (bottom) and Christie Woods — both from the Horton area — spoke to the Brown County Commission at Monday’s meeting via Zoom about their concerns over the mask mandate.

The Brown County Commission heard from two Horton area residents with concerns about the mask mandate due to the COVID-19 pandemic.

The Commission heard these concerns at their Monday morning regular meeting, via Zoom and aired over the county’s Facebook page.

Jessica Gigstad and Christie Woods joined the meeting via Zoom and both had concerns about the mask mandate, which the county passed Nov. 16 and three weeks later extended until Dec. 28.

The hospital and Health Department were concerned with rising cases in late October and November — in which 500 cases were added just in November alone.

Gigstad said she also wanted the county to rescind any mass gathering guidelines as well. Currently, the county is prohibiting any gatherings over 50 people.

Gigstad said she felt that the county should not have a say over people’s actions on whether they gather or wear masks. She noted that the county active cases had declined since the mask mandate went into effect, but questioned whether that could be a proven result of wearing masks. She also pointed out that other cities and counties had mask mandates, but cases in those locations were still increasing, noting that despite people’s best efforts, they still can get COVID-19.

“Masking should be a personal choice,” she said.

Woods said she felt the same, but was also concerned with the unsanitary conditions wearing a mask created for her 7-year-old son. She said young children will chew on the masks and that creates dried saliva and bacteria. She said she switches out his masks daily for school, but has noticed the mask still becomes dirty rather quickly.

She was also concerned with making young children wear masks all day in school and said she kept her son home from school for the first three weeks of the mandate but has since allowed him back the past two weeks to finish the semester.

Woods said she felt the Horton School District has done a great job with keeping COVID cases low within the schools and that they were one of a few area schools who did not have to transition into remote learning due to issues.

The commission is set to consider the mask mandate again at next Monday’s regular meeting and Gigstad asked if they would hear comments from both sides — rather than just recommendations from the hospital and Health Department.

Commissioners said they felt they were hearing from many local residents, but also needed to hear updates from the county health officials. They determined they would allow a total of 10 minutes from each side Monday morning before making a determination on whether to extend the mask mandate in the county.

Brown County Emergency Management Director Don Pounds, along with members of the SPARK Committee, joined the meeting to make recommendations on dispersing additional funds from $90,000 that was returned from the initial allotment from the Hiawatha School District.

Pounds said the district actually requested $23,000 of those funds back to replace equipment that just failed last week after the month was returned and to replace some PPE.

The commissioners voted to accept the recommendations from the committee to pay out the remaining SPARKS funds, which had to be done by Dec. 31. Requests were made for a variety of reasons including lost income, purchasing PPE and other equipment due to COVID-19 regulations.

The commissioners revisited a request to consider providing bonuses to county employees since the funds were not there to give raises for 2021.

Commissioner Richard Lehmkuhl said he wanted to propose end-of-year bonuses of $1,000 for all full-time and $500 for all part-time. He said he felt the county employees have gone above and beyond this year and it was the first time to his knowledge the courthouse had to be closed for extended periods and employees were working remotely.

Commissioner Dwight Kruse said he would prefer giving bonuses based on a percentage of the salary, rather than a flat fee, noting that many of the employees had been with the county several years, while some may have just started their employment.

Commissioner Keith Olsen said he felt that the bonuses should be a flat amount and proposed $500 for non-elected full-time employees and $250 for part-time. He said this would total $35,000. Lehmkuhl said he felt the elected county employees deserved a bonus too.

Olson made his preference into a motion and Kruse seconded. The vote was 2-1 to provide full-time non-elected county employees a $500 bonus and part-time employees a $250 bonus. Lehmkuhl voted against the motion.

Commissioner Kruse presented a press release: Starting Tuesday, Dec. 22, drive thru testing will be available at the Horton National Guard Armory located at 444 East 15th Street in Horton. Testing will be closed Dec. 24th, 25th and

Jan. 1. Appointments can be made at GoGetTested.com/Kansas, though no appointment is required.

The commission revisited the request for funding for contract tracers at the Brown County Health Department for the first quarter of 2021. It was decided to leave it up to the new commission after the first of the year.

The commission reviewed the minutes of BCHS. It was announced that Delores Waite is resigning from the treasurer’s position. 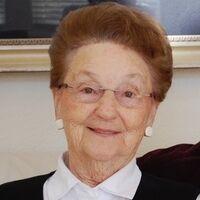 Former Brown County Treasurer Thelma Marie Lance, 94, of Fairview passed away on Dec. 10, 2020, at the Apostolic Christian Home in Sabetha.

Lance served as Brown County Treasurer for 25 years before retiring and spending winters in Mesa, Ariz.

She is survived by a daughter, brother, daughter-in-law and grandchildren. She was preceded in death by her husband Dale and son Larry.