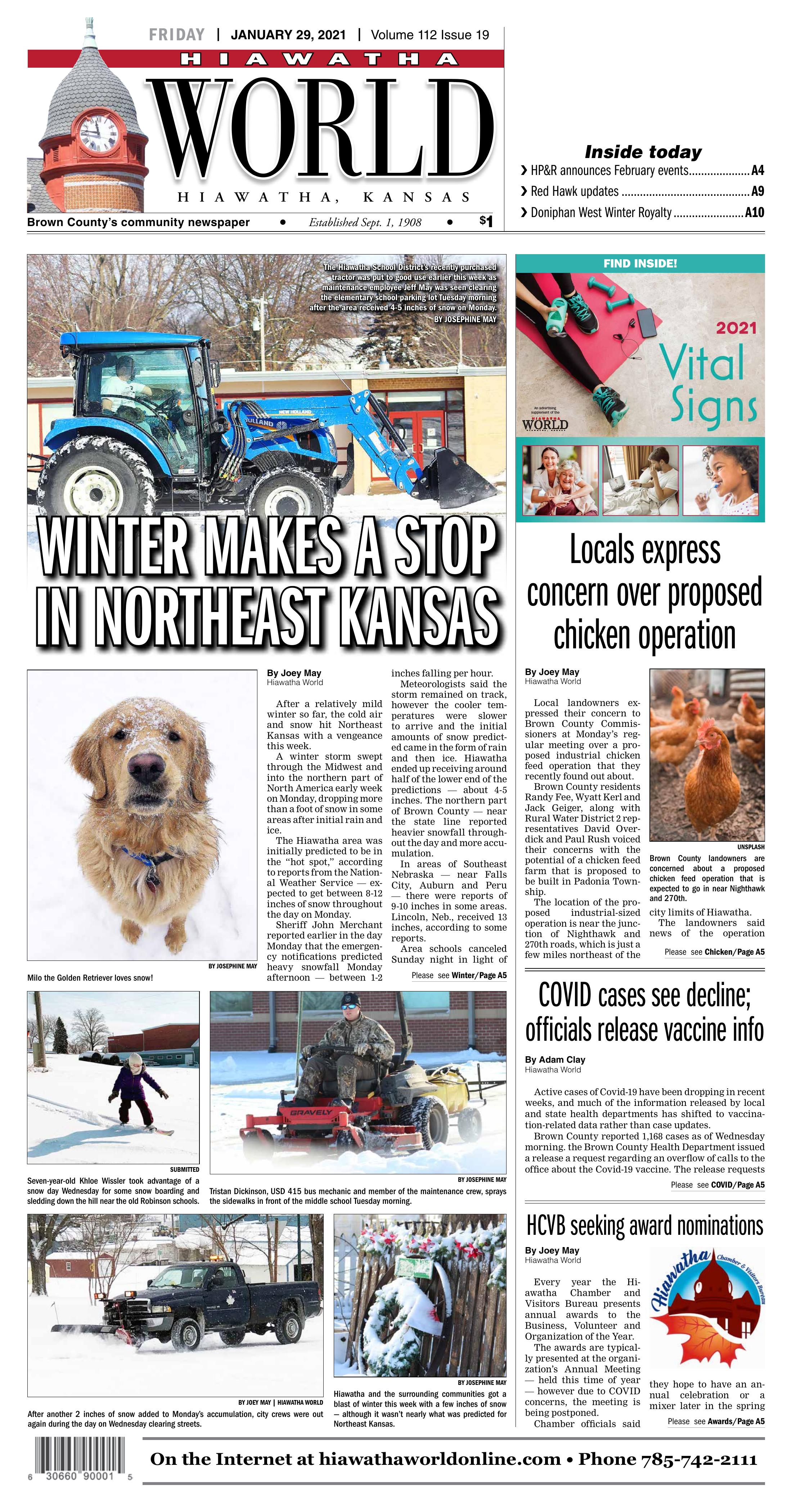 The Hiawatha School District’s recently purchased tractor was put to good use earlier this week as maintenance employee Jeff May was seen clearing the elementary school parking lot Tuesday morning after the area received 4-5 inches of snow on Monday.

Tristan Dickinson, USD 415 bus mechanic and member of the maintenance crew, sprays the sidewalks in front of the middle school Tuesday morning.

Hiawatha and the surrounding communities got a blast of winter this week with a few inches of snow — although it wasn’t nearly what was predicted for Northeast Kansas.

After another 2 inches of snow added to Monday’s accumulation, city crews were out again during the day on Wednesday clearing streets.

Seven-year-old Khloe Wissler took advantage of a snow day Wednesday for some snow boarding and sledding down the hill near the old Robinson schools.

After a relatively mild winter so far, the cold air and snow hit Northeast Kansas with a vengeance this week.

A winter storm swept through the Midwest and into the northern part of North America early week on Monday, dropping more than a foot of snow in some areas after initial rain and ice.

The Hiawatha area was initially predicted to be in the “hot spot,” according to reports from the National Weather Service — expected to get between 8-12 inches of snow throughout the day on Monday.

Meteorologists said the storm remained on track, however the cooler temperatures were slower to arrive and the initial amounts of snow predicted came in the form of rain and then ice. Hiawatha ended up receiving around half of the lower end of the predictions — about 4-5 inches. The northern part of Brown County — near the state line reported heavier snowfall throughout the day and more accumulation.

In areas of Southeast Nebraska — near Falls City, Auburn and Peru — there were reports of 9-10 inches in some areas. Lincoln, Neb., received 13 inches, according to some reports.

Area schools canceled Sunday night in light of the predictions of ice and heavy snow. Local residents awoke to ice pelting windows in the Hiawatha area and the snow started later morning and continued throughout the afternoon and during brief periods in the evening hours and overnight.

On Tuesday night, another 2 inches added to what had already accumulated from Monday’s storm.

Hiawatha and Horton schools called off for Tuesday and Wednesday as well, due to road conditions within the county, however the Girls Basketball Classic was still held for Tuesday night at Hiawatha.

School maintenance crews in Hiawatha worked throughout the day Monday and Tuesday morning to clear school property and then again all day Wednesday after the latest flakes added up. City crews worked on streets overnight Monday and the downtown streets were cleared. After Tuesday night’s additional snow, city crews were seen out during the day on Wednesday clearing roads to keep them safe.

This was the last winter storm predicted for the upcoming days and temperatures were expected to rise into the upper 30s and lower 40s with rain expected on Saturday.

Brown County landowners are concerned about a proposed chicken feed operation that is expected to go in near Nighthawk and 270th.

Local landowners expressed their concern to Brown County Commissioners at Monday’s regular meeting over a proposed industrial chicken feed operation that they recently found out about.

Brown County residents Randy Fee, Wyatt Kerl and Jack Geiger, along with Rural Water District 2 representatives David Overdick and Paul Rush voiced their concerns with the potential of a chicken feed farm that is proposed to be built in Padonia Township.

The location of the proposed industrial-sized operation is near the junction of Nighthawk and 270th roads, which is just a few miles northeast of the city limits of Hiawatha.

The landowners said news of the operation reached them just by word of mouth and no one from the company proposing to start construction as early as later February has contacted neighbors to inform them the business was going in.

Sheriff John Merchant was also in attendance at the meeting and he told commissioners his land is also near the area of the proposed chicken feed operation and he was not provided any information either. Commissioners said this was news to them as well.

Sheriff Merchant said several of the area landowners have approached him with concerns, especially about the water supply.

“That water supplies thousands of families, not only in our county but in others,” he said.

Sheriff Merchant also pointed out this could depreciate values of adjacent farms.

A huge concern was wear and tear on the local roads — some which are low maintenance — if semis of chickens and feed would be in and out on a regular basis instead of just seasonal harvest traffic. In addition, the RWD2 representatives pointed out the location was near an aquifer that fed wells providing water for the rural water district and there was a worry about contamination from chicken manure and dead animals.

Jack Geiger, one of the landowners, said he found out about the proposed business through a friend who saw permits for the construction at the state level. He asked the commissioners if they could help facilitate a public meeting with the Kansas Department of Health and Environment for area landowners to express their concerns.

Commissioner Richard Lehmkuhl said he would ask County Attorney Kevin Hill about to the potential of drafting a letter from the county to KDHE to prompt a public hearing. Lehmkuhl said the commission’s hands were tied since the county was not zoned.

He also encouraged the landowners to send their letters as well to the state to “make their voices heard” in hopes of getting a public hearing set before the proposed onset of potential construction, though to be set for Feb. 20.

Mikaela Moore, HFED director, presented the Annual Microloan Program for the commissioner’s approval. Moore also updated the commission on the happenings at HFED. The ROZ program is due to sunset in June of 2021, unless there is a change in the legislation.

County Attorney, Kevin Hill, discussed the contracts with Hamm’s. The rate increase in addendum five to the contract indicates rate increase would be calculated with the consumer price index. Hill also reported on the trailer fires at the landfill.

County Attorney, Kevin Hill, discussed the contracts with Hamm’s. The rate increase in addendum five to the contract indicates rate increase would be calculated with the consumer price index. Hill also reported on the trailer fires at the landfill.

Active cases of Covid-19 have been dropping in recent weeks, and much of the information released by local and state health departments has shifted to vaccination-related data rather than case updates.

Brown County reported 1,168 cases as of Wednesday morning. the Brown County Health Department issued a release a request regarding an overflow of calls to the office about the Covid-19 vaccine. The release requests patients from citizens as new doses are expected to arrive weekly, but in a limited amount. Anyone signed up for the vaccine will be contacted with an appointment time when information is available.

Nemaha County Community Health Services released a new set of county numbers on Tuesday, with active cases down to 8, total positive cases at 1,406 and deaths at 50. Doniphan County released an active case total of 17 late last week. Both counties announced that they are entering Phase 2 of vaccine administration, and information is available on their Facebook pages.

Kansas Governor Laura Kelly announced a statewide Covid-19 vaccination dashboard available on the Kansas Department of Health and Environment website. The dashboard lists all three local counties as having received a total of 100 doses of vaccinations. According to the dashboard, as of Monday, 132,145 Kansas have been vaccinated with 157,520 total doses administered and 255,550 vaccine doses distributed.

Every year the Hiawatha Chamber and Visitors Bureau presents annual awards to the Business, Volunteer and Organization of the Year.

The awards are typically presented at the organization’s Annual Meeting — held this time of year — however due to COVID concerns, the meeting is being postponed.

Chamber officials said they hope to have an annual celebration or a mixer later in the spring or early summer, depending on the health climate of the city and taking COVID cases into account. This event potentially could be held outside to better assure social distancing.

In the meantime, the HCVB is still taking nominations for these three annual awards from the community. Nominations will be taken through next week and then the list of nominees will be sent out to Chamber members for a vote.

You can also share your nomination with the Chamber by calling 742-7136 or by emailing hiawathachamber@rainbowtel.net.