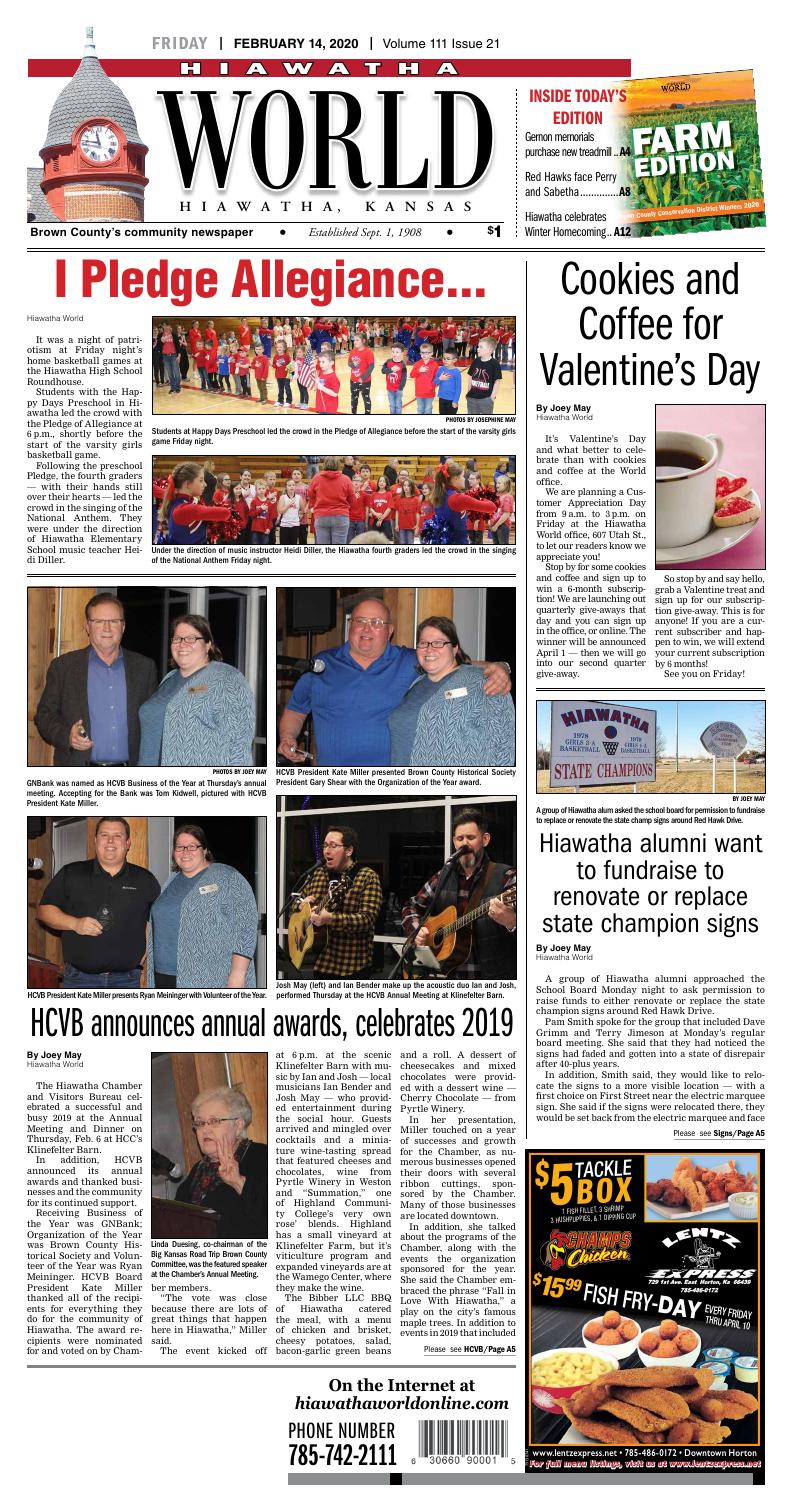 Students at Happy Days Preschool led the crowd in the Pledge of Allegiance before the start of the varsity girls game Friday night.

Under the direction of music instructor Heidi Diller, the Hiawatha fourth graders led the crowd in the singing of the National Anthem Friday night.

It was a night of patriotism at Friday night’s home basketball games at the Hiawatha High School Roundhouse.

Students with the Happy Days Preschool in Hiawatha led the crowd with the Pledge of Allegiance at 6 p.m., shortly before the start of the varsity girls basketball game.

Following the preschool Pledge, the fourth graders — with their hands still over their hearts — led the crowd in the singing of the National Anthem. They were under the direction of Hiawatha Elementary School music teacher Heidi Diller.

GNBank was named as HCVB Business of the Year at Thursday’s annual meeting. Accepting for the Bank was Tom Kidwell, pictured with HCVB President Kate Miller.

Josh May (left) and Ian Bender make up the acoustic duo Ian and Josh, performed Thursday at the HCVB Annual Meeting at Klinefelter Barn.

It was a full house Thursday at the Hiawatha Chamber and Visitors Bureau’s Annual Meeting and Dinner at Klinefelter Barn.

The Hiawatha Chamber and Visitors Bureau celebrated a successful and busy 2019 at the Annual Meeting and Dinner on Thursday, Feb. 6 at HCC’s Klinefelter Barn.

In addition, HCVB announced its annual awards and thanked businesses and the community for its continued support.

Receiving Business of the Year was GNBank; Organization of the Year was Brown County Historical Society and Volunteer of the Year was Ryan Meininger. HCVB Board President Kate Miller thanked all of the recipients for everything they do for the community of Hiawatha. The award recipients were nominated for and voted on by Chamber members.

“The vote was close because there are lots of great things that happen here in Hiawatha,” Miller said.

The event kicked off at 6 p.m. at the scenic Klinefelter Barn with music by Ian and Josh — local musicians Ian Bender and Josh May — who provided entertainment during the social hour. Guests arrived and mingled over cocktails and a miniature wine-tasting spread that featured cheeses and chocolates, wine from Pyrtle Winery in Weston and “Summation,” one of Highland Community College’s very own rose’ blends. Highland has a small vineyard at Klinefelter Farm, but it’s viticulture program and expanded vineyards are at the Wamego Center, where they make the wine.

The Bibber LLC BBQ of Hiawatha catered the meal, with a menu of chicken and brisket, cheesy potatoes, salad, bacon-garlic green beans and a roll. A dessert of cheesecakes and mixed chocolates were provided with a dessert wine — Cherry Chocolate — from Pyrtle Winery.

In her presentation, Miller touched on a year of successes and growth for the Chamber, as numerous businesses opened their doors with several ribbon cuttings, sponsored by the Chamber. Many of those businesses are located downtown.

In addition, she talked about the programs of the Chamber, along with the events the organization sponsored for the year. She said the Chamber embraced the phrase “Fall in Love With Hiawatha,” a play on the city’s famous maple trees. In addition to events in 2019 that included the January Annual Meeting, the Chamber hosted a Spring Tea, Easter Egg Hunt, Fourth of July event, the very popular Maple Leaf Festival, Halloween Frolic events that included a Night at the Museum, Cemetery Tours and of course the time-honored tradition of two Halloween parades, and several Christmas events that included partnering with the Downtown Business Group for Jingle and Mingle.

In 2019, the Chamber created the award Mr. and Mrs. Hiawatha — which was given to Jere and Patty Bruning for the inaugural year. The Chamber installed a new sign on the north entrance from U.S. 73 — a design by Chamber board member Andy Runer.

Also implemented was the Chamber of the Month program, and a regular newsletter. In addition, the Chamber created its own holiday card and ornament — designed by Miller herself — as a fundraiser to recreate a Mrs. Krebs’ garden in Hiawatha — with a giant pumpkin right in the middle!

“We want to celebrate you — we just need your help,” Miller said, encouraging businesses to get involved in Chamber activities — by way of serving on the board, or as an ambassador to help with specific events or to reach out to other business owners.

This year, the Chamber has a few more events in store — with “Whimsy and Paint” coming soon — a wine and painting event.

The Chamber has been planning for the Big Kansas Road Trip — set to hit Nemaha, Brown and Doniphan counties May 7-10. Linda Duesing and Connie Werner are county co-chairwomen and have been working diligently with area communities to celebrate our county and prepare for visitors. Miller said this event is sponsored by the Kansas Sampler Foundation and it could bring a half million in revenue to the area.

In addition, the Chamber has participated in several “Shop and Hops,” which bring interested shoppers to town by way of a bus that hits several communities in one day in a scheduled event and plan to continue those this coming year.

Featured speaker at the event was Linda Duesing about the BKRT. Duesing started out by introducing little known facts about Brown, Nemaha and Doniphan counties.

Some of these questions that made the guests ponder included “What three towns have banks with murals?” “What community has John Riggins Avenue?” “What county has the Glacial Hills Scenic Byway?” just to name a few.

Duesing said the Big Kansas Road Trip is the brainchild of Marci Penner with the Kansas Sampler. Each year a large festival was held and communities in Kansas were invited to come and share everything they could about their towns. The annual road show got costly and Penner wanted people to travel throughout Kansas to see the amazing things there and so invented the Big Kansas Road Trip two years ago. The first year, three counties in southern Kansas were featured and then in 2019 far western Kansas.

This year, the BKRT hits Nemaha, Brown and Doniphan counties and the idea is that we just be ourselves, but show it off in a way that people fall in love with our communities.

A guidebook is being created that will highlight activities in all three counties, along with businesses, organizations and much more. These will become available in March as Penner and crew will distribute them throughout the state for the “Explorers” who plan to visit!

In Hiawatha, the Morrill Public Library and the Chamber office will be information centers for visitors to stop by to pick up guidebooks and obtain information. Several special activities — and then the normal activities will be highlighted. Among those include a Harlan Shuster photo display in Morrill, a Shane Spangler and Sarah Kleopfer concert, skits at the Birdcage Theatre, the Ruby Slipper Goat Rescue will be open, a jazz concert at the courthouse and so much more!

The meeting closed with the presentation of awards and many thanks!

Penner will also have “stump” presentations in each county. Mark your calendars for the Big Kansas Road Trip!

Current board members are: President-Kate Miller, Vice President-Joey May, Treasurer-Debbie Phillips, Secretary-Ashley Olson, members at large-Lynn Allen, Andy Runer, Lacey Conlin and Bonnie Marable. HCVB Administrator is Sarah Kleopfer. Contact the Chamber at 742-7136 or by email at hiawathachamber@rainbowtel.net to become a Chamber business member, to express interest in serving on the board or as a Chamber ambassador.

It’s Valentine’s Day and what better to celebrate than with cookies and coffee at the World office.

We are planning a Customer Appreciation Day from 9 a.m. to 3 p.m. on Friday at the Hiawatha World office, 607 Utah St., to let our readers know we appreciate you!

Stop by for some cookies and coffee and sign up to win a 6-month subscription! We are launching out quarterly give-aways that day and you can sign up in the office, or online. The winner will be announced April 1 — then we will go into our second quarter give-away.

See you on Friday!

A group of Hiawatha alum asked the school board for permission to fundraise to replace or renovate the state champ signs around Red Hawk Drive.

A group of Hiawatha alumni approached the School Board Monday night to ask permission to raise funds to either renovate or replace the state champion signs around Red Hawk Drive.

Pam Smith spoke for the group that included Dave Grimm and Terry Jimeson at Monday’s regular board meeting. She said that they had noticed the signs had faded and gotten into a state of disrepair after 40-plus years.

In addition, Smith said, they would like to relocate the signs to a more visible location — with a first choice on First Street near the electric marquee sign. She said if the signs were relocated there, they would be set back from the electric marquee and face west. She also proposed relocating the state cross country sign — which is located toward the exit of Red Hawk Drive — also to this area.

A secondary choice for a location would be to place the football and basketball signs near the cross country sign. Smith said the current location is not visible enough, as trees have been planted around the curve and obscure the view.

Smith said the estimated cost would be around $4,000 for the project and this also allowed money for future maintenance. Board Clerk Sarah Windmeyer said there was around $1,000 in reserves for this project — money that had been previously donated. Smith also asked if donations could come to the district so they could be tax deductible.

Board members were in favor of this project, and board member John Wright said he envisioned that a new sign could have places for multiple years to mark state champions.

Smith said they hoped to raise the money and have the football sign ready by this coming fall — which would mark 40 years since Hiawatha won the state championship in football. They were working with a local graphic design artist.

She estimated the basketball sign would also be ready by graduation weekend.

Board members voted to allow the group to move forward on this project and to allow donations to be sent to the USD 415 School District, allowing for a tax deduction. 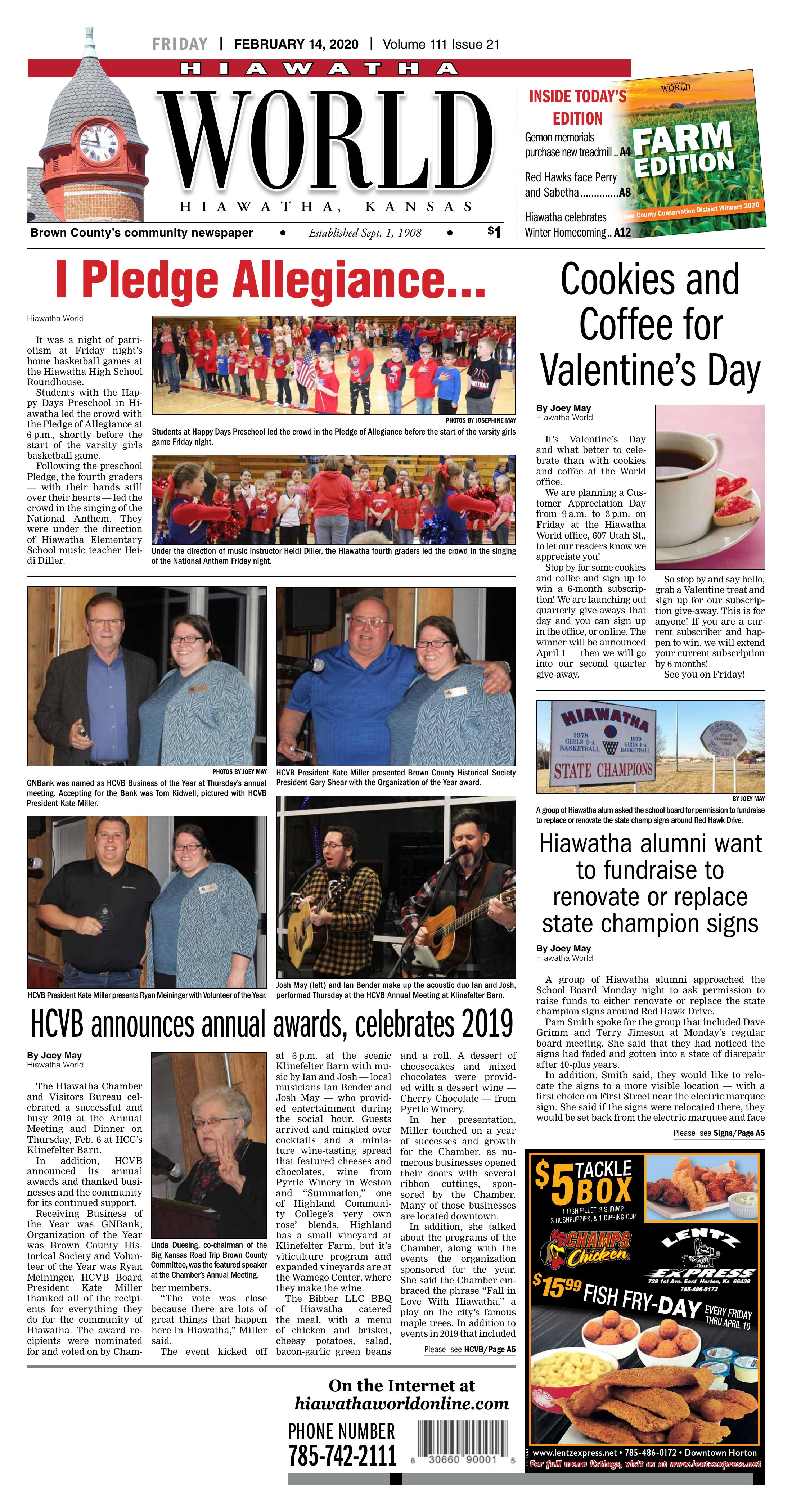