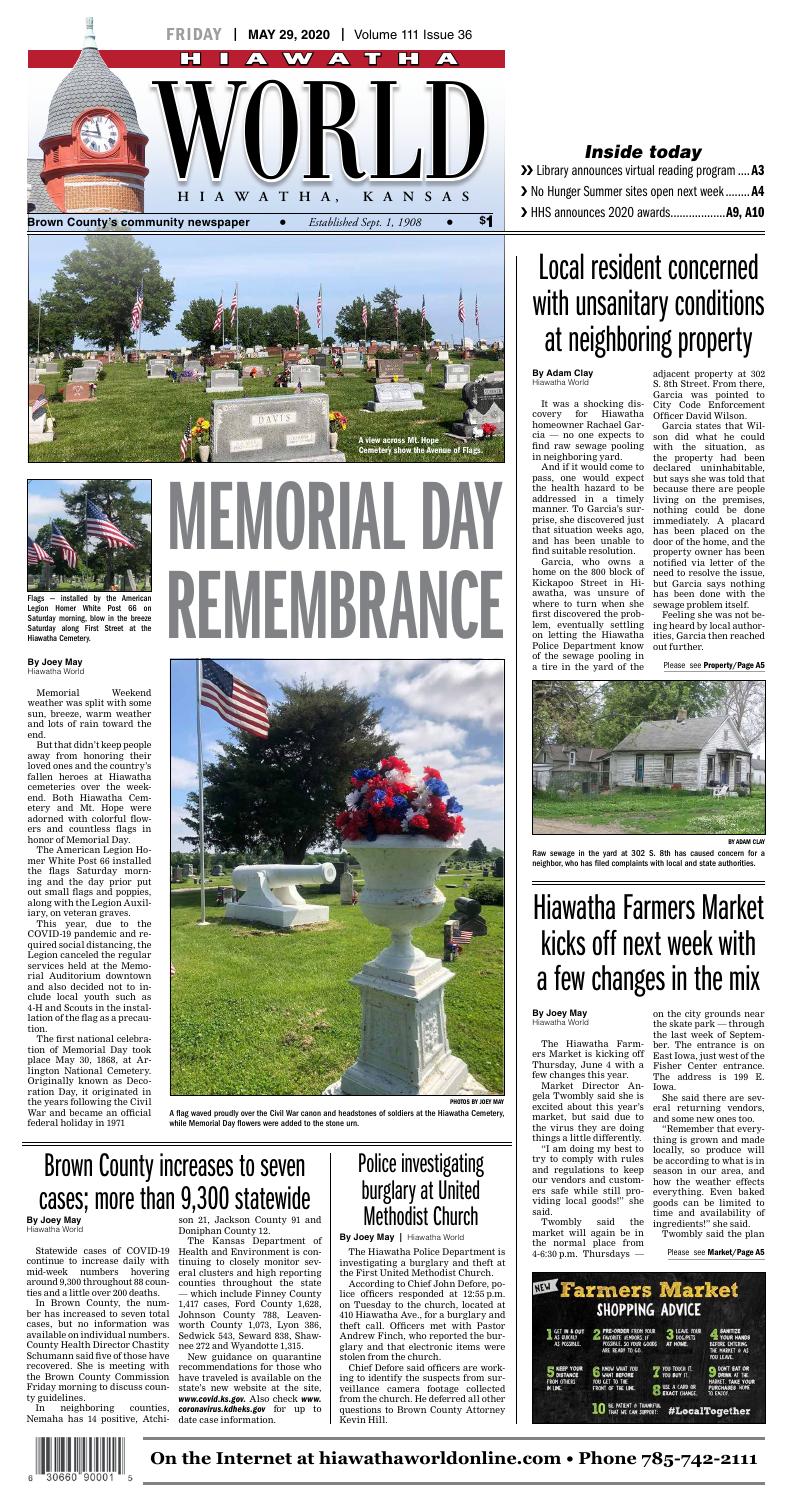 A flag waved proudly over the Civil War canon and headstones of soldiers at the Hiawatha Cemetery, while Memorial Day flowers were added to the stone urn.

Flags — installed by the American Legion Homer White Post 66 on Saturday morning, blow in the breeze Saturday along First Street at the Hiawatha Cemetery.

Joey May / By Joey May

The Avenue of Flags waves proudly in the wind at the Mt. Hope Cemetery.

A view across Mt. Hope Cemetery show the Avenue of Flags.

Flags decorate the graves of soldiers near the veterans memorial at Hiawatha Cemetery.

Memorial Weekend weather was split with some sun, breeze, warm weather and lots of rain toward the end.

But that didn’t keep people away from honoring their loved ones and the country’s fallen heroes at Hiawatha cemeteries over the weekend. Both Hiawatha Cemetery and Mt. Hope were adorned with colorful flowers and countless flags in honor of Memorial Day.

The American Legion Homer White Post 66 installed the flags Saturday morning and the day prior put out small flags and poppies, along with the Legion Auxiliary, on veteran graves.

This year, due to the COVID-19 pandemic and required social distancing, the Legion canceled the regular services held at the Memorial Auditorium downtown and also decided not to include local youth such as 4-H and Scouts in the installation of the flag as a precaution.

The first national celebration of Memorial Day took place May 30, 1868, at Arlington National Cemetery. Originally known as Decoration Day, it originated in the years following the Civil War and became an official federal holiday in 1971

The Hiawatha Police Department is investigating a burglary and theft at the First United Methodist Church.

According to Chief John Defore, police officers responded at 12:55 p.m. on Tuesday to the church, located at 410 Hiawatha Ave., for a burglary and theft call. Officers met with Pastor Andrew Finch, who reported the burglary and that electronic items were stolen from the church.

Chief Defore said officers are working to identify the suspects from surveillance camera footage collected from the church. He deferred all other questions to Brown County Attorney Kevin Hill.

Statewide cases of COVID-19 continue to increase daily with mid-week numbers hovering around 9,300 throughout 88 counties and a little over 200 deaths.

In Brown County, the number has increased to seven total cases, but no information was available on individual numbers. County Health Director Chastity Schumann said five of those have recovered. She is meeting with the Brown County Commission Friday morning to discuss county guidelines.

New guidance on quarantine recommendations for those who have traveled is available on the state’s new website at the site, www.covid.ks.gov. Also check www.coronavirus.kdheks.gov for up to date case information.

Raw sewage in the yard at 302 S. 8th has caused concern for a neighbor, who has filed complaints with local and state authorities.

It was a shocking discovery for Hiawatha homeowner Rachael Garcia — no one expects to find raw sewage pooling in neighboring yard.

And if it would come to pass, one would expect the health hazard to be addressed in a timely manner. To Garcia’s surprise, she discovered just that situation weeks ago, and has been unable to find suitable resolution.

Garcia, who owns a home on the 800 block of Kickapoo Street in Hiawatha, was unsure of where to turn when she first discovered the problem, eventually settling on letting the Hiawatha Police Department know of the sewage pooling in a tire in the yard of the adjacent property at 302 S. 8th Street. From there, Garcia was pointed to City Code Enforcement Officer David Wilson.

Garcia states that Wilson did what he could with the situation, as the property had been declared uninhabitable, but says she was told that because there are people living on the premises, nothing could be done immediately. A placard has been placed on the door of the home, and the property owner has been notified via letter of the need to resolve the issue, but Garcia says nothing has been done with the sewage problem itself.

Feeling she was not being heard by local authorities, Garcia then reached out further.

“We filed a report with Eric Glave from the Kansas Department of Health and Environment…[as well as] the NRC and the EPA.” But Garcia says the larger agencies pointed them right back to local agencies.

Garcia said she went so far as to reach out to Hiawatha Wastewater Superintendent Dave Grimm.

“Mr. Grimm was very sympathetic,” says Garcia, “but said there was almost nothing he could do legally.”

Things turned from bad to worse two weeks ago, when Garcia’s son was exposed to the raw sewage, and the mother reports that the boy was quite sick for over a week.

“My son is better now, but it took a week of crying, not sleeping, not eating, severe fatigue and pain to get through,” she said.

In response to a request for information, City Code Enforcer Wilson stated that he appreciated the interest but that he is not in a capacity to discuss information relative to people or property encountered during the course of his work.

City Attorney Andy Delaney did respond on behalf of the city, clarifying the facts of the situation and the difficulty the city is having resolving the issue. Delaney informed the Hiawatha World that the problem came to be due to water not being turned on at the property, and outside water filling toilet tanks not providing the necessary pressure to ensure the sewage left the property. Delaney stated that the city’s sewer department performed an inspection and determined that the situation led to a blockage and a subsequent leak that occurred on the homeowner’s property, and thus the responsibility is solely their own.

Delaney stated further that the residents of the home have been cited for a nuisance violation. But that is where the situation gets tricky legally. Due to COVID-19, the court system has been shut down for some time, leading to a lack of any forward movement or resolution on this and many other situations that would ideally be dealt with quickly.

With courts tentatively scheduled to resume, Delaney did say, “It is my understanding that the resident is set to appear in court on June 2.”

The Hiawatha Farmers Market is kicking off Thursday, June 4 with a few changes this year.

Market Director Angela Twombly said she is excited about this year’s market, but said due to the virus they are doing things a little differently.

“I am doing my best to try to comply with rules and regulations to keep our vendors and customers safe while still providing local goods!” she said.

Twombly said the market will again be in the normal place from 4-6:30 p.m. Thursdays — on the city grounds near the skate park — through the last week of September. The entrance is on East Iowa, just west of the Fisher Center entrance. The address is 199 E. Iowa.

She said there are several returning vendors, and some new ones too.

“Remember that everything is grown and made locally, so produce will be according to what is in season in our area, and how the weather effects everything. Even baked goods can be limited to time and availability of ingredients!” she said.

Twombly said the plan for this year is to move the vendor booths forward, still keeping that horseshoe shape they used last year. The parking will be in the same general area, but Twombly need to leave room for people to easily get in and out of the market. Starting along the north, behind the vendors, will now be a drive-through lane — for pre-orders only. Twombly advised to please follow the marked area and do not drive into the neighboring property.

Customers will need to get a hold of vendors prior to the market to find out what items are available and she said that information is also available on the Facebook page and the upcoming map that will also be posted on the Facebook page. This map will show a layout of what the market will look like. It will show where to drive, and where to walk. These will both be one-way lanes. The walking lane will go in the opposite direction of the driving lane, In front of the vendor booths.

Twombly said customers and vendors will still need to follow the guidelines of social distancing and she asked everyone please be patient as they work through this process.

“The vendors are happy to be preparing for our first market, this Thursday. June 4,” she said. “The season will go all the way through until the last week of September! We are all looking forward to a great summer. Hoping for good weather, and that everyone stays happy and healthy!” 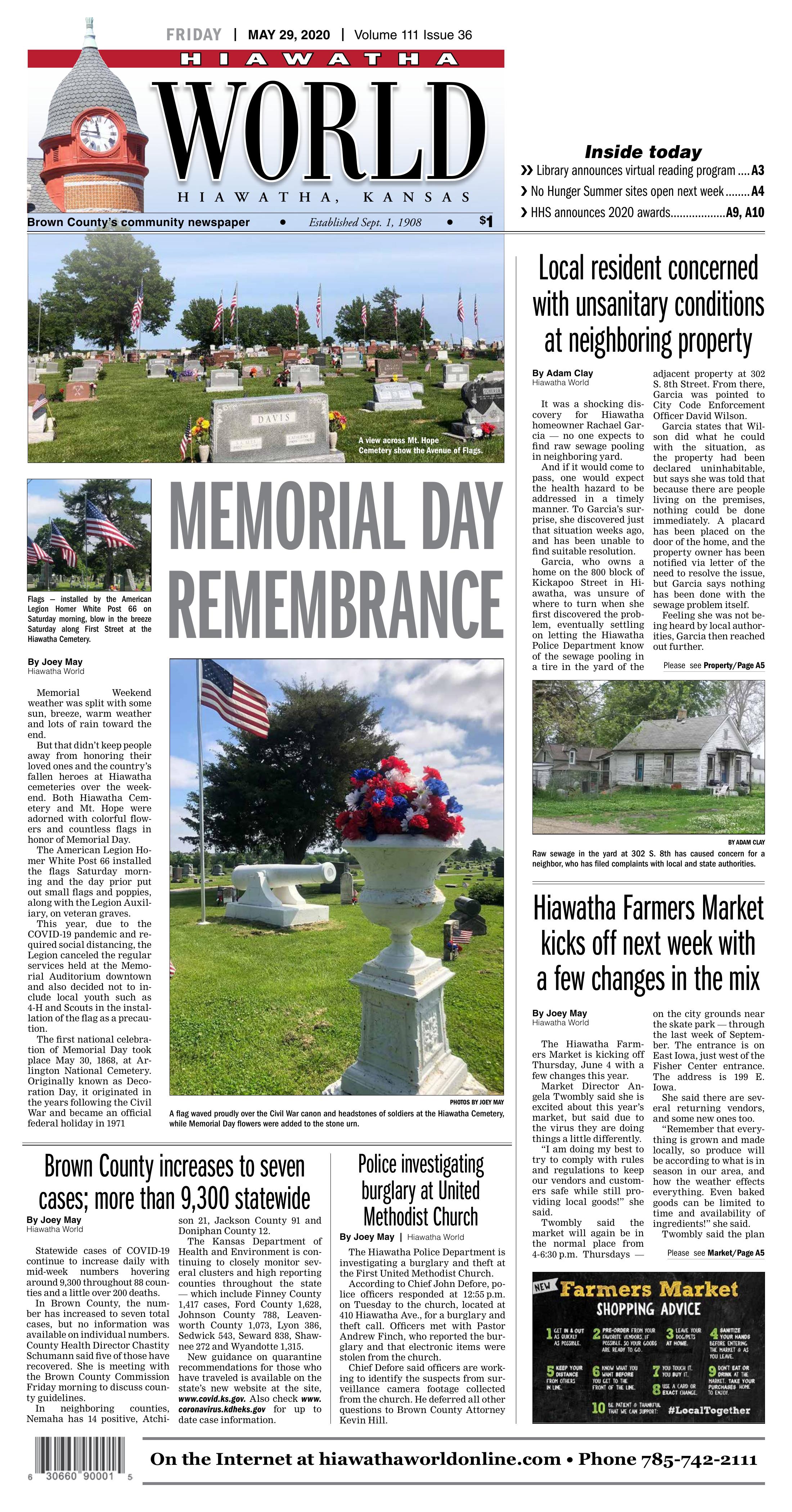