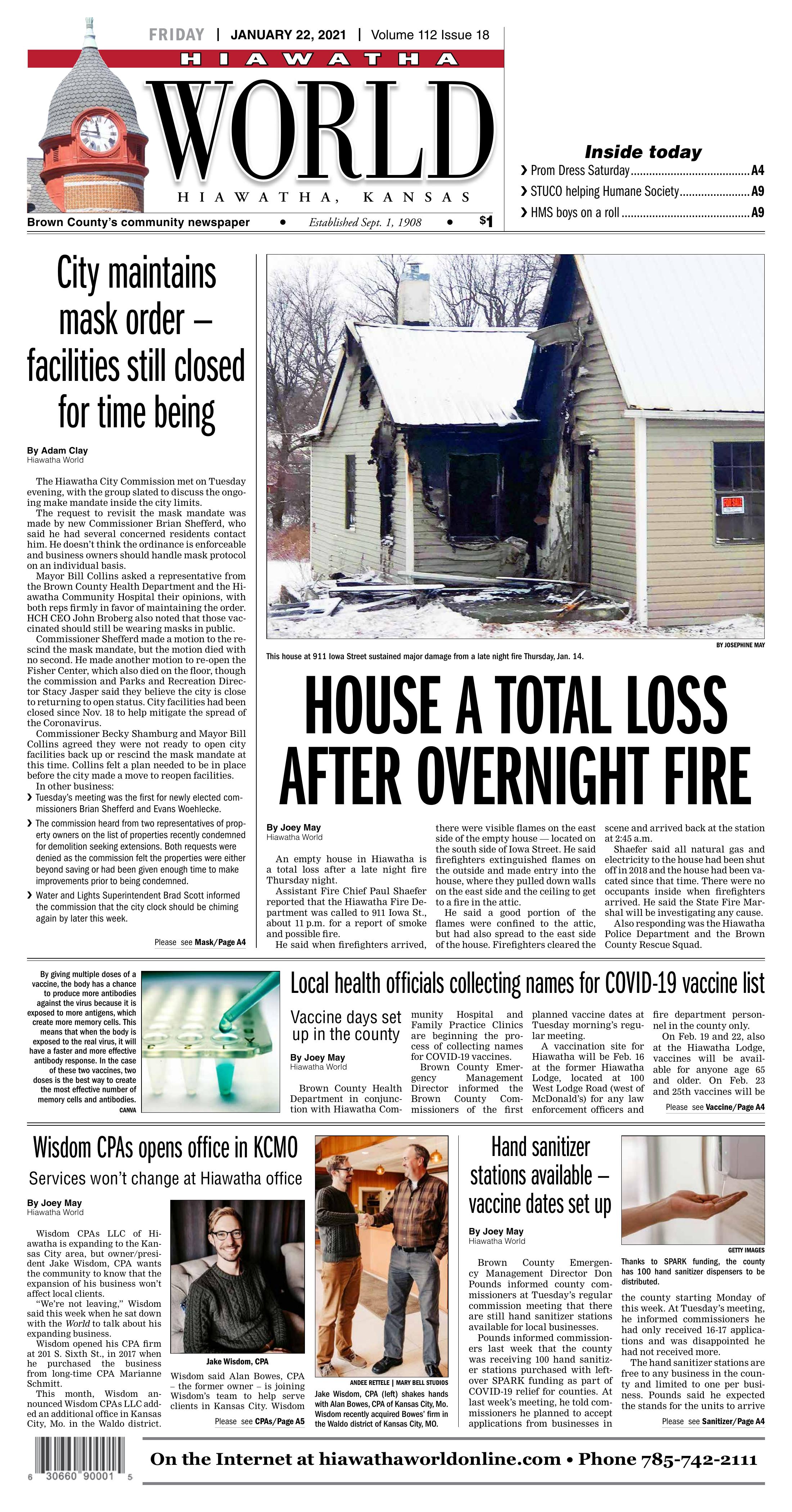 An empty house in Hiawatha is a total loss after a late night fire Thursday night.

Assistant Fire Chief Paul Shaefer reported that the Hiawatha Fire Department was called to 911 Iowa St., about 11 p.m. for a report of smoke and possible fire.

He said a good portion of the flames were confined to the attic, but had also spread to the east side of the house. Firefighters cleared the scene and arrived back at the station at 2:45 a.m.

Shaefer said all natural gas and electricity to the house had been shut off in 2018 and the house had been vacated since that time. There were no occupants inside when firefighters arrived. He said the State Fire Marshal will be investigating any cause.

Also responding was the Hiawatha Police Department and the Brown County Rescue Squad.

A vaccination site for Hiawatha will be Feb. 16 at the former Hiawatha Lodge, located at 100 West Lodge Road (west of McDonald’s) for any law enforcement officers and fire department personnel in the county only.

You can express your interest in obtaining the COVID-19 vaccine in one of three ways:

Ways to express interest in obtaining the vaccine:

Brown County Health Department & HCH will compile all names submitted to create a Phase 2 Vaccination List. Criteria based on the KDHE Phase 2 vaccine distribution plan will be used in prioritizing individuals that are interested. Individuals will be contacted for scheduling when we have vaccines and when its their turn to be vaccinated based on the criteria.

Information will be collected from Monday, Jan. 18 through Sunday, Jan. 31, 2021. Vaccines are free. There may be a nominal fee for administration.

The Hiawatha City Commission met on Tuesday evening, with the group slated to discuss the ongoing make mandate inside the city limits.

The request to revisit the mask mandate was made by new Commissioner Brian Shefferd, who said he had several concerned residents contact him. He doesn’t think the ordinance is enforceable and business owners should handle mask protocol on an individual basis.

Mayor Bill Collins asked a representative from the Brown County Health Department and the Hiawatha Community Hospital their opinions, with both reps firmly in favor of maintaining the order. HCH CEO John Broberg also noted that those vaccinated should still be wearing masks in public.

Commissioner Shefferd made a motion to the rescind the mask mandate, but the motion died with no second. He made another motion to re-open the Fisher Center, which also died on the floor, though the commission and Parks and Recreation Director Stacy Jasper said they believe the city is close to returning to open status. City facilities had been closed since Nov. 18 to help mitigate the spread of the Coronavirus.

Commissioner Becky Shamburg and Mayor Bill Collins agreed they were not ready to open city facilities back up or rescind the mask mandate at this time. Collins felt a plan needed to be in place before the city made a move to reopen facilities.

The commission heard from two representatives of property owners on the list of properties recently condemned for demolition seeking extensions. Both requests were denied as the commission felt the properties were either beyond saving or had been given enough time to make improvements prior to being condemned.

Water and Lights Superintendent Brad Scott informed the commission that the city clock should be chiming again by later this week.

HP&R Director Jasper shared with the commission what the department has been doing while services have been shut down. Jasper said that the department has lost some business due to uncertainty in the Fisher Center’s availability, and that parks have seen an upswing in vandalism in recent months.

The commission voted to allow Jasper to advertise for seasonal help for the summer, as well as to solicit bids for the city fireworks display.

Wisdom CPAs LLC of Hiawatha is expanding to the Kansas City area, but owner/president Jake Wisdom, CPA wants the community to know that the expansion of his business won’t affect local clients.

“We’re not leaving,” Wisdom said this week when he sat down with the World to talk about his expanding business.

Wisdom opened his CPA firm at 201 S. Sixth St., in 2017 when he purchased the business from long-time CPA Marianne Schmitt.

This month, Wisdom announced Wisdom CPAs LLC added an additional office in Kansas City, Mo. in the Waldo district. Wisdom said Alan Bowes, CPA – the former owner – is joining Wisdom’s team to help serve clients in Kansas City. Wisdom plans to work at the Waldo site on Wednesdays and Thursdays, but will keep Hiawatha as his personal residence and work at the Hiawatha office Mondays, Tuesdays and Fridays.

Wisdom said he feels confident the transition will be smooth, thanks to the great staff at the Hiawatha office, some of whom will take care of business from the Waldo office remotely. He said he is excited for the new challenge, but wants the Hiawatha community to know he isn’t going anywhere and services that his clients have come to count on at Wisdom CPAs won’t change.

Wisdom, age 29, is a Hiawatha native and graduate of Hiawatha High School has nearly 11 years of accounting experience. He attended college and obtained an accounting degree before starting his career by working for accountants in Northeast Kansas, including Kramer & Associates LLC of Leavenworth prior to opening Wisdom CPAs at the corner of Sixth and Utah streets, in what once served as the former Hiawatha Savings and Loan building until the 1990s.

Wisdom said since opening the firm almost 3 ½ years ago, they have seen a growth of 130 percent. He has added staff and services as well to meet the growing demands of an increasing client base and the expansion to a Kansas City-area office just made sense as he already had clients in that area.

Wisdom said his family already spent quite a bit of time in the Kansas City area, where he has some family and friends living nearby. He said the Waldo district – located south of the Plaza area by a couple of miles – has a small town vibe, with many Mom and Pop shops, along with other small businesses for professional services.

Bowe and Wisdom will man the office there and he looks to add additional staff as the business grows.

Wisdom CPAs’ biggest growth has been seen in outsource services, along with payroll and accounting. Wisdom CPAs outsource services include financial dashboard and industry benchmarking. The dashboard provides a visual representation of the health of a business, whereas the industry benchmarking compares a business to others within the same industry to help make recommendations. Other services include auditing and of course tax preparation among others.

Wisdom said he is very appreciate to the Hiawatha community for its support over the years and that he could not have gotten where he is today without it. The last thing he wanted to do was leave the area where he and his husband, Matt, and children Randee and Kiara have made a home.

Wisdom has been very driven toward success in his career since a young age and said he “fell down and scraped his knees” many times along the way, but somehow dusted himself off and kept going.

He credits several people with helping him with his success and continuing to stay focused on his goals, including Marlys Roberts – co-owner at the Country Cabin, where he worked as a teenager. He also said his time working for Maxine Simmer was very positive and educational and she still offers a strong support for Wisdom’s success.

“At one time I felt I could not be successful in Hiawatha,” he said, noting that he shared that story with a group of graduates one year recently as a special speaker during commencement. “I thought I had to leave to be successful.”

He and Matt lived in Des Moines for a time, but weren’t happy and craved coming back to the small town where he grew up. They moved back to start their family and have never looked back.

“I am so appreciative of everyone here in Hiawatha who has helped this business become what it is today,” he said. “I want everyone to know that I’m not going anywhere.”

Thanks to SPARK funding, the county has 100 hand sanitizer dispensers to be distributed.

The hand sanitizer stations are free to any business in the county and limited to one per business. Pounds said he expected the stands for the units to arrive by next Monday and planned to get them distributed next week. He will accept applications until they are all gone.

Commissioner Richard Lehmkuhl told Pounds he would provide him information to distribute to local churches through the Ministerial Alliance.

Pounds also informed the commissioners that the Health Department was planning to set up vaccine sites starting in February, based on availability of the Moderna COVID-19 vaccine from the state.

A vaccination site for Hiawatha will be Feb. 16 at the former Hiawatha Lodge, located at 100 West Lodge Road (west of McDonald’s) for any law enforcement officers and fire department personnel in the county only.

Pounds told the commissioners that a lot of people are hesitant about getting the vaccine, which is implemented in two separate shots — 21 days apart.

“The numbers are low in the county of who wants the vaccine versus those who don’t,” Pounds said. “I am seeing that across the board.”

He said vaccines are limited at this time and local Health Departments are implementing them in the phases set out by the Kansas Department of Health and Environment. He said it more vaccines become available then they will add additional dates for vaccines.

Also at Tuesday’s meeting, local residents Richard and Cindy Schilling talked about mask mandates with the commissioners. The Schillings said they are part of the group the Brown County Liberty Alliance, which now has 80 members, who protest not only the enforcement of masks but the role of government in private lives.

Richard Schilling thanked the commissioners for their dedicated service and said he knows that people will be approaching the commission to reinstall the mask mandate, which the commission vote to rescind Dec. 28 after it had been in effect since Nov. 16 countywide. A City of Hiawatha mask mandate was also installed in November and has remained in effect indefinitely, however was expected to be re-evaluated at the Jan. 19 regular meeting.

Schilling told the commissioners he felt that COVID-19 was something residents would just have to learn to live with, and mentioned that he found some studies that show masks don’t make that much of a difference.

“People could argue all day long about whether they work or not,” he said.

Schilling said, that as a group, the Brown County Liberty Alliance feels mask usage should be a personal choice and the responsibility of the citizens — not government responsibility to enforce.

There was discussion concerning the bid from Hamm’s. Brown County Attorney Kevin Hill advised the commissioners he had a phone call set up with the company so wanted to table any decisions until following that.

Pounds advised they were close to updating the county flood plain maps.

Commissioner Lehmkuhl would like to advertise one more time for the Road and Bridge secretary position. The commission will review the applications again next Monday and set up interviews at that time.