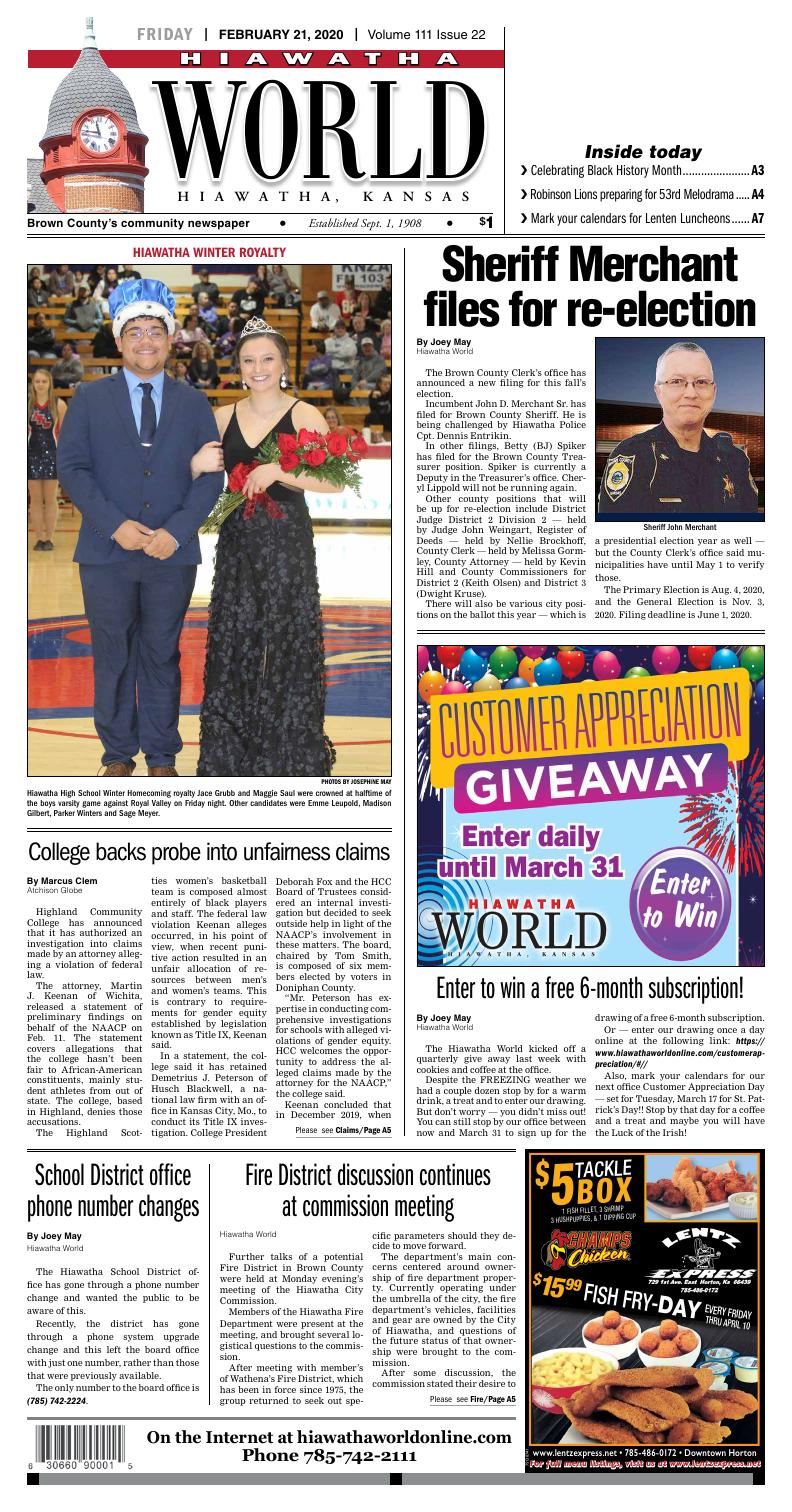 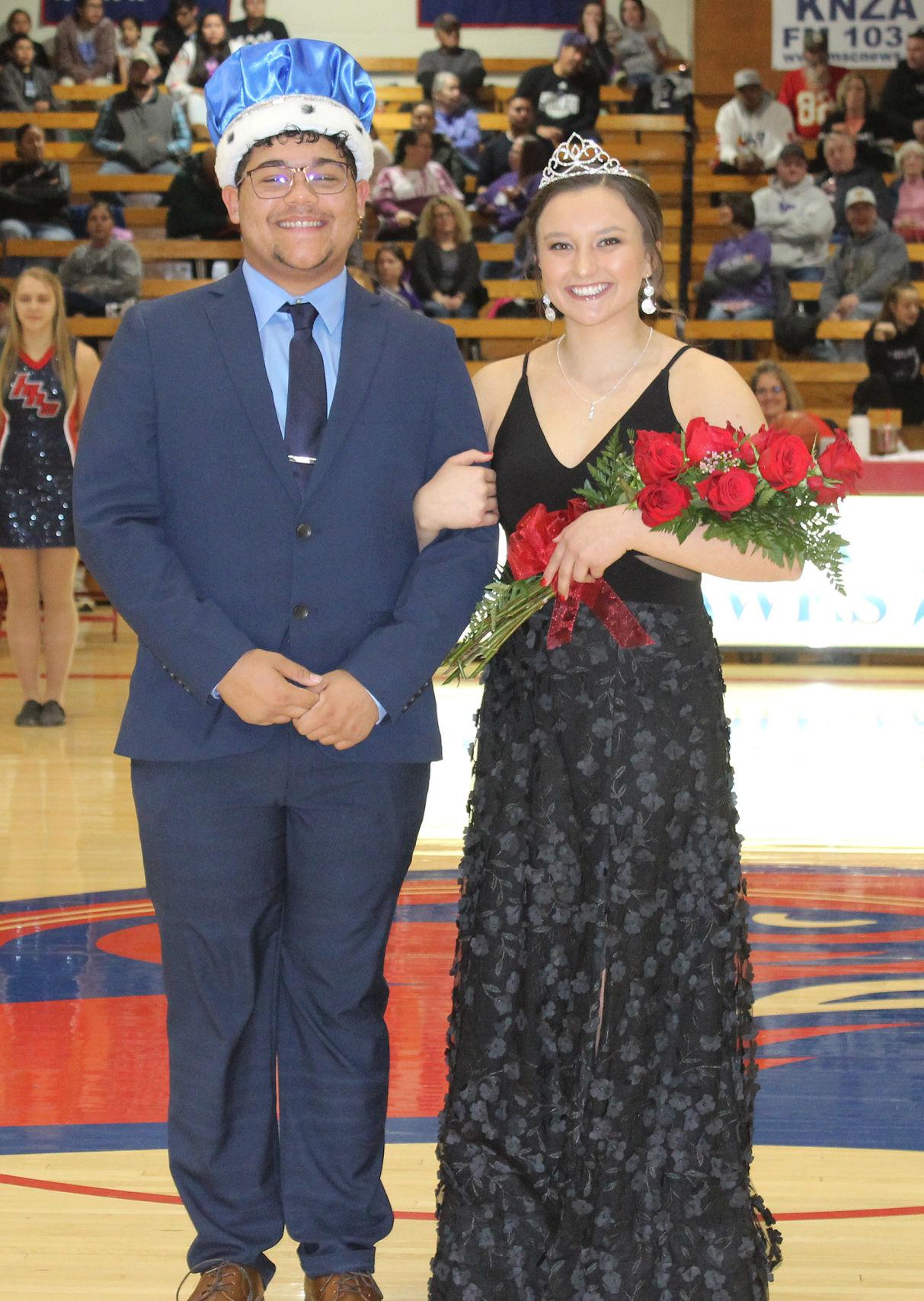 Highland Community College, one of the oldest institutions of higher education in the Midwest, located in Highland, Kansas.

Highland Community College has announced that it has authorized an investigation into claims made by an attorney alleging a violation of federal law.

The attorney, Martin J. Keenan of Wichita, released a statement of preliminary findings on behalf of the NAACP on Feb. 11. The statement covers allegations that the college hasn’t been fair to African-American constituents, mainly student athletes from out of state. The college, based in Highland, denies those accusations.

The Highland Scotties women’s basketball team is composed almost entirely of black players and staff. The federal law violation Keenan alleges occurred, in his point of view, when recent punitive action resulted in an unfair allocation of resources between men’s and women’s teams. This is contrary to requirements for gender equity established by legislation known as Title IX, Keenan said.

In a statement, the college said it has retained Demetrius J. Peterson of Husch Blackwell, a national law firm with an office in Kansas City, Mo., to conduct its Title IX investigation. College President Deborah Fox and the HCC Board of Trustees considered an internal investigation but decided to seek outside help in light of the NAACP’s involvement in these matters. The board, chaired by Tom Smith, is composed of six members elected by voters in Doniphan County.

“Mr. Peterson has expertise in conducting comprehensive investigations for schools with alleged violations of gender equity. HCC welcomes the opportunity to address the alleged claims made by the attorney for the NAACP,” the college said.

Keenan concluded that in December 2019, when the college suspended women’s basketball Head Coach William “BJ” Smith and his two assistants, Jered Ross and Brad Zinn, it had questionable reasons for doing so. Smith is a white man of Native American ancestry, and Ross and Zinn are black. College officials have never explained those reasons in public and said in a recent statement that such commentary, pending an investigation, would be inappropriate.

HCC has since restored Smith to his normal duties, without the support of assistant coaches. Ross has told Atchison Globe that the reasons for his suspension, the length it will go on and the circumstances under which he might be restored have never been explained to him. Zinn has given up on being restored and moved to Georgia.

“In our opinion, it is a violation of Title IX to let the men’s team have a head coach and two or more assistants, while the women’s team has only the head coach,” Keenan said.

The Kansas NAACP, with support from its national affiliate in Baltimore, continues to investigate the allegations of racial and related unfairness at Highland Community College, which Ross and former Scotties football player Loren Young have spoken about in recent weeks.

A voicemail requesting comment from attorney Peterson of Husch Blackwell is awaiting a reply.

If a Hiawatha Fire District is formed, the city commission has indicated it would give the current firehouse to the district.

Further talks of a potential Fire District in Brown County were held at Monday evening’s meeting of the Hiawatha City Commission.

Members of the Hiawatha Fire Department were present at the meeting, and brought several logistical questions to the commission.

After meeting with member’s of Wathena’s Fire District, which has been in force since 1975, the group returned to seek out specific parameters should they decide to move forward.

The department’s main concerns centered around ownership of fire department property. Currently operating under the umbrella of the city, the fire department’s vehicles, facilities and gear are owned by the City of Hiawatha, and questions of the future status of that ownership were brought to the commission.

After some discussion, the commission stated their desire to sign over the department’s equipment and most of the fire trucks. There was more discussion about one truck that is not completely paid for, as well as the facilities.

With approximately $91,000 left on the truck’s loan, the likeliest solution seemed to be a lease agreement with the potential Fire District, with lease payments equal to the loan payments, and ownership set to transfer at the completion of the loan.

As for the building itself, there were varying opinions on whether the property should be written as a low-cost lease or signed over, but after much discussion, it seemed that due to no interest in maintaining the facility, ownership would likely be given to the new Fire District.

The Hiawatha School District office has gone through a phone number change and wanted the public to be aware of this.

Recently, the district has gone through a phone system upgrade change and this left the board office with just one number, rather than those that were previously available.

The Brown County Clerk’s office has announced a new filing for this fall’s election.

In other filings, Betty (BJ) Spiker has filed for the Brown County Treasurer position. Spiker is currently a Deputy in the Treasurer’s office. Cheryl Lippold will not be running again.

Other county positions that will be up for re-election include District Judge District 2 Division 2 — held by Judge John Weingart, Register of Deeds — held by Nellie Brockhoff, County Clerk — held by Melissa Gormley, County Attorney — held by Kevin Hill and County Commissioners for District 2 (Keith Olsen) and District 3 (Dwight Kruse).

There will also be various city positions on the ballot this year — which is a presidential election year as well — but the County Clerk’s office said municipalities have until May 1 to verify those.

The Hiawatha World kicked off a quarterly give away last week with cookies and coffee at the office.

Despite the FREEZING weather we had a couple dozen stop by for a warm drink, a treat and to enter our drawing. But don’t worry — you didn’t miss out! You can still stop by our office between now and March 31 to sign up for the drawing of a free 6-month subscription.

Or — enter our drawing once a day online at the following link: https://www.hiawathaworldonline.com/customerappreciation/#//

Also, mark your calendars for our next office Customer Appreciation Day — set for Tuesday, March 17 for St. Patrick’s Day!! Stop by that day for a coffee and a treat and maybe you will have the Luck of the Irish!