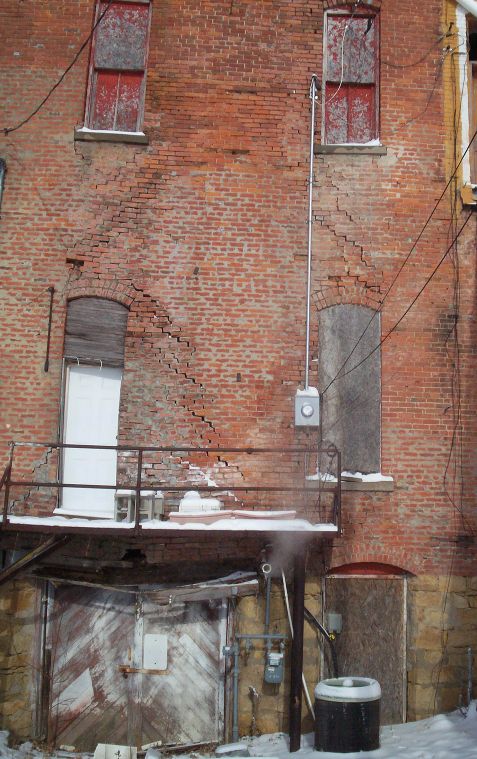 The back of Knudson Jewelry in Horton is the subject of controversy in this small community. City officials say it is a code violation and a potential hazard, while owner Kenneth Knudson is disgruntled at being sentenced to 24 hours in county lock-up for contempt of court in not providing a plan to the city for fixing it up. 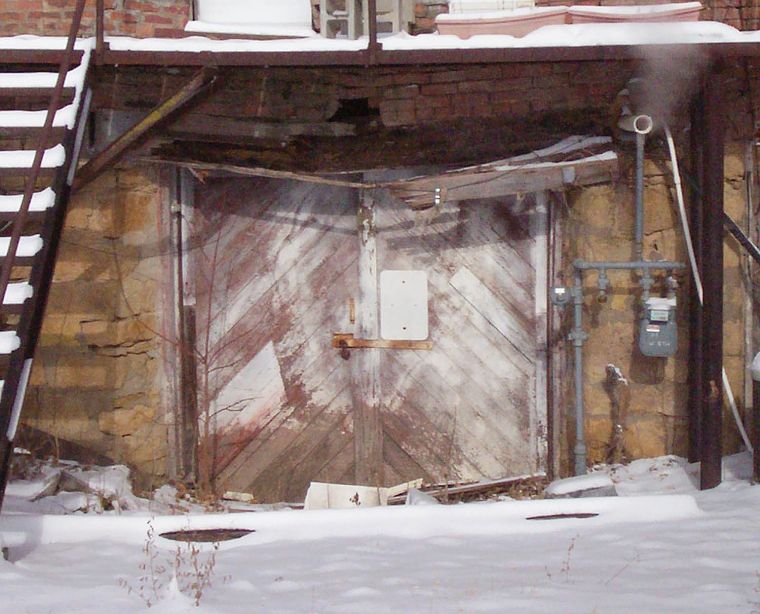 City authorities cite potential hazards and code violations specifically in the large crack on the back side of the building, along with the crumbling bricks over this door.

The back of Knudson Jewelry in Horton is the subject of controversy in this small community. City officials say it is a code violation and a potential hazard, while owner Kenneth Knudson is disgruntled at being sentenced to 24 hours in county lock-up for contempt of court in not providing a plan to the city for fixing it up.

City authorities cite potential hazards and code violations specifically in the large crack on the back side of the building, along with the crumbling bricks over this door.

A night in the Brown County Jail could have been a blessing in disguise for an 88-year-old Horton man who has been cited for a code violation for the condition of his building downtown.

Kenneth Knudson, owner of Knudson Jewelry at 107 W. Eighth St., was ordered to spend one night in jail after being charged with contempt of court in Horton Municipal Court. But since, people are coming out of the woodwork to offer him help.

Police Chief John Calhoon said Knudson had been ordered to provide a plan of action to the court that would describe his intent to fix the back portion of his building, which has loose bricks and a large crack. Knudson said that he did not have the money to fix up the back of his building, which had been deemed a hazard since late last spring when City Code Enforcement Officer Jimmy Stuart began first working with the business owner for the code infraction.

Calhoon said that Knudson appeared in court on Monday, Dec. 23 and was declared in contempt of court because he did not have his plan ready to present after it was requested by Municipal Court Judge Michael Riley during several court appearances. When asked about the case, Judge Riley said he could not comment, but indicated court records were open to the public.

According to city court documents, on May 28, Knudson was issued a summons to appear at the June 10 city court. The case was continued several times and notations in the court documents stated “a fine would be forgiven” if the building was fixed. On Oct. 28, the court notations specified that Knudson was ordered to have the building in compliance, or made progress by Nov. 25. If not, he could be held in contempt. He was ordered to appear in court every two weeks until he came into compliance.

Calhoon, who took over as Horton Police Chief in September, said Knudson has appeared at every Municipal Court date since he took over.

“It was my understanding that he was asked for at least a plan of action to present to the judge, but he failed to do that,” Calhoon said. “There are crumbling bricks and a large crack, that could pose a hazard. People complain of eyesores and dilapidated buildings, which can be hazards or bring down the value of property. But if we ignore the laws, then that creates a liability.”

Calhoon said the judge ordered Knudson to report to Brown County Jail at 9 a.m. on Dec. 26 as a result of the contempt of court charge.

“It was my understanding he was there for 24 hours and bonded out,” Calhoon said.

Calhoon said that an elderly woman from Horton was also ordered to report to Brown County Jail Dec. 26 on a similar charge, due to a code infraction for her property.

Knudson confirmed that he was in jail overnight and bonded out the next day on his own recognizance, without having to pay bail.

“I felt like that was pretty severe punishment,” said Knudson, who said he had been a member of Horton’s business community for several years and past president of the Chamber of Commerce. “I grew up in this area. I am a World War II veteran and I didn’t really expect to be treated this way.”

Calhoon said he felt the situation was an unfortunate one for Knudson and the other elderly person who had to spend the night in county lock-up, but said the law does not exempt anyone from compliance, despite age, whether they are a veteran, or whether they have the money.

“I have a heart and in a small town we want to work with people,” Calhoon said. “But, how long do you do it? I really didn’t like it that an elderly person had to spend the night in jail, but we have to enforce the laws.”

Calhoon said it was his understanding that since word of Knudson’s situation has gotten around that some contractors have offered work at little or no charge to help him fix up the building downtown.

Knudson’s story was first published by Fox 4 News on Dec. 30 and it went viral nationwide on Facebook.

Knudson said his phone has been ringing off the hook and he has received calls from as far away as Maryland and California. And through all of the publicity, the blessing of this entire situation is that people have stepped up to offer help.

“We’ve had quite a few people to offer to help, but we haven’t decided on any one person,” Knudson said, noting he is going to come up with a plan of action to submit to the city.

He is still disgruntled at his punishment, stating he didn’t feel the city codes were designed to “put people in jail.”

“I don’t feel like I committed a crime,” he said. “I can understand the city being concerned about vacant houses and other places in need of repair. But the crime didn’t fit the punishment in this case.”

Calhoon said Knudson is required to appear in Horton Municipal Court at 4 p.m. on Monday, Jan. 13 to present his plan of action.

‘This Is Us’: All About Rebecca’s Memory in the First Season 6 Trailer (VIDEO)

Mr. Knudson, I've set up a fundraiser for you and hopefully we can help you with your situation. Here is the page: http://www.youcaring.com/other/help-wwii-veteran-restore-his-building-and-pay-city-fine-/122835.

If anyone would like to donate please visit the above site and you can make a donation.

So, Mr. Knudson had ALL year to make arrangements with a local contractor, setting up a payment plan, even cashing out some of his on-hand jewelry stock to get the ball rolling, and STILL didn't present the court with as much as a contractor's estimate? Yet, the first thing he says when he's put in jail is "I'm a WWII vet - I'm being mistreated". No, I don't think someone of his age and experience should be in jail. For some people, the entire idea that they have to go to jail could set off a whole myriad of events, including a heart attack. However, I think the man was expecting to be given a pass because of his community service, his military service and his age. Did he even once mention the woman who was jailed at the same time? Or is it only he who should be treated with kid gloves? I have all the respect in the world for those who put themselves in harm's way during the 2nd great war. Especially those who are still with us and productive as Mr. Knudson obviously is. But, that does not give him carte blanche to not even attempt to make arrangements to keep his building from tumbling down and killing someone. The nation saw what can happen with the Salvation Army store in Philadelphia just last year.

So, Sandy in cali - will some of your money be helping the elderly woman as well who was jailed for the same thing? Or do only veterans who make themselves known qualify?

Do I sound bitter? Maybe. And, I apologize because I'm really not normally like this. But, after having read the entire story, I fail to see how Mr. Knudson could have gone all year without making any effort to at least make a plan of action. If any of the rest of us did that, a lien would be put on our property and/or wages.

You must be having a bad day, chatombreux. Why take it out on Mr. Knudson? You actually think his building is going to fall down and kill someone?

Judge Riley needs to lighten up (he is coming off like Judge Smails from Caddyshack). I understand that the Courts have to deal with contempt, but this seems more like an old guy who does not have the money to make repairs. Are we back to work houses and debtor prisons for 88 year old WWII veterans? This is just wrong.

I hope people in the community can step up and help Mr. Knudson.