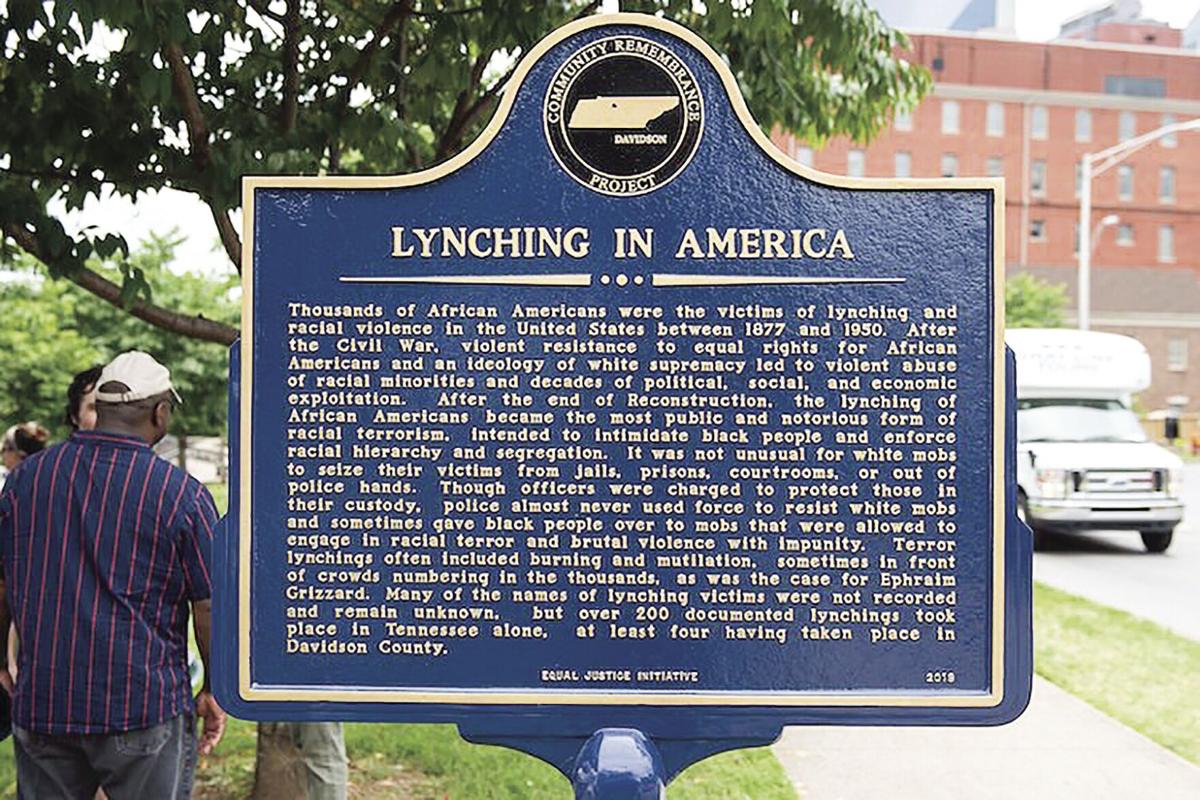 A historical plaque tells of social injustice with a focus about lynching in the United States. 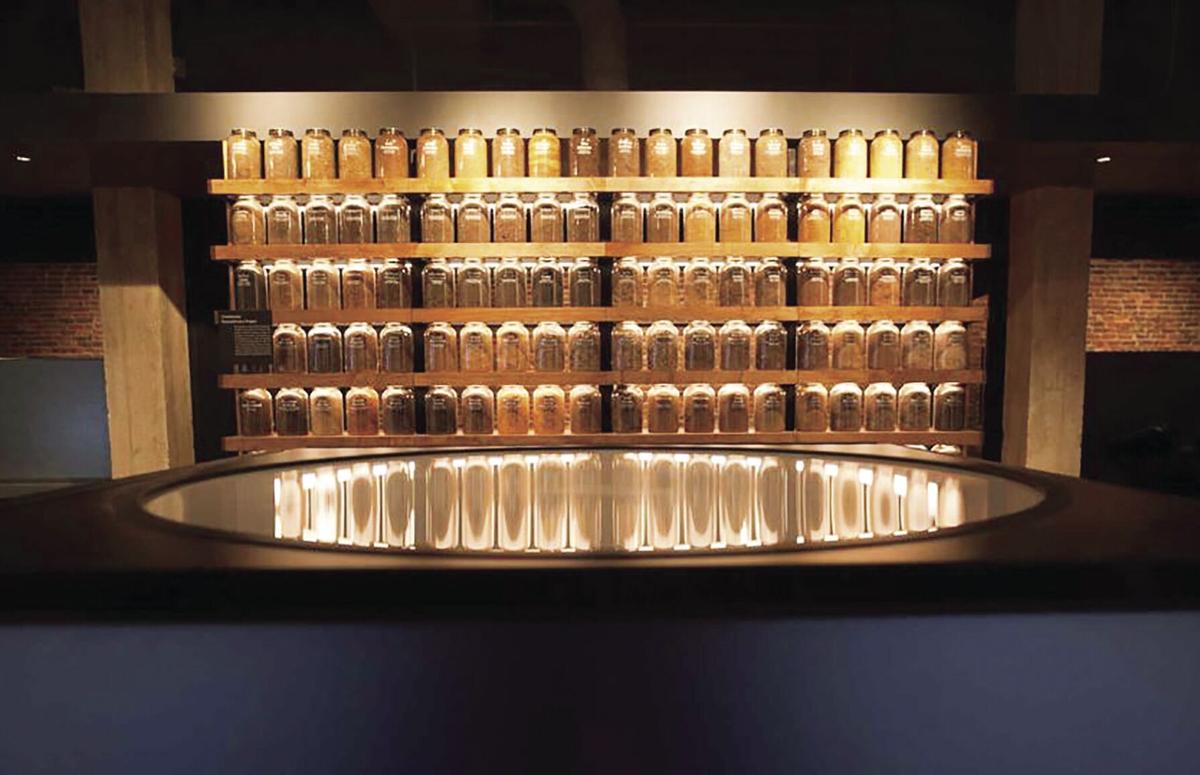 Soil samples on display as part of the Legacy Museum in the Equal Justice Initiative Museum located in Montgomery, Alabama.

A historical plaque tells of social injustice with a focus about lynching in the United States.

Soil samples on display as part of the Legacy Museum in the Equal Justice Initiative Museum located in Montgomery, Alabama.

Local organizations have partnered with the Equal Justice Initiative to recognize a history of racial violence in Atchison, focusing on an 1870 lynching.

On January 4, 1870, an African American man by the name of George Johnson was lynched by a mob of at least 50 white men in Atchison, Kan.

Johnson had injured a white man by the name of Patrick Cox in a hunting accident five days earlier. Although initial reports were that Mr. Cox was killed, he was in fact only moderately wounded and made a full recovery. Johnson surrendered himself to local authorities and was held in the jail at 6th & Santa Fe in Atchison.

The county attorney indicated that criminal charges against Johnson were unlikely. On Jan. 4, it was rumored throughout town that a lynch mob was coming for Johnson that night, but no preventative measures were taken to protect him. At 11:30 p.m., the mob broke into the jail, frightened off the lone deputy on duty, and fired three shots at Johnson. The fleeing deputy rang the town fire bell and hundreds of people quickly gathered at the jail. Nobody intervened as the lynch mob carried Johnson out of the jail, strung a rope around his neck, beat him, and dragged him to the intersection of 4th and Commercial. Johnson was propped up and shot at several more times, but somehow still lived. The mob carried Johnson’s broken body to the 5th Street Viaduct and hanged him. Despite a massive crowd of witnesses, only one man was arrested for the murder of George Johnson, and no one was ever indicted.

In a rare move for an African American woman in the 1870’s, Johnson’s widow filed suit against those responsible for Johnson’s lynching and recovered $20,000 and quickly left town. Following her departure, George Johnson‘s lynching was erased from local history. It was not until his lynching was recently discovered through research by Benedictine history professor, Joshua Wolf, that Johnson’s lynching became known again.

The Equal Justice Initiative (EJI) is a non-profit organization based in Montgomery, Alabama that was founded by renowned death penalty attorney, Bryan Stevenson, who was the subject of the recent movie, “Just Mercy.” Along with its work in successfully overturning death sentences of inmates who were later exonerated, EJI has established the Legacy Museum and National Memorial for Peace and Justice in Montgomery to recognize the history of lynching and racial violence in America.

In their landmark report “Lynching in America, Confronting the Legacy of Racial Terror,” EJI reported that “during the period between the Civil War and World War II, thousands of African Americans were lynched in the United States. Lynchings were violent and public acts of torture that traumatized black people throughout the country and were largely tolerated by state and federal officials. These lynchings were terrorism. ‘Terror lynchings’ peaked between 1880 and 1940 and claimed the lives of African American men, women, and children who were forced to endure the fear, humiliation, and barbarity of this widespread phenomenon unaided. Lynching profoundly impacted race relations in this country and shaped the geographic, political, social, and economic conditions of African Americans in ways that are still evident today. Terror lynchings fueled the mass migration of millions of black people from the South into urban ghettos in the North and West throughout the first half of the twentieth century. Lynching created a fearful environment where racial subordination and segregation was maintained with limited resistance for decades. Most critically, lynching reinforced a legacy of racial inequality that has never been adequately addressed in America.”

In an effort to address this history of racial violence that had been erased from local history, members of Atchison United and the Atchison Art Association were motivated to memorialize George Johnson’s lynching as a means of addressing the racial violence that plagued Atchison and much of America and bring awareness to the fact that Atchison cannot progress as a community unless and until the past is confronted in a historically accurate and meaningful way. Inspired by the Equal Justice Initiative’s Community Remembrance Projects, individuals with Atchison United worked for the past 11 months with the Equal Justice Initiative to formally recognize the lynching of George Johnson.

Following a lengthy application process, a committee of Atchison United members consisting of Dr. Joshua Wolf, Charo Kelley, Sean Crittendon, LaTisha Downing, and Kevin Hill made their formal presentation to the Equal Justice Initiative in March of this year and were recently advised that their application was approved by EJI’s board. This recognition will include a historical marker recognizing the history of lynching in America and specifically recognizing the lynching of George Johnson. With the approval of the application, the cost of the historical marker will be paid 100% by the Equal Justice Initiative. Along with the historical marker, soil from the location of Johnson’s lynching will be taken as part of the remembrance project and will be housed in EJI’s museum in Montgomery, Alabama along with soil taken from the site of lynchings across America.

Atchison United’s President, Sean Crittendon, said that the committee was overjoyed in receiving word that their application was approved by EJI.

“Their team was very impressed with our application and presentation and mentioned how they hope to visit Atchison in the near future,” he said. “They were especially impressed with Atchison United’s collaboration with the Atchison Art Association, the Atchison Juneteenth Committee, and the City of Atchison and the enthusiasm everyone with those groups had with this project.”

Crittendon said a lot of hours were dedicated to the application and presentation by the committee and others.

“It is nice to see that all of our hard work paid off as EJI will be bearing the cost of a very nice historical marker and Atchison will join the ranks of numerous cities across the country who have shown the courage to address its past history of racial violence and a willingness to make our community more accepting and united,” he said.

As part of the project, the Atchison Art Association commissioned a sculpture from Kansas City artist, Dave Breneman, that will be dedicated along with the historical marker from EJI. Current plans call for a George Johnson memorial walk that will take place as part of Atchison’s Juneteenth celebration at 7 p.m. on Friday, June 11. The memorial walk will trace the same steps that George Johnson was forced to take on his fateful trip starting at the 1870 site of the local jail at 6th and Santa Fe to the 5th Street Viaduct where he was ultimately hanged. Stops will be taken along the path of Johnson’s lynching where readings will be made by local leaders along with a prayer for racial justice. Soil samples will also be taken along the way and will be collected and delivered to the EJI museum in Montgomery where they will become a part of the Legacy Museum.

Following the memorial walk, dedication of the historical marker and a sculpture commissioned by the Atchison Art Association is scheduled to take place at the recently dedicated art square between 4th and 5th and Commercial on at 7 p.m. on June 19. Additional information on the memorial walk, the Atchison Juneteenth Celebration, and the dedication of the historical marker and sculpture will be posted on Atchison United’s and Atchison Juneteenth Celebration’s Facebook pages as more information becomes available. The public is welcome and encouraged to participate in these events.

Remember my name! How your favorite Drag Race queens came up with their famous monikers...