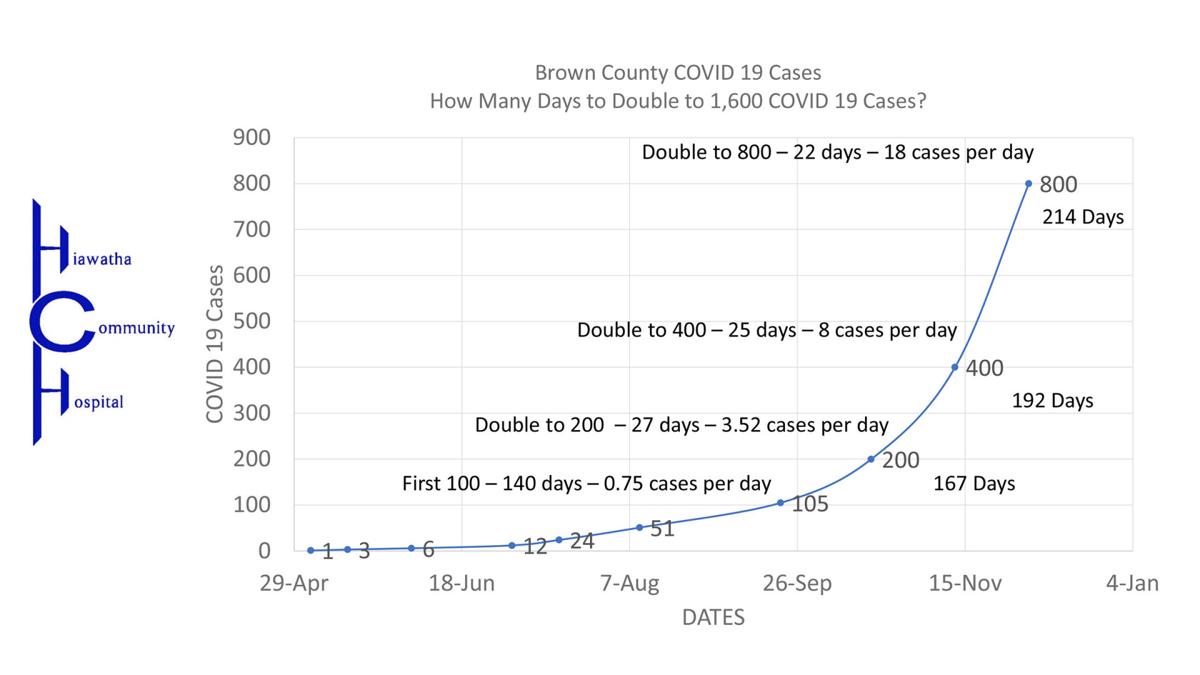 This graph, provided by the Hiawatha Community Hospital, shows how many days it took to get to approximately 800 cases.

This graph, provided by the Hiawatha Community Hospital, shows how many days it took to get to approximately 800 cases.

The Brown County Commission voted Monday morning to extend the current mask mandate until Dec 28 and also voted to add “No Mass Gatherings of 50 or More,” to the resolution.

The vote was 2-1 with Dwight Kruse and Richard Lehmkuhl voting for the extension of the mask mandate that went into effect Nov 16 and Keith Olsen voting no — stating he felt that businesses could impose their own restrictions. Religious organizations/gatherings are exempt from the mass gathering restrictions, but must adhere to the mask mandate.

The vote came after more than an hour of listening to information and recommendations from County Health Officer Robin Downard and Hiawatha Community Hospital CEO John Broberg.

The recommendations from Downard and Broberg was to extend until Jan. 19 to get at least two weeks out from New Year’s for further review at that time and no mass gatherings of 25 or more.

The commissioners voted on Nov. 16 to revoke the previous resolution made in July to opt out of the governor’s mask mandate order. At that time, the county had 18 cases and current numbers show 800 with 11 confirmed deaths.

The resolution voted on Monday morning was an extension of the mask mandate voted in Nov. 16, with the addition of the mass gathering restriction.

Brown County Attorney Kevin Hill said that while Hiawatha had its own mandate in effect, and there had been some questions about enforcement of the mandate, that by issuing one within the county “it’s a message you are taking this seriously.”

Despite the advice from health officers, commissioners did not want to extend the mask mandate until Jan. 19 at this time and preferred to extend for three weeks only to review the county numbers at that time. Commissioner Olsen has made his views clear — that he didn’t feel the county should have any control over whether businesses and schools required masks. Commissioner Richard Lehmkuhl said he had fielded many phone calls from people very angry and calling him names. Commissioner Dwight Kruse said he felt the county was making some headway, but thought an extension would be helpful.

Downard told the commissioners that neighboring counties were still requiring mask mandate and it has been shown on data gathered that those counties who required masks saw a downward trend in positive and active cases.

Downard said as of Monday, there were 85 positive cases with four in the hospital and 11 deaths. Commissioner Kruse asked how the virus was affecting long-term care facilities and Downard reported that Mission Village care facility in Horton had an outbreak that is involving an investigation from the Kansas Department of Health and Environment. She said the majority of residents and staff had tested positive from COVID and that there had been 12 deaths of residents there. She noted that two of those deaths were confirmed as COVID-related, while the other 10 were pending. She said her office — along with KDHE — was investigating the procedures in place at the facility, along with whether they had proper protective gear. She noted there had been a couple other positive cases within other long-term care facilities, but none had so far shown the same outbreak as Mission Village. She said that positive-tested staff was working with positive-tested patients just to keep staffing and that there was a big issue there.

“There have been some very big issues in long-term care facilities,” she said.

Broberg told commissioners that the availability of hospital beds locally and at larger hospitals continued to be an issue — as well as the staff to care for those patients. He warned that if numbers of COVID patients that required hospital care continued to increase then the community could see a loss of other services — such as surgery.

He said currently, the hospital had an average of five COVID patients a day in the hospital. Some of the patients with more advanced and serious symptoms had been transferred to a higher level of care if they had beds available.

He noted that Stormont Vail Hospital in Topeka had turned waiting areas and lobbies into places where patients can be cared for in order to meet the demand of increasing cases. He noted that space wasn’t necessarily the only issue — having healthy staff to care for those patients was another issue.

“Our biggest challenge is staffing for those beds,” he said, nothing that 20 percent of the hospital work force had been affected by COVID directly.

Commissioner Olsen asked whether health officials had investigated utilizing facilities such as the closed Horton Hospital to transfer COVID patients to. County Emergency Director Don Pounds said the state had investigated that hospital facility and found it did not meet the criteria to be open to care for any patients at this time.

Broberg told commissioners that their COVID clinic had seen up to 50 patients a day in peak times, but on average see between 30-40 a day. He said this does take providers away from the hospital clinic, where they would be seeing people with other health issues or well visits.

Broberg also provided a graph for the commissioners to see the trend of cases increasing in the county. The graph showed that it took the county nearly 8 months to get to the first 300 positive cases and that in November alone another 500 cases were added.

Downard updated the commissioners on a drive thru COVID testing clinic that will be set up hopefully within a week at the Horton Armory. This will be funded through CARES Act money — at least through the end of the year and possibly longer if Congress votes to extend some of that funding.

She warned this would increase county numbers and it’s been made apparent to her that many people are choosing not to test and say they are self-quarantining. She said she knows this is familiar pattern with students as well — many are not testing.

Downard said the testing is free of charge will not be the nasal swab — but a saliva test where results should be made available within 1-2 days. Anyone can test — whether showing symptoms or not. She said this method of testing could reach 200-250 people each day and take some of the burden off the hospital and her office.

Broberg said he felt this drive through testing station was a great service — especially as more people would be testing to get out of quarantine now that the CDC had changed quarantine guidelines — which the KDHE had adopted.

Downard also told commissioners that the Health Department was receiving a testing machine that would test for COVID, RSV and Influenza A and B but they could only test up to eight a day, as each test takes an hour. She also said her staff consists of herself and two contract tracers that are funded through the CARES Act through Dec. 31. She said the state is still requiring that disease tracing and so that time has to be spent contacting people who might be exposed or affected by a positive case.

She said that once the CARES Act funding ends Dec. 31, those contract tracers won’t be available to her and it will just be her. Downard said she didn’t know how she would be able to handle all that’s required on her own.

Commissioner Lehmkuhl said he was concerned about how this would affect funerals. He didn’t feel the county had issues with large mass gatherings and was in favor of making the protocol no more than 50 — which is what the final vote was.

Downard also talked about the availability of vaccines — which were projected to be available potentially to frontline workers by the end of the year. She said there is a schedule of the release of vaccines, which hospital workers and elderly will be able to receive it before the general population. If the vaccine is released according to schedule — it could be ready for the general public by spring.

Pounds informed the commissioners that he had 10,000 masks that he would like to give out to the general public and that local law enforcement agencies wanted to be involved in distributing them. The commissioners voted to allow him to distribute the masks however he saw fit.

Which Canceled Show Would You Like to See Saved? (POLL)

Arkansas Gov. on state's covid resurgence: 'This is a pivotal moment'