About 100 people came out for a prayer demonstration ‘Hiawatha Believes Black Lives Matter’ at the Korthanke Fountain by the Hiawatha Police Department Thursday evening. 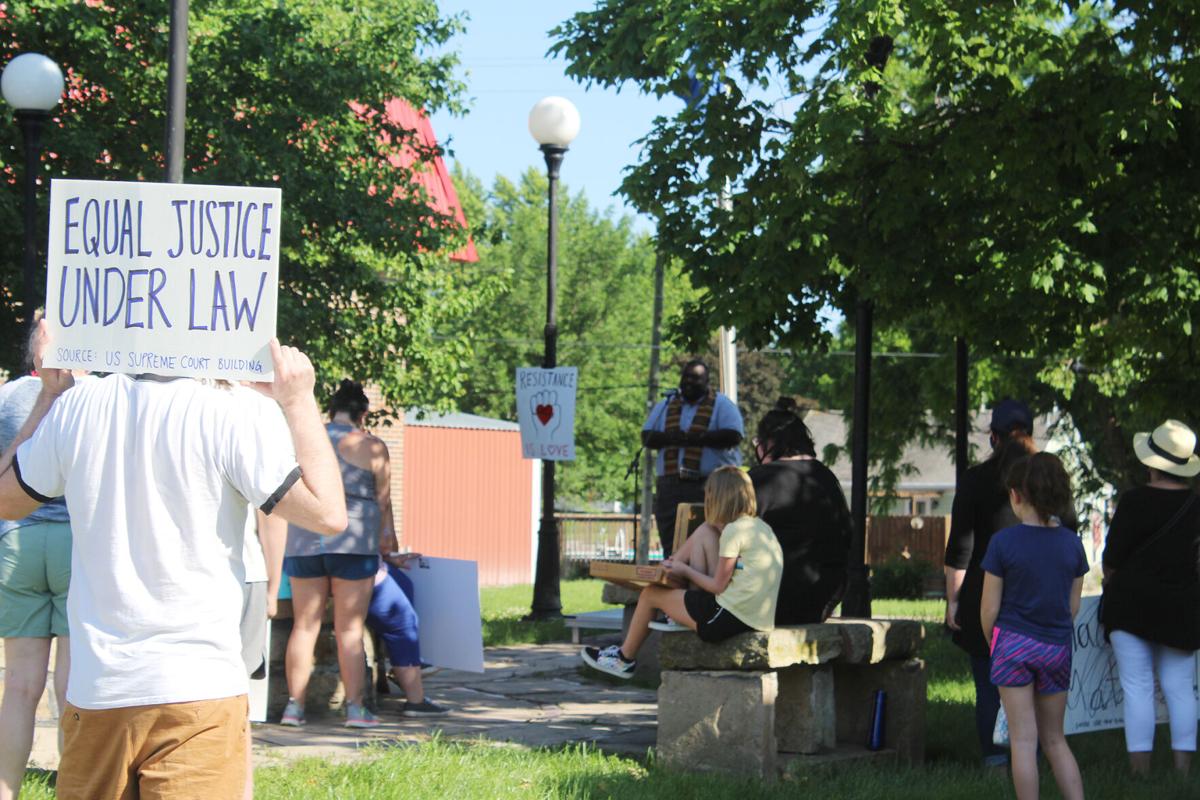 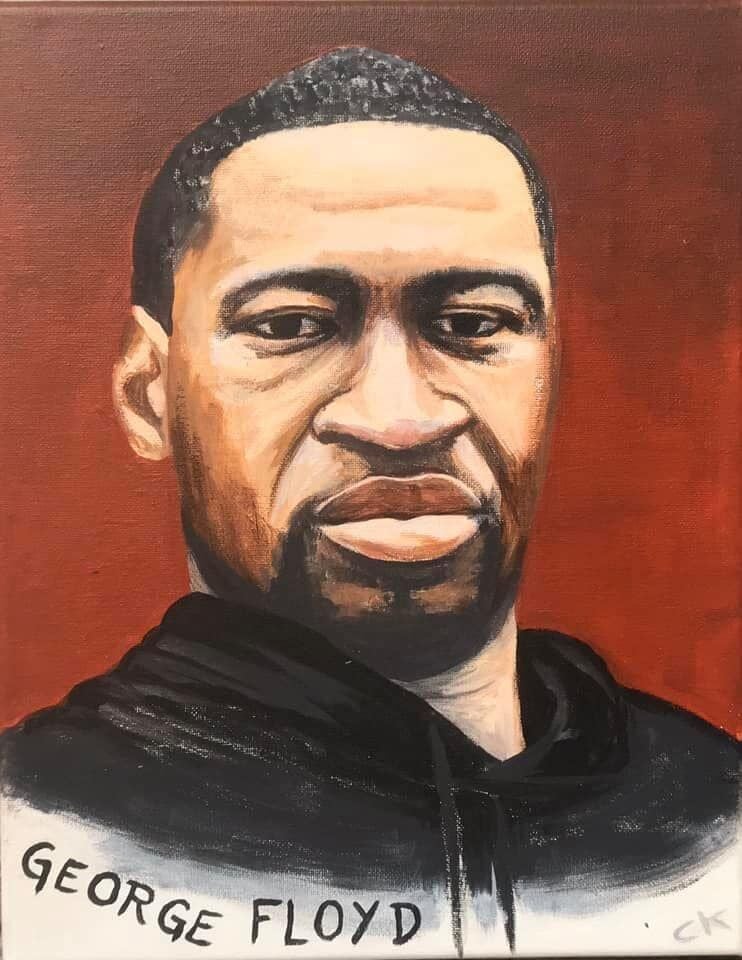 Cindy Kersenbrock Bicker, former art teacher with Hiawatha schools took her emotions over Floyd’s death to canvas earlier this week by creating this portrait. This snapshot of the portrait is printed with Bicker’s permission.

About 100 people came out for a prayer demonstration ‘Hiawatha Believes Black Lives Matter’ at the Korthanke Fountain by the Hiawatha Police Department Thursday evening.

Cindy Kersenbrock Bicker, former art teacher with Hiawatha schools took her emotions over Floyd’s death to canvas earlier this week by creating this portrait. This snapshot of the portrait is printed with Bicker’s permission.

George Floyd was killed in 8 minutes and 46 seconds by a White police officer in Minneapolis on May 25.

His death has rocked the nation, leading to protests, riots, looting, political unrest and more as protesters have gone to the streets to bring awareness to what has been termed as a racially motivated killing of yet another Black person by police.

Although the violent protests have been filling the news, what aren’t being told are the stories of peaceful protests, prayer vigils and movements to bring awareness to Floyd’s death and racism in the United States.

George Floyd, 46, was arrested by police after a local convenience store called in a possible purchase with counterfeit money. According to a New York Times report of the incident, Floyd lay unconscious on the street with Officer Derek Chauvin’s knee pressed on the back of his neck. According to the report and video, Chauvin’s knee did not move from Floyd’s neck for 8 minutes and 46 seconds – the last minute even as paramedics were on the scene and onlookers were crying out for him to stop. Chauvin and three other officers were fired and are facing charges in the case.

In Northeast Kansas, there has been unrest concerning the incident, but also peaceful events. In Topeka, Kansas City, Lawrence and Manhattan, local media have told of protesters becoming agitated and violent, stores closing early and barricading windows and doors against possible looters. In some communities, however, there have been very powerful events in the name of George Floyd as local residents want to remember him and bring awareness in his name, but to do so without violence.

In Hiawatha, peaceful protesters lined the sidewalk in front of the Brown County Courthouse Sunday wearing medical masks and holding signs “Justice for George,” “Black Lives Matter” and “We Can’t Breathe” — the last a reference to what onlookers say were George Floyd’s last words “I can’t breathe.”

Community members were invited to join a prayer vigil “as our nation grapples with our history of systemic racism and its impact on our friends, family, and neighbors. Help us come together to mourn the experiences of BIPOC and pray to offer hope for equality for all,” according to the Facebook event post. Speakers for the event includee a prayer by Pastor Andrew Finch, comments by Brooke Grier, prayer by Shug Cadue and comments by Jason Thomas, both of the Kickapoo Tribe.

Other people have expressed their emotions through other ways. Cindy Kersenbrock Bicker, former art teacher with Hiawatha schools, is now teaching at Gardner Edgerton High School and also is an instructor at Lawrence Arts Center.

Earlier this week, she took her emotions to the canvas. Bicker, who is also a yoga instructor, said she painted a portrait of George Floyd in four hours, noting she did it as her meditation to help her cope with the horrible tragedy of his death.

While police have been the focus of many violent protests, local law enforcement want the community to know they support these local peaceful events and are outraged over the killing of George Floyd.

“I am excited for the prayer demonstration scheduled for tomorrow evening at our fountain. I plan to attend in support of my community,” said Chief John Defore. “I have been a member of this community going on 8 years. My family has made this our home and as such we are proud to be a part of Hiawatha. Hiawatha is a progressive town with family values.”

Chief Defore said, as a police officer, he is saddened by all of the hate in our country.

“As a police department, we do our very best to fight crime in all its forms, but hate crimes of any form are exceptionally bad,” he said. “Nobody likes a bully and all hate crimes are bullies acting out against others, regardless of race, religion, sexual orientation or anything else. I was reminded today by someone that I respect very much, In God’s eyes we are all the same.”

“Our thoughts and prayers go out to George Floyd’s family and everyone affected by the death of Mr. Floyd,” Sheriff Merchant said. “We are saddened by the great division that we have in this country today and pray for healing and forgiveness to take place so we can all begin to rebuild our great nation. I applaud and respect those who are taking the peaceful approach to mourn and bring awareness, violence has no place in a time like this. I can only speak for my agency and the ethical standards that I demand of myself and my staff when I state that when we perform our duty, I insist that we do not use personal feelings, religious beliefs, prejudices, personal friendships or animosities or anything else that would take us away from making sound, fair judgement when we are performing our duties as sworn law enforcement officers and staff.”

Sheriff Merchant said that as sworn law enforcement officers, the badge represents a symbol of faith, faith that officers will impartially and fairly earn the public;s trust while performing our sworn duties, not use it as an excuse to promote violence, hatred or mistrust.

“When I took office, I swore an oath to support the Constitution of the United States and the State of Kansas and this is what I believe in and follow and I expect no less from any other law enforcement agency,” he said. “I ask that we send prayers to everyone involved and try to find a way to keep focused on what is best for our communities and our families.”

Other local communities have also held peaceful events. On Saturday, an organization called Atchison United sponsored a “Justice For George” Unity Walk that brought out 200-300 people.

“This is a new organization that was born during and created after the walk for Amahad Arbery,” Crittendon said. Arbery was a 25-year-old Black man killed in February in a south Georgia community after being chased down by White men, who were arrested just a few weeks ago. “We did not want to just come together as a community over tragedy, we wanted to create an organization where we could have constructive dialogue and create understanding regarding our differences and celebrate our commonalities,” he said. “We have a founding committee that created our mission, purpose, and focus. We now have opened things up to anyone that wants to join us.”

Saturday’s event included speakers, prayer and the singing of “Amazing Grace,” and as one participant noted together they celebrated diversity and commonality.

Also in Atchison, Atchison United youth held a demonstration Wednesday evening downtown at Atchison City Hall. Police Chief Mike Wilson spoke, along with others, and the crowd knelt with more than 8 minutes. There were more than 100 in attendance.

Keilar fires back at Fox News host over Duckworth attack