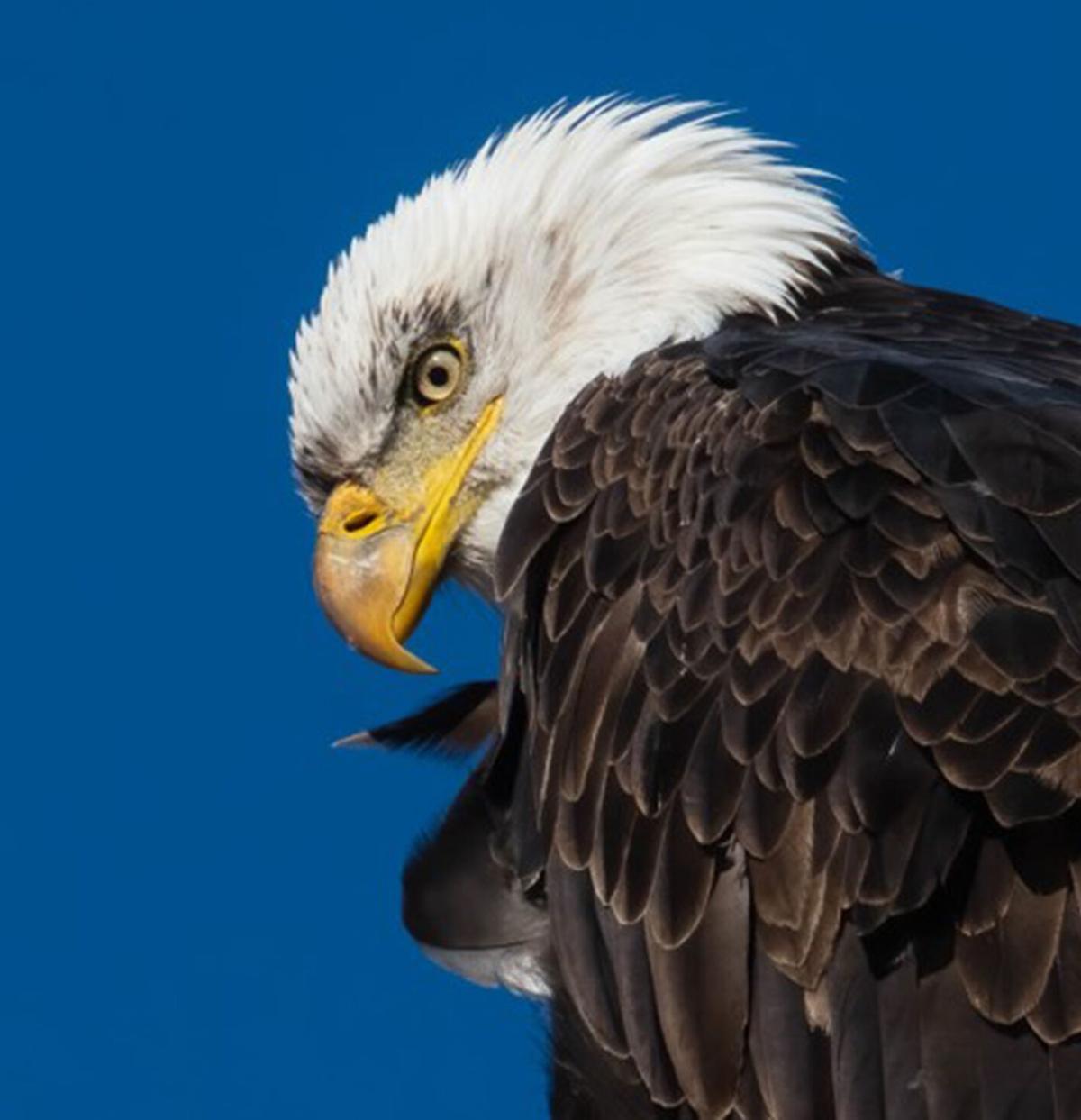 Eagles once soared over all of North America, but the population became sparse in the mid 20th century due to the increased use of insecticides. 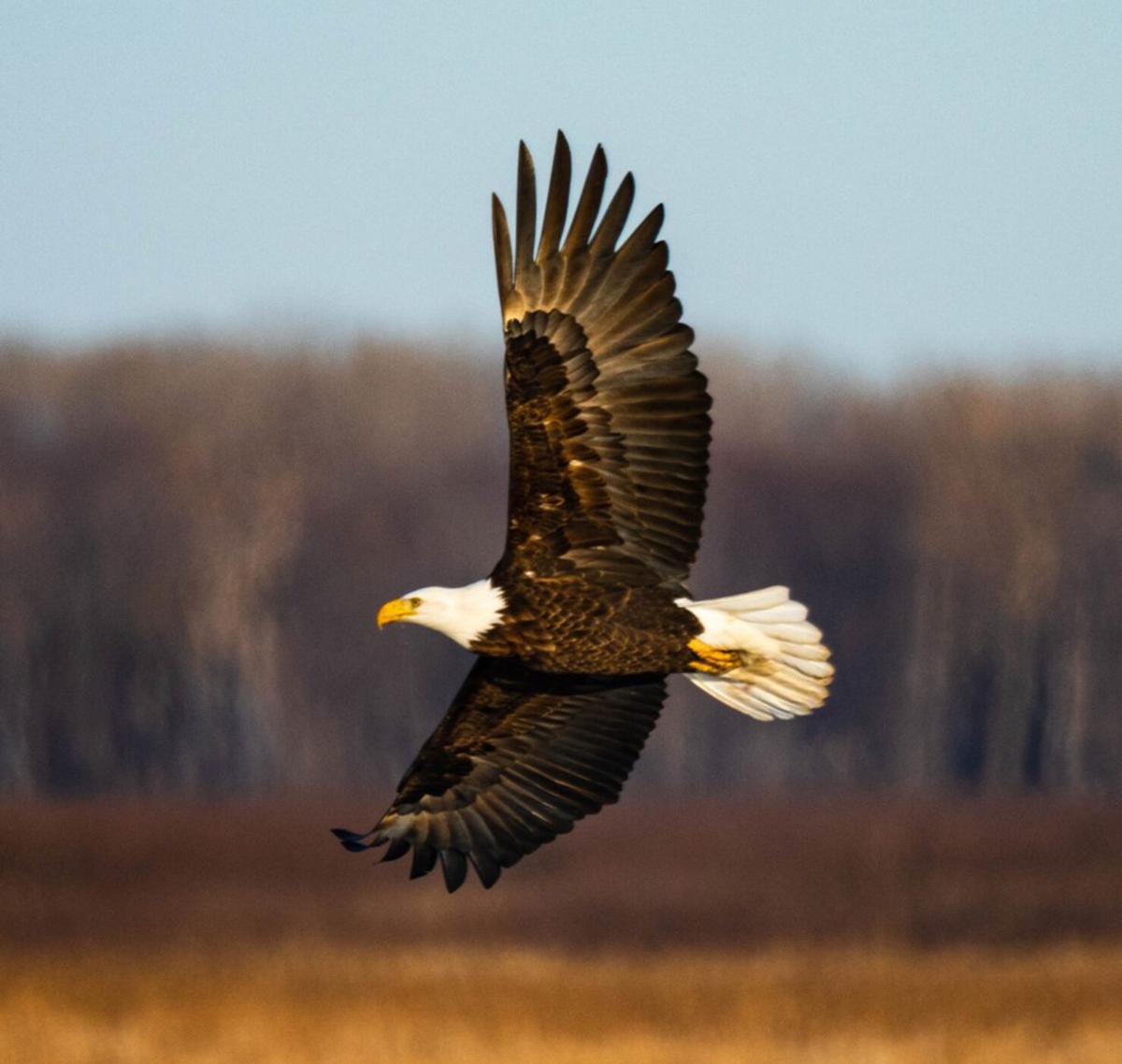 This eagle was captured soaring over the land at Loess Bluff National Refuge near Mound City. 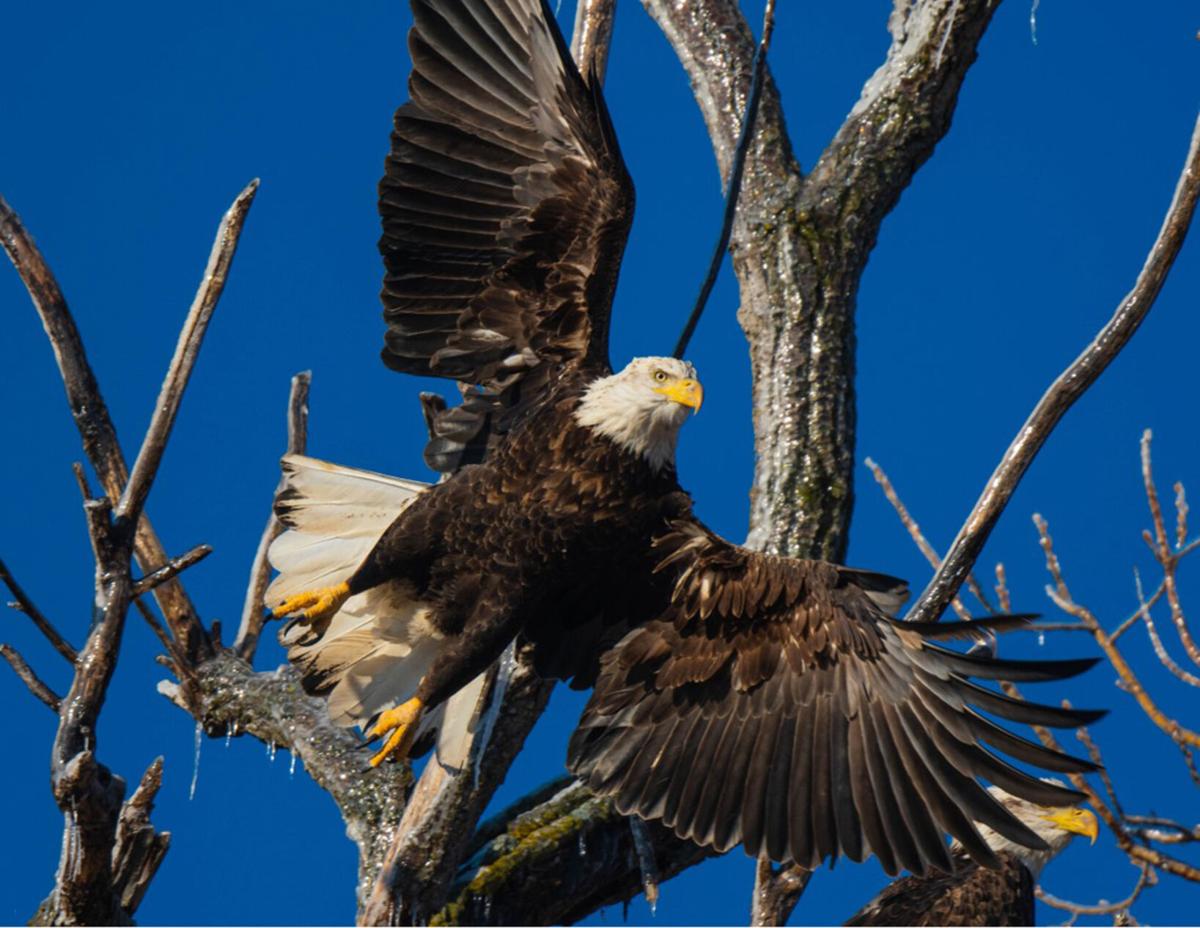 Ron Boggs snapped this photo of two eagles high atop a tree near a nest at Loess Bluffs. The eagle in the foreground had just taken flight, leaving the other eagle to watch over the nest. 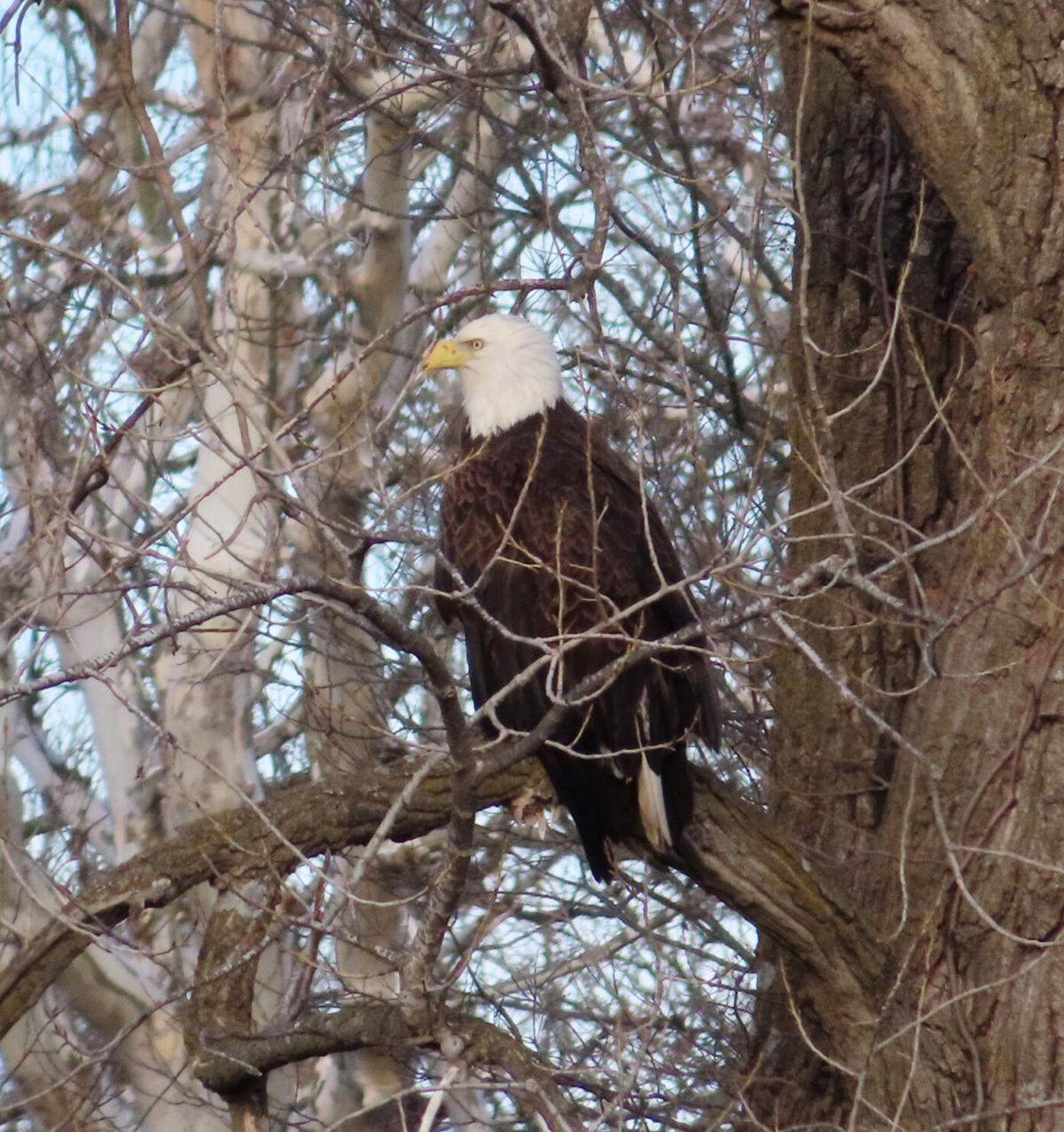 Susan Bryant of rural Robinson snapped a photo of this eagle in a tree not too far from where she lives. 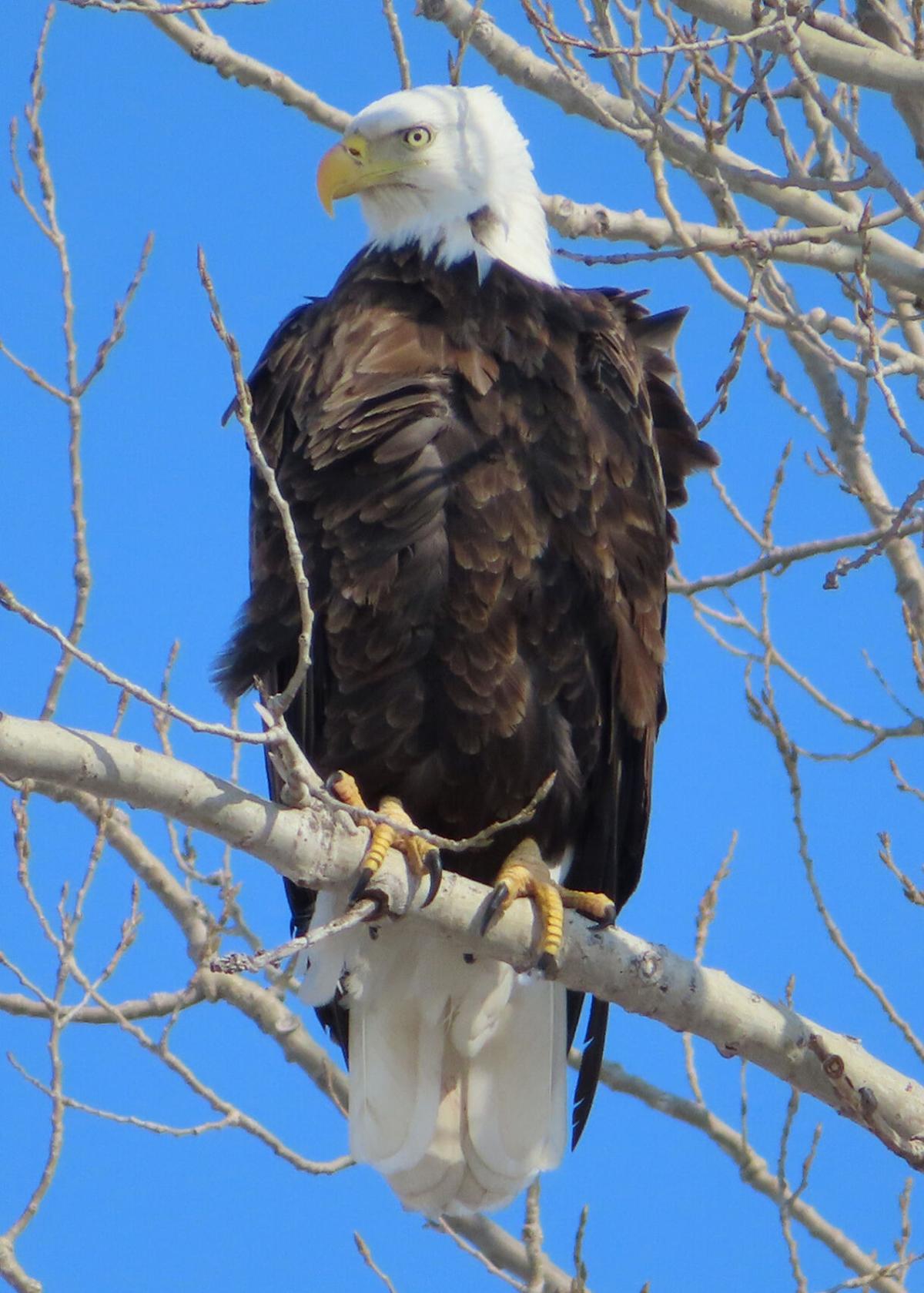 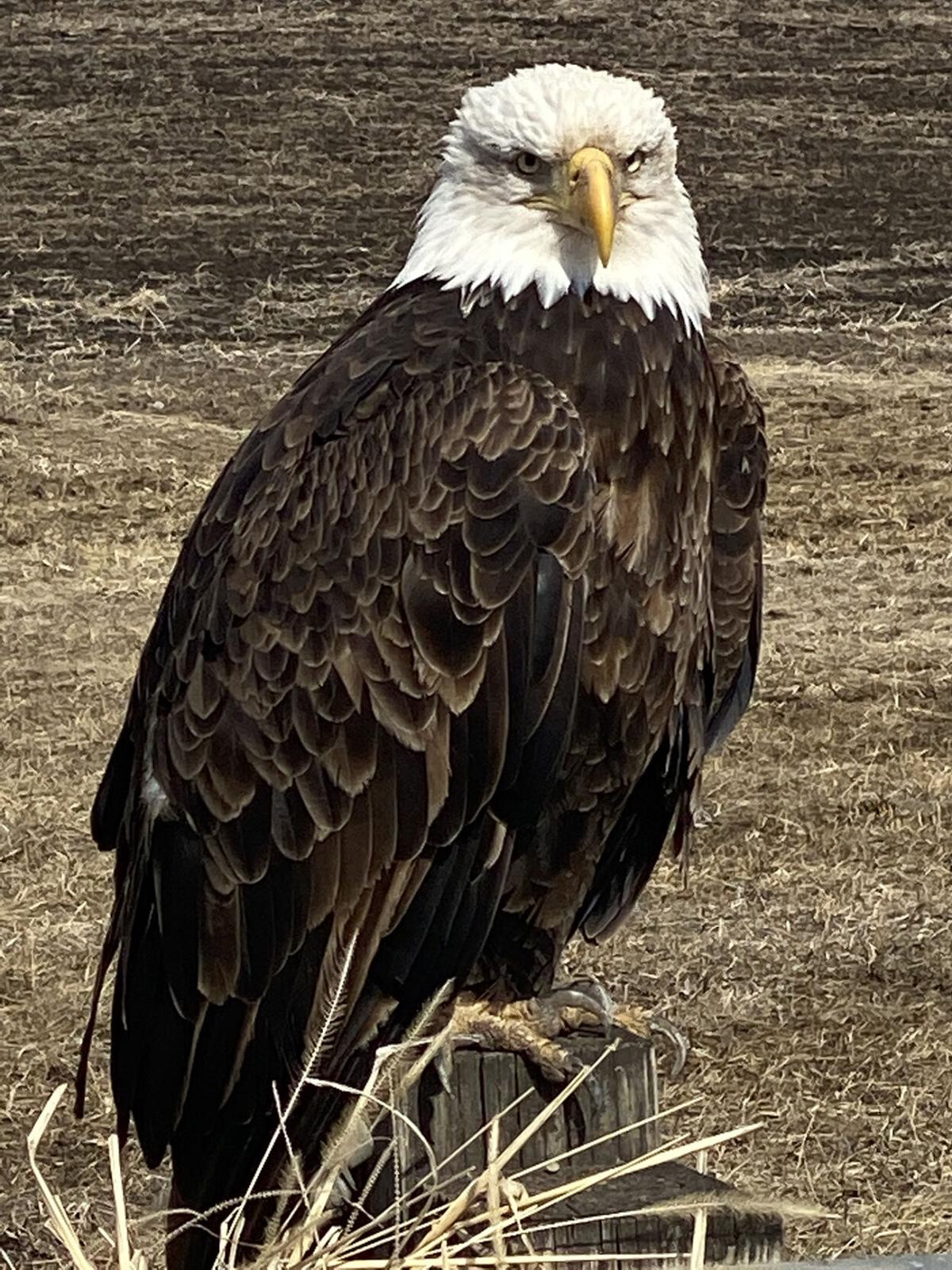 Andy Runer of Hiawatha got up close and personal with this Bald Eagle, spotted sitting on a post south of Hiawatha last Saturday.

Eagles once soared over all of North America, but the population became sparse in the mid 20th century due to the increased use of insecticides.

This eagle was captured soaring over the land at Loess Bluff National Refuge near Mound City.

Ron Boggs snapped this photo of two eagles high atop a tree near a nest at Loess Bluffs. The eagle in the foreground had just taken flight, leaving the other eagle to watch over the nest.

Susan Bryant of rural Robinson snapped a photo of this eagle in a tree not too far from where she lives.

Andy Runer of Hiawatha got up close and personal with this Bald Eagle, spotted sitting on a post south of Hiawatha last Saturday.

They once soared over the entire North American continent – king of the skies, their piercing gaze searching for prey in the prairies or waters far below.

The Bald Eagle once offered a thriving population and it wasn’t unusual to find one perched on a fence post, or high atop a half dead tree. However in the mid 20th century, the Bald Eagle population diminished – due to the widespread use of insecticides, according to an article by Benedictine College in Atchison that featured information from Michael Watkins, a wildlife biologist with the U.S. Army Corp of Engineers (USACE) and Benedictine Professor Dr. Virginia Winder. The pair co-authored a paper together – about the rebounding of the Bald Eagle population — that was printed in The Journal of Raptor Research.

According to their research, a resurgence of the state’s Bald Eagle population from a first nesting site spotted at Clinton Lake near Lawrence in 1989 grew to 137 documented nesting pairs in 2018.

Throughout several years, Winder reported that capture-mark-resighting efforts with 272 banded bald eagles took place to track nest success. Winder noted that habitat in and around large artificial reservoirs was important for nesting pairs. As the population grew, the nesting territories also grew.

This is why local residents have been spotting Bald Eagles and Loess Bluffs National Wildlife Refuge near Mound City has seen record populations of migrating Bald Eagles this past winter.

“I’ve taken a few photos this past year,” said Susan Bryant of rural Robinson. “Such beautiful birds – I’m happy that we have some here year ‘round!”

Bryant said she has spotted Bald Eagles when driving between Robinson and Hiawatha, east of Robinson, and south toward Everest.

“Once I started looking, they are all over!” she said. “We have seen a pair together several times.”

She said the first time she saw a pair locally was taken on a snowy Thanksgiving in 2019 from the Robinson Wolf River bridge. She has also taken photos off U.S. 36 Highway between Hiawatha and Robinson, north of Everest and near the Upper Wolf Church on Sumac Road.

Another local resident – Andy Runer of Hiawatha – snapped a photo of a Bald Eagle up close and personal near the road in an area south of Hiawatha last Saturday. He and his wife, Kendelle, also shared video of the regal bird – taken from within their vehicle.

With the close proximity of Loess Bluffs National Wildlife Refuge near Mound City, Mo., it’s only natural that the flight of the Bald Eagles might detour south a bit as they find food, shelter and water for a respite in Brown County.

Loess Bluffs National Wildlife Refuge, located along the Missouri River, is a national wildlife refuge in northwestern Missouri, established in 1935 by President Franklin D. Roosevelt as a refuge and breeding ground for migratory birds and other wildlife.

Ron Boggs, a member of the Friends of the Loess Bluffs National Wildlife Refuge board, has photographed several Bald Eagles at the refuge. In fact, two of his photographs were chosen by the national park as artwork for this newly printed brochure this past year.

Boggs said he became interested in photography during a two-week trip to Ireland 6 years ago and since then has gone through four different Nikon cameras as his hobby and love for photography grew. As a member of the Friends board at Loess Bluffs, he is on site a few times a week and takes advantage of times to photograph the extensive wildlife at the refuge.

The driving tour features hundreds of acres of marshland, prairie, forests and more that are perfect for the migration of various bird species, along with establishment of other wildlife. Just this past week, this reporter took part in the driving tour and spotted three Bald Eagles in the distance, numerous swans and other water fowl and dozens of beavers working on damns in the marshland. In addition, there were literally thousands of snow geese at the refuge.

Much of the marshland was still frozen over, but as the weather continues on a warming trend into spring that will melt and more birds will come, Boggs said. Although the typical migration period for Bald Eagles is in later fall and through December, Boggs said the staff at Loess Bluffs is expecting more to travel through on their way back to northern forests and waters this spring or stay and nest there at the refuge.

“It depends on the snow geese too and how long they stay around,” he said, noting there were close to 365,000 snow geese at the refuge earlier in the week, along with seven adult eagles and 14 immature eagles.

Boggs said there are three established nests at the refuge and he has photographed many Bald Eagles there. Almost identical with the exception of size as the female is usually larger – the Bald Eagles take turns guarding the nest. Boggs said much of the time it appears the female is with the eggs and the eaglets, but the male will guard the nest when the female leaves to hunt.

The first recorded successful Bald Eagle nest fledged three young eaglets in the summer of 1997 at the refuge. The past 24 years, that number has continued to grow and as many as 300 immature and adult Bald Eagles and occasional gold eagle may be seen during the migration peak season, usually by the first part of December.

Boggs said this year was a banner year for migration as nearly 600 Bald Eagles migrated through Loess Bluffs area. Many of those have strayed through other areas in Northwest Missouri and Northeast Kansas, leading to many Bald Eagle sightings.

While the visitor’s center and other facilities at Loess Bluff have been closed to the public due to the COVID-19 pandemic, the driving tours are still open as gates open 30 minutes prior to sunrise and close 30 minutes following sunset daily. For more information about the national refuge go to https://www.fws.gov/refuge/loess_bluffs/ or find information at www.facebook.com/LoessBluffsNWR.

(Some information for this article was obtained from an article published by Benedictine College with Dr. Virginia Winder.)