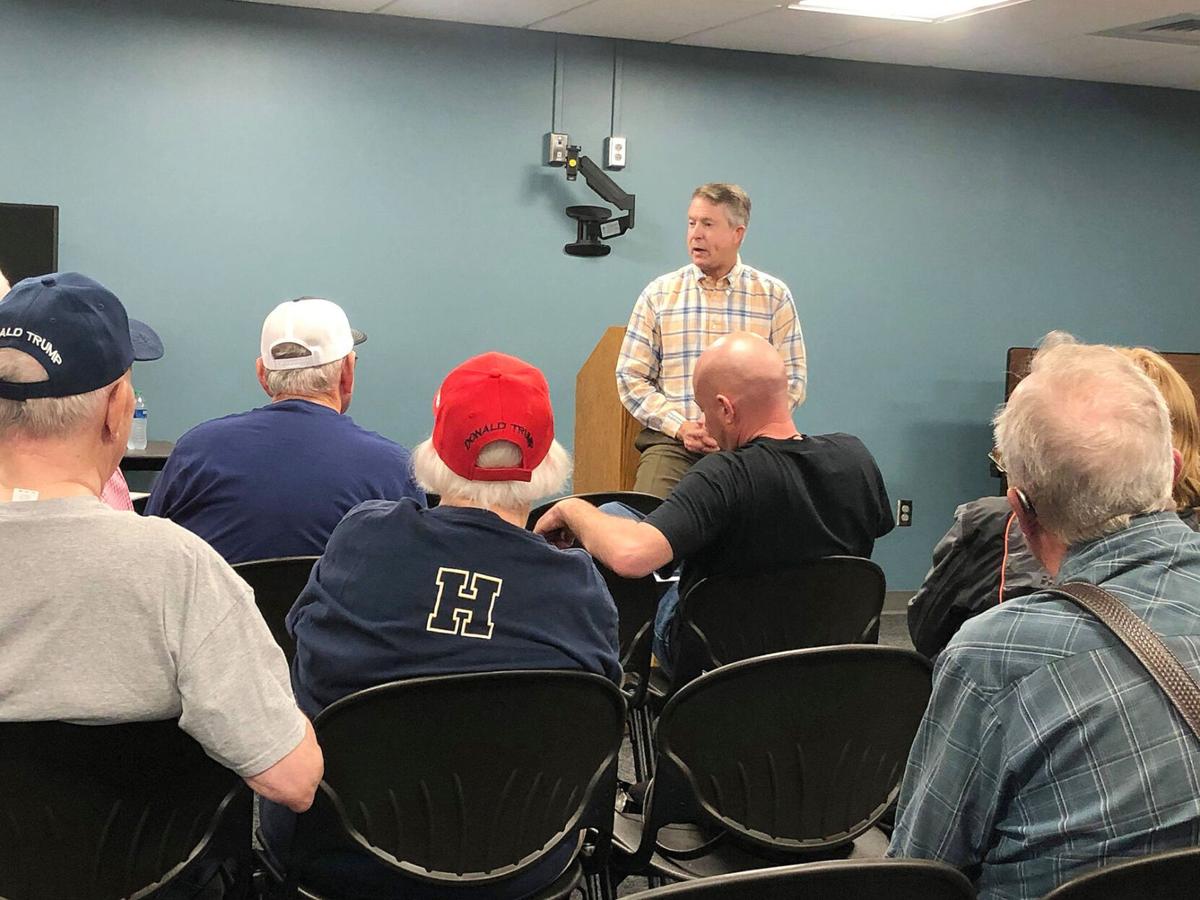 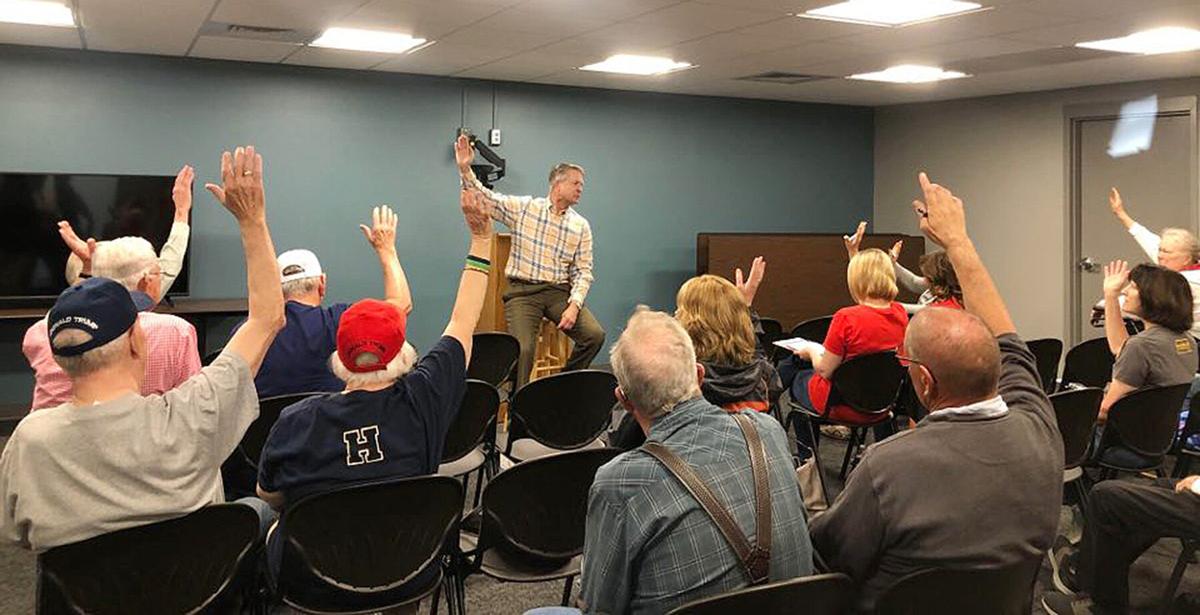 U.S. Senator Roger Marshall interacts with a group gathered at the Morrill Public Library for a town hall Saturday morning. 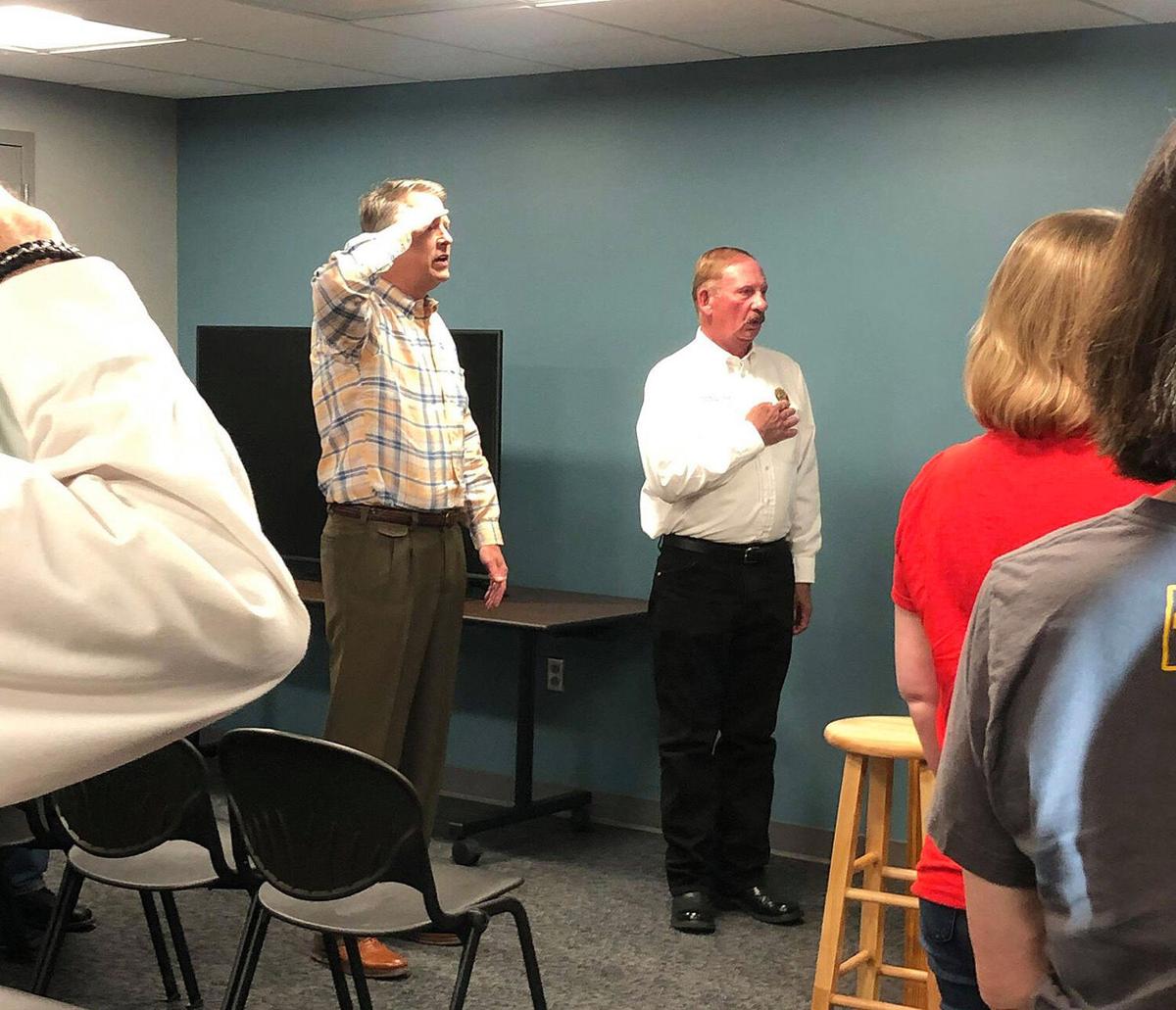 U.S. Senator Roger Marshall was accompanied by Ret. Col. William Vonderschmidt, commander of Hiawatha Post 66, as he led the group in the Pledge of Allegiance to start the town hall at the library.

U.S. Senator Roger Marshall interacts with a group gathered at the Morrill Public Library for a town hall Saturday morning.

U.S. Senator Roger Marshall was accompanied by Ret. Col. William Vonderschmidt, commander of Hiawatha Post 66, as he led the group in the Pledge of Allegiance to start the town hall at the library.

“What this country needs is a message of forgiveness.”

Those were the words of U.S. Senator Roger Marshall M.D. during a town hall Saturday morning at the Morrill Public Library in Hiawatha. Around two dozen people came out for the town hall and issues addressed included government reform, voter ID and election issues, gas and oil prices, diversity, wind farms, racism and much more.

Sen. Marshall led with the Pledge of Allegiance, accompanied by Ret. Col. William Vonderschmidt, commander of the American Legion Homer White Post 66 based in Hiawatha. His first question of “how many of you think we need to tear down the fence around the Capitol” was met with a unanimous show of hands and a shout of “Hell yah!”

He also asked how many of those in attendance felt there was a crisis at the border and most of the room raised their hands again.

He also asked how many veterans were in the room — several raised their hands again, including several members of the Brown County Honor Guard — and thanked Hiawatha Police Officer Dustin Winter for being in attendance, noting that he was a strong supporter of police as his father was an officer for 25 years.

Kendra Heinen and Jessica Gigstad — representing the Brown County Liberty Alliance — told Sen. Marshall about their group. Heinen said they formed due to issues with local government enforcing mask issues and have also addressed other concerns about liberties and freedoms for local citizens. She said their group has sparked interest in neighboring counties for the formation of similar organizations.

That led to a discussion of mask mandates, which Sen. Marshall said he didn’t feel the government should step in to enforce that. He also noted there was lots of conjecture on the rules that were suddenly being enforced for COVID and said the 6-feet spacing dates back to a 1930’s tuberculosis study and was not necessarily updated for modern times.

Sen. Marshall said he felt national media helped circulate a mass hysteria where the average person suddenly felt they could die at any moment of the coronavirus COVID-19.

Sen. Marshall, who is an OB/GYN, said he felt the government knew within that first month that the virus would primarily impact the elderly and patients with health risks.

“A little bit of common sense goes a long way,” he said.

Sen. Marshall also discussed the HR1 bill, or Senate Bill No. 1, which addressed election reform. Part of this includes a Voter ID and ballot harvesting — which is thought to make “voting easier and cheating harder,” but Sen. Marshall said he felt it was going to be a hard issue to address and felt it should be left to individual states to fix.

“I feel it decreases the integrity of the election,” he said.

One man said he felt his faith in government was at an all-time low and asked what was the answer. He had a concern over a balanced budget and spending and said there had not been a federal budget in 12 years.

Sen. Marshall said he was every bit as frustrated over certain issues as the nation’s citizens. There were several supporters of President Donald Trump in the room and Sen. Marshall said he speaks with him frequently and appreciated the words of encouragement from the group.

Sen. Marshall touched briefly on a question of wind energy — noting it’s a very personal issue and that county commissioners should make sure they are informed.

He also discussed the nation’s value system — noting he felt President Joe Biden was creating a “nanny” system where the government took care of it’s citizens from infancy to death. Sen. Marshall said he believed in the purposes of the nation created by the founding fathers where people were guaranteed “the pursuit of happiness” but not necessarily guaranteed happiness and an assurance that the government would take care of everything.

He said the country was based on Godly principles by Godly men who foresaw that families would be raised and cared for by fathers, noting that the family value system in the U.S. was sadly lacking.in many ways.

Sen. Marshall also touched on the rampant issue of racism, noting that 9 percent of the nation speaks like they are representing 95 percent of the citizens.

“You don’t defeat racism by being racist,” he said. “We should celebrate our diversity — it’s what makes us great. What this country needs is a message of forgiveness.”

And the secret to happiness is...