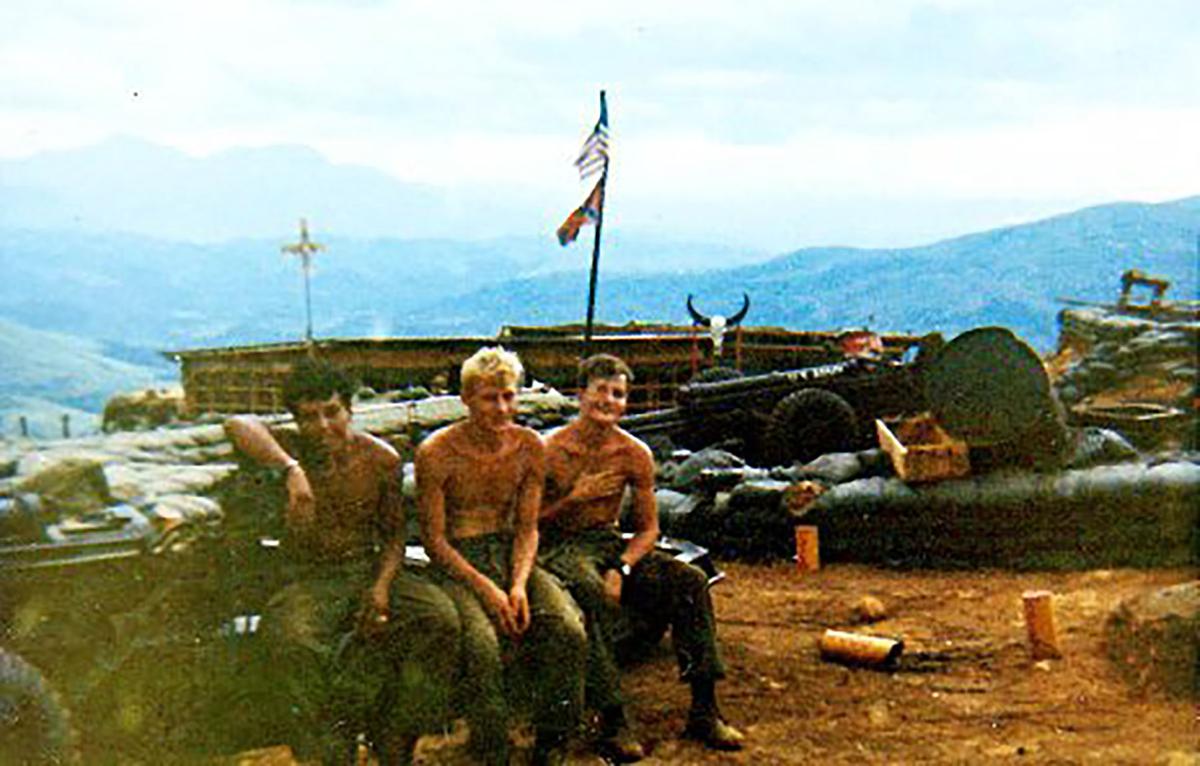 J.C. Strube (far right) is sitting next to Brad Gort, who recently came to visit Strube’s memorial and grave in Brown County. Strube was killed in action when their gun crew was over run by the enemy June 11, 1969 in LZ East Republic of South Vietnam. Also pictured is Jeffrey George, another fellow soldier. 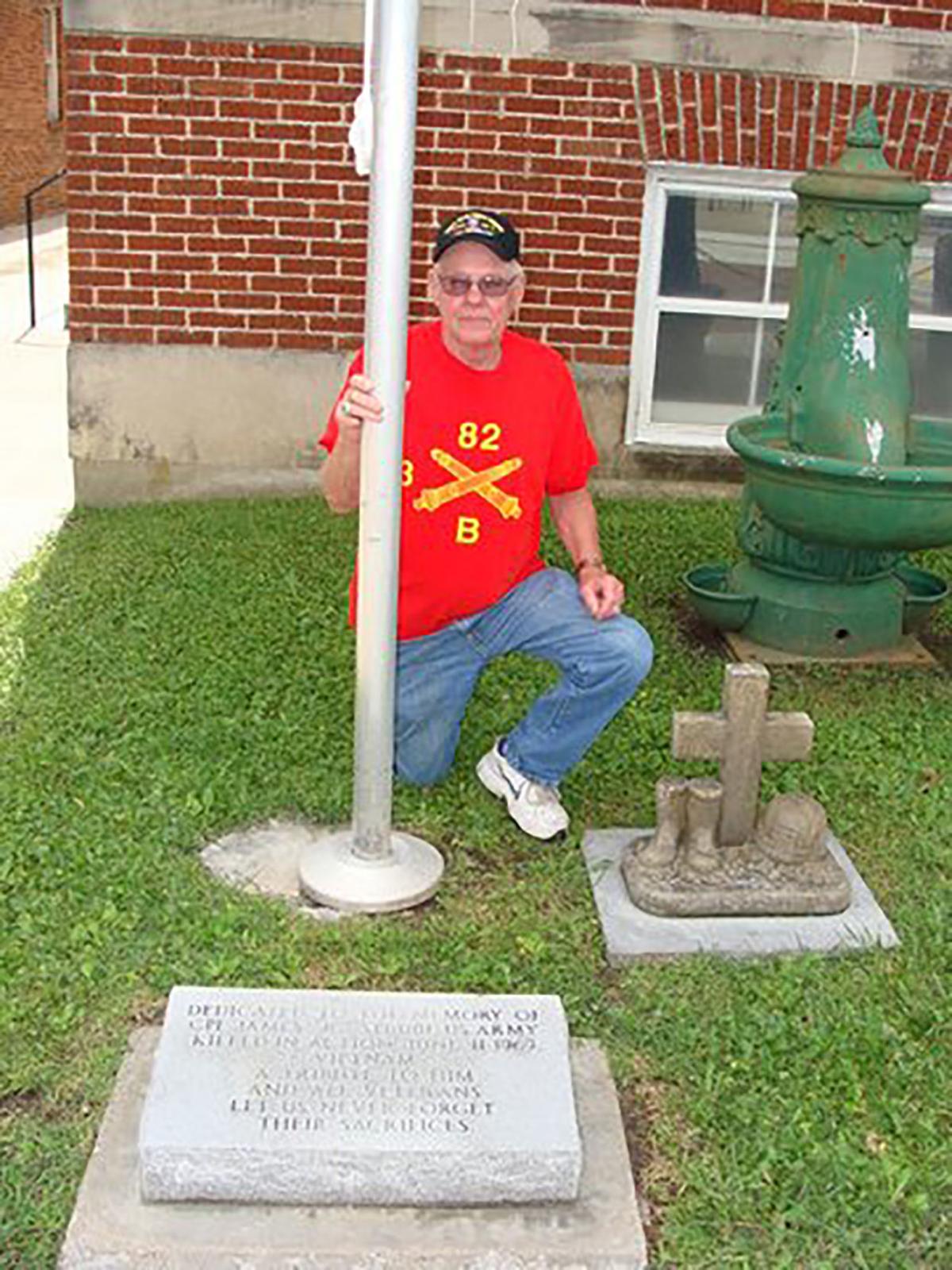 Brad Gort of Montevideo, Minn., is pictured next to a memorial for his fellow soldier J.C. Strube, who served on the same gun crew in Vietnam when he was killed June 11, 1969. Gort himself was severely injured when their crew was over run by the enemy and spent 5 1/2 months in the hospital.

J.C. Strube (far right) is sitting next to Brad Gort, who recently came to visit Strube’s memorial and grave in Brown County. Strube was killed in action when their gun crew was over run by the enemy June 11, 1969 in LZ East Republic of South Vietnam. Also pictured is Jeffrey George, another fellow soldier.

Brad Gort of Montevideo, Minn., is pictured next to a memorial for his fellow soldier J.C. Strube, who served on the same gun crew in Vietnam when he was killed June 11, 1969. Gort himself was severely injured when their crew was over run by the enemy and spent 5 1/2 months in the hospital.

A Minnesota man recently made a trek to Brown County to pay respects to a fellow soldier who was killed in action in Vietnam.

Brad Gort of Montevideo, Minn., was an Army soldier serving in the LZ East Republic of South Vietnam in June of 1969. He was part of an eight member gun crew stationed there for a short time with Battery B, 3rd Battalion and the 82nd Artillery of the 196th Infantry. Gort said that since their crews moved around frequently there wasn’t a lot of time to get close to everyone — except the other 7 members on the gun crew.

“We never knew when we would have a fire mission,” Gort said. “We always had to be ready to go.”

In June 1969, they were stationed at LZ East Republic of South Vietnam for three to four days. Also part of this same gun crew was James “J.C.” Strube — a farm boy from Powhattan, who had been deployed through the National Guard’s 69th Brigade of Horton. Strube arrived in Vietnam in March of that year, and his last night on earth was June 11, 1969 when LZ East and his gun crew were overrun by the enemy and he was killed.

Seventeen soldiers lost their lives and Gort was severely injured and spent 5 1/2 months in the hospital. Another member of the gun crew, Ross Johnson, earned the Silver Star and saved Gort’s life by killing several of the enemy in order to get him flown out on a Medi-vac helicopter.

Following his recovery he served another year and a half at Fort Sill, Okla., before leaving the military to work in construction and heavy equipment for many decades. He married, had five children, eight grandchildren and two great-grandchildren and is now retired in his home state of Minnesota, where he helps a local farmer part-time.

Fifty years later, he has not ever forgotten the men he served with and earlier in the summer his daughter located all of the men from his gun crew in the 82nd artillery.

Sam Schuetz, with the American Legion Homer White Post 66, said former Cmd. Steve Winter had posted photos from a memorial dedicated to Strube on social media. Through this, months and years later, Gort’s daughter was able to track down where Strube was from.

“We never really knew that much about each other,” Gort said. “We basically spent every moment together, but what I remember most about Jim (JC Strube) was that he wrote home all the time. We used to tease him about he must have a lot of girls back home.”

Gort said he was the assistant gunner and remembered Strube helped load the guns with ammo.

Gort said what he regretted was he never got anyone’s addresses. Once he was injured and recovered he never went back.

Strube was the All-American kid serving his country in Vietnam, said Schuetz, who graduated with him from Powhattan High School in 1965. There were only a handful of young men graduating from this small Brown County school, so Schuetz knew him very well.

Gort said his daughter found everyone he served with and told him Jim Strube was from Hiawatha. Winter got him in touch with Schuetz and they set up a visit in late August.

“I wanted to come down and pay my respects to the family and Jim,” he said.

As a soldier killed in action, Strube is honored with a memorial dedicated 3 1/2 years ago at the flagpole at the Veteran Memorial Auditorium in downtown Hiawatha, along with a memorial at the former National Guard Armory in Horton. Gort said he visited both memorials and also where Strube was buried at Powhattan Cemetery.

It was an emotional meeting with J.C. Strube’s brother, Paul Strube — who lives in Holton. Schuetz said they, along with Steve Winter and fellow Powhattan graduate Owen Jacobsen — all shared a dinner during Gort’s visit and many memories of the young Brown County soldier killed in service of his country.

Gort said he also has met up with the other men from their gun crew for a reunion in Illinois and plans to attend a full 196th Infantry reunion next year in Gettysburg. The artillery and infantry units served together while in Vietnam.

Fifty years later from that fateful night June 11, 1969, Gort said he is thankful that he survived, but thinks all the time about the guys who are no longer here.

What a nice article and amazing journey for him 50 years later. I’m so glad that he got to visit and pay his respects to Jim JC Strube’s memorial sites as well as meeting JC’s family and classmates. He’s getting a sense of closure. I am honored to call this man, Brad Gort, my father.