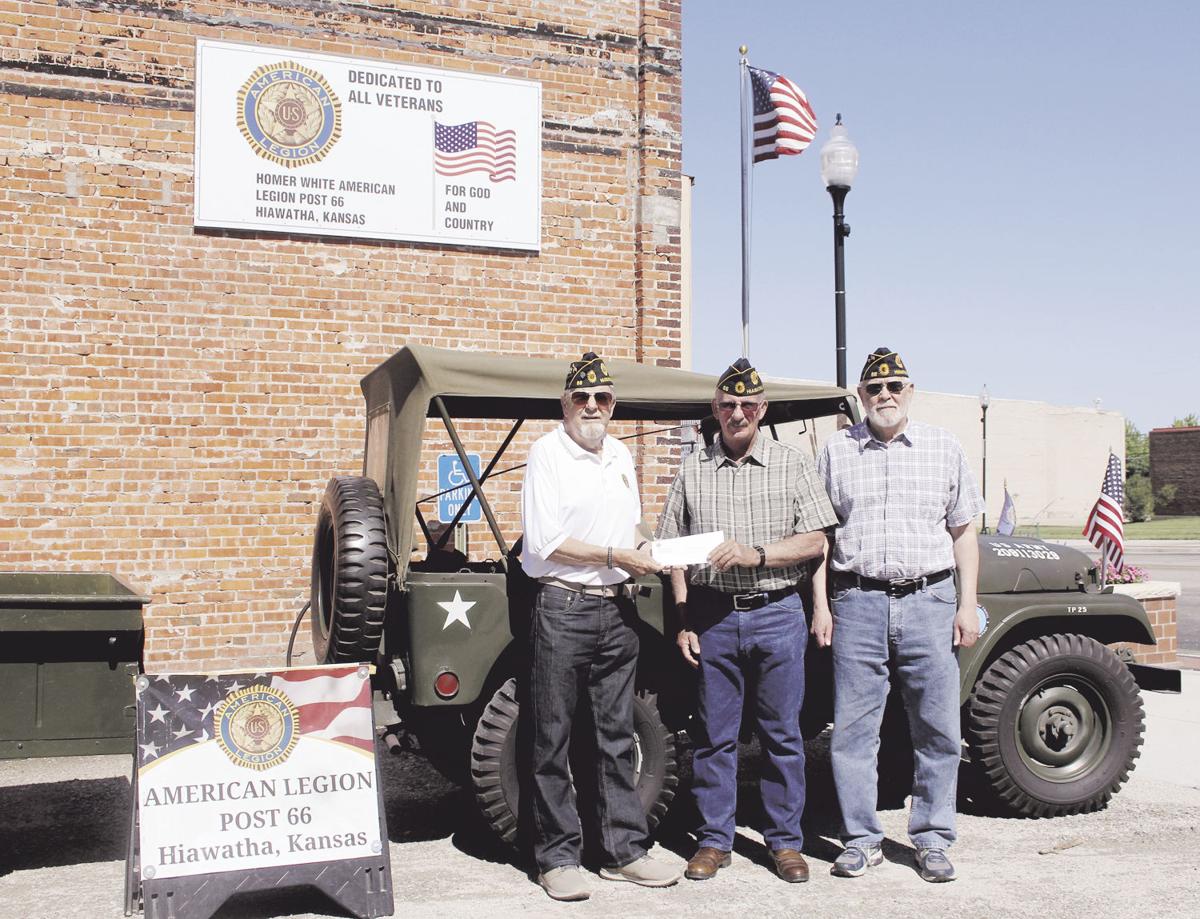 Robert Sines (left), public relations officer for Homer White American Legion Post 66, presents a check for $1,000 from Kaiser Willys, where his story was published on the website’s blog “Willys Jeep Life Stories,” to Post Commander Ret. Col. William Vonderschmidt (center) and Post member Steve James. They are standing in front of the Willys Jeep that Sines wrote his story about. 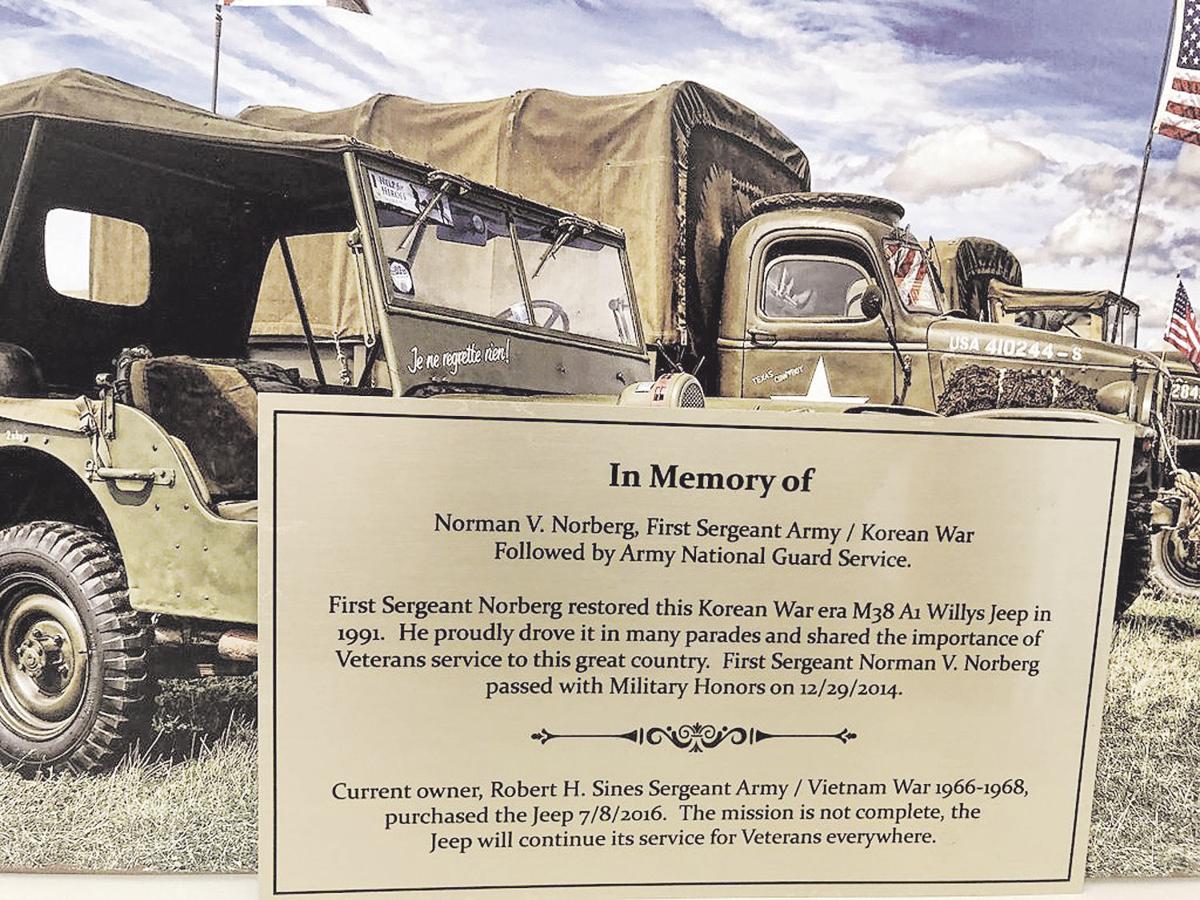 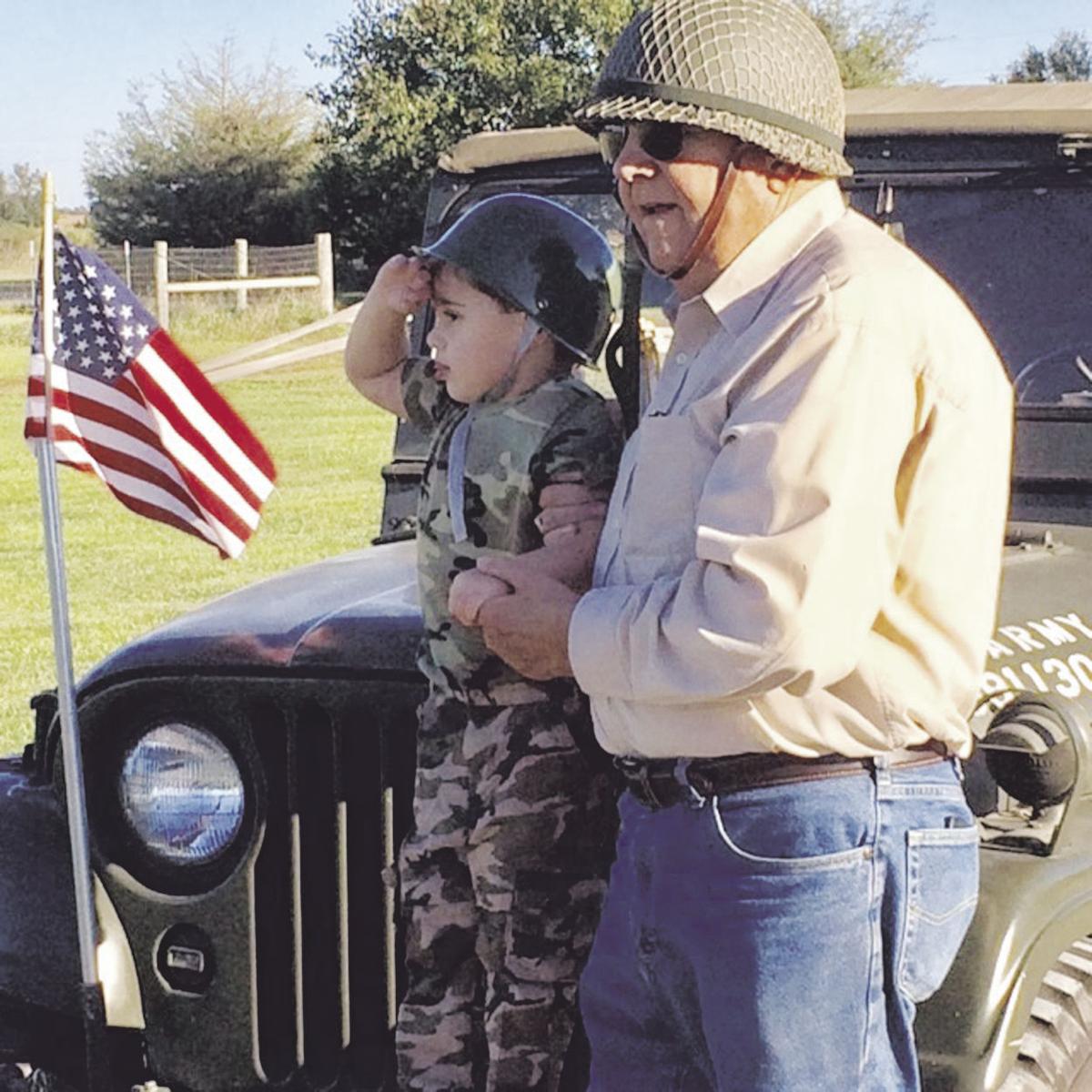 Sines with his grandson Jackson and the Willys Jeep. 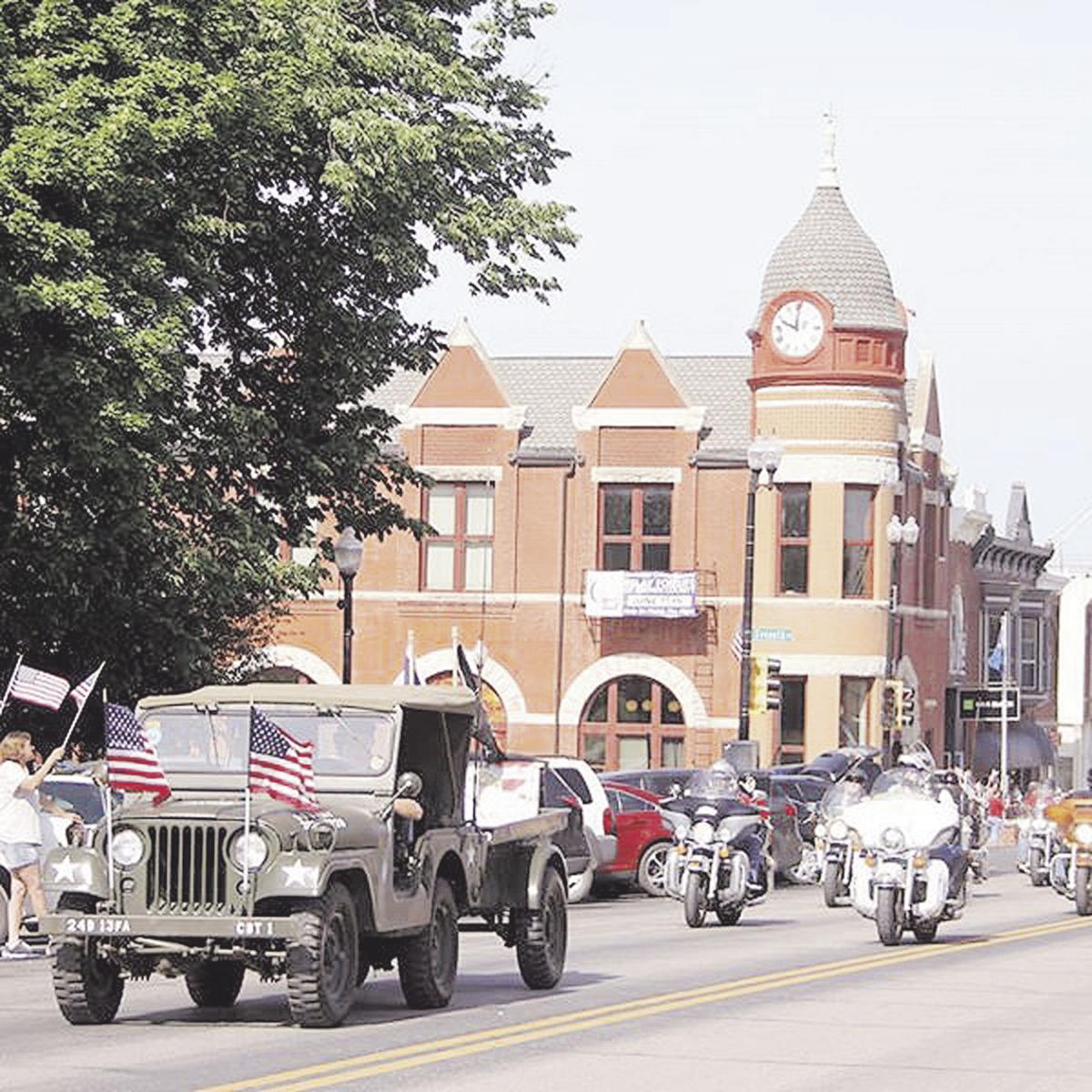 Here, Sines is seen leading a group of Patriot Riders through Hiawatha in his Willys Jeep.

Robert Sines (left), public relations officer for Homer White American Legion Post 66, presents a check for $1,000 from Kaiser Willys, where his story was published on the website’s blog “Willys Jeep Life Stories,” to Post Commander Ret. Col. William Vonderschmidt (center) and Post member Steve James. They are standing in front of the Willys Jeep that Sines wrote his story about.

Sines with his grandson Jackson and the Willys Jeep.

Here, Sines is seen leading a group of Patriot Riders through Hiawatha in his Willys Jeep.

The life story of a Willys Jeep brought some unexpected financial support to the American Legion Homer White Post 66.

Robert Sines of Hiawatha shared his “Willys Life Story” with the Kaiser Willys company through it’s online blog in May — just in time for Memorial Day.

Sines said he checks this website frequently to read stories about people who have Willys Jeeps similar to his — a 1950s style Jeep that was identical to one he drove when he served in the Vietnam War. Which is why he tracked one down for purchase.

Sines is often seen driving his Willys Jeep in local parades or at special events that promote veterans.

“The jeep has been in over 80 parades, used for several charity functions, traveled to 10 states and has been associated with Homer White Post 66 for four years,” Sines said, noting he even took it to Arizona for a surprise parade to honor his brother, who is a veteran.

He wanted to share his story of the Jeep on the Kaiser Willys blog and sent it in, along with photos of the Jeep’s many adventures.

“Almost a month later, they sent me an email saying they were going to pay me for my story,” Sines said. “I figured it would be like a hundred bucks. Then I get a check for $1,000!”

Sines said he wanted the check to be made payable to the Homer White Post 66 to be used to help spruce up the American Legion center. Post Commander Retired Col. William Vonderschmidt said the money will be used to paint the inside of the building and do other things to help the Post get ready to celebrate it’s 100th anniversary later this summer.

Sines said he is happy to share the Jeep with others — in fact, while he was parked out front of the Legion Post earlier this week a lady passing through asked to get her photo with the Jeep. She said her Dad served in Korea and had driven a Jeep just like this.

“That’s why I got it,” he said. “I want to share it with others and build awareness of current and past veterans. That’s what the Legion does, and I wanted to link the Jeep to our Post.”

Sines plans to have his Jeep at Saturday morning’s flag installation for the Flags For Forgotten Soldiers — an organization that brings awareness to and honors soldiers who have taken their own lives. The installation will start at 8 a.m. near the Skate Park (area just west of the Fisher Community Center) and Sines and other Post representatives will be on side between 8:30 and 8:45 a.m. if community members want to stop by and see the Jeep.

What follows is Sines’ story he shared with the Kaiser Willys blog:

A Willys M38A1 used in Support of Veterans

How I found this Jeep and purchased it: I’m a Vietnam Veteran and had been searching for a Jeep for several years. Looking online and all around, many were simply non-restorable and others had been modified for mud runs, etc. I live in North East Kansas on a small ranch but looked all over the states. One day when online I was looking in classified ads in Minneapolis, MN area and found a unique ad “Jeep for sale with conditions”. I called the owner up and before long took off with my side kick and cousin Dick Sines to see this Jeep “with conditions of sale”.

From the first moment I knew this Jeep is exactly what I was looking for. Not to show too much desire and to negotiate I asked the big question “what’s the conditions”. The sellers name is Eric Norberg, he and his wife Jenny met me on the driveway. Turns out the M38A1 belonged to Eric’s dad, a retired Army Veteran. His fathers name was Norman Norberg and he’s the one who restored it to original condition in 1991. Norman was active in VFW and Legion and used the Jeep for parades, events and all activities military.

So to the son I asked the price and before sharing that he mentioned some preferred conditions: My mind was turning, imagining all kinds of things thinking the M38A1 must stay in Minnesota, or it has no title etc. Eric hit me with the big question – “Are you a Veteran?” the answer was yes, Army Vietnam. Next question “what are you going to do with the Jeep if we sell it to you?” I replied “ Well it’s restored so it won’t need fixing, I will garage it at my place and use it in concert with my American Legion Post 66 and help to build awareness of our Veterans both active and retired”. BINGO! I passed the test as their father had requested – please sell it to someone who will respect it and keep it in public eye to support veterans.

The conditions were easier than I thought and the deal was closed – We loaded the Jeep on our car trailer and as we started to leave Eric and Jenny had tears in their eyes as did a group of their neighbors as they stood by and saluted us and the Jeep – To which we smartly saluted back. The Jeep had become an iconic symbol in the neighborhood, all the kids rode in it at one time or another and they hated to see it go.

When I got it home I made a decision to keep in touch with the Norberg’s and always send them pictures of the many events the Jeep now know as “Norman” participated in. To be sure he was remembered I added a small plaque to the dash board paying tribute to First Sargent Norman Norberg. Hundreds have seen the plaque and I always enjoy telling the story.

For Christmas of 2016 I had a 8×10 wooden plaque with metal engraved memorial for 1st Sgt. Norman Norberg and intended to get it to them by mail for the Holiday. My bad, I didn’t get it in the mail in time and the gift was late by a week. A call came in from Jenny Norberg , I assumed they received the plaque, but the next comment threw me, she said “how did you know?” I paused and thought well it was for Christmas and it’s late, Jenny said it came on “Normans Birthday” he would have been so proud. Eric can’t talk right now but we both appreciate this so much! – talk about fate. I was speechless I had no idea it was Normans birthday.

In closing I have attended over 80 events in 10 states and still going at 72 years of age. The last was the “Honor Flight that didn’t get off the Ground” all details are here – you have to check this out

I have been designated for an Honor Flight this May – wish I could take the Jeep.