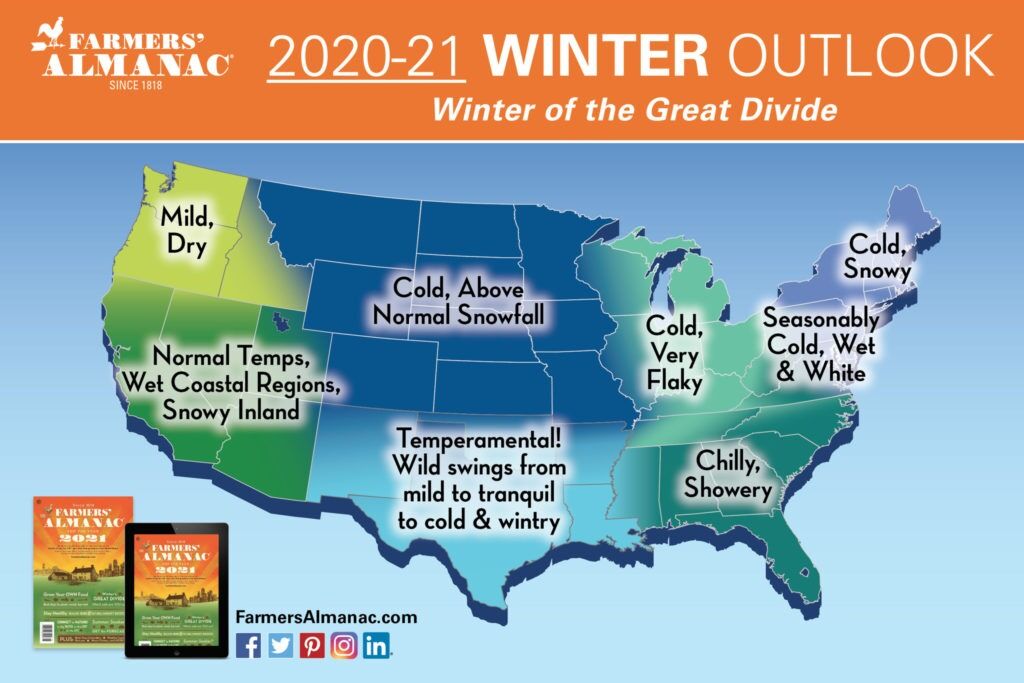 The Farmers Almanac map shows the extended forecast for the winter.

The Farmers Almanac map shows the extended forecast for the winter.

Cold and snowy in the north. Drought in the west. And everything crazy in between!

THE COLD AND SNOWY SIDE

If you love the cold of winter, you’re going to love our forecast if you live in the northern half of the country. Our long-range forecast is calling for a cold winter with normal to below-normal temperatures in areas from the Great Lakes and Midwest, westward through the Northern and Central Plains, and Rockies.

Remember last year’s almost snow-free winter in the Northeast? Well, this year our prediction is very different, with the possibility of a blizzard hitting the Mid-Atlantic and Northeast states during the second week of February. This storm may bring up to 1-2 feet of snow to cities from Washington, D.C. to Boston, Massachusetts!

The Great Lakes region will get its fair share of snow but expect above-normal snowfall if you live in the western Dakotas, northern portions of Colorado and Utah, as well as Wyoming, Montana, Idaho, and central and eastern sections of Washington and Oregon.

Eastern Ohio and Kentucky can expect a significant snowfall in the beginning of February, and the Southern Plains are on target to receive copious amounts of snow, sleet, and rain later on that same month.

And for those living in the eastern half of the country, you may get clobbered during the final week of March, but what falls from the sky will depend on where you live—this storm will track from the nation’s midsection to central New England and bring a significant late-season snowfall to the north of its track, and showers and thunderstorms to the south.

The Southeastern part of the country, excluding the Tennessee Valley, will experience average precipitation levels with temperatures chillier than normal overall. Get those sweaters and parkas out of storage!

Areas across the Desert Southwest, (Arizona and southern California), are predicted to experience a dry and generally mild winter. Not good news considering signs that drought conditions were beginning to ramp up in these regions at the close of the winter of 2020.

Right along the Pacific Coastal Plain, from northern California and points north through western portions of Oregon and Washington, rainy and wet weather will be the rule for the winter ahead.

In New Mexico, Texas, Oklahoma east into Arkansas, and Louisiana, Mother Nature will mix intervals of tranquil weather with occasional shots of cold and wintry precipitation but overall may seem to be a bit “temperamental.”

Winter’s “wild card” will be the region covering the Tennessee and lower Ohio River valleys, north and east up through New England, where we can expect a rather intense weather system. This weather system will keep the storms active, delivering a wintry mix of rainy, icy and/or snowy weather throughout the season. Learn how the Farmers’ Almanac makes its predictions.

More arrested, including several from Pennsylvania, in Capitol riots