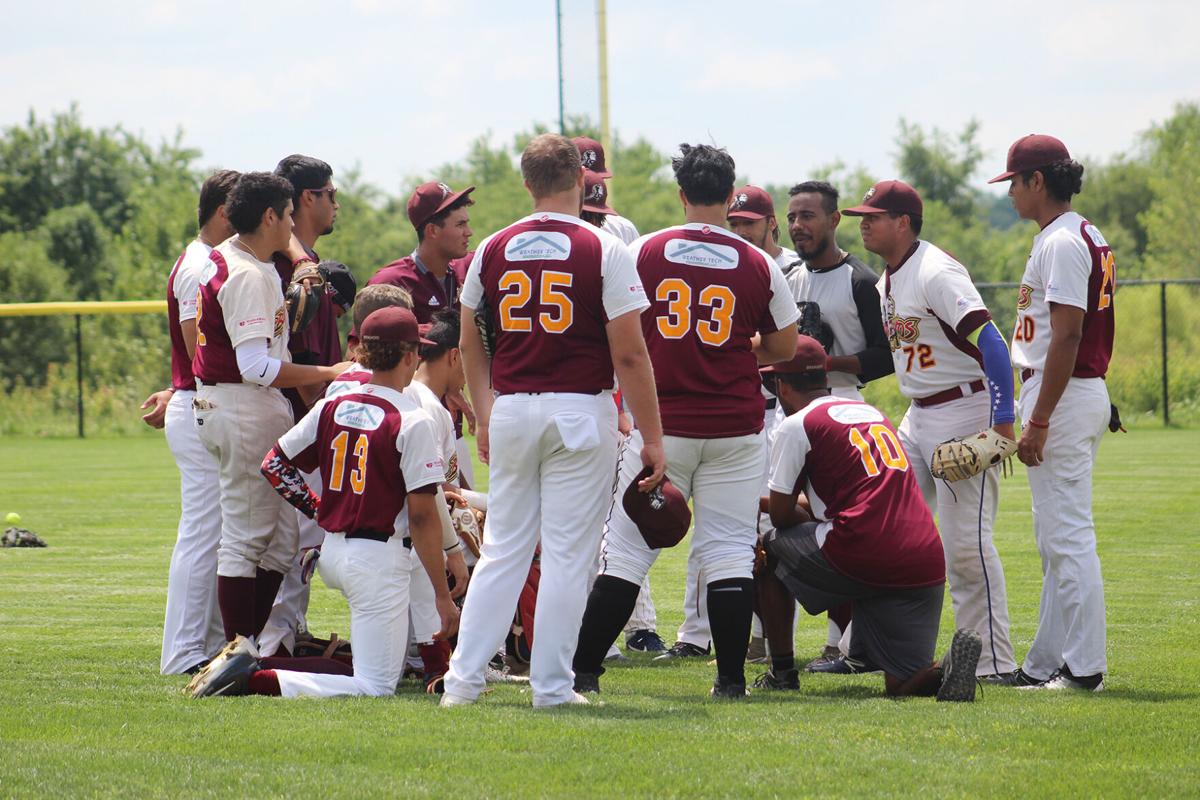 The Bravos team gathers before the game on Sunday. 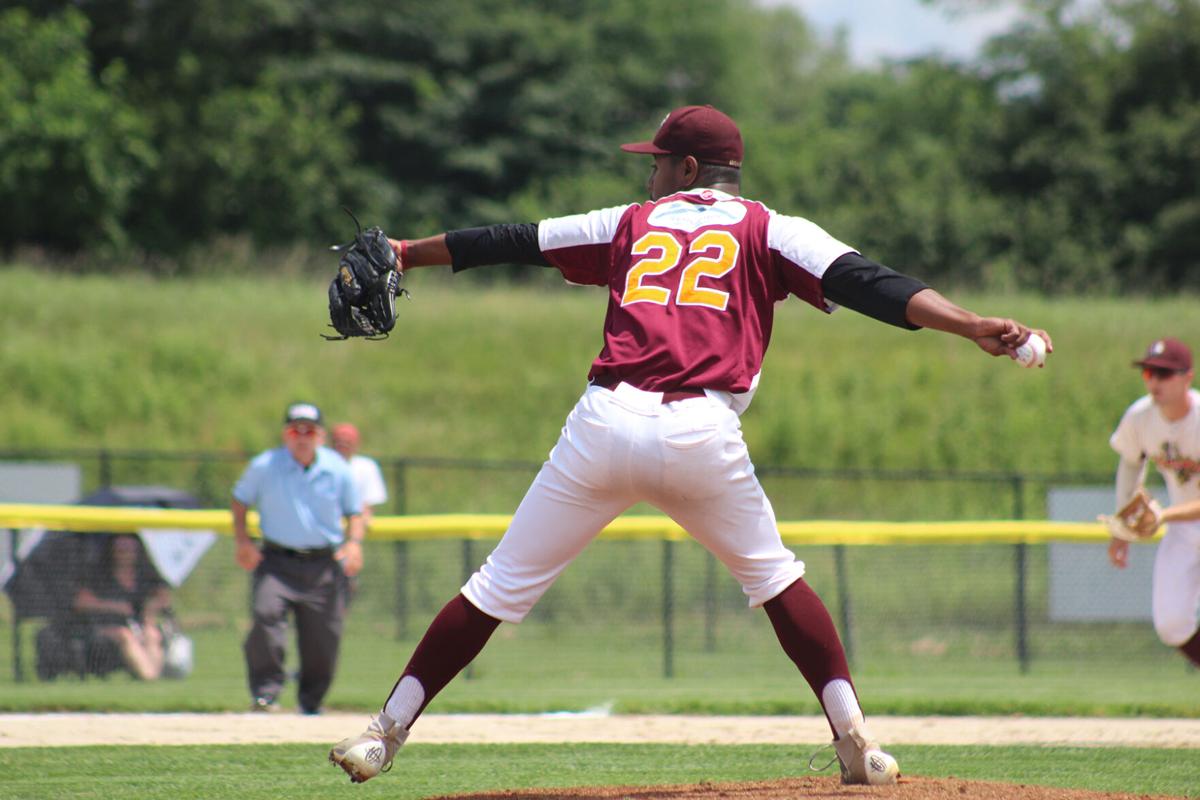 Bravos pitcher Daniel Castillo reaches back to throw a pitch. In the background is Brandon Brewer, ready at third. 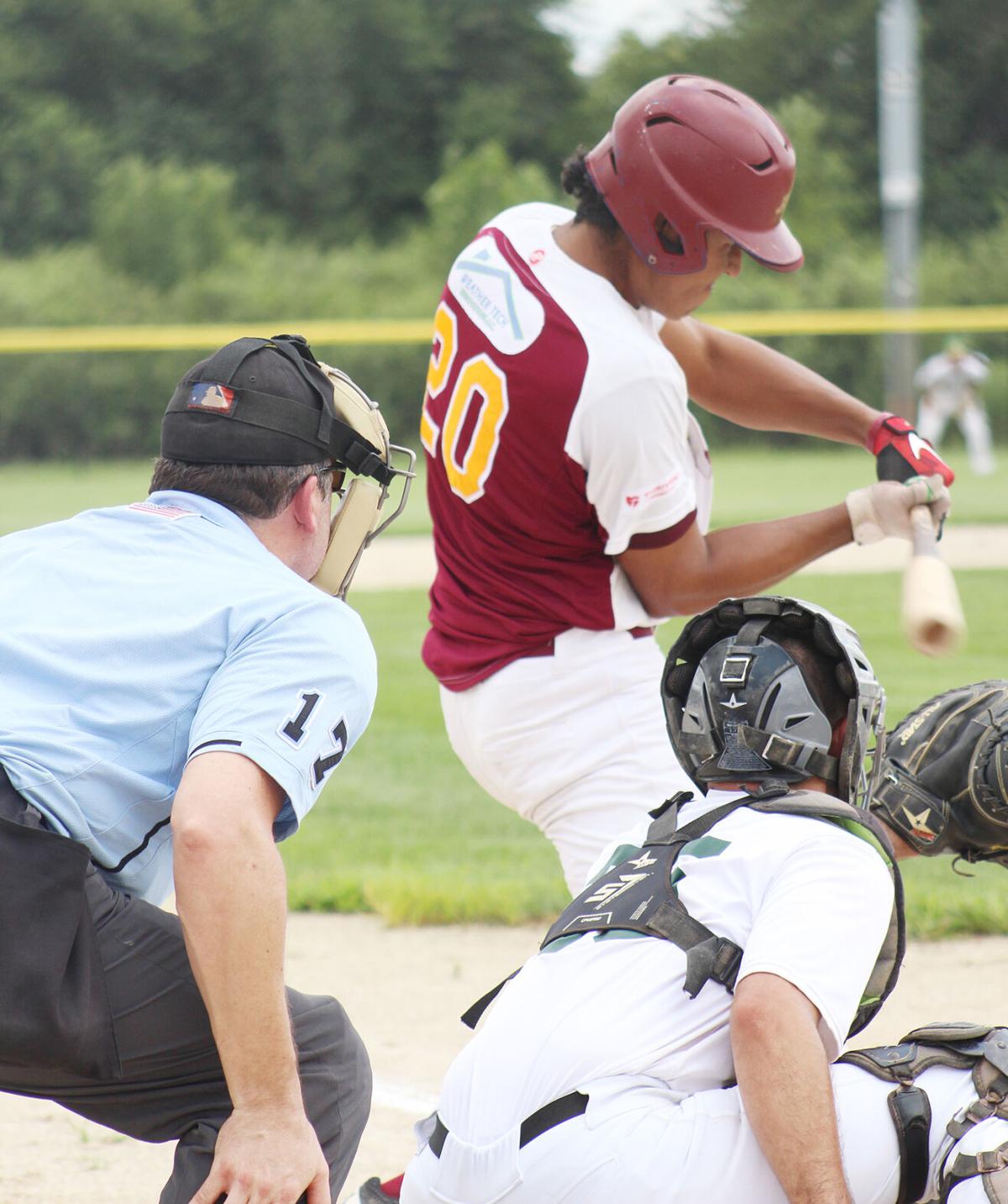 Bravos player Diego Oquendo takes a swing against Midwest A’s in the finals on Sunday at a Lee Summit field. 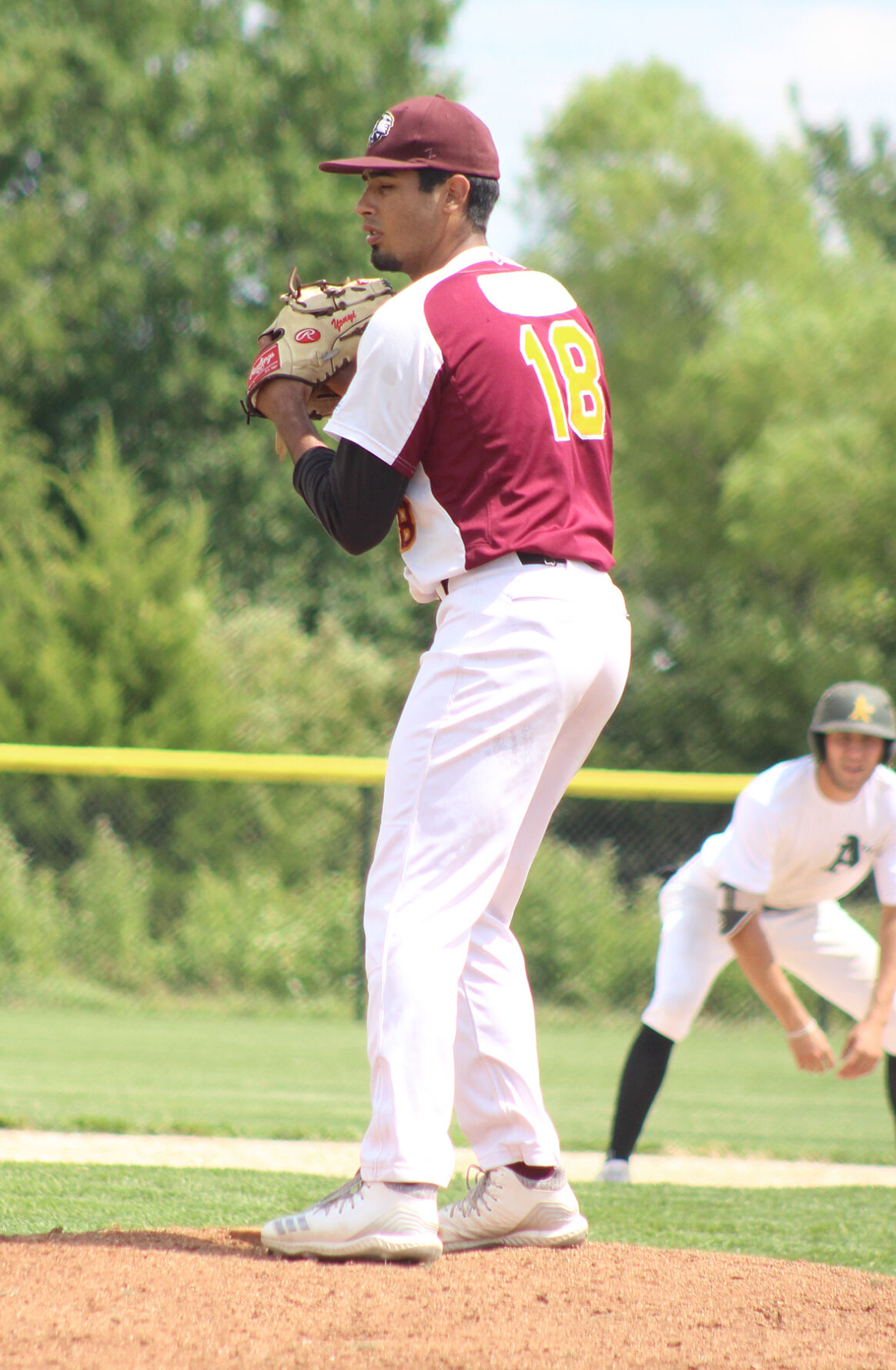 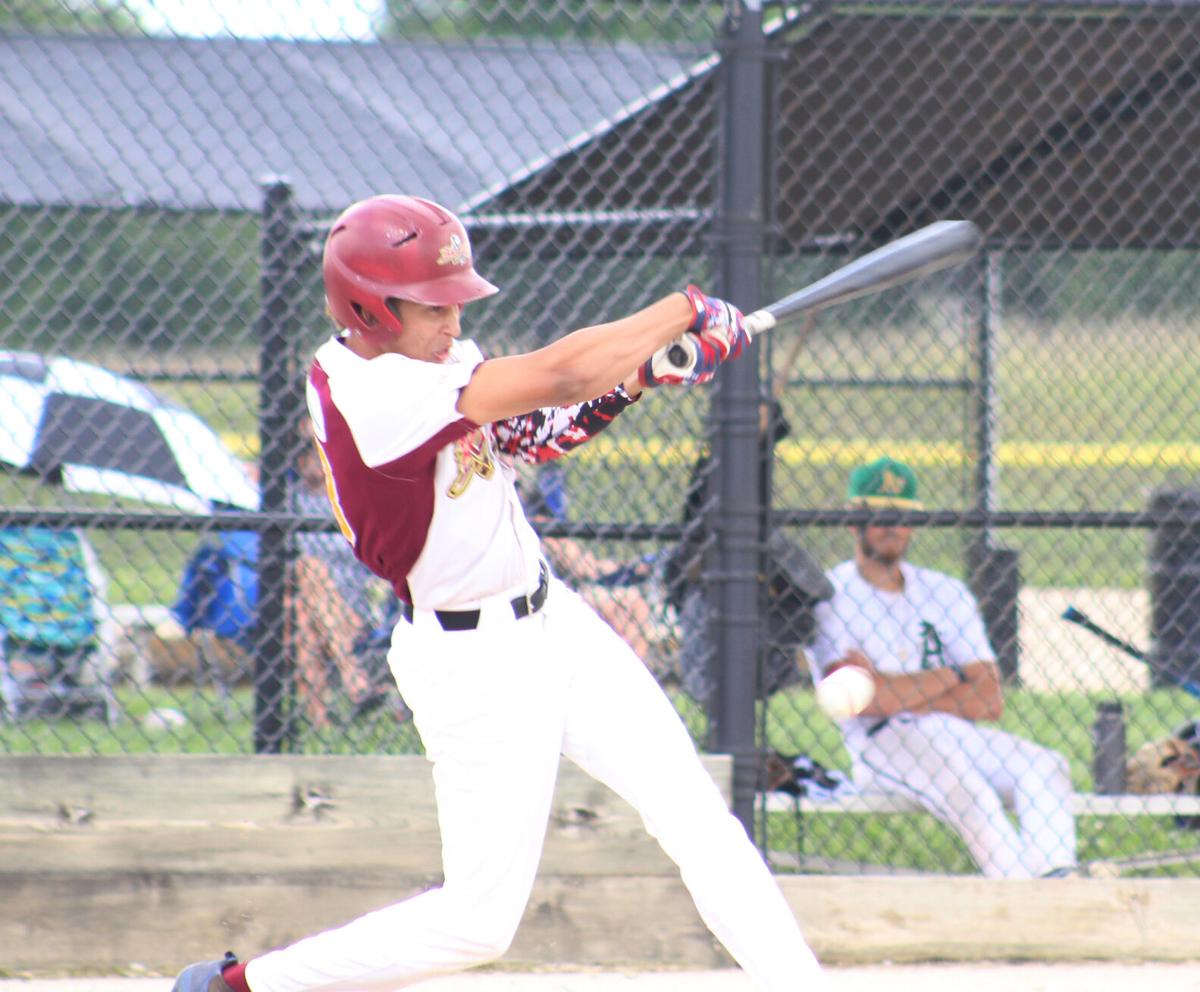 The Bravos team gathers before the game on Sunday.

Bravos pitcher Daniel Castillo reaches back to throw a pitch. In the background is Brandon Brewer, ready at third.

Bravos player Diego Oquendo takes a swing against Midwest A’s in the finals on Sunday at a Lee Summit field.

Maybe it was the rain, maybe it was a red-hot Midwest A’s team, but a short-handed Sabetha Bravos team, who had been on a barn-burning stretch of dominance in recent weeks, saw their momentum come to an abrupt end over the weekend in the MidPlains League Championship, known as the Cowdin Cup.

Down six players and four regular starters who had to return home before the series thanks the to the rain delay, the Bravos fought hard but could not get past the A’s to win the title.

The Bravos dominated the Topeka Golden Giants last week to earn their spot in the finale, and held a 4-3 advantage over the A’s heading into the weekend set for all the marbles. But after a rainout pushed the games back to the weekend, Sabetha could not get their bats going and the A’s gave the Bravos their best shot to sweep the series and claim the title.

Midwest did not need a big inning on Friday night, instead using constant pressure on the Bravos’ pitching staff, scoring a run apiece in the first, second, fifth and seventh, and adding 3 in the sixth. Sabetha could not crack the scoreboard until the seventh, already down by 6, throwing a single run up for the inning and for the game, as the A’s took the 7-1 win.

Bryant Waltemath led the offense, going 2-3 on the day with 1 RBI, while Nelson Vera scored the team’s lone run on a 1-3 day. Vera and Waltemath each collected a double on the day, as well. On the mound, the Bravos threw five pitchers, but most of the damage was done against starter Diego Oquendo, who went 5.1 innings, giving up 6 runs on 7 hits. Juan Santelises, Juan Luis Benjamin, Alberto Lopez and Joel Valerio teamed up to finish off the game, surrendering a single run and 4 hits combined.

The Bravos got on the board first in Sunday’s matchup in Sabetha, as Brandon Brewer and Gustavo Rivera both scored when Diego Oquendo grounded into an error by the second baseman with the bases loaded, to go up 2-0 in the bottom of the fourth. That was the extent of the team’s scoring, however, and the A’s were just getting started, scoring in each of the next four innings to win 5-2.

Santelises paced the offense with a 2-3 day, with a double and a walk, while Alejandro Pina pitched in with a 2-4 day. Daniel Castillo started the game on the bump for the Bravos, throwing 5.2 innings and giving up 3 runs on 6 hits with 5 strikeouts. Castillo was backed up by Sebastian Rodriguez, who came on in relief and threw 3.1 innings, giving up 2 runs on 5 hits and striking out 2.

The loss in the season’s final series leaves Sabetha with a 16-11 record on the season with hopes to avenge their championship loss in the 2021 season.

Inside the Aaron Rodgers-Davante Adams connection: ‘He’s an open book, and same with me’