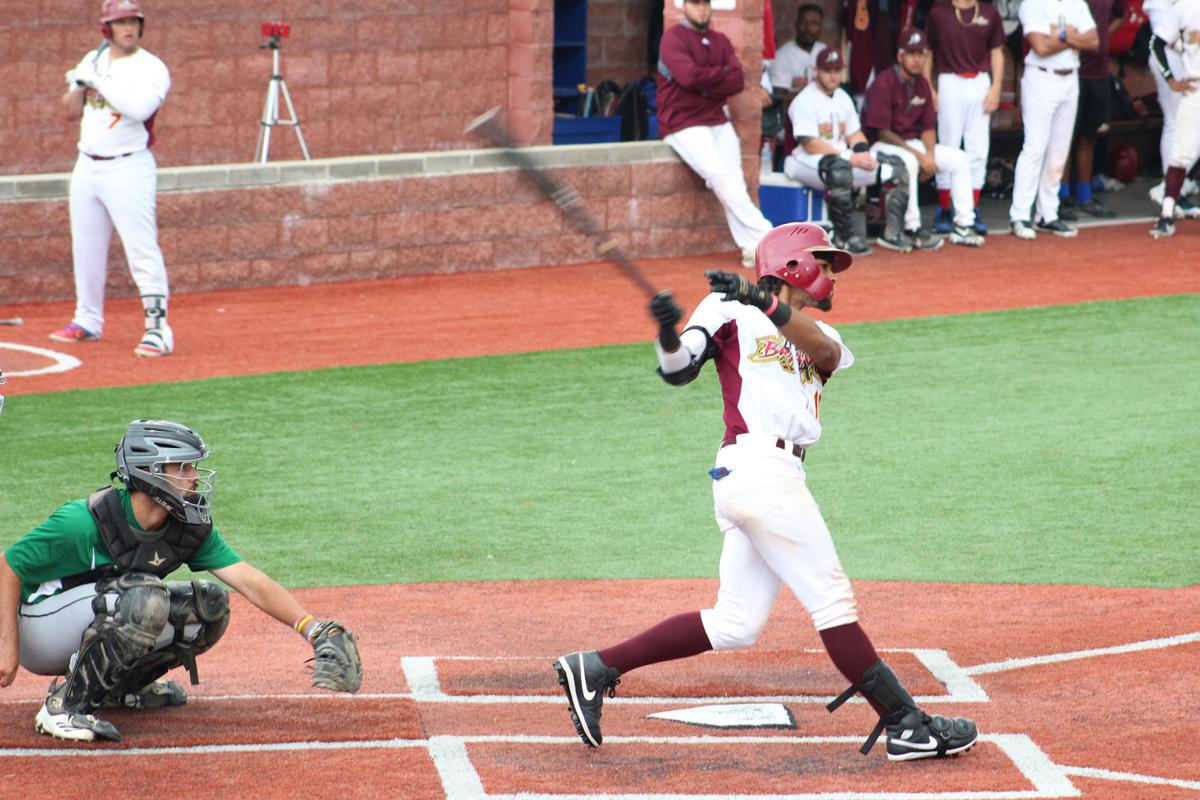 Raymond Guerrero swings for the fence and brings in a home run. Guerrero was named the Mid Plains League Player of the Week for last week. 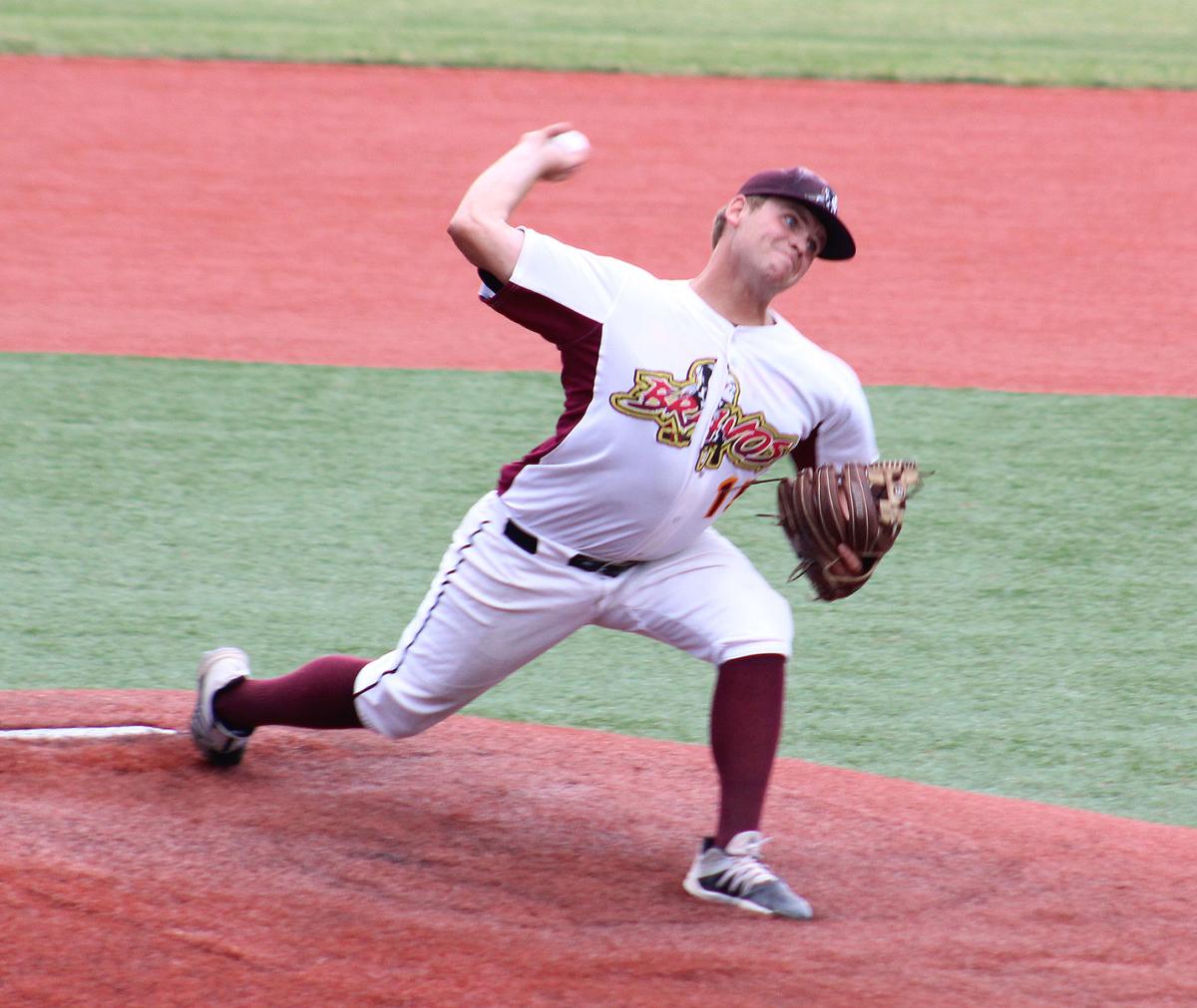 Seneca’s Austin Gerety reaches back to throw a pitch in a home game for the Bravos last week. 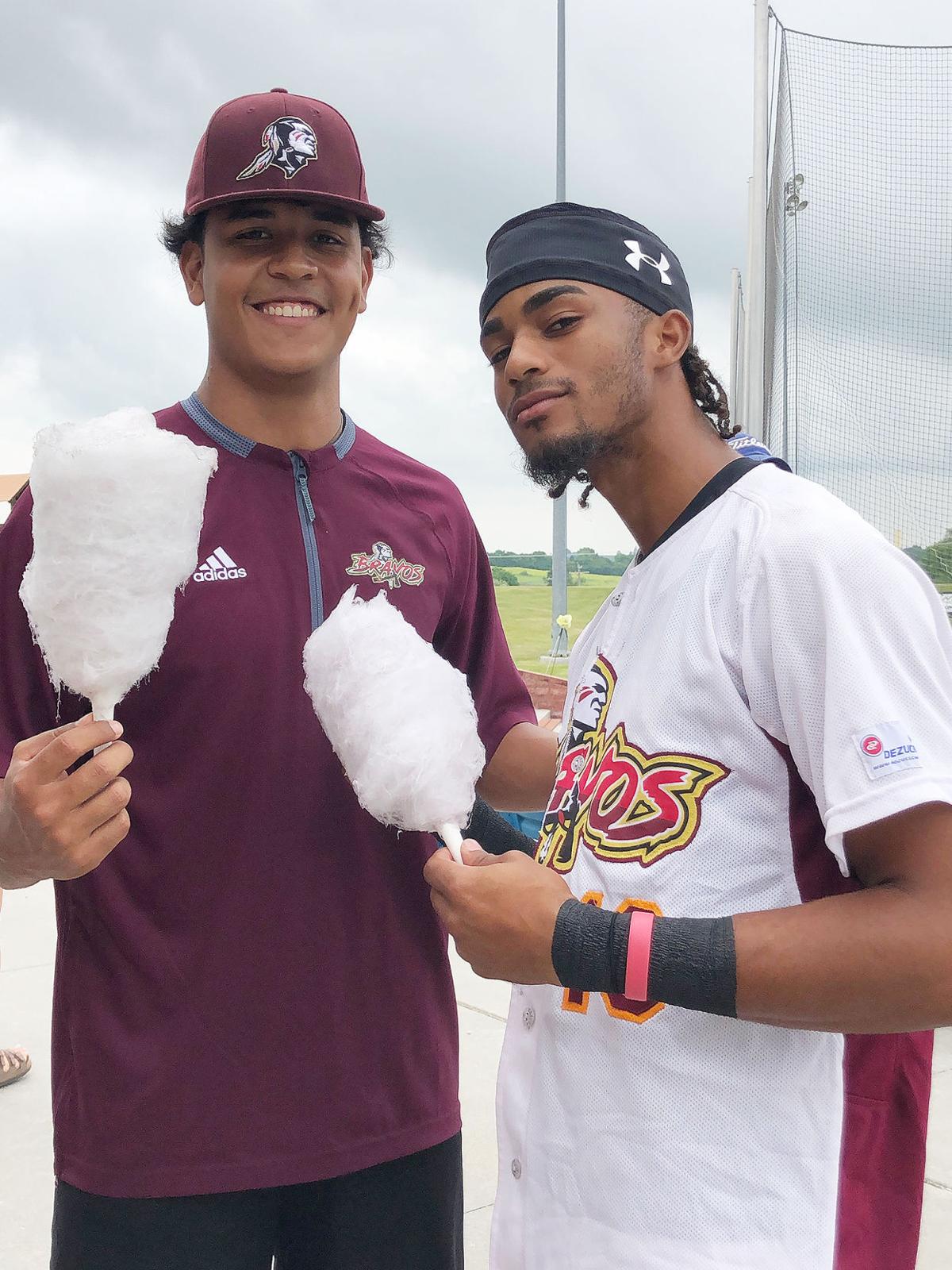 The Bravos players — Diego Oquendo at left with Raymond Guerrero — grabbed some cotton candy, sponsored by Shirt Shack and Apparel of Hiawatha, before Friday’s game. 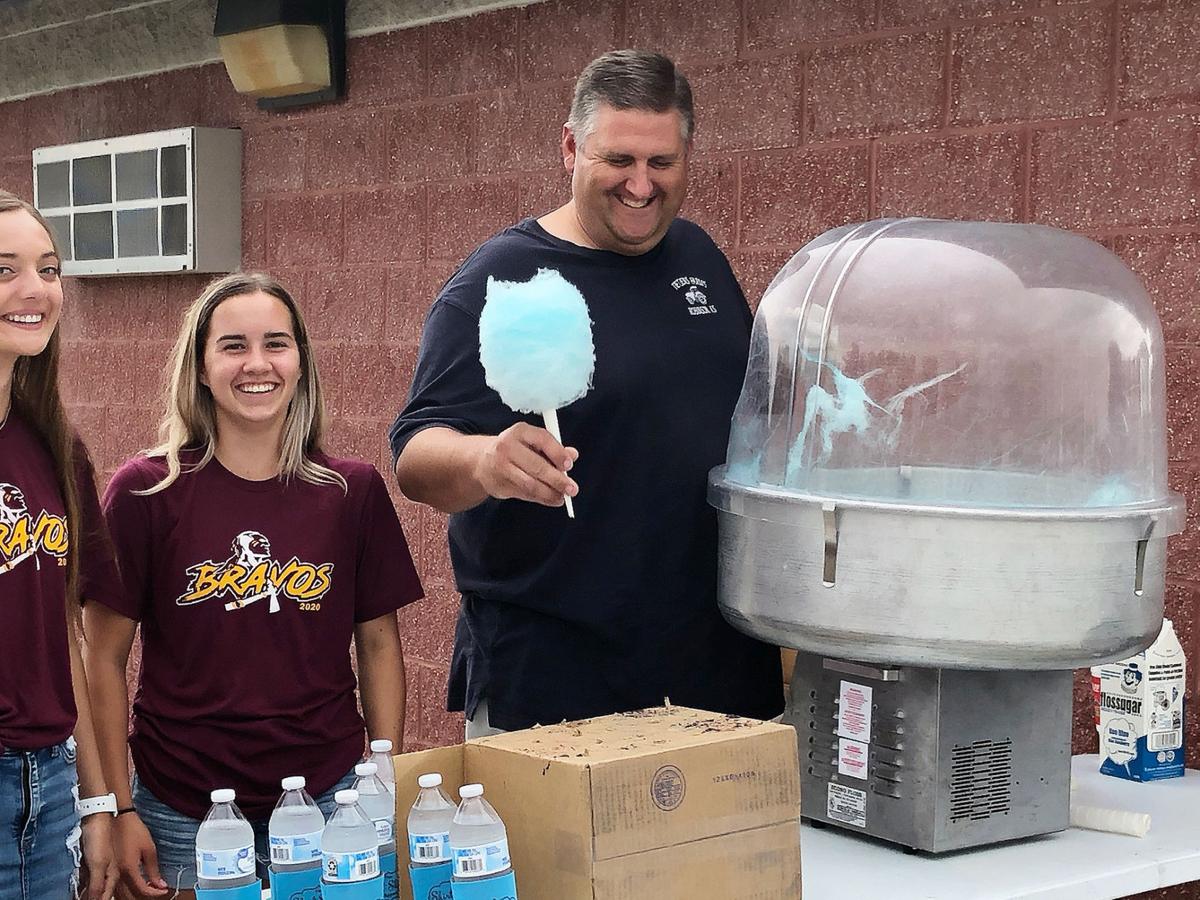 Raymond Guerrero swings for the fence and brings in a home run. Guerrero was named the Mid Plains League Player of the Week for last week.

Seneca’s Austin Gerety reaches back to throw a pitch in a home game for the Bravos last week.

The Bravos players — Diego Oquendo at left with Raymond Guerrero — grabbed some cotton candy, sponsored by Shirt Shack and Apparel of Hiawatha, before Friday’s game.

Following last week’s 1-1 start to the season, the Bravos baseball team pushed their season mark to 2-3 over the past week, dropping a game against Topeka, taking a win against the Midwest A’s and dropping one to the KC Monarchs.

The Bravos hosted the Topeka Golden Giants on Thursday and despite putting together a strong game, absorbed a 6-5 loss at the hands of the league leaders. Sabetha scored first, going up 2-0 in the bottom of the first inning, but gave one run back on a sacrifice fly in the second. Topeka tied things up in the third on a homerun, but Raymond Guerroro, who would earn League Player of the Week, tripled in the bottom of the inning, sending Ivan Medina and Luis Atiles home.

The next batter, Nelson Vera grounded into a fielder’s choice situation, with Guerrero sprinting home for the score and the 5-2 lead. Topeka narrowed the margin, scoring again in the fourth on a wild pitch, but it was the sixth inning that proved fatal for the Bravos. The Golden Giants tied things up after a steal of home and an RBI single, then took the decisive run on an error at the plate. Neither squad could break through the rest of the game as the Bravos took the loss. Medina went 3-4 in the game, scoring twice, while Atiles was 2-3 and Guerrero knocked in 2 RBIs. Jayron Arias and Austin Gerety split the action on the mound, with each striking out 2 and Gerety giving up 4 earned runs.

The Bravos kept things close in the early going the following night, as the team hosted the Midwest A’s, but exploded late in the game to earn the blowout victory. Vera smacked a homerun to right field to open scoring in the bottom of the second inning, and after the A’s grabbed one run on an error and another on a RBI single in the fourth, it was Guerrero smashing a dinger of his own to tie things up in the bottom of the fourth. Brandon Brewer scored on a Manuel Luna walk to open things up in the bottom of the fifth, which was followed by a bases-loaded double by Wilfredo Aguilar, sending Luna, Jose Guillermo and Gustavo Rivera home for the 6-2 lead.

The Bravos were hot again in the sixth, as Alejandro Pina sacrificed in Guerrero, Vera scored on a passed ball and then Brewer and Guillermo both scored on wild pitches to go up 10-2. Guerrero scored on a wild pitch in the seventh inning and Vera scored on an error to wrap up the game’s scoring. Daniel Castillo, Jacob Montero and Juan Santelises combined for the strong outing on the mound, while Guerrero led the team with a 3-4 performance, 3 runs scored, an RBI and a stolen base.

Things were looking for the Bravos in their Tuesday night game in Kansas City, but fell apart late as the Monarch’s posted a 10-run seventh inning to undo all of the Bravos’ hard work. Brewer scored on a Guillermo single in the second inning and Pina scored when Anthony Todaro reached base on an error on a hard ground ball to short. Luna jacked a homerun in the top of the seventh inning, and things were looking great for the Bravos before the wheels came off in the bottom of the inning. The Bravos ended up using six pitchers in the contest, most of them trying to get out of the seventh inning, as the Monarch’s blew up the game and pushed to the 10-3 win.

The Bravos squad will battle the Midwest A’s on Thursday night, then get the Topeka squad again for a doubleheader on Saturday. Local sponsor Aflac-Lady of NE Kansas DeeAnn Hinkle will be the sponsor for the evening with games, prizes, duck races and more. Games kick off at 4:30 p.m. at Somerset Park in Sabetha.

Greg Hansen: Pac-12 players' manifesto could prove to be start of needed overhaul