Sign Up
Log In
Purchase a Subscription
You are the owner of this article.
Edit Article Add New Article
You have permission to edit this article.
Edit
Home
eEdition
News
Schools
Sports
Obituaries
Opinion
Hometown
Special Sections
Multimedia
Marketplace
Celebrations
1 of 6 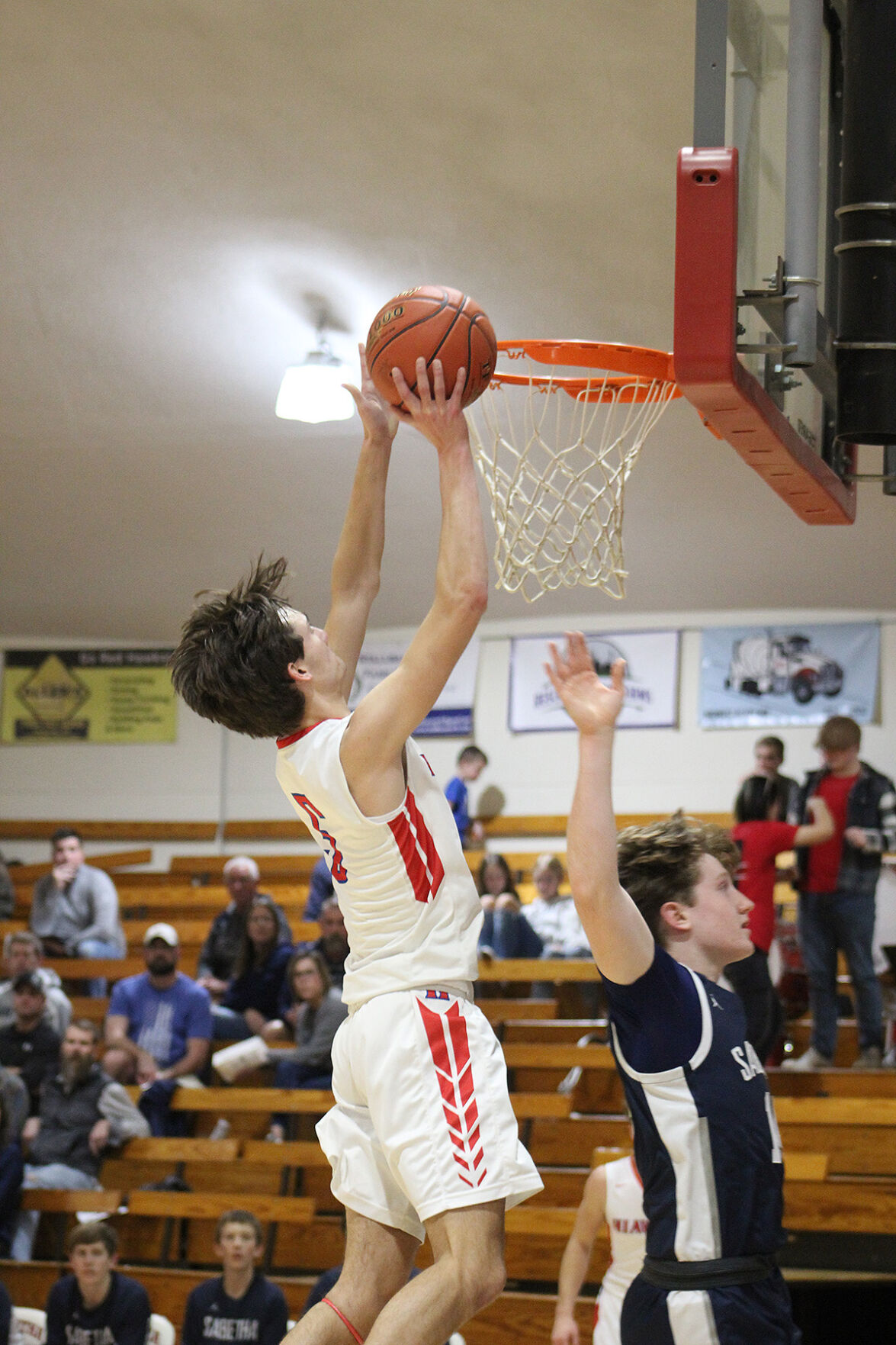 Hiawatha’s Carson Gilbert goes up for a basket in Tuesday’s game vs. Sabetha.

Students from Happy Days Preschool (front) have their hands over their hearts after leading the crowd in the Pledge of Allegiance while the HHS Headliners, directed by instructor Josh May, sing the National Anthem. 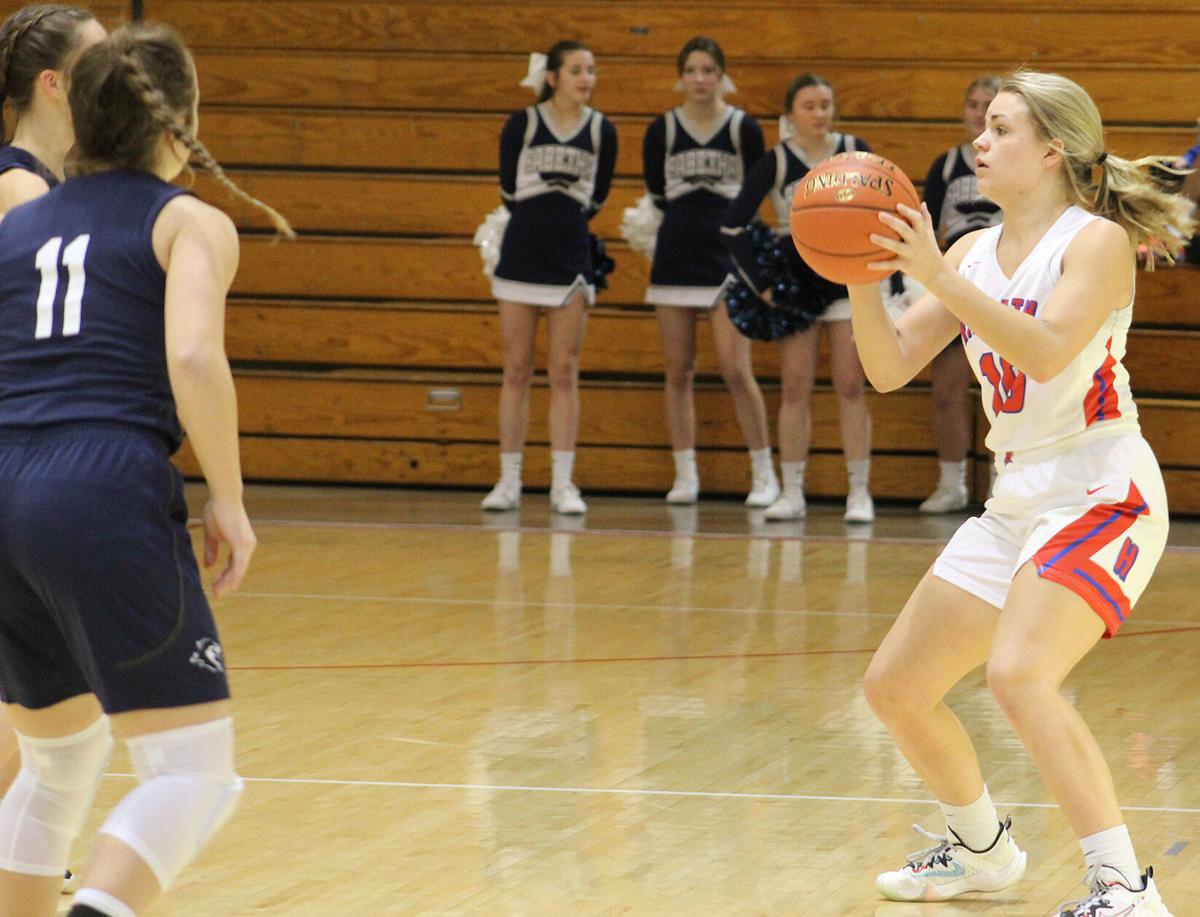 Hiawatha’s Clara Lindstrom looks for an open pass around a pair of Sabetha defenders. 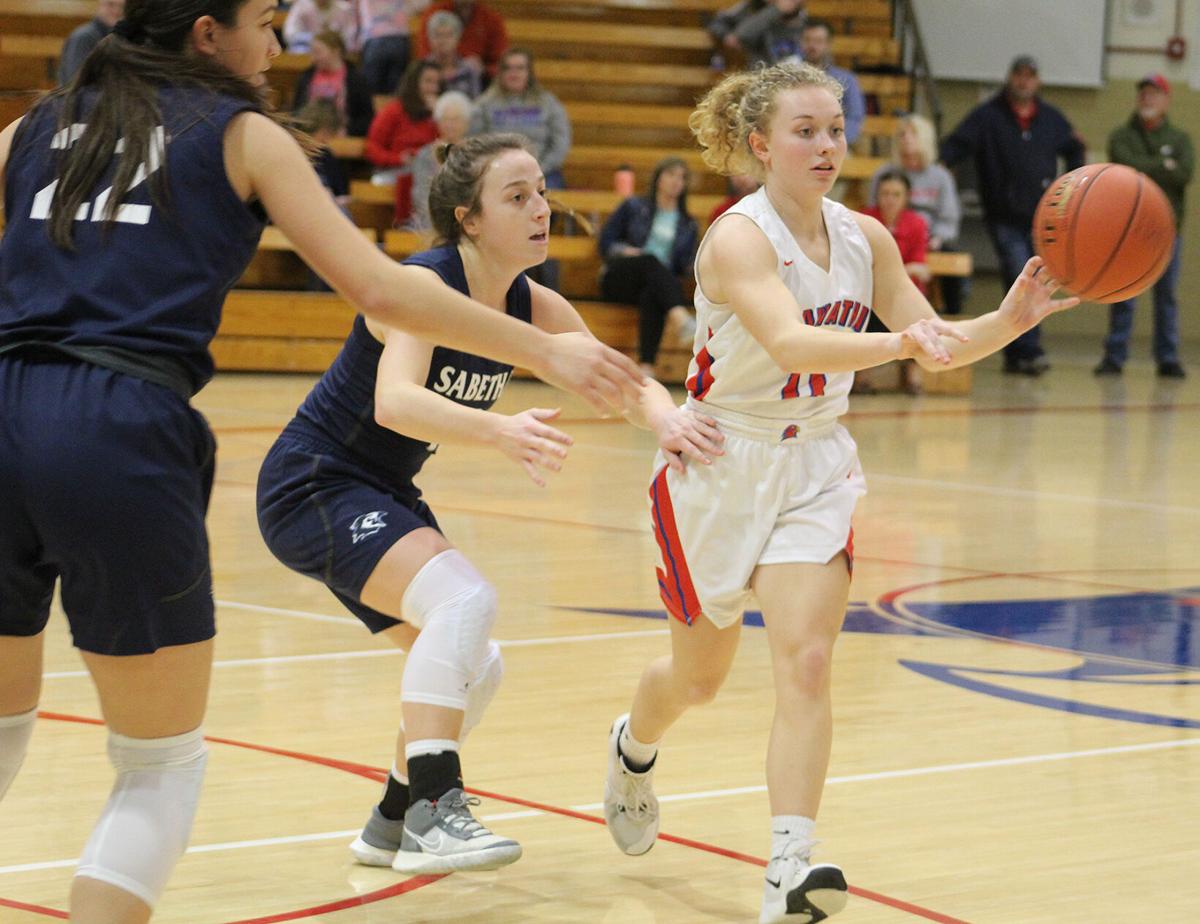 Hiawatha’s Josie Delaney drives around a pair of Sabetha defenders. 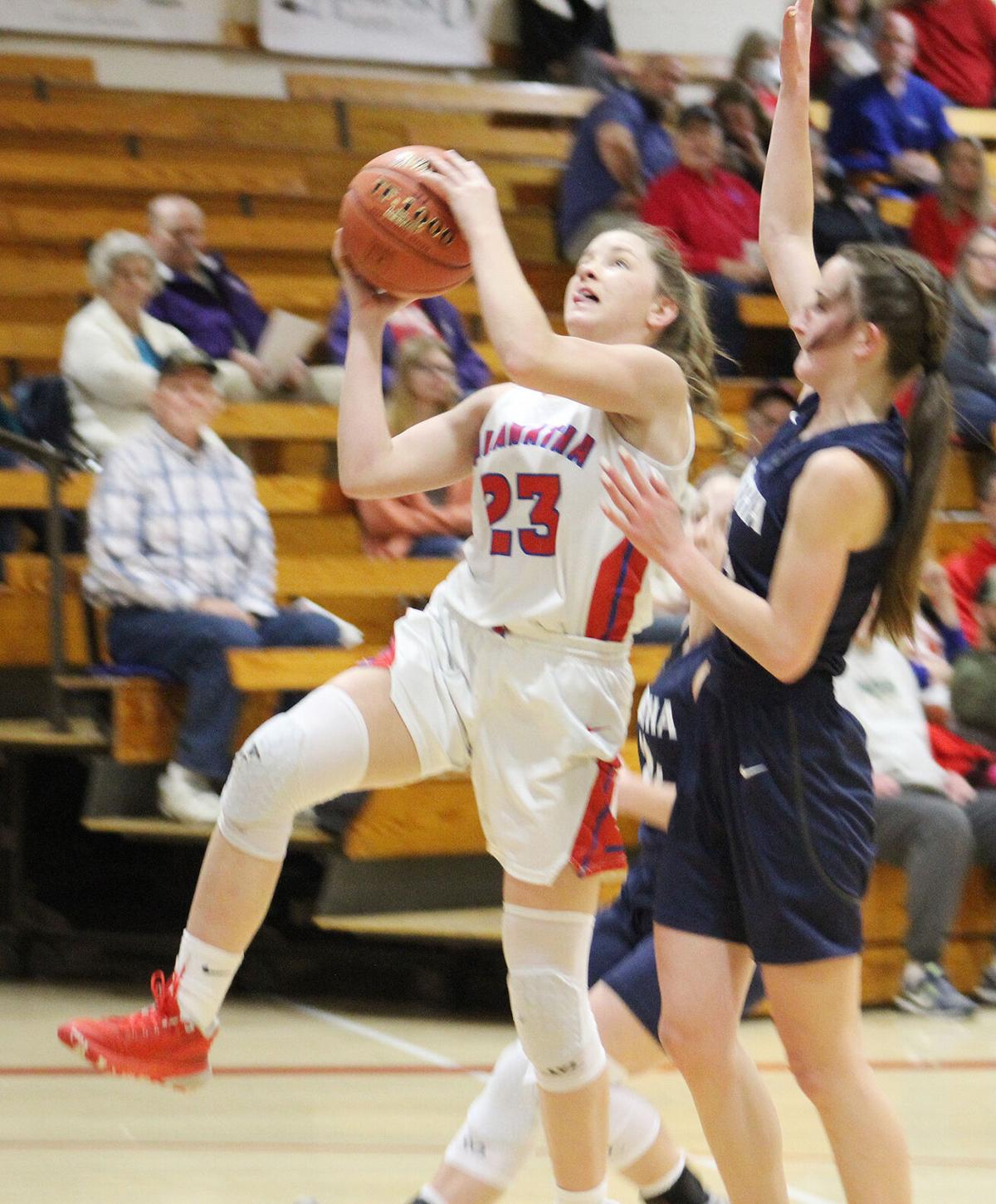 Darcy Lierz goes up for a layup against Sabetha. 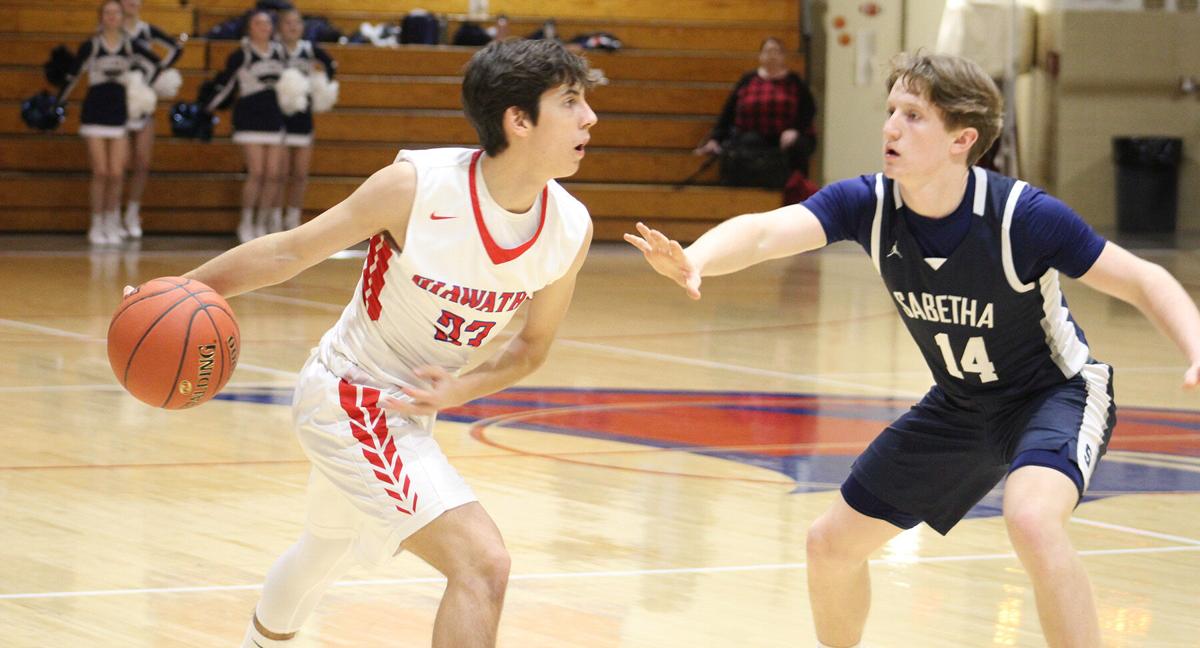 Hiawatha’s Carson Gilbert goes up for a basket in Tuesday’s game vs. Sabetha.

Students from Happy Days Preschool (front) have their hands over their hearts after leading the crowd in the Pledge of Allegiance while the HHS Headliners, directed by instructor Josh May, sing the National Anthem.

Hiawatha’s Clara Lindstrom looks for an open pass around a pair of Sabetha defenders.

Hiawatha’s Josie Delaney drives around a pair of Sabetha defenders.

Darcy Lierz goes up for a layup against Sabetha.

The Hiawatha Red Hawks hosted the Sabetha Bluejays on Tuesday night, and it was a quiet offensive night for both teams, as each squad saw their game slip out of grasp in the closing minutes.

Despite a slow offensive start, the Lady Red Hawks jumped out to a 9-6 lead after one quarter, but in the second, the Bluejays began to turn the tide. Sabetha entered the half up by a score of 21-25, as the Hiawatha offense struggled to gain any momentum. The Jays held strong in the early-going of the third quarter, stretching their lead to 19-33 before the Hawks began to pick up momentum. The deficit was cut to 33-24 by the break, and Hiawatha was able to get with in 2 points, at 33-35 by halfway through the fourth quarter. From there, the offense went silent again, as shot after shot just missed the mark. Sabetha was able to muster just enough to keep ahead of the Hawks as time ran down, and a pair of late free throws by the Jays put the game out of reach with seconds to go, finishing off the 41-37 win.

Clara Lindstrom led the team with 14 points, including 9 in the fourth quarter, while Darcy Lierz finished with 8, Abby Elffner added 6, with Sarah Madsen kicking in 5 and Bailey Pierce and Josey Delaney scoring 3 each. The loss moved Hiawatha’s record to 7-1, while Sabetha now sits at 4-4. The two teams will square off again in the final match up of the regular season. The Hawks will visit the 2-6 Royal Valley Panthers on Friday evening.

In the boys game, a competitive contest fell apart in the last half of the fourth quarter, as Sabetha pulled away for a 62-49 win. The Bluejays led Hiawatha by a score of 12-10 after a quarter, but Hiawatha pulled even by halftime, with Ashton Rockey knocking down 3 three-pointers in the half to power the Red Hawks. Hiawatha continued their climb in the third, as they pulled ahead by a score of 41-36 at the end of the third, and going up 45-38 minutes into the fourth. As the quarter moved on, Hiawatha scored a basket to go up 49-47 with just over four minutes to go in the game, but that was the last time the Red Hawks would scratch the scoreboard, as the Bluejays went on a 15-0 run to close out the game.

Carson Gilbert led Hiawatha with 18 points, followed by Joel Bryan at 13. Rockey checked in at 9 points for the game, with Brandt Barnhill scoring 6 and Mario Alcalde adding 3. Sitting at 4-4 on the season, the Red Hawks are on a crash course with the 8-0 Panthers of Royal Valley on Friday. They will follow that performance up as they compete in the Nemaha Central Invitational the following week.

Vets Folk, Gronk again led the way among ex-Wildcats, Tucsonans in the NFL