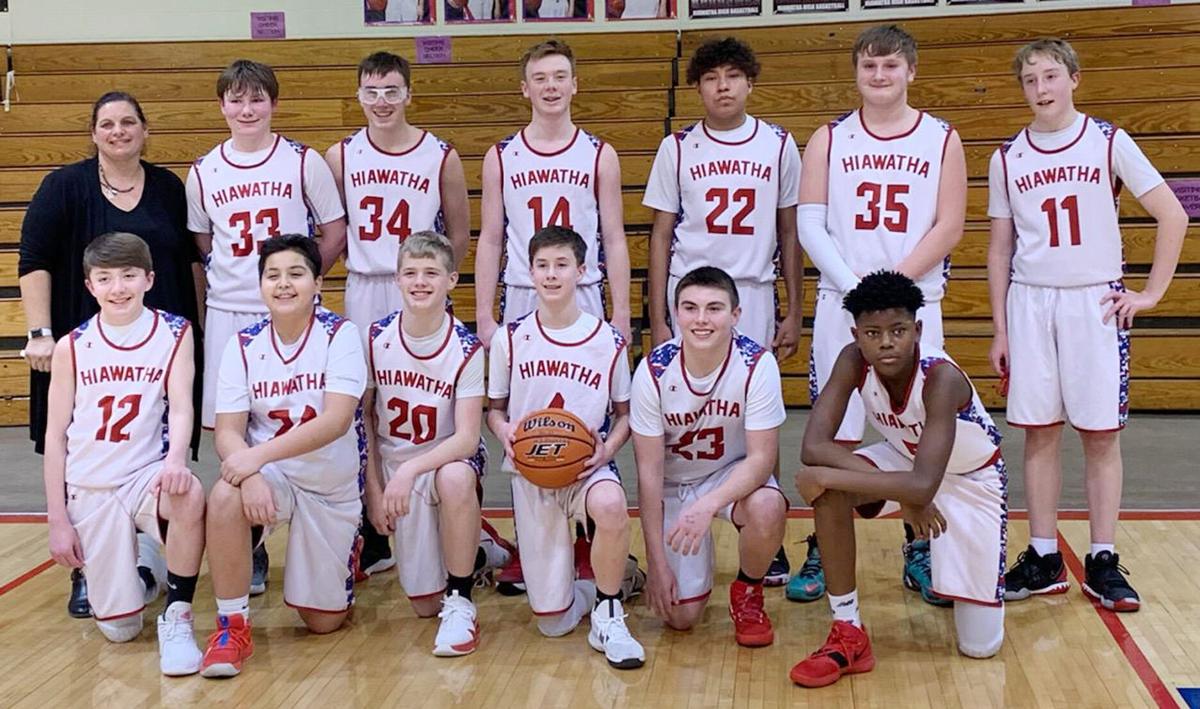 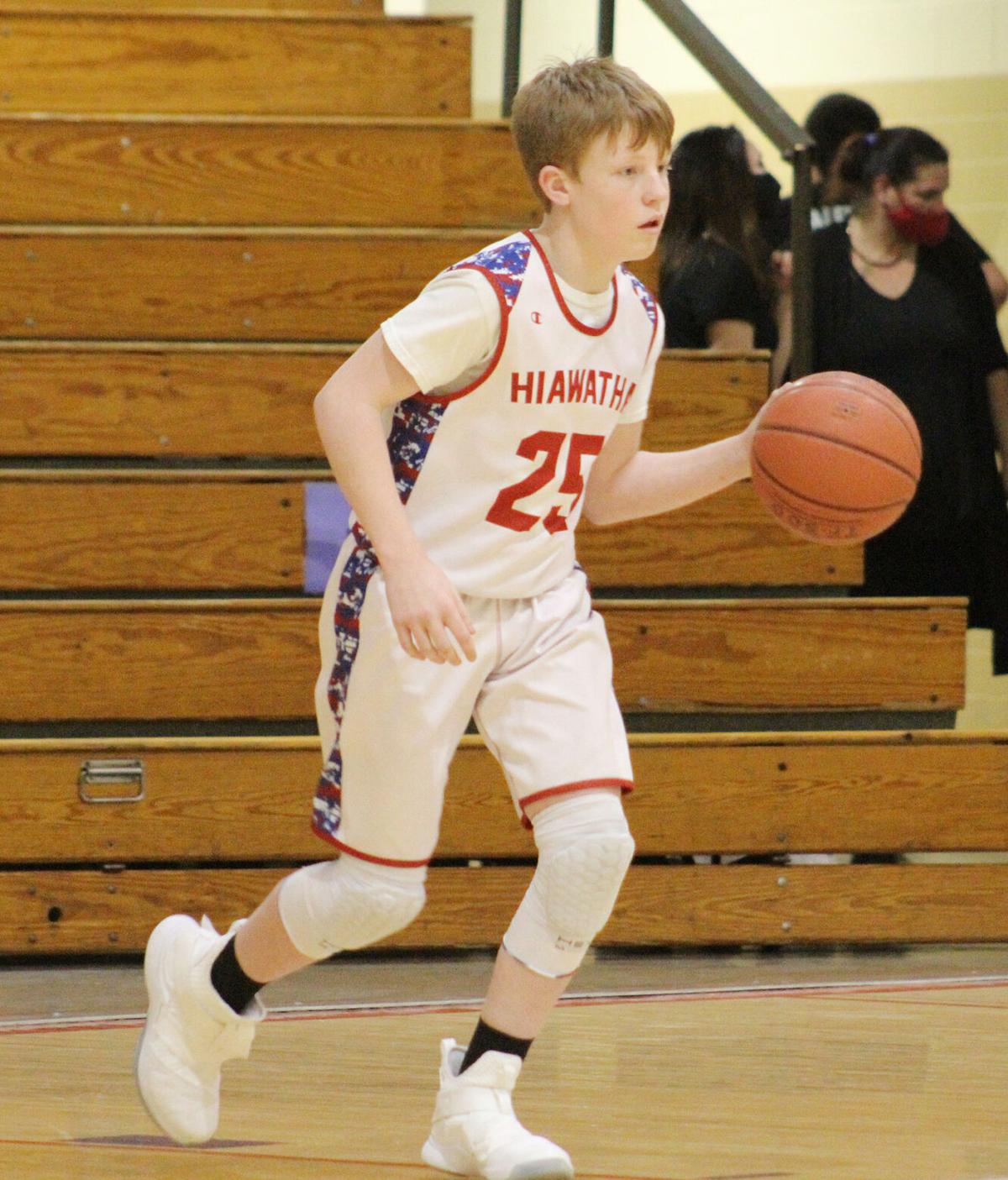 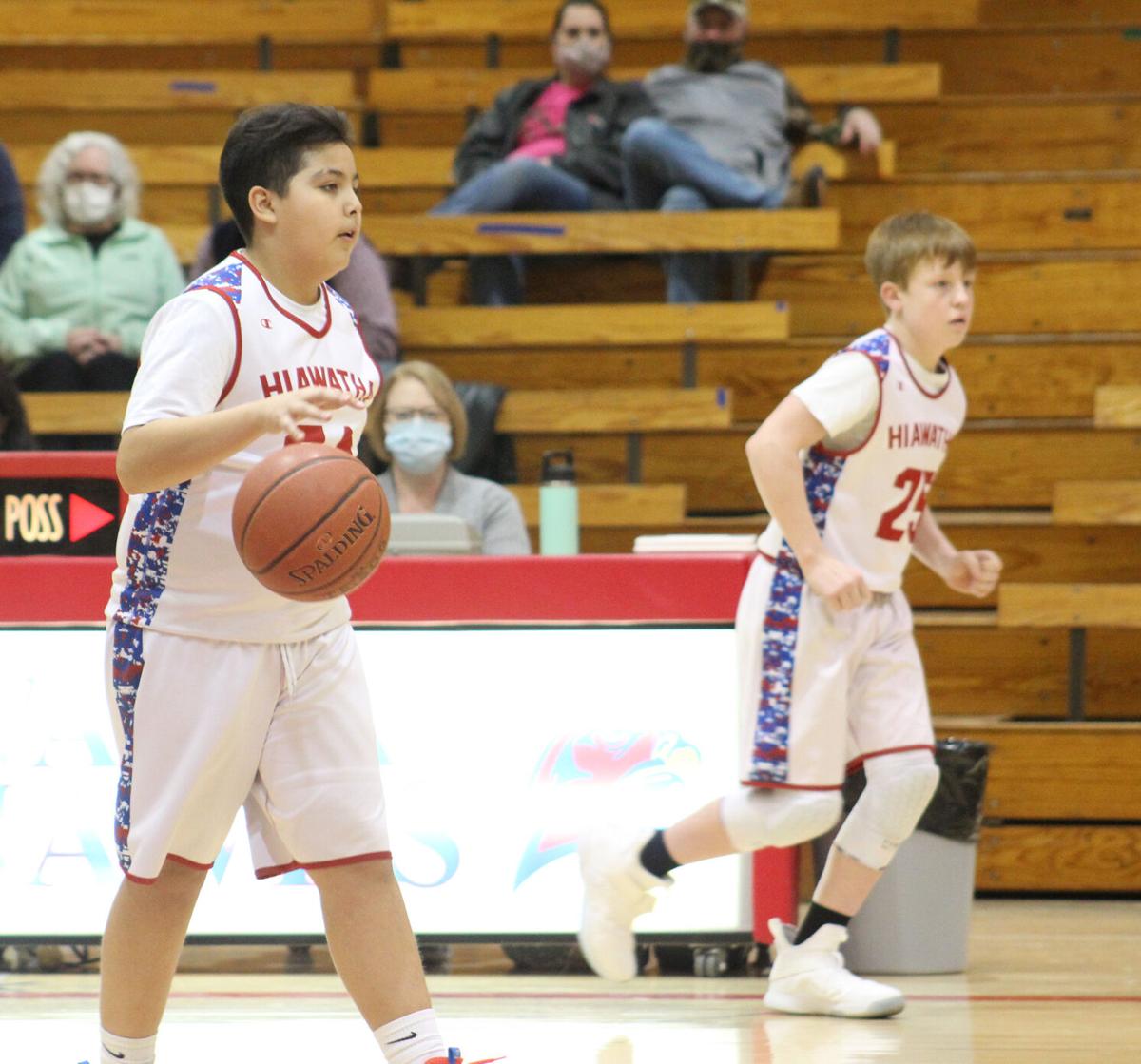 Jr. Wahwahsuck drives the ball up the court alongside teammate Blake Simpson. 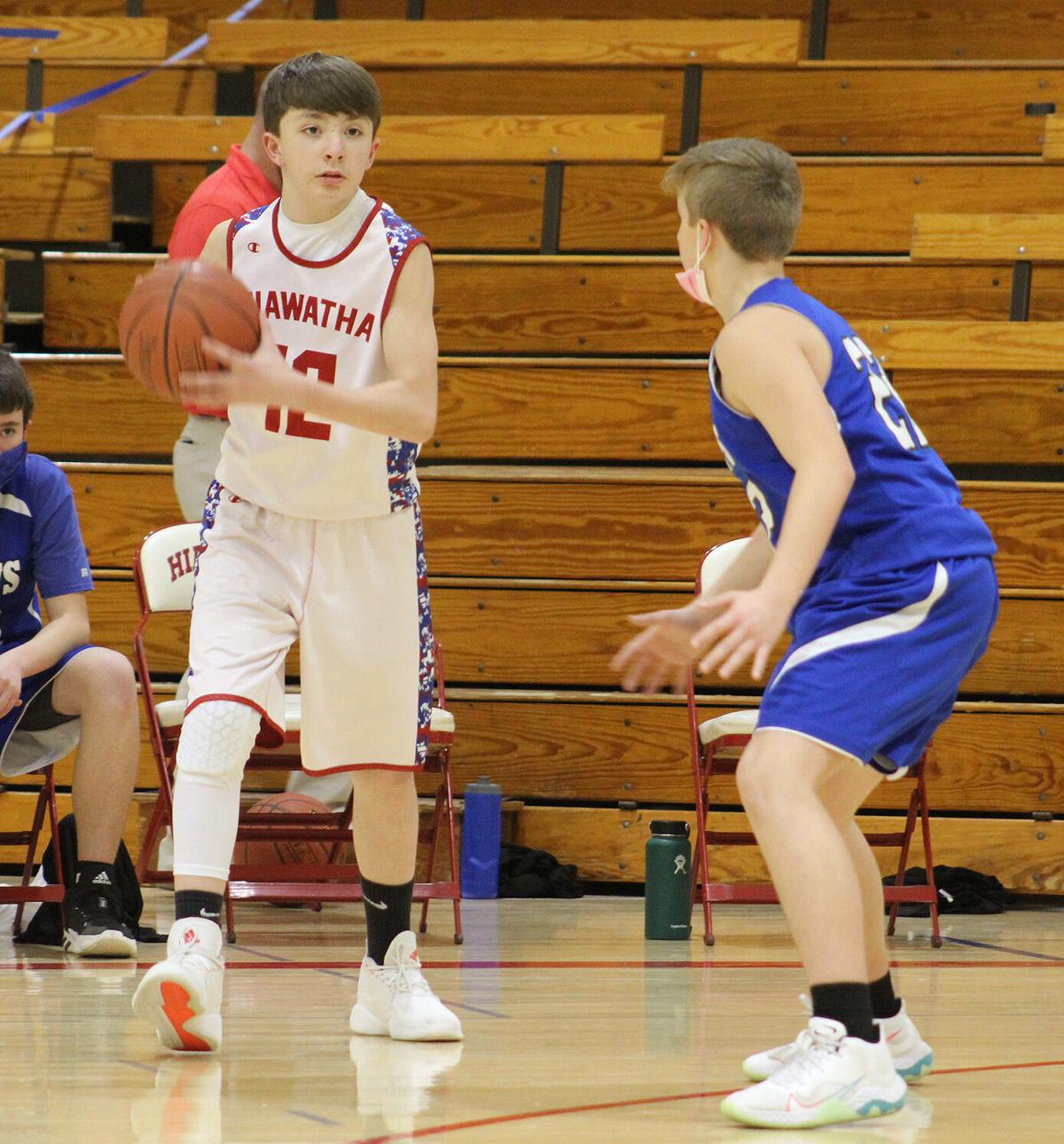 By Josephine May | Hiawatha World

Gage Cappleman passes the ball around a Perry defender. 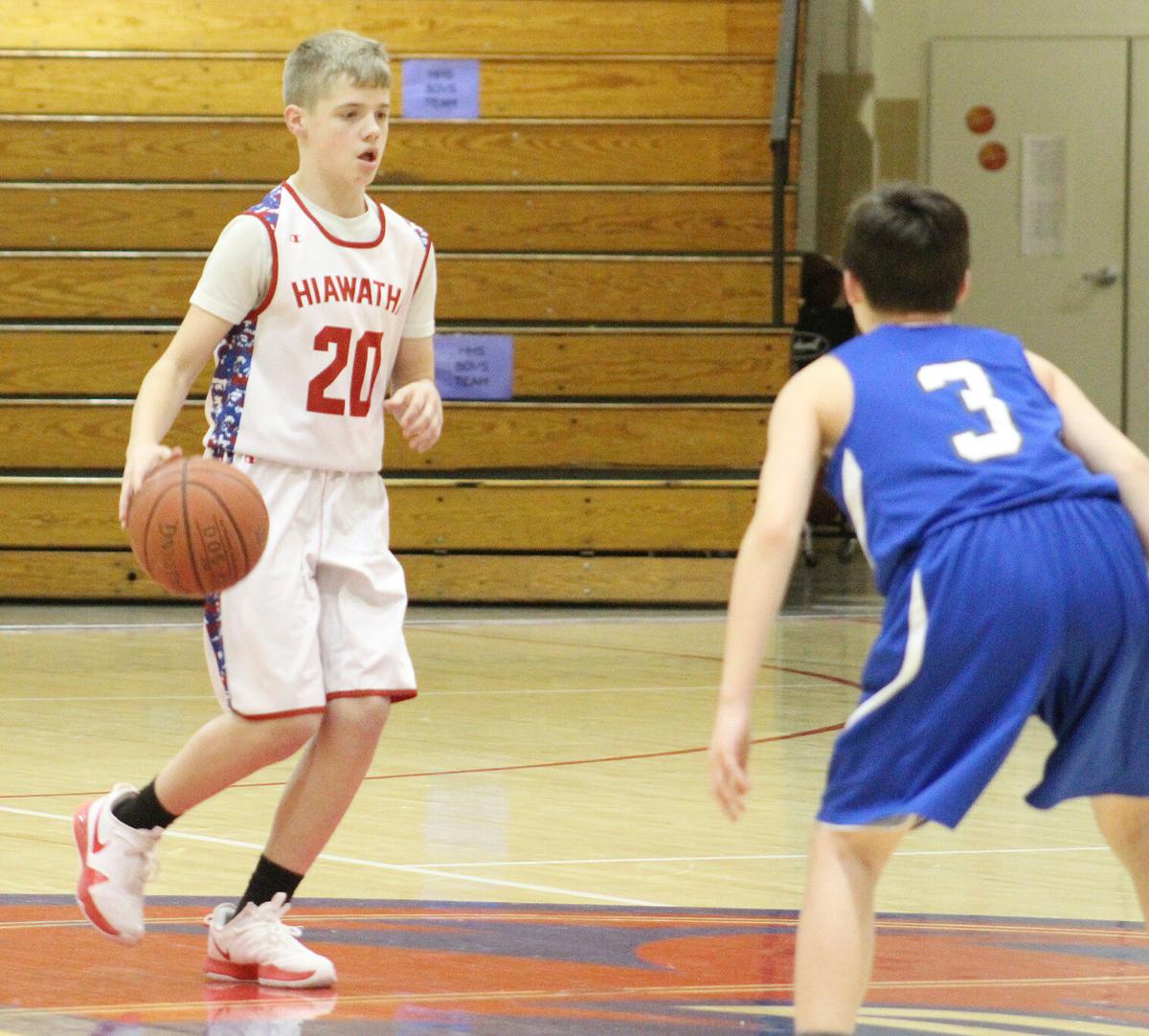 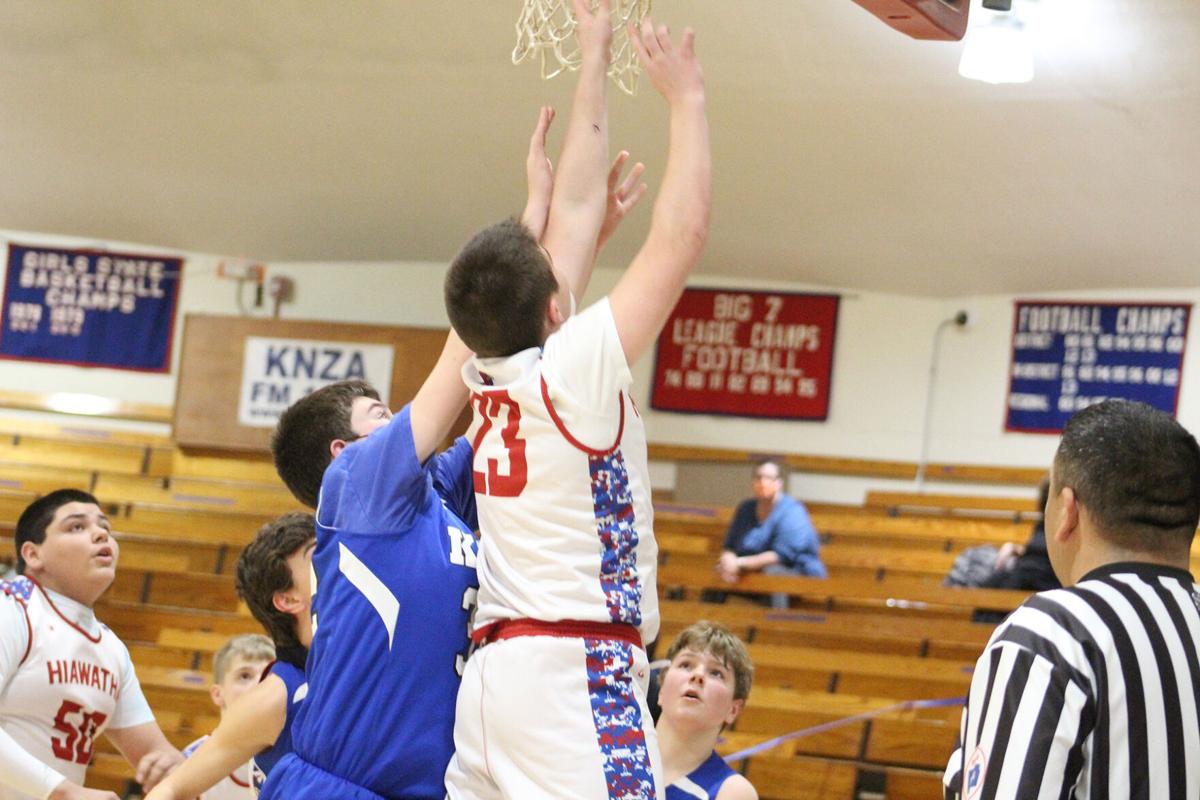 Matthew Monaghan goes up for a basket — also pictured is teammate Jose Valencia.

Jr. Wahwahsuck drives the ball up the court alongside teammate Blake Simpson.

By Josephine May | Hiawatha World

Gage Cappleman passes the ball around a Perry defender.

Matthew Monaghan goes up for a basket — also pictured is teammate Jose Valencia.

Coach Sherri Nelson went into Monday’s game with a 10-1 record and the only loss against Perry earlier in the season.

“With a win, we secure league champions, but with a loss we would drop to 3rd,” she said. “That was a lot of pressure for a middle school athlete. We had a plan. We had our last practice getting a plan to come out on tip against Perry. They had some players that we needed to be aware of and play a specific way to get the win. We also had to have composure and play a specific way to put ourselves in a place to grab that win.”

Nelson said the game was the most intense contest as a middle school coach that she has ever been a part of.

“The opposing coach, their fans, our fans, and even our little pep section was intense from start to finish,” she said. “The game was tied 14-14 at half. We are typically not a very good 3rd quarter team. So at half time we discussed how very important it was to make that quarter our very best of the night. Man they listened!! We outscored them 15-4 in the third quarter.”

Nelson said the B game was also very intense, but Hiawatha held on for a 39-32 win.

“There was a young man from Perry making some great shots keeping them in the game,” Nelson said. “Hiawatha kept up their great defense and their shots started to fall as well holding off Perry for the win.”

The eighth grade team played Jeff West on Thursday, holding on for a 37-34 victory.

“We put together 3 really strong quarters against Jeff West,” Nelson said. “The fourth quarter, however, was a rough one. Jeff West tried to put together a comeback, outscoring us 14-8 in the fourth.”

Sources: Plans in works for Nebraska to open 2022 season in Dublin, perhaps vs. Northwestern

With no competition, Bazelak is embracing role of second-year starter

Stories from the Heart: Donovan Wilson doesn't forget his hometown