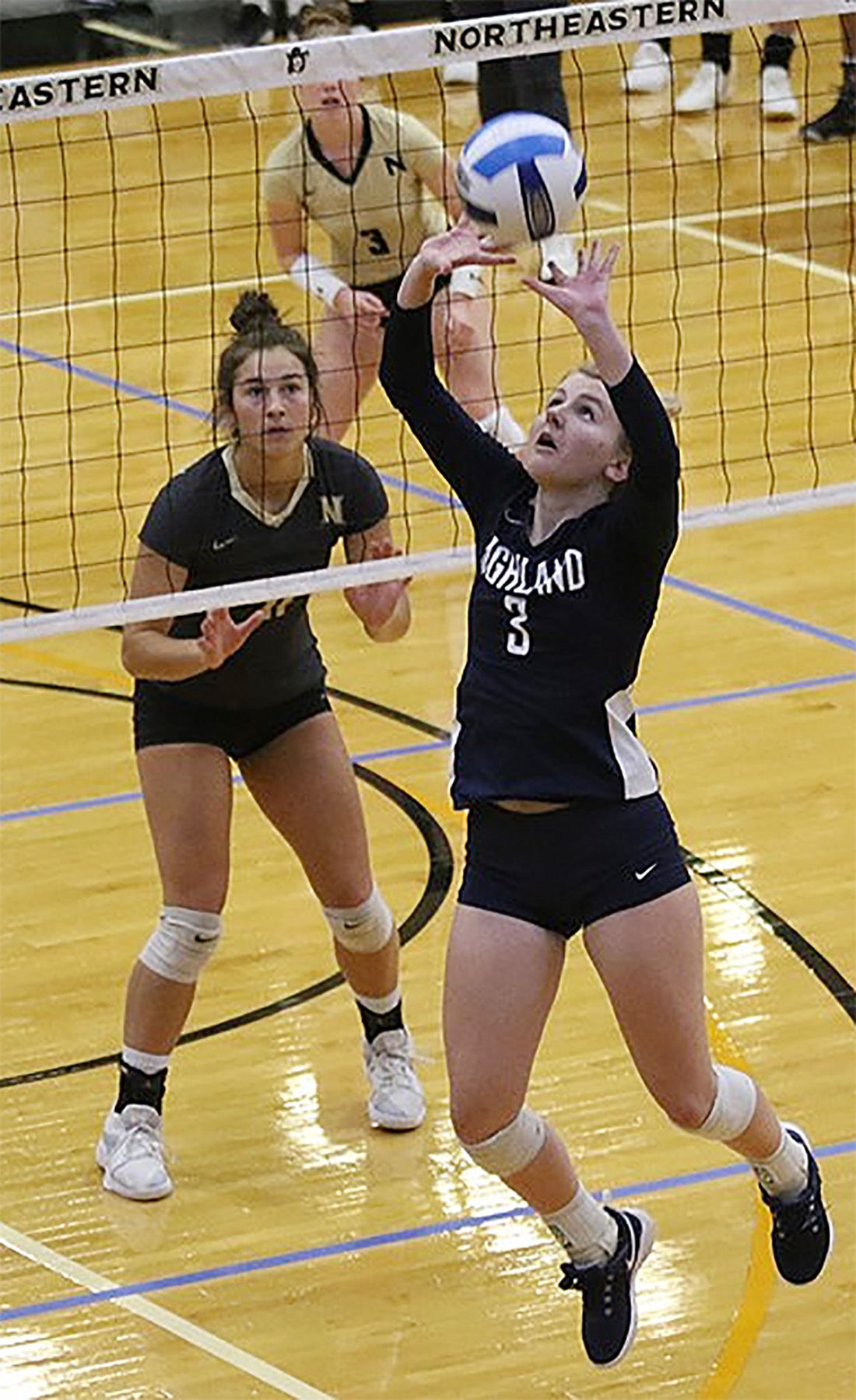 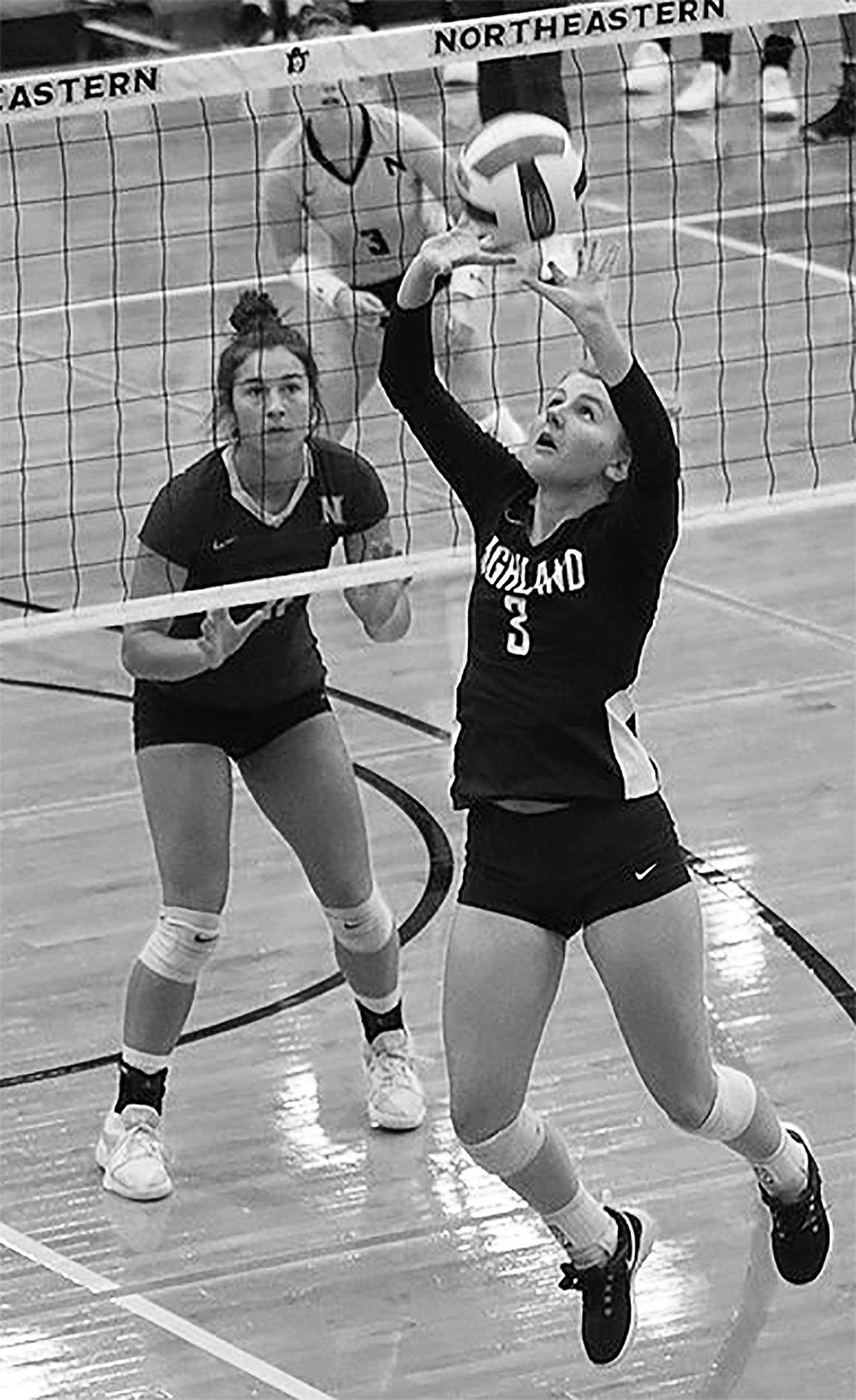 The Highland volleyball team has faced some high caliber opponents all season but over the weekend the Scotties competed at the DMACC Tournament and faced one of their toughest tasks of the season with the opponents that stood in front of them.

Scotties opened the DMACC Tournament by facing off against an unbeaten Rochester team that ranked #1 in NJCAA DIII and came away with a four set win. Highland fell behind in the match after a first set loss to Rochester 20-25, but the Scotties responded taking the next two sets 25-22 each and then snatching the fourth set 25-19 to earn the win.

Jessica Monroe had a career best 23 kills accounting for 39% of the teams kills in the match, while both Abby Williams and Cajia Allen tallied double digit kills also finishing with 15 and 12, respectively. Williams added six digs, while Allen had a double-double finishing with 15 digs and had three blocks. Kellyn Lipasek also recorded a double-double tallying 50 assists and 12 digs, while chipping in three kills. Amber Hildebrand and Brianda Diaz each tallied double figure digs with 15 and 10 apiece.

After strong win over Rochester the Scotties made it a 2-0 day on Friday at the DMACC Tournament by dispatching #14 Kirkwood in four sets. Scotties fell in a tight first set 21-25, but responded winning two tight sets in second and third sets 25-23 and 26-24. Highland finished off the match in dominate fashion cruising to a set four win 25-12 to take the match.

Scotties spread the wealth offensively in the win with a quartet of players tallying double figure kills including another double-double for Allen who posted 19 kills and 13 digs. Nicole Franco had her first career double-double with a career best 12 kills and added 12 digs. Monroe and Williams each recorded double figure kills with 12 and 11, while Hildebrand and Diaz once again tallied double digit digs each with 15 and 12. Lipasek surpassed 50 assists again with 51 and added 10 digs.

Highland faced off against the #1 team in NJCAA DII in their third match of the DMACC Tournament and while the Scotties gave Parkland a run for their money in the first set it was ultimately a three set loss for Highland in the showdown falling 22-25, 9-25, 13-25. Scotties did fight back multiple times in the first set to tight it up late but were unable to overcome different things in the matchup.

Looking to cap the tournament with a strong performance and looking for some revenge from an earlier season loss the Scotties rocked the tournament host DMACC beating them in three sets 25-16, 25-19, 25-18.

Monroe paced the Scotties on the offensive side with double figure kills again posting 11, while adding four digs. Hildebrand who stepped into the libero role at the tournament recorded 18 digs in the win, while Franco had double figure digs for the third straight match finishing with 10. Williams added nine kills and Allen tallied eight. Lipasek notched 30 assists and posted seven digs.

Highland continues their season on Friday, Oct. 11 when they travel to Concordia, Kansas and partake in the Cloud County Triangular facing Southeast at 5 pm and the host Cloud County at 7 pm in a non-conference matchup.