Sign Up
Log In
Purchase a Subscription
You are the owner of this article.
Edit Article Add New Article
You have permission to edit this article.
Edit
Home
eEdition
News
Schools
Sports
Obituaries
Opinion
Hometown
Special Sections
Multimedia
Classifieds
Celebrations
1 of 7 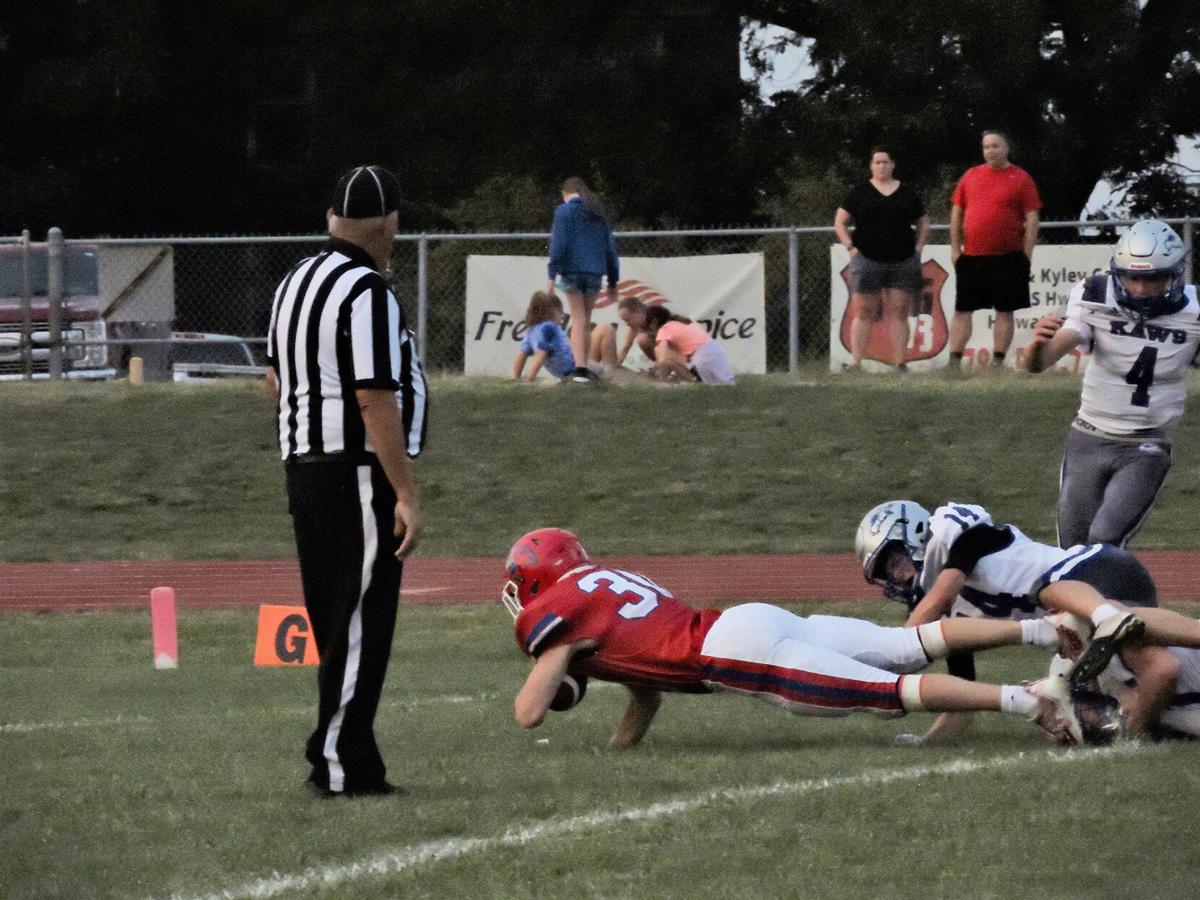 Tyler Davis dives for a first down in Friday’s home game against Perry-Lecompton. 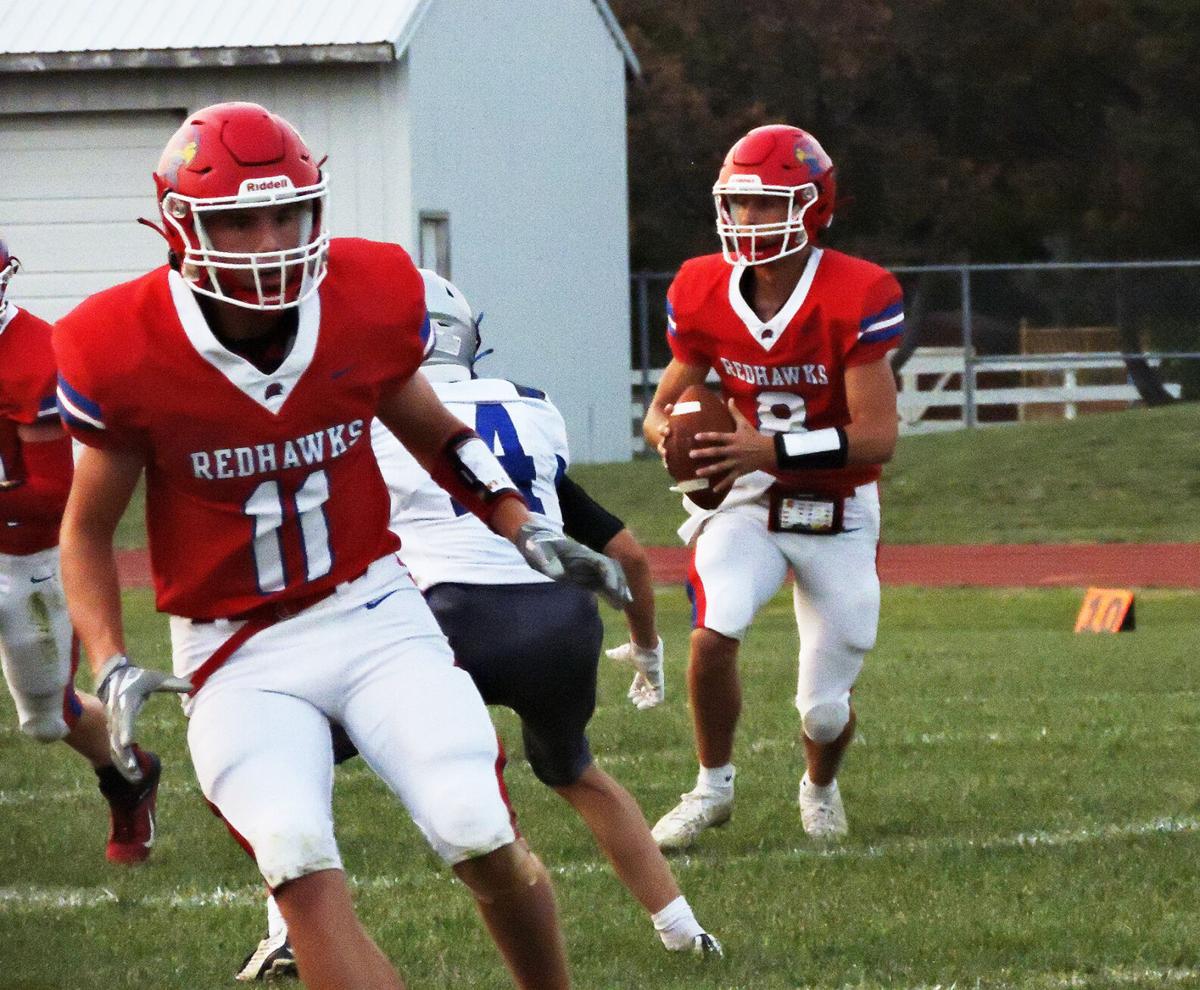 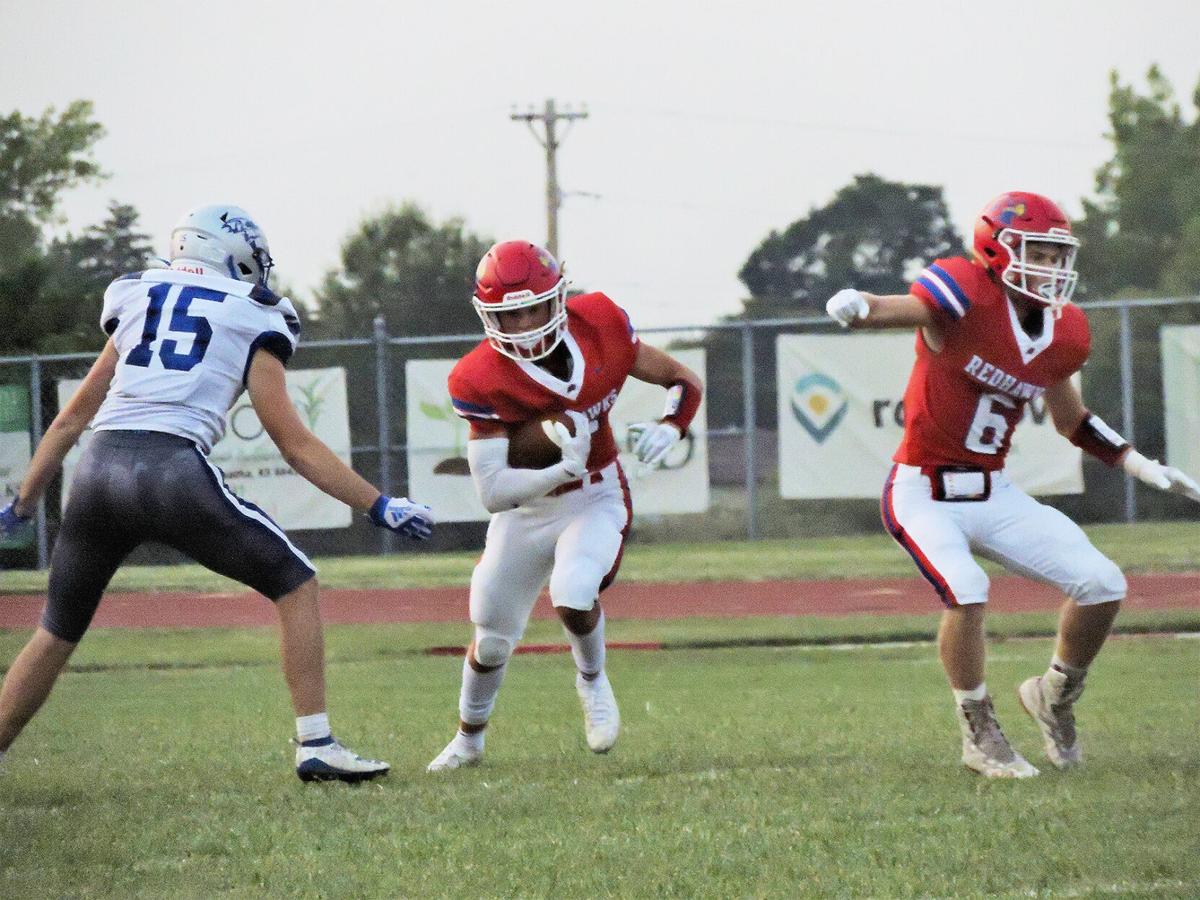 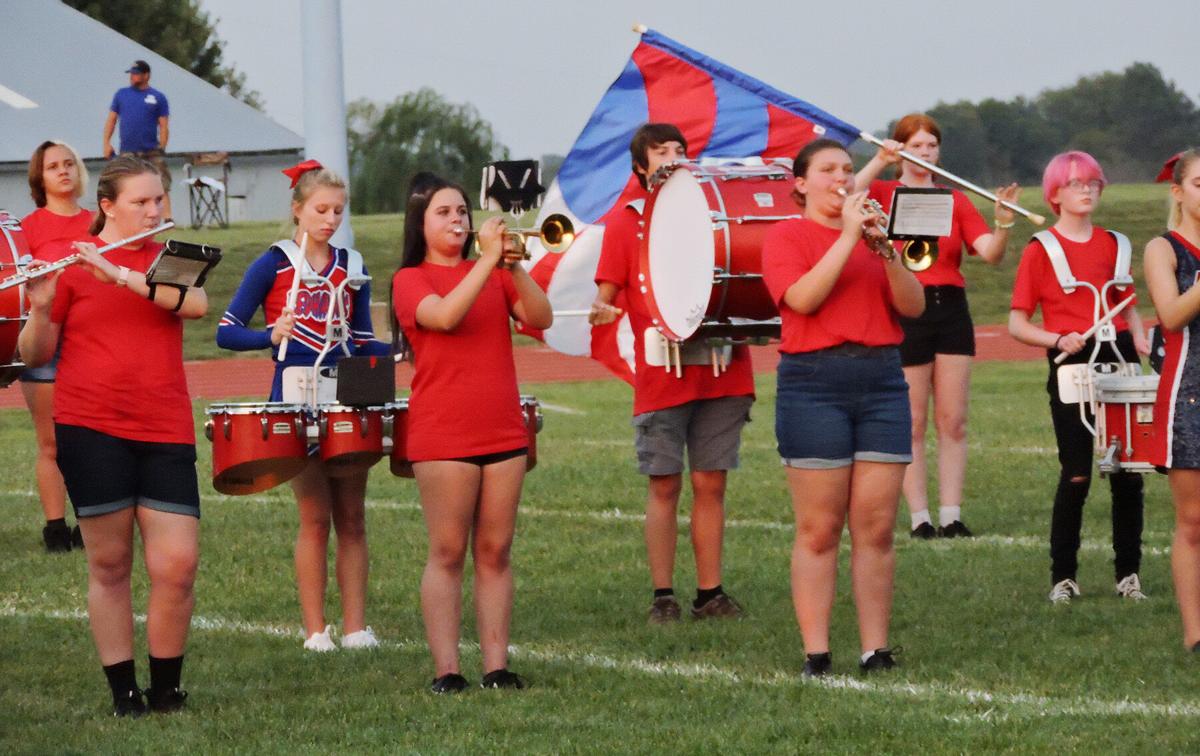 The Red Hawk Marching Band performed prior to the game Friday night. 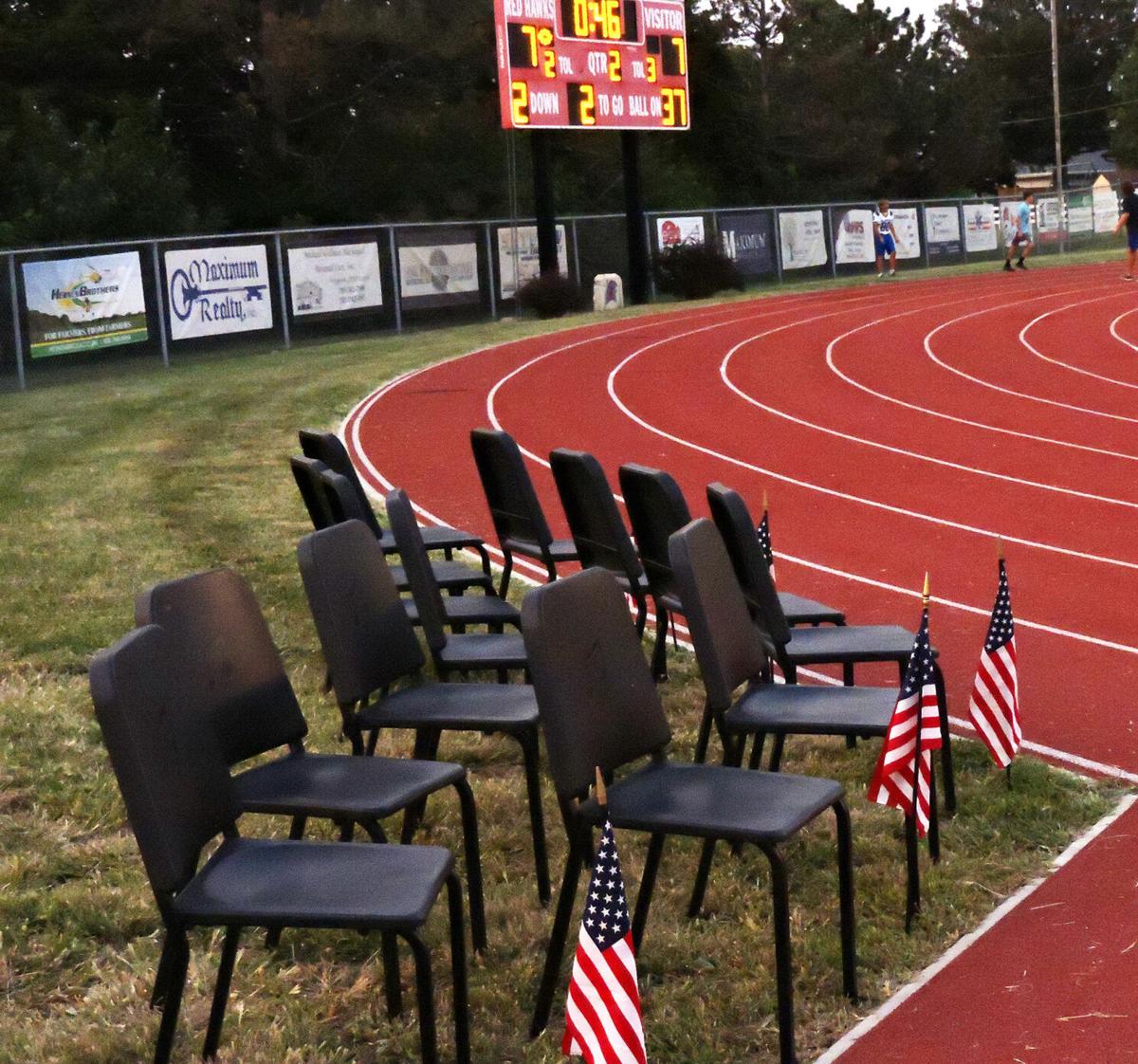 Thirteen chairs and American flags were set in a place of honor near the end zone at Friday's game to honor the 13 soldiers killed in Afghanistan. 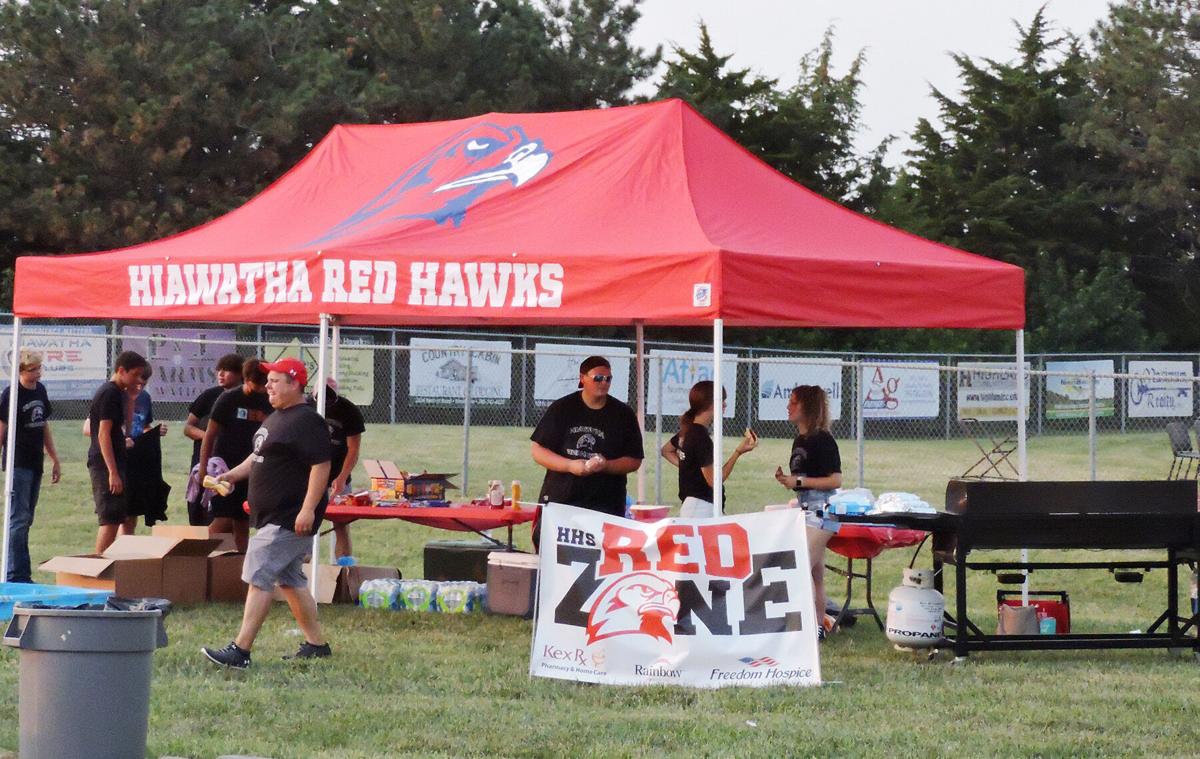 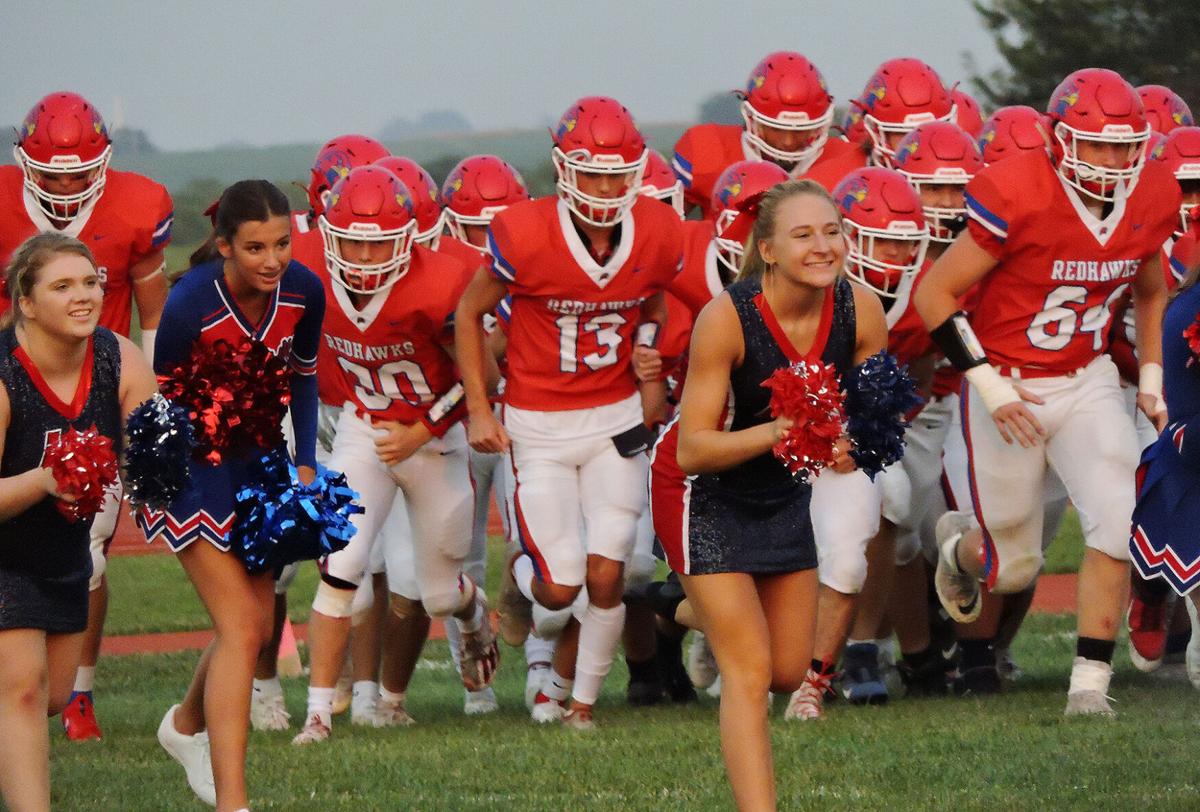 Tyler Davis dives for a first down in Friday’s home game against Perry-Lecompton.

The Red Hawk Marching Band performed prior to the game Friday night.

Thirteen chairs and American flags were set in a place of honor near the end zone at Friday's game to honor the 13 soldiers killed in Afghanistan.

The tide certainly turned this week for both teams in Friday night’s match up between the Perry Lecompton Kaws and the Hiawatha Red Hawks.

After Perry manhandled Jeff West a week ago and the Red Hawks fell in a low-scoring contest with Troy, the Kaws had to feel good heading into this week’s game, but Hiawatha flipped the script on the visiting team, overcoming an early deficit and holding Perry scoreless the rest of the way to earn what has to be the team’s signature win in the three-year tenure of Coach Mike Downard.

Hiawatha took the opening snap, but came up empty on their drive, which the Kaws answered by marching down the field and capitalizing with a short pass into the end zone to go up 7-0 with 1:41 left in the first quarter. But the Red Hawks responded with a long drive of their own, culminating in an 11-yard touchdown pass from Brandt Barnhill to Joel Bryan to bring things even at 7-7 at the 6:43 mark of the second. On the ensuing drive, Perry was able to move the ball a bit, but the Hawks firmed up, in what would be a recurring theme, turning the Kaws over with a 4th down stop to retake possession. Hiawatha would strike again before the half, scoring on a tantalizing 37-yard strike from Barnhill to Carson Gilbert, who was streaking down the near sideline. Gilbert gathered the ball in without breaking stride around the five yard line, and with a defender on his back and dove into the end zone to push the Red Hawk lead to 14-7 with 37 seconds to go in the half.

The teams battled back and forth in the third quarter without a score, but early in the fourth, with Hiawatha facing a 4th and long, Xavier Oldham drilled a punt that pinned Perry Lecompton at their own 11. After one big play out of the Kaw offense, Hiawatha stood tall again to force a punt. The Hawks began to move the ball back into Perry territory, converting a 4th and 1 on a quick quarterback sneak to keep the drive alive. Barnhill would then unleash a long run around the right end, pushing the ball all the way to 1 yard line. A penalty and a muffed snap would leave Hiawatha with a 2nd and goal from the 9, but it was Barnhill again keeping the ball on an option run around the right end and crashing into the corner of the end zone, where Oldham would connect on his third extra point of the night to push Hiawatha’s lead to 21-7 with 4:19 left in the game.

Perry would then go into hurry-up mode, completing short passes and moving the ball down the field, but the Hawks did an outstanding job of keeping Kaw receivers in-bounds and the clock moving. A pair of back-to-back pass interference calls put Perry inside the ten. But the Red Hawk coverage held up, yet again, as Perry failed to convert again and again, with their 4th down pass falling to the turf and sealing the 21-7 Hiawatha win.

Perry Lecompton entered the contest at #9 in the MaxPreps Kansas Class 3A rankings, and earned several votes for the KPreps top 5 3A rankings, after finishing runner-up in 3A state title game the last two seasons. The Red Hawks, now sitting at 1-1 on the season, will follow up their outstanding performance next Friday night as they are on the road to play the 0-2 Riverside Cyclones.